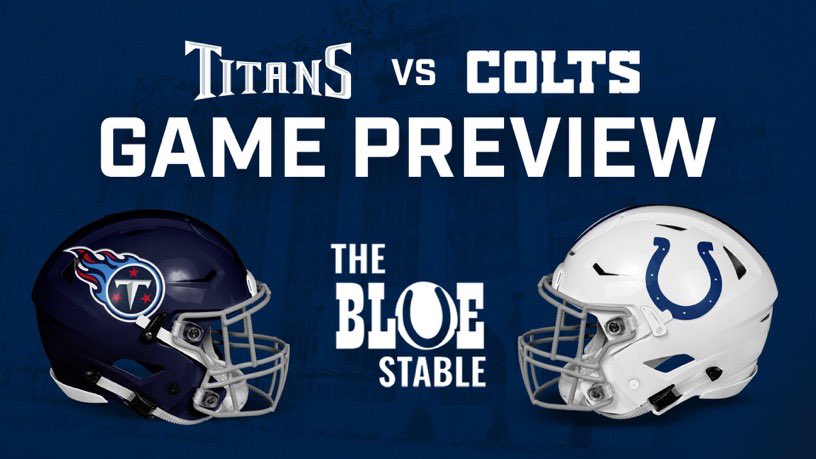 After a shaky start to the season, the Colts got back on track with a nerve-wracking, vital win against perennial Super Bowl contenders, the Kansas City Chiefs. At 1-1-1, the Colts are slightly ahead of the 1-2 Tennessee Titans who got their first win of the season on Sunday against the Las Vegas Raiders. Indianapolis were swept by Tennessee last year as they missed the playoffs and the Titans earned the number one seed in the AFC. The Colts need to win this game to get revenge and prove they can finally win the AFC South once again.

Can the Defensive Line win the Game?

One of the most important units for Indianapolis on Sunday will be their Defensive Line. Grover Stewart has clearly been the best player on the team over the past three weeks. He’s the only one who can be proud of his performance every game and is the main reason the Colts run defense has been so effective.

League-wide so far, rushing has been almost as efficient as passing.

#90 Grover Stewart has been playing like one of the best run defenders in the NFL so far in 2022 pic.twitter.com/W5pzXtfrRm

By contrast, the Colts pass rush had been sorely lacking in their first three games. Kwity Paye was impressive in gaining two sacks against the Texans, but DeForest Buckner and Yannick Ngakoue had been disappointing given the lofty expectations we had for them. Fortunately, they showed up in a big way against Kansas City.

Ngakoue got the team’s only sack, but that doesn’t tell the full story of the unit’s performance. The team racked up four Tackles for a Loss and five QB hits as they kept Mahomes under pressure and on the run. Frank Reich certainly liked what he saw.

Frank Reich: “I don’t think I’ve ever seen anyone rush Mahomes that well.”

Fantastic job by the defense today.

Indianapolis’ front four will have to play to a similar standard on Sunday, and they’ll have the benefit of playing against what should be a much weaker offensive line. Whilst Kansas City boasted Creed Humphrey, Joe Thuney and Orlando Brown, Tennessee will be without Taylor Lewan following his season ending injury. In his absence, their o-line will feature Dennis Daley,  Aaron Brewer, Ben Jones, Nate Davis and Nicholas Petit-Frere.

Tennessee’s O-Line isn’t elite, and the Colts pass rushers should be able to take advantage of it. Grover Stewart will once again have a key role to play. We know how important Derrick Henry is to the Titans offense. Not only does he rack up a lot of rushing yards himself, he forces defenses to focus on stopping him and unlocks their Play Action playbook. It’s no accident the only game Tennessee has won so far this year is one in which Henry easily had his best performance. But Stewart has been excellent in all three games this season. If he can shut down Henry in the rushing game (potentially assisted by Shaquille Leonard if he’s healthy enough to make his season debut), the Titans offense will have serious questions to answer.

A continued strong Colts rush defense would put far more pressure on Tannehill and the Titans’ unproven receiving corps (Robert Woods has proved he’s a great WR throughout his career, but it’s not clear how good he is following last year’s injury). It would also give Buckner, Ngakoue, Paye and co more freedom to get after Tannehill. Buckner racked up 3 QB hits when Indianapolis last beat Tennessee in November 2020. He could have a great opportunity to best that performance on Sunday.

Colts-Titans on Sunday, which means Jonathan Taylor vs. Derrick Henry.

In a league that’s shifting vertical, I wanted to know — just how far can a team go when its best player is a running back?

The data tells us there’s a ceiling: https://t.co/9Iu2uRMKoJ

Speaking of Derrick Henry, one of the most intriguing angles of Sunday’s game will be the latest skirmish in his battle with Jonathan Taylor to be recognized as the best Running Back in the league. To be fair to Henry, it won’t be a level playing field. You saw earlier how strong the Colts’ rush defense has been so far this season. The same can’t be said for the Titans.

This should be the game Jonathan Taylor really starts to go off this season, in the same way it took him a few games to get going last year. Taylor is just too good a running back for one of the worse rush defenses in the league to be able to live with. We saw what Saquon Barkley did to this Titans defense, Taylor has the potential to do even more damage.

As well as Henry played against the Raiders, he looked far worse than his usual self in the first two games of the season. Given his age and the serious injury he suffered last season, there have to be concerns amongst Titans fans that Henry is starting to regress.

Colts fans will have some concerns over Taylor’s usage causing injuries and regression in the years to come. But for the time being at least, Taylor should be at his physical peak and capable of returning to the form last year that kept him an MVP candidate for most of the season.

Should we be Worried about the Offensive line?

Taylor’s job would be made much easier if the Offensive Line could start producing the way fans expect. Quenton Nelson, Ryan Kelly and Braden Smith are too good and paid too much for the O-Line to continue to perform as poorly as it has this season. Although to be fair to Nelson, he has played well as he always does. It is Kelly and Smith that are underperforming, whilst new starters Matt Pryor and Danny Pinter have had their struggles.

There were some encouraging signs Pryor improved against Kansas City, but Pinter and Kelly got beaten far too often by the Chiefs.

Several questions today for Frank Reich on his struggling offensive line: "It’s all 11 guys," he says, pointing to some mental errors from guys not IDing/picking up rushes.

"We better be on point this week because this team can make you look bad," he says of the Titans.

The egregious pressure Matt Ryan has found himself under so far this season may not be entirely down to the Offensive Line, but they’ve certainly got to significantly improve their performance.

Colts coach Frank Reich on the offensive line issues his team's had this season: "There were more free rushers yesterday than I've seen in a long time against us."

Added that it was "discouraging."

Any lineup changes coming? Reich says that has not been discussed at this time

It’s not yet clear whether Indianapolis will decide personnel changes are needed on the O-Line. If Raimann is healthy, I wouldn’t be surprised if he started at Left Tackle and Pryor moved over to replace Pinter at Right Guard. There’s also Will Fries as an alternative option at RG.

Either way, the entire offense is going to have to address the issues that have caused the team to allow so many sacks this year. The good news is that if each aspect of the offense improves a moderate amount, there could be a significant improvement in the offensive line overall. The bad news is that players like Smith and Kelly have to put in extra work to justify their hefty contracts and once again make the Colts O-Line one of the best in the league.

One of the biggest issues the Colts’ offensive line had against Kansas City was letting rushers get to Ryan straight through the A gap. That’s never an ideal situation, but it’s a particularly bad idea when you’re playing Chris Jones. It’s not much better when you’re playing Jeffrey Simmons, as Indianapolis will do on Sunday. They’ll have to address their communication problems and any other issues if they want to keep Ryan upright and their offense moving the chains.

The Colts’ offensive line will have an easier job than they might otherwise have had given Harold Landry’s ACL injury just before the start of the season. Tennessee still has ex-Colt Denico Autry and Bud Dupree alongside Simmons, but Landry will continue to be a big loss for them. That said, it’s still a critical matchup for a Colts O-Line that has played far worse than they should have on paper so far this year.

What impact will Colts Receivers have?

This is the first third down of the game for the Colts. They have superstars at left guard and center and a QB who has seen everything. How do you let a free rusher run up the A-gap? Not the only time this happened in Week 3, either. pic.twitter.com/fcmI5hmbzx

Sunday was a big day for the Colts’ young skill players. Jelani Woods rightfully received most of the plaudits for his two touchdown performance. But Alec Pierce also had a good day. Facing questions about his receiving corps throughout the offseason, Chris Ballard expressed confidence in his players but emphasised they were going to have to adjust to the NFL quickly. Sunday was an encouraging sign they have begun to take those necessary steps.

Michael Pittman will continue to be the Colts main receiving threat by some distance providing he remains healthy. But having more talent around Pittman than the Colts had last year would make a huge difference to their passing attack and the attention he receives from defenses.

The Titans’ secondary was carved up by Buffalo in week 2, with Josh Allen throwing for 317 yards and four touchdowns in a dominant 41-7 victory. Derek Carr was less successful against Tennessee on Sunday, but was still able to throw for 303 yards and two touchdowns. The unit should be healthier this Sunday than it was against Vegas, but Matt Ryan should nevertheless have opportunities to beat Tennessee through the air.

Divisional games are usually close and I expect this to be no exception. That being said, I do expect Indianapolis to exploit Tennessee’s injury woes to secure the win and throw down a gauntlet in the fight to win the AFC South. I’ll go with 27-20 to the Colts for the final score.