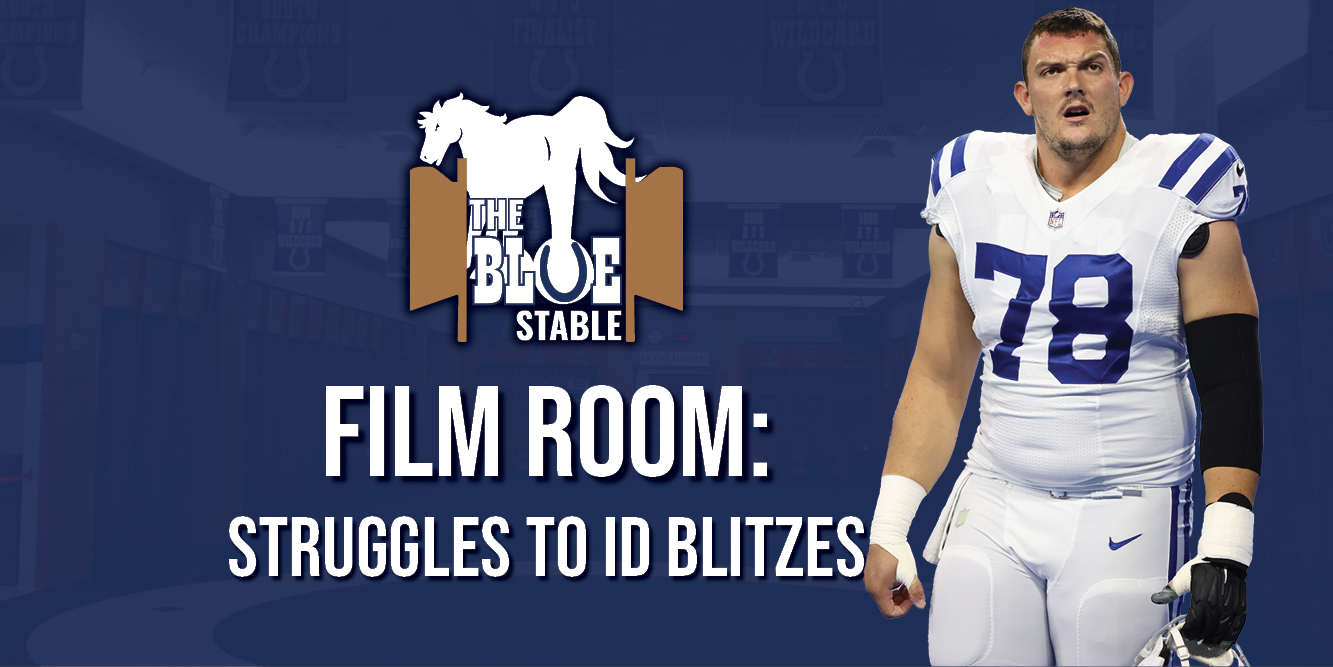 Hot Take: Free Rushers to the Quarterback are Bad

I know, I know. Shame on me for being Skip Bayless-esque with my hot takes to start an article.

To be fair, my bold analysis is shared by at least one notable member of the Colts staff:

Several questions today for Frank Reich on his struggling offensive line: "It’s all 11 guys," he says, pointing to some mental errors from guys not IDing/picking up rushes.

"We better be on point this week because this team can make you look bad," he says of the Titans.

Discouraging is a light way to put it. Of course Reich wouldn’t want to throw any of his players specifically under the bus, but the frustrations are clearly there. Protecting your QB from pressure is one of the cornerstones his offense was built on, and through 3 weeks of the season, that cornerstone has eroded.

The quickest way for a QB to feel pressure in the pocket: A miscommunication on blocking assignments. Unfortunately the Colts suffered several of these blunders vs the Kansas City Chiefs this past week. Outside of screens which are designed to allow penetration in the pocket, how many times did an untouched pass rusher get into the backfield? Who was to blame for these miscues?

On the 1st drive of the game, Chiefs Defensive Coordinator, Steve Spagnuolo, dialed up 2 separate Corner blitz plays that got a free rusher on QB Matt Ryan.

Free rushers via Blitz were a problem from the start for Indy.

Causes Ryan to throw to the wrong shoulder of JT in the flat. If Taylor catches that, prob good gain pic.twitter.com/tgqtS8CM1X

For the first play of the game, Spagnuolo disguises a blitzing corner, Jaylen Watson, as a pressing corner on Michael Pittman Jr. By doing this from the get go, Spagnuolo establishes to Ryan that pressure could come from the outside with someone lined up in coverage on his top wide out. While it doesn’t result in a sack or QB hit, the 6’2 rookie was able to pressure Ryan enough to throw to the wrong shoulder of Jonathan Taylor in the flat. Taylor should have caught it, but this slight alteration was a difference in Taylor having a chance to get a nice gain.

Both Granson and Pittman were running routes, and Granson wasn’t asked to chip before releasing into his due to the play design. Left Tackle Matt Pryor was already locked up with Karlaftis on the edge. Star running back Jonathan Taylor could have maybe caught the ball, and Ryan could have thrown it more accurately in an ideal world. There was no assigned pickup blocker due to the play design and the lack of Watson showing blitz caught everyone off guard. It was a well designed play by Spagnuolo with little the Colts could have done protection wise. Barring Frank Reich calling a different play or Matt Ryan audibling, this play’s success would hinge on Ryan’s ball placement and Taylor’s hands in reaction to Spagnuolo’s free blitzer.

2 plays later, 7 men show blitz on 3rd and 5. Only 5 rush, w/ Reid & Sneed knifing right through the A & B gaps on the left side while Karlaftis & Bolton drop back into coverage.

The stacked weakside blitzes give a free shot at Ryan immediately. No time for any progressions. pic.twitter.com/esD5OQMLi2

Either Ryan should have slid protection to account for the unbalanced rush. The blitz was shown, but the dropping back into coverage was not on the other side. Either Kelly thought Reid would drop back into coverage in the middle or that Nelson would pick him up, and moved to help block DT Tershawn Wharton. Pinter engaged with Wharton, and Kelly ended up leaving Reid untouched through the middle of the line. The main pressure got through Kelly’s gap so he bears responsibility, but he also could have had the responsibility to ID the blitz. If Blitz IDing was more on Matt Ryan’s shoulders, then he also bears some weight for the failed pre-snap read.

This one might have been an early TD play, but Pinter allowed a free shot on Ryan by DT Khalen Saunders

Not exactly a failed blitz pick up, but still an untouched defender right up the A gap to leave a hit on your QB. Thankfully well designed route concept for a quick TD read… pic.twitter.com/zI8GKE2cK8

Ball State alum Danny Pinter thought Khalen Saunders would be blocked by Ryan Kelly. Instead, Saunders got no blocker and a free lick at the Iceman. If the Chiefs secondary was tighter in coverage, Ryan would have needed a second read. He wouldn’t have had any time for it, likely resulting in a sack or incompletion on 3rd & Goal.

Another CB blitz by Sneed, now ar the weak/right side.

JT is put in no win situation pass pro w/ Reid & Sneed at both Ds & Bolton patrolling inside pic.twitter.com/2Am9ucmMXo

The pass protection plan here was well executed against all of the expected potential rushers. However another disguised Corner blitz surprises and this one hits home. Matt Ryan needed to release quicker to hit an open Parris Campbell over the middle to convert the 4th & 1.

In hindsight, calling a play action from the shotgun on 4th and 1 was very risky, especially with the Chiefs blitzing. While there was an open man, the play call could have been a simple run with Taylor or a QB sneak. Reich simplified things later on other 4th and 1 attempts with mixed results. But that lesson was learned after this devastating turnover.

Bolton Right Up the A Gap

In the series before this play, Pinter got pancaked by Frank Clark. Q gets revenge, but Kelly feels the need to help Pinter instead of recognizing Bolton’s blitz in the A gap.

Bad miscommunication by Ryan/Kelly on IDing the blitz. Easy sack as a result on 3rd & 6. pic.twitter.com/WqeNxZnZJM

Another play, another free rusher up the A gap on 3rd Down. Nick Bolton gets free reign up the middle and makes Matt Ryan pay with a sack. Whoever is in charge of identifying the blitz made another mistake. Matt Ryan could have thrown the ball away, but on 3rd down deep in enemy territory wanted to make a play. Thankfully, Chase McLaughlin was able to nail the 51 yard Field Goal immediately afterwards.

Another disguised blitz, this time from S Bryan Cook in the slot. Reid & Bolton blitz each B gap, while Cook shoots through the B gap after Reid.

Matt Ryan spins out of it, but can’t get a throw off as Pinter & Hines lost to Bolton’s blitz by then + Chris Jones gets by Braden pic.twitter.com/eZO8HdY5Sc

Pinter has been a liability so far in the game. Nyheim Hines knows this, and looks to help him with Linebacker Nick Bolton. If Hines had more of a reason to feel confident in Pinter, he would have been able to stay on the left side and attempt to protect Ryan from Cook. Both Hines and Pinter failed to block Bolton for long, and Cook got his shot at Matty Ice.

At this point, Spagnuolo decided to truly bully Danny Pinter. The play call lured Braden Smith’s attention away from Reid blitzing by having Karlaftis out wide in a two point stance to rush. Instead of a rush though, it is a disguised drop back into coverage. With Bolton suddenly shifting gaps at the last second, Pinter is now all alone versus two blitzers on either shoulder. He chooses to take on the inside man Bolton, but now Reid is running home free at Matt Ryan.

Even if the Colts successfully picked up the B & C gap blitzes attacking Pinter, Harris still had a free shot, albeit slightly later. Colts failed to ID all the blitzers in time. Well designed play by Spagnuolo at the end of the game. Credit to Matt Ryan for getting the ball out immediately to Alec Pierce, however the defense did just enough to affect the ball placement and make it a tougher catch attempt for Pierce, resulting in an incompletion.

With 7 total Free Rusher plays, the Colts front was thoroughly befuddled at various points of the game. There is blame to go around on the Colts, but also credit Steve Spagnuolo’s defense for perfectly executed blitzes in key moments. These types of rushes tend to be infrequent, but often can lead to disaster for an offense. Against the Chiefs they resulted in 3 sacks, 1 Fumble, and 3 Incompletions.

Those two things are true, and what it means for Indy's pass protection going forward: https://t.co/1VN2pxG39l

The Colts coaching staff has had a lot to discuss with the front about this game. Offensive Line Coach Chris Strausser has to help get Matt Ryan and Ryan Kelly on the same page in their blitz IDs. In turn, they need to be able to relay this information to the rest of the line, who have to understand the message and get the assignment. Free rushers are the result of either a schematic and assignment based mistake. Adjustments are needed, but if the Colts can clean up these mental mistakes, the offense will be in far better shape.