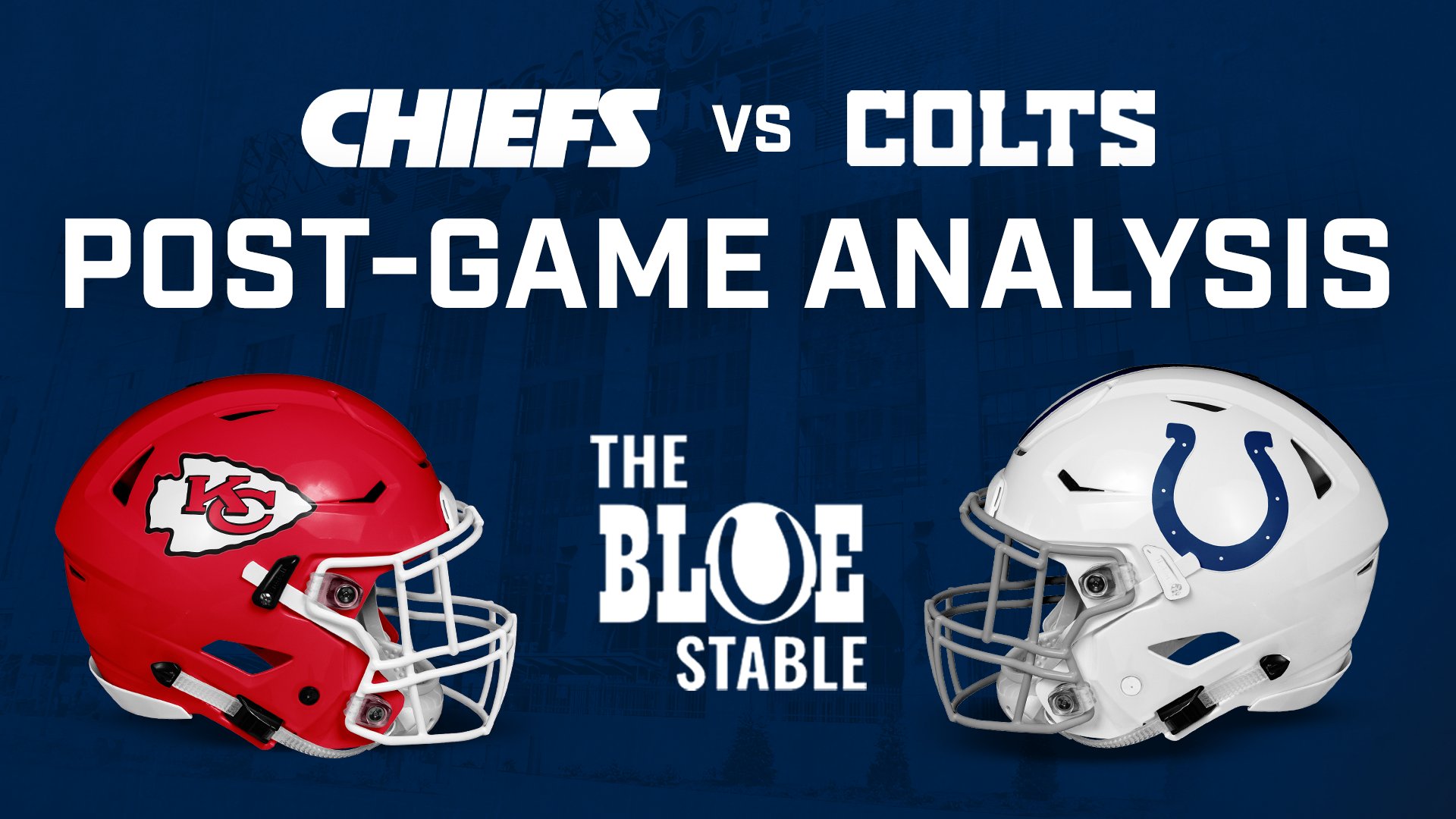 It wasn’t pretty like a Miss Universe Pageant, but the Indianapolis Colts did what few analysts expected: beat the Chiefs. In fact not a single NFL Network analyst predicted this result, with several calling Chiefs over Colts their “Lock of the Week”.

For now, let the Colts take a victory lap like they are in the Indianapolis 500. Despite going against the consensus toughest opponent thus far in the schedule, the Colts pulled one out 20-17.

The news of Yannick Ngakoue & DeForest Buckner’s demises was highly exaggerated. Both of the Colts’ top veteran pass rushers had a field day against the Chiefs vaunted front. Ngakoue in particular got consistent pressure against Orlando Brown Jr. on the left side, forcing Mahomes to step up or slide out of the pocket throughout the night.

Beyond those two, there were also flashes of pressure from Kwity Paye, Grover Stewart, and Dayo Odeyingbo. While the unit as a whole only finished with one sack on the night, the pressure was consistent throughout. If the front four can continue to get pressure on opposing QBs, the sacks will come in bunches, especially against worse escape artist passers than Mahomes.

Michael Pittman Jr’s return gave the Colts their most consistent passing weapon back, but his dynamic big play potential was limited on Sunday. MPJ only had 9 yards per catch, a far cry from his average of 12.5 for his career. Instead some of the biggest catches of the night came from a pair of rookies: Cincinnati’s Alec Pierce and Virginia’s Jelani Woods.

What a throw… what an even better catch by the rookie Alec Pierce! pic.twitter.com/hX9Wg2GOI3

Alec Pierce in his return from the concussion protocol that kept him out of week 2 only caught three passes. However, he averaged over 20 yards per catch, with each of his catches good for a first down. This includes the gorgeous 30 yard contested catch above.

Jelani also didn’t have a high volume role as well, but likewise to Pierce, he made his catches count today. While Woods didn’t have the big yardage plays downfield that Pierce specialized in, he did convert 2 RedZone catches into touchdowns, including the game winning one.

#Colts rookie Jelani Woods, who grow up in the Atlanta area:

“All of my family back home, I know they’re going crazy right now. Just growing up (watching Matt Ryan) and having that moment of winning a game (by) catching a pass from him, that was just a dream come true.”

Both rookies came into their own today, and their impacts were critical for the Colts to win.

Gus Bradley has gotten a decent amount of flak for his past coaching experience against Patrick Mahomes. I myself stressed the importance of Bradley adjusting his scheme and personnel to better matchup against Mahomes as one of the Keys to the Game. So let’s give credit where credit is due: Bradley adjusted and had a big part of the Colts win.

3 weeks into the season #Colts DC Gus Bradley has allowed 0 points in each 4th quarter so far through 3 games. One of them holding Mahomes to 0 points.

Even though this unit has had its hiccups. That’s a great improvement from the previous regime.

Bradley changed up the lineup in a few critical ways. Dayo Odeyingbo got a bigger role in run downs, helping to suffocate Clyde Edwards Helaire to 0 yards rushing after CEH averaged 7.7 yards per carry in the first 2 weeks. Isaiah Rodgers got the start at CB3 ahead of Brandon Facyson and performed very well. Rodney McLeod got the start at Safety over 3rd round rookie Nick Cross, and once Julian Blackmon went out with a knee injury, Bradley surprisingly chose to place 7th round rookie Rodney Thomas II instead of Cross into the starting lineup. McLeod did a solid job at limiting the deep ball as a solid veteran safety, getting the game sealing pick in the process, while Thomas II had an essential pass breakup deep once he entered the lineup.

RODNEY MCLEOD PICKS IT OFF TO SEAL THE GAME FOR THE COLTS! pic.twitter.com/E47nL5l7tB

With a stifling run defense, changes in personnel on the back end, and a more consistent pass rush, Gus Bradley’s Defense held the elite Chiefs offense to only 17 points. Safe to say his leash has gotten longer now, time will tell if further adjustments are needed to the Defense.

Matt Ryan was far from a perfect QB today (more on that later), but when it came to crunch time, he came through. For the first time since December 20th, 2020: a Colts QB led the Colts on a game-winning drive.

While he didn’t throw any picks, Ryan’s 2 fumbles gave the Chiefs excellent field position to capitalize on. His seven fumbles through three games now lead the NFL. However beyond those fumbles, Matt Ryan was dealing despite some tough situations. He was sacked five times, but still had a 73% completion percentage, had a passer rating over 105, and threw two TDs.

Frank Reich: “I’ve been around a lot of great ones. But as far as guys that are on to the next play, Matt’s as good as anyone I’ve ever been around.

As I said, perfect? No. But good enough, especially when we needed it the most? For Sure.

The Colts offensive line heading into the game was under fire for brutally bad pass protection. Anyone hoping for answers to emerge versus the Chiefs today was in for a rude awakening. For a highly compensated unit, the Colts are not getting their money’s worth from several key linemen so far.

The story of this season continues to be a highly-paid Colts offensive line not coming close to living up to its billing.

Ryan’s fumbling issues, it should be said, are compounding the problem.

While Matt Ryan was able to overcome the pressure by the end of the game with crisp, quick passes; the Colts OL made it much harder on the vet QB throughout the game. Ryan was sacked five times, losing 45 offensive yards, and had the aforementioned two fumbles because of the constant hits and pressures.

The Colts’ offensive line isn’t the worst in the league on paper, but in terms of play quality through the first three weeks of the season? Tough to think of one worse.

Most distressingly, the Colts front struggled to pick up blitzes. Throughout the game free rushers were getting to Ryan within a second of the ball being snapped, often on critical passing downs. While some like Danny Pinter, Braden Smith, or Matt Pryor struggled at their one on one blocks, the blame for free rushers can fall on the feet of several individuals. From veteran Center Ryan Kelly calling protections on the field, to OL Coach Chris Strausser’s mentorship, to potentially Matt Ryan himself at the line. Someone needs to take accountability for the free rushers and fix the issue. Elsewise jobs will be on the line, as those mental mistakes frequently happening will lose most games, or risk Ryan’s health.

The Chiefs entered the week with a Top 10 rushing defense, holding the Cardinals and the Chargers to 89 rushing yards a game and 3.9 yards a carry. Jonathan Taylor was going to be the focal point of the Chiefs Defensive focus, especially after his 2021 rushing title and his electric 5.3 yards per carry and 215 rushing yard to start the 2022 season

Jonathan Taylor is #1 in negative run plays this season (5).

Colts OL is the highest paid in the league.

They need to pick it up😬

The Chiefs Defense held firm on the ground, stuffing JT for his worst rushing game of the season thus far: 21 carries, 71 yards, 3.4 yards per carry, and no TDs. While Taylor did make more of an impact through the air (3 catches for 20 yards on 3 targets), as well as use the Play Action later to get better downfield separation and time to throw, the Chiefs were able to knife through the Colts OL via blitzes to stop Taylor.

It’s not just the pass blocking, not that this is any great revelation.

Despite the Chiefs limiting the Colts best offensive player on the ground, the Colts pulled off a victory. While there is plenty to celebrate, the Colts need to clean things up in both pass protection and run blocking.

A win is a win is a win. The Colts were a flawed team, yet still pulled of one of the biggest upsets of the season so far. Despite a lot of outside noise after the tough tie against the Texans and the devastating loss to the Jaguars (including some calling for the firing of Reich and Ballard), the Colts were able to adjust and patch up some of their weaknesses and get a Home Opener win against Patrick Mahomes and the Chiefs. This is the type of win that can fire up a team and turn seasons around.

Matt Ryan gets his first win as a Colt. The team is only a half game behind the Jaguars for the lead in AFC South divisional race. We could see the return of Shaquille “The Maniac” Leonard soon. Ultimately, the Indianapolis Colts are far from perfect, but with further personnel adjustments (particularly up front) and fixing coachable mistakes, the team could enter into the thick of the AFC playoff race. 1-1-1 might not have been the start Colts fans envisioned for the first 3 weeks of the season, especially in which games have which results, but it isn’t that far off from most projections.

There is still more to clean up, but maybe, just maybe, the team got their swagger back.