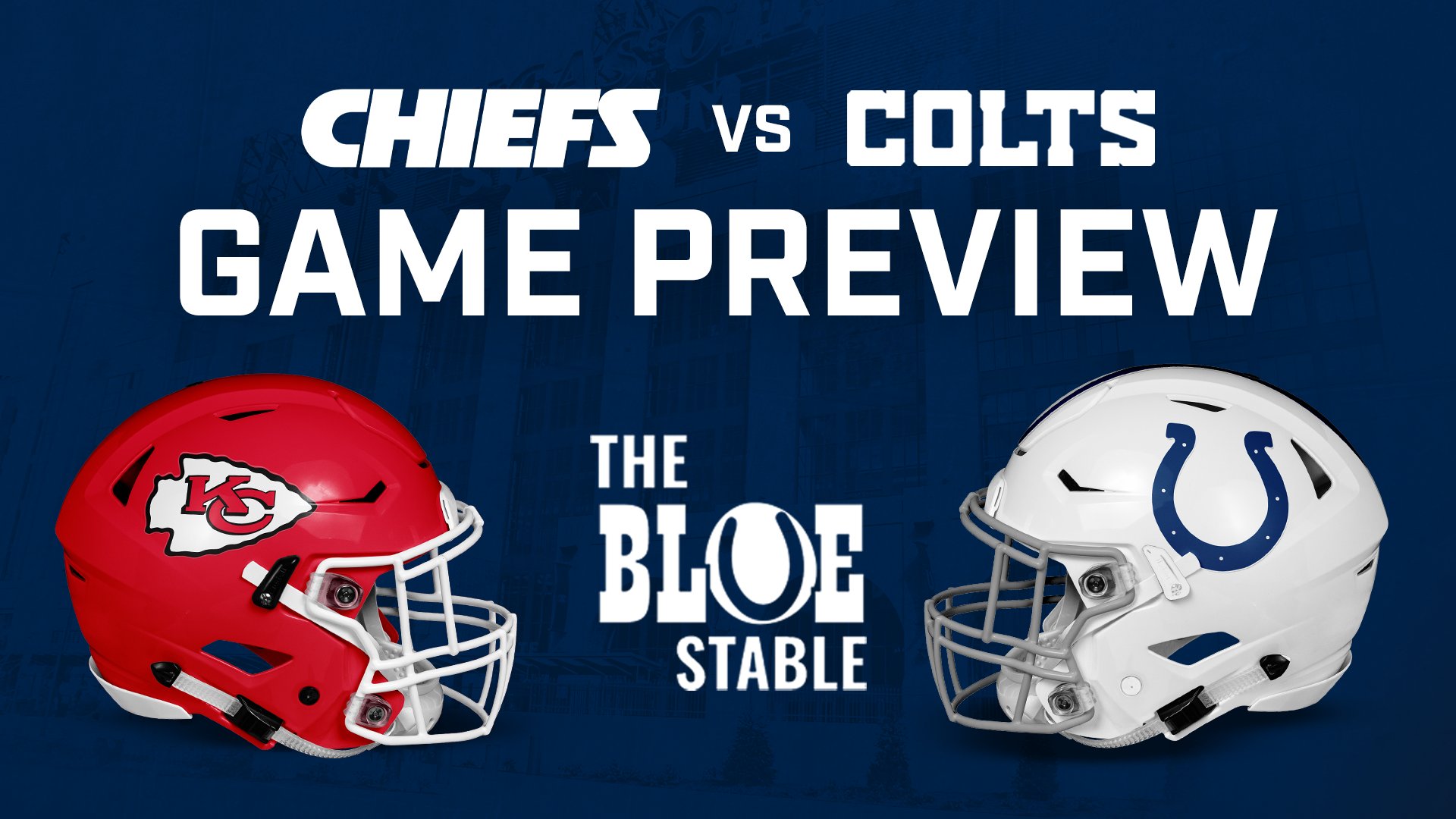 The Indianapolis Colts head back to the Circle City for the first time this season, making their home opener versus the undefeated Kansas City Chiefs. The Colts are 1-1 against Patrick Mahomes, with 1 victory in 2019 against a shorthanded Chiefs Offense, and a playoff loss in the 2018 Divisional round. However much has changed on both teams in these last 3 years. With the Chiefs dominating thus far in the season, this likely will be the Colts toughest challenge so far in 2022.

Is the Horseshoe Past Curse-Related Struggles?

Football is both a game that contains the fruits of one’s hard fought labors, and of luck. As of late, the Horseshoe hasn’t had much of the latter this season. Whether you are a superstitious person or not, these past 2 weeks brought a pair of harsh realities to two of the Colts worst streaks:

As week 3 vs the Chiefs represents the first “non-cursed” game on the Colts schedule, perhaps they will begin to perform closer to expectations. While few of even the most optimistic fans expect the Colts to emerge victorious, having a surprisingly competitive game against a contender caliber team like the Chiefs might be enough to begin to build momentum into this season. For a team named after an object associated with good luck, luck’s favor can be a tricky thing to maintain.

The Return of the Receivers

The Colts injury report has had some mixed news for Matt Ryan. One the one hand, Bernhard Raimainn is out this week, taking away a potential blindside pass protector for Ryan as Raimann is competing with Matt Pryor for starting snaps on the left side. On the other hand, Michael Pittman Jr. and Alec Pierce should be back in action this week.

Last week in Duval, the Colts remaining Wide Receivers struggled mightily with getting consistent separation. Ashton Dulin had his moments, but beyond him the rest of the receivers failed to impress. Now the unit is boosted by the return of their top weapon in MPJ, and could see additional impact from rookie Alec Pierce as well. Should Pierce begin to show flashes himself, this WR corps could begin to look more dangerous going forward.

Former Chargers and Raiders Defensive Coordinator Gus Bradley has had a lot of experience versus Patrick Mahomes over the years as a division rival. Now he gets to scheme against him again in his first year outside of the AFC West during Mahomes’ career as a starter.

Catch an all new “Ferrall Coast to Coast” at 3ET/12PT on @SportsGrid, @SportsGridRadio & @SIRIUSXM Ch. 159!! pic.twitter.com/j5G4lmy5zB

However, the Colts’ DC’s familiarity with Mahomes isn’t necessarily a positive. Quite the contrary actually, as Mahomes has done very well against Gus Bradley’s scheme. With the Colts Defense under Bradley being the most Cover 3 reliant in the NFL so far in 2022 and Mahomes being one of the best QBs against Cover 3 coverage, Bradley should change things up if he wants to confuse and have success against Patrick Mahomes.

Patrick Mahomes has played Gus Bradley defenses about like he has everyone. He has a 108.5 rating against Bradley and a 106.5 against the league.

The Chargers held Mahomes under 200 yards twice but the Raiders gave up 40+ points twice. https://t.co/cYZ8ypABcl

Beyond the defensive play call changes, Gus Bradley could be due for some personnel changes. Promising 3rd year cornerback Isaiah Rodgers Sr. could be one of those changes, as after having a breakout year last year he has been unable to get a single defensive snap so far in 2022. Former Raiders CB Brandon Facyson has been taking the CB3 snaps thus far in nickel looks, but has not done particularly well. Gus could look to go for a less familiar but higher upside player in Rodgers to match up with the highly athletic Chiefs WRs.

If Gus Bradley intends to keep to the status quo for his defensive scheme and personnel, it could be another high scoring affair for Patrick Mahomes’ passing attack.

Keep Mahomes on the Sideline

Limiting Mahomes’ impact on the game will be essential for the Colts success versus the Chiefs. One way they could do so is by having long, sustained, time chewing drives that have a high TD rate. This would enable the defense to be well rested, along with limiting the scoring opportunities for Mahomes overall. One of the best ways to do so is by having a strong ground attack.

Lots of talk this week about Colts RB Nyheim Hines not getting enough snaps/touches vs. the Jags.

But what I think hasn’t been addressed enough is the 9 carries for Jonathan Taylor. Week 1 proved what can happen if you stick w him. He turned good runs into BIG runs late. 1/

This strategy was employed many times against Colts legend Peyton Manning, and while it didn’t always work against an elite talent such as Manning (see his win vs the Dolphins in 2009 with under 15 minutes of Time of Possession, an NFL record low), it was instrumental in several of Manning’s biggest upset losses. Thankfully the Colts have a back capable of dominating on the ground to help make that process easier.

Matt Ryan is a great QB and he can still make plays. But he’s going to need help if the Colts are going to win. They have to get Jonathan Taylor going consistently so opposing pass rushers can’t tee off. There has been too much pressure on Ryan these first two games.

2021 rushing leader Jonathan Taylor will be instrumental in this strategy. Taylor is averaging 5.38 yards per carry so far this season, but will have a tough task against a Chiefs run defense allowing 2.9 yards per carry thus far. Offball Linebacker Nick Bolton especially has stepped up, flying to the ball with 20 tackles in the last 2 weeks. Should the Colts establish the run effectively, they will have a better shot at beating Mahomes than trying to outduel him.

The biggest individual mismatch on the field likely will be Travis Kelce today. The Colts linebackers have struggled in coverage so far this season while missing Darius Leonard’s playmaking abilities. EJ Speed and Zaire Franklin in particular have been picked on in coverage, most heinously miscommunicating with the safeties zone to allow 2 easy TDs to OJ Howard week 1 on vertical routes. Safe to say the Colts LBs will need to be on their A game today.

fun design from the Jaguars shifting Christian Kirk from the backfield to the weakside slot and creating an Empty formation.

Travis Kelce also likely will have matchups in the Colts Zone Heavy Cover 3 Scheme with several secondary members. Kenny Moore II, Julian Blackmon, and Nick Cross will be tested both vertically and horizontally against Kelce. Communication between the secondary and linebackers will be critical, as wide open coverage against Kelce will surely be punished.

Quenton Nelson might be one of the few bright spots during the Colts rough start up front. The 3x 1st Team All Pro Guard has done well in both pass protection and run blocking thus far. However he faces his toughest matchup potentially vs Chris Jones.

Five players had 5+ hurries in Week 1

THREE of them were @Chiefs

Jones has long been considered one of the best non Aaron Donald DTs in the NFL. He is coming off of a monster performance against the Chargers where he produced 2 tackles for loss, 2 QB Hits, 2 sacks, and a critical pass deflection. As the Chiefs best pass rusher, it is critical that the Colts neutralize him to give Matt Ryan a clean pocket to step into. Chris Jones likely will move around the line to take advantage at other spots as well, so we could see him have tough battles against Ryan Kelly or dominate Danny Pinter, or stunt to the outside against the Colts tackles from time to time. However whenever he lines up against Quenton Nelson it will be a battle for the ages.

Chiefs are 5.5 point away favorites vs the Colts for today’s game according to DraftKings.

The Colts enter the game as heavy home underdogs for good reason. The Chiefs Offense has been a well oiled machine, and the Defense has looked surprisingly strong despite some offseason losses. Whereas the Colts have tied and gotten blown out to two of the projected worst teams in the NFL heading into this season. The Colts have struggled to protect Matt Ryan, and the Defense has struggled to pressure QBs, most egregiously only pressuring Trevor Lawrence last week on 10% of his dropbacks.

If the Colts show up in Indy as lethargic as they have been the last 2 weeks it will be a long day. Bradley needs to make adjustments, Matt Ryan needs to motivate and get everyone on the same page in the offense, the protection and receivers need to step up especially, the pass rush needs to pressure Mahomes consistently, and the Colts secondary needs to be on point against the Chiefs vaunted passing attack. It would also help to not miss major field goals or kick kickoffs out of bounds, though those situations might have been remedied post week 1.

The Colts have to consider making some changes to the starting lineup going forward.

From actually playing Isaiah Rodgers Sr to shuffling the OL a bit, here are 5 potential adjustments the team could make: https://t.co/irYal4Ix02

If and only if the Colts make adjustments and have several key players bounce back, the Colts will make this a competitive ball game and have a chance at victory. If they look similar to how they have been thus far in 2022, it will be a long day for Colts fans at home.

I predict we will see the Colts take a step forward in some areas, yet still struggle in some others. I have reservations still about the Colts LT and RG starters at the moment. I have doubts in Gus Bradley’s willingness to change things up, which will put our defensive personnel in tougher spots. And I am hesitant to be optimistic the Colts will get pressure after last week’s performance and Yannick Ngakoue dealing with an injury. If any or several of these 3 concerns are assuaged then the Colts have a shot.

DeForest Buckner and Yannick Ngakoue have combined for 0 sacks, 1 QB hit and 4 QB pressures so far this season.

Colts need their vets to play up to their contracts.

However I predict the Colts will take a step forward in their confidence in their passing weapons. MPJ will be his reliable self as the top WR. Ashton Dulin showed some promise in his absence and might have earned a bigger role. I am still high on Alec Pierce and am excited to see him develop. Nyheim Hines should be utilized well out of the backfield or in the slot. And Jonathan Taylor will remain an all around dynamic weapon through the ground and air, especially if he gets some space. If they can get quick early separation, it should help Matt Ryan even if he is under pressure.

For today’s Preseason game against the Bills, let’s remember last season where Jonathan Taylor scorched the Bills defense for 5 TD’s in a blowout victory. pic.twitter.com/CT1Jq0iWXY

This game has blowout potential, and not in a good way. But in the craziness that is football this season, anything can happen. I wouldn’t put money on an upset Colts victory, but if the Colts find their groove they have the potential to beat a few contenders.