Derrick Henry has laid claim to the title “King” among RBs, but this year, Jonathan Taylor  is making a claim for his crown.

Jonathan Taylor is having a monster of a season, one of the greatest in Colts History. On a Franchise with 4 Hall of Fame RBs such as Lenny Moore, Eric Dickerson, Marshall Faulk, & Edgerrin James on its Mount Rushmore of Backs, that’s high praise. Taylor is even getting MVP buzz as a running back, an award that hasn’t been given to an RB since 2012 Adrian Peterson. Heck, no RB has even received a single MVP vote since Todd Gurley in 2017.

However, there is a contingent of fans who are less than enthused about the hype of Jonathan Taylor. They believe that another RB has been passed over in recent years for MVP hype, who has received 0 MVP votes in his prime years due to historic seasons of QB production, relegating him only to receive an Offensive Player of the Year in 2020. Many said it was too soon earlier for Taylor to claim the crown due to him not playing 16 games as Henry did in 2020. But now that Taylor has reached 16 games player (with one more left thanks to the NFL’s extended regular season in 2021 onwards), there is truly enough of a season to compare Taylor to Henry.

The Henry Royalist contingent is a minority in the NFL landscape, most of whom belong to the 31st biggest Fanbase in the NFL (according to Twitter analytics), but a vocal one at that. Below any mention of how good Jonathan Taylor is, you will likely find this small minority praising their King Henry as the true best RB in the NFL. Due to a major injury, Henry will not be represented in any awards or All Pros this year. Still, his accomplishments, especially during the 2020 season, have established him as one of the best RBs in recent memory & the most dominant force on the ground from 2019-2020.

The question remains: who wears the RB crown?

For the 2021 season, the answer is obviously Taylor, but the Henry royalists insist that is unfair due to his current Jones fracture forcing him to miss two months. Career-wise, Henry would have the clear edge of the two, though Taylor loyalists would claim that is unfair as Henry has played four more seasons and 55 more games in his career due to Taylor only just entering the NFL in 2020. Comparing the first 2 NFL career seasons is unfair, as it is very outdated data for Henry (2016-2017) before he took a full-time starting job.

The best way to evaluate each player’s claim to the RB crown: compare their best seasons so far. Since Henry’s was just last season in 2020 & Taylor’s is this year, both are recent enough to jockey for the throne. It isn’t enough just to look at a handful of select stats without any context in this comparison. That is why with the help of Pro Football Reference, NFL Next Gen Stats, Pro Football Focus, Football Outsiders, & Player Profiler, we have compiled a grand 39 different RB stats to evaluate both players to see who truly is the King. 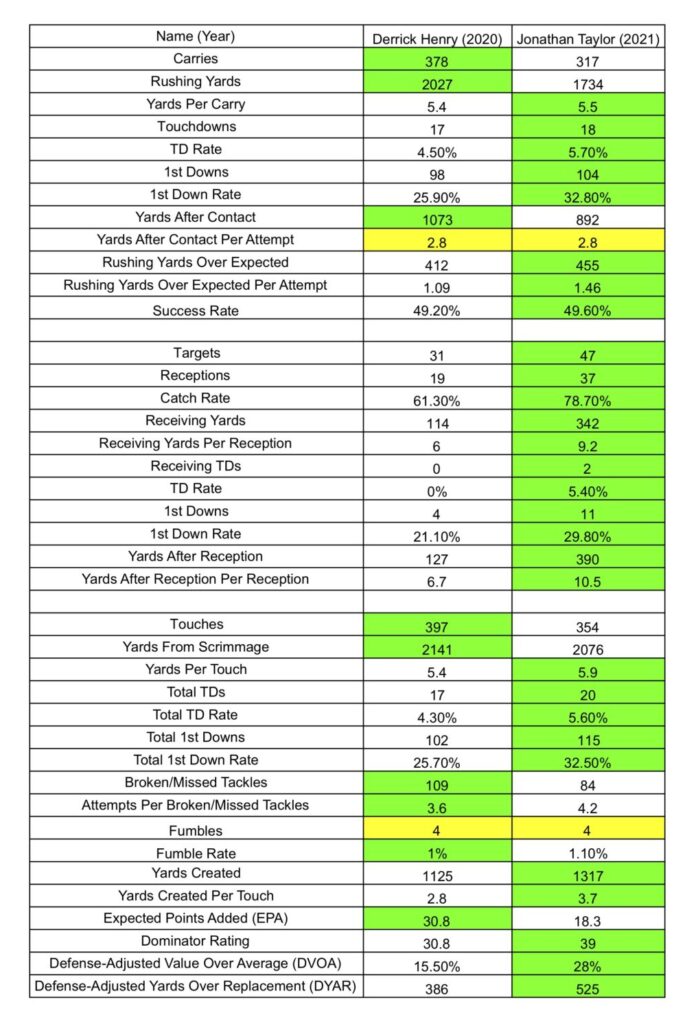 When it came to stats strictly on the ground, Henry put up a strong competition, beating Taylor in attempts, carries, & Yards after Contact & tied in Yards after Contact per attempt. However, Taylor has the edge in nearly all rate stats on the ground and 1st Downs, Rush TDs, rushing yards over expected (which factors creating yards despite or in addition offensive line blocking opening things up).

While Henry was able to keep pace and even beat Taylor in several of the ground stats, in the Receiving game, there is not nearly as much competition. Jonathan Taylor outright dominated Derrick Henry in every single notable receiving statistic. Whether volume-based or efficiency-based, it didn’t matter; Taylor was outright better in every stat by a wide margin. Combining Taylor’s league-best rushing abilities in 2021 with the top 10-15 among RBs receiving chops is a dangerous combo, showing strong versatility in how he can threaten a defense. Taylor may be a Colt, but he isn’t a one-trick pony.

In Scrimmage Total stats, Henry again makes a case as King in several stats. With more touches, total yards from scrimmage, & EPA, and the edge in Broken tackle total and rate & fumble rate, Henry has showcased his abilities very well.

In broken tackles, Henry really shines, which is reflected in both his strengths and mindset as a runner. Henry is constantly shedding tackles and loves nothing more than to run up the gut. The Titans’ run scheme loved to use him in interior rushes and outside zone plays, allowing him to build up speed and rely more on straight-line speed than quick cuts. He has the mindset to consistently churn out more yards and has been shown to refuse to go out of bounds and instead bulldoze players for more yards in bounds. While this is a great mentality to pick up additional yards and broken tackles, it runs the risk of shortening a player’s career due to injury in the long run.

However, JT still has the edge overall yet again. 1st Downs & scoring, he has an edge by a solid margin and yards per touch. Taylor separates himself here in the advanced statistics, winning 5 out of 6 of them. Despite the 54 fewer touches, Taylor created nearly 200 more yards than Henry and nearly a whole yard more per touch. Taylor also is relied upon more for his team’s total offense, as shown with a better dominator score. Football Outsiders even gave Taylor big edges in DVOA and DYAR, advances statistics that factor in opposing defenses’ strength, indicating that Taylor produced more than 2020’s Henry despite a more challenging schedule.

Looking at the entirety of their stat lines, it is hard to argue against Taylor’s claim to usurp the throne from Henry. Amongst all 39 stats, 2020 King Henry only beat 2021 Jonathan Taylor outright in 8 stat categories. Of those 8, six were based solely on sheer volume, most notably Henry having 71 more carries and 43 more touches in the year to boost some of his cumulative stats. However, despite the edge in usage, Henry did not beat Taylor in 11 other cumulative stats & lagged behind in nearly all efficiency-based stats. With so many stats working in favor of Taylor taking the crown, how could somebody try to justify Henry keeping the crown?

Before Derrick Henry truthers decide to rip apart this comparison and simply comment, “King Henry better,” allow me to address some of their concerns. Some concerns are genuine; others are made in bad faith.

A genuine concern would be the amount of in-the-box defenders each player faced. After all, traditionally, if an RB meets eight or more men in the box, it is tougher to run successfully. Jonathan Taylor faced eight men boxes just 27.13% of the time so far in 2021, but Henry faced them 27.14% of the time. Henry did have more 8+ men in the box at a slightly higher rate, but not enough to say he was facing them far more than Taylor. Both backs did have success in these situations, with Henry in 2020 leading the league in yards, yards per carry, & TDs in that regard. Taylor is the rare back whose stats actually improved per carry vs. 8+ men in the box. The tactic doesn’t seem to stop either back so far in their careers.

A pair of counterarguments is Taylor’s offensive line talent vs. the Titans and PFF Grades. The Colts have 2 Pro Bowlers on the OL in 2021 and a reputation as one of the best OLs in the NFL, earned rightfully with three strong years of play from 2018-2020. Heck, they have one of the best OL in the game in Quenton Nelson. You will notice I don’t like to use PFF grades, which are a subjective measure of people’s opinions of plays and not a purely objective statistic. If we used PFF grades, it would give a +5 grade edge to Derrick Henry… but it would also rank the Colts run blocking OL in 2021 (9th) as worse than the Titans’ run blocking in 2020 (5th). I have already gone at length about the flaws in the PFF grading system, and to accept them as objective statistics also accepts that Derrick Henry had better run blocking than Jonathan Taylor. Based on PFF, it seems the Colts OL rep is more to do with when the OL is healthy (it has not been in 2021) and when it pass blocks and run blocks effectively (it has only done one of those consistently & has still underwhelmed in that regard). Safe to say, both of these counterarguments shouldn’t be employed here.

Jonathan Taylor has wrested the crown away from King Henry, but like Game of Thrones, we all know that RB Kings typically have short reigns that don’t last many seasons. King Henry might have a chance to reclaim his crown in 2022, but the then 28-year-old RB’s team will be faced with a conundrum. Should Henry maintain his insane workload of 2020-2021, he will risk further injury that could shorten his career. Should he be put in more of a split backfield, he might not have the same opportunity to reclaim his throne and will need to return to his prior efficiency (he regressed in 2021 in that regard).

While Taylor is well-positioned to keep his crown for a few more years, Henry or not, he will still face challenges. The 22-year-old RB does have youth, stability, and several key starters on the OL (Nelson, Kelly, Smith), but many fellow young backs are hungry for the throne. Rookies Javante Williams, Najee Harris, & Elijah Mitchell are rising. Nick Chubb still remains, as do several other strong vets (some of which are starting to get more banged up/show their age more than others), as do fellow 2020 draft mates JK Dobbins, DeAndre Swift, Clyde Edwards Helaire, James Robinson, AJ Dillon. Anyone can emerge to take the crown in 2022, & it will be up to Taylor to prove that he can not only usurp the crown but hold on to it.