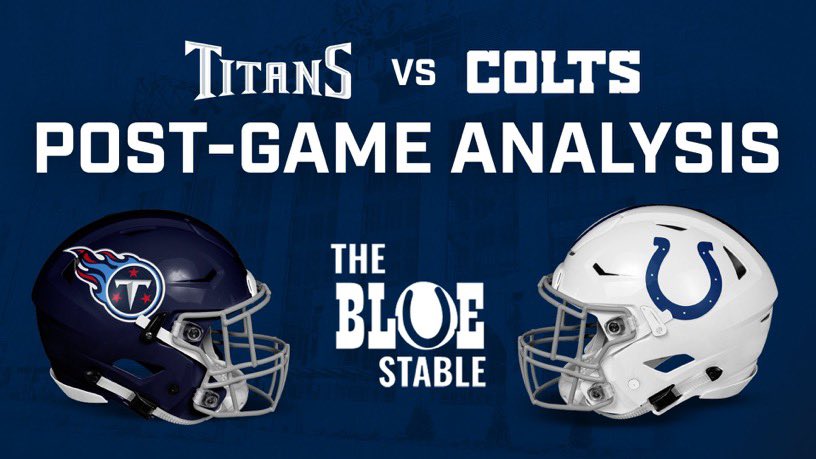 By Jack GuileyOctober 3, 2022No Comments

In a game that truly epitomized the Colts season to this point, the Titans capitalized on three Colts turnovers to stymie Indianapolis’ comeback effort for a final score of 24-17 Tennessee. Despite Indy out-gaining their opponent 365-243 yards-wise, the difference in this game came down to starting field position and converting on scoring opportunities. To be competitive going forward, the Colts will need to be more efficient offensively, especially in plus opponent territory. This team has shown the ability to play dominant football as we saw in the second half of today’s game. However, putting it all together is what will ultimately lead to numbers changing in the win column.

I was surprised when I felt optimistic following this game. Unlike the majority of Colts nation who seems ready to throw in the towel, I saw glimpses of what this team can do when it is firing on all cylinders in the second half. Young pass catchers continue to make an imprint on this passing game and will only continue to grow as the season goes on. The offensive line finally showed signs of viability in the pass game, and the defense was, dare I say, dominant in the second half. Matt Ryan showed what he can do when given a clean pocket, and it was genuinely impressive. This team is going to put together a complete performance soon, and when they do it will hopefully become a repeatable effort. There is still a lot of season left after all.

Yes there is a but to all of this, and it comes in the form of the coaching staff that has repeatedly failed to prepare their team for big games. The Colts have historically started seasons slow, and nothing has changed under the current regime. It is hard to constantly hear the same one line clichés from Frank Reich and expect change. The only thing consistent about the Colts’ plan of attack to start games this season has been to get punched in the mouth early and often.

Unlike the famous Mike Tyson quote, Frank Reich’s squad seems to have no plan when they get hit in round 1, and by the time they get back to counter punching in round 8, the opponent has already won on the scorecard. Simply put, this has to change or Frank Reich is gone. Jim Irsay’s patience is waning, and with each slow start the Colts endure, the hot seat sees more kindling added to the firepit.

Play of the Game:

Mo Alie-Cox had himself a career day, underscored by this 34 yard rumble:

It was great to see other pass catchers not named Michael Pittman carry the load today. If defenses continue to bracket Pittman, then guys like Alie-Cox, Jelani Woods, and Alec Pierce are going to have to continue to step up and win their one on one matchups.

A Big Day for Big Mo

As I discussed briefly above, Mo Alie-Cox was without a doubt the MVP for the Colts on Sunday. The former VCU basketball star racked up six receptions on six targets for 85 yards and two touchdowns. This is the second week in a row that a tight end has recorded two touchdown passes, signaling that Frank Reich is advertently taking advantage of the matchups of smaller defensive backs on the larger tight ends. Additionally, the early returns on the Alie-Cox contract extension this offseason seem to be paying dividends.

As a writer and a fan of the Colts, I pride myself on trying to be as objective as possible when it comes to giving my true analysis of the team. Dropping this game stings, and not just because of the loss, but also because of who it was against. However, distancing myself from the “homer” positionality that it is often easy to posses, I still believe in this team.

It’s simple to look at outlier events early in the season and make broad statements regarding a player or coach. For example, Matt Ryan’s fumbling issues have certainly cost the Colts points, and maybe even a game. Yet it is not reasonable to assume that these fumbling issues will continue at the same rate. Statistically, events such as these will return to the mean over the course of the 17 game season. This offense has seen individual parts improve, even if it has been minimal or still below expectations (offensive line). These observations lead me to believe that an uptick in offensive production is near, and it should start this week against Denver on Thursday night.

Anyone who has read my work since I’ve been with The Blue Stable knows that I’m not usually a glass half full fan when it comes to the Colts’ future prospects, (see here). This cautious optimism stems from the historical ferocity the Colts play with when backed into a corner. They typically strike when they’re least expected to; after they’ve been counted out and left for dead. Well here we are yet again. Your Indianapolis Colts have been abandoned by the media, the fans, and maybe even you. If you are almost to that point of waving the white flag, I’ll leave you with one more quote that carries on the unsolicited boxing theme of this post game article. It embodies the spirit of a Frank Reich one line cliché, yet still offers hope to those of us who remember the magical 2018 Colts team that started 1-5.