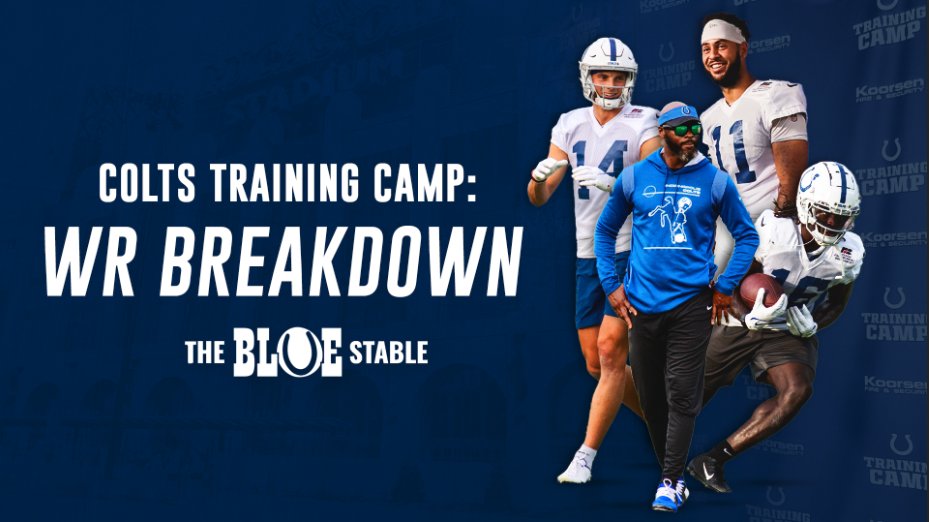 The Colts Training Camp is underway at Grand Park in Westfield, Indiana. With it beginning, Colts fans are finally getting their first, much anticipated looks at this year’s roster. One position in particular tends to catch fans’ eyes annually: Wide Receiver. This year is no exception.

The Unit is young and inexperienced, but dynamic and filled with potential. Not a single WR on the roster is over the age of 26. In lieu of adding an older veteran, the Colts instead got a future Hall of Famer as their WR coach. Legendary Colts route technician Reggie Wayne has been tasked to mentor this unproven cast of WRs.

The 3rd Year Wide Out from USC is coming off of a 1,000 yard season, and is still grinding to improve himself. MPJ has been “Mossing” defenders downfield regularly in Camp, even against Stephon Gilmore.

His contested catch skills, separation, and smoothness out of breaks have been hallmarks of his game. New QB Matt Ryan has certainly taken note of it, giving the former Trojan several 11vs11 targets. He is not afraid to trust MPJ to make the catch with several defenders in his vicinity, and Pittman has rewarded that trust with some spectacular grabs.

Parris Campbell has had an unfortunate beginning to his career, missing significant time each of his first 3 seasons.

Parris Campbell was held out Monday due to hamstring tightness. https://t.co/b7BVNOkTjg

If healthy, Parris can be an exciting weapon for this Offense. A zone-busting speedster who can acquire YAC in bunches, Campbell may fully unleash his skills downfield this year.

Parris’ speed and agility are insane even by NFL standards, and if he stays healthy and continues to show his deep speed, ability to adjust to throws, and hands, he could finally put the rest of the NFL on notice. Watch out for this Buckeye, because if you blink you might miss him.

Colts rookie WR Alec Pierce has the potential to be a true menace to NFL defenses. The University of Cincinnati product is like a hybrid of Pittman Jr. and Parris. His initial speed and acceleration are similar to Parris, ranking in the 99th percentile of all WRs. His size, length, strength, are reminiscent of Pittman Jr. In camp, the former Bearcat has shown these physical gifts in abundance.

Pierce in that clip above just stacked Isaiah Rodgers vertically, a Corner with 4.2 speed and 36” arms. Beating Rodgers deep is no easy feat. Combine that with strides he is making in beating press thanks to Reggie Wayne, and further filling out his route tree…

Alec Pierce has been listed as a starting WR on the Colts first unofficial depth chart. pic.twitter.com/gqud6hpLhX

The sky’s the limit for Alec Pierce. As a rookie expect him to be the WR2/3 and be used a lot outside. Expect plenty of downfield routes to help open up things for the shorter and intermediate routes. But if a corner/safety isn’t able to keep up, watch out for Ryan to take a shot downfield to Pierce

Nyheim Hines is considered by some to be a receiving Running Back. Personally, I see that as a glaring oversimplification and oversight on him. The speedster has been used in the backfield plenty of times in his career, either as an improving runner or a safety valve out of it in the pass game. But in camp, we have seen Hines used more and more frequently out in the slot.

Expect Hines to get more and more looks lining up as a WR. He will share the backfield with Taylor as the 2 lead backs, but will also share the field with him on plenty of drives. This strategy can be used to great effect. Frank Reich particularly was fond of this in the Redzone, on Short yardage Situations, and on 3rd downs. Whether it is to create misdirection in motion sweeps, a matchup nightmare, or to add speed to the slot, Hines will have a significant role to play in the WR corps.

Talking with people in #Colts HQ, hope is their pass offense looks more like 2020 with Philip Rivers than 2021 with Carson Wentz.

They expect Matt Ryan‘s timing to be a smoother fit with Frank Reich/Marcus Brady offense. Also expect more play action, use of Nyheim Hines as WR.

If there is a Wide Receiver on the 2nd team receiving the most praise, it’s clearly Ashton Dulin. The former Malone Pioneer WR has cut his teeth on Special Teams in his first few years on the Colts, but it sounds like he will have a bigger role on the offense as well this year.

.@Colts HC Frank Reich: “I cannot emphasize how strongly we feel about Ashton Dulin.” Says he envisions the WR making an impact on offense & special teams.

With Frank Reich singing his praises, it appears that Dulin will round out the quartet of purely WRs who will be guaranteed make the roster. He has rotated on 1st team as well at times, showing the Colts are confident in him playing there. Should an injury ahead of him occur, Dulin entering the top 3 on the depth chart would be the highest he has ever been on the pecking order.

Ashton Dulin with a big catch against Dallis Flowers #ForTheShoe

Don’t sleep on Dulin, he’s had an incredible camp 📈 pic.twitter.com/sHHPDPD0Tr

Ford in the Driver’s Seat

Isaiah Ford might be one of the Colts most recent additions in Free Agency, but just days after being signed by the Colts, he could be carving out a roster spot for himself. The former Dolphin is the oldest WR on the team at age 26, and he did have some modest production previously as a depth player.

1. Fans came in bunches and were treated to some damn nice plays. Isaiah Ford and Ashton Dulin had some outstanding 1-on-1 grabs on the sideline. Ford might have been the most impressive receiver, and he has some experience.

The Virginia Tech product has flashed some strong route running and smooth hands consistently on the 2nd team. So far in camp he has separated himself not just from defenders, but from fellow veterans John Hurst and Keke Coutee for a shot at the WR5 spot on the depth chart.

“Wait, didn’t we already talk about Alec Pierce?” Fear not my reader, you are not suffering from Deja-vu. For you see, Pierce isn’t the only 2022 rookie WR from UC on the Colts…

Michael Young Jr, the Undrafted Free Agent Bearcat, is trying to earn a spot on the Colts. Unlike his collegiate teammate Alec Pierce, he flew under the radar heading into camp. However, he has already made a play that is capturing some attention.

While one play doesn’t solidify a player’s standing with a team, the young wideout should be noted as one with a chance to sneak in on the back of a roster or be a practice squad stash. If he continues to make splash plays, it will be harder to ignore him around the NFL as teams decide who they should put on their teams.

Beyond those 6 aforementioned Wide Receivers and Hines, there are 7 other WRs trying to earn spots. While none have created major splash plays in camp thus far, there is still plenty of time to do so and get on the Colts come the regular season.