By Austin IsaacJuly 29, 2021No Comments
Embed from Getty Images

Earlier this week, Dolphins’ star corner, Xavien Howard made public that he has officially requested a trade out of Miami. Now it was something we all speculated to begin with, but for him to go public with it must mean he is very unhappy with his current situation. The good news for Colts fans? It just so happens that cornerback is one of the top needs of this team. The bad news? A trade for a high-level cornerback is highly unlikely. But that doesn’t mean we still can’t have fun with it.

The issue with this trade is that should the 2020 interception leader be traded, he will likely be looking for a new contract from his next team. One of the reasons for requesting a trade was him admitting he “did not fully understand or was even comfortable with the contract” that was given to him back in 2019. And now that he feels he has outperformed his contract (which he very well may have, but that is subjective), he wants more money that better suits his level of play that he brings to the table.

Now according to overthecap.com, the Colts currently have $14.2M in cap space before Braden Smith’s contract extension has hit the books. Granted, that contract won’t exactly come into effect until 2022 (same with the impending Darius Leonard and Quenton Nelson contract extensions), that’s still not a ton to work with given Howard’s current contract puts him at a $13.5M cap hit. Meaning essentially (while cap space doesn’t even *really* exist) the Colts would need to trade a player along with whatever else they are sending to Miami for the superstar cornerback.

So today following my two previous articles looking at trade packages for both Julio Jones, as well as Zach Ertz (neither of which panned out), we take a look at a few different scenarios that could result in the unlikely event that the Indianapolis Colts trade for a top-tier CB1.

One of the few holes on this Miami Dolphins roster is running back. Don’t get me wrong, Myles Gaskin is a solid running back, but he is in no way a RB1. Hines is ready to take on that bulk carry role that he wouldn’t be able to get in a running back room as loaded as the Colts’. He is an instant plug-and-play starter for the Dolphins and gives Tua an elite weapon as a receiving threat too. Throw in a couple of picks, and that might be enough.

Similar situation to the first trade scenario. If the Dolphins want to go to a more running back-by-committee approach, Jordan Wilkins is a solid trade piece as well. With Jonathan Taylor coming off of a monster rookie season and former RB1 Marlon Mack making his return, Wilkins’s skills will not be as necessary here in Indy. Rock-Ya Sin is a former high-second-round pick that is still working on a few things. But if we’re getting Xavien Howard in return, it’s only right that we give them a developing corner to pair with Byron Jones and Noah Igbinoghene. Throw in Ben Banogu, who seems to be in the same situation as Ya-Sin, as well as a late-round pick, and that could get the job done.

Now hold on. Please don’t yell at me yet. I know what you’re thinking, and honestly, I’m thinking the same thing. Leonard is the heart and soul of this defense, and him being traded would be like Peyton Manning being traded…wait a second. Try to look at it from a front-office standpoint. He’s due to a massive extension (Likely higher than Fred Warner’s $95M contract) and will probably end up the highest paid linebacker in the league. But the thing is, linebacker isn’t as important of a position as cornerback is, and the Colts have some pretty solid linebackers as it is. And would you rather have a young, ball-hawking true CB1 or a young, do-it-all linebacker? Because honestly, you can only have one with the contract extensions that will ensue within the following year. Still not buying it? Okay, you can yell at me now.

Embed from Getty Images    Last month, we took a look at a few different…
Austin Isaac 0

Cornerstone Cornerback? The case for Howard or Gilmore 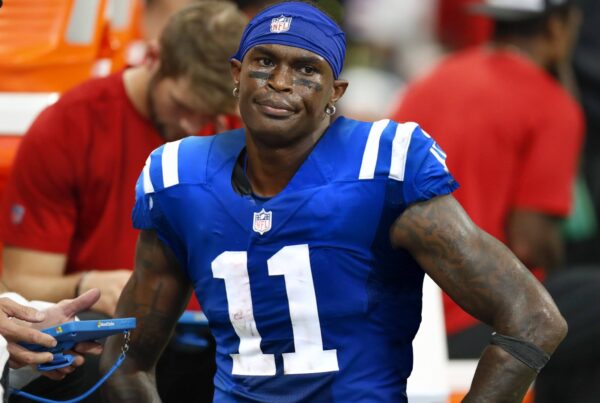 It’s no secret at this point that Julio Jones wants out of Atlanta. As of now, it…
Austin Isaac 1