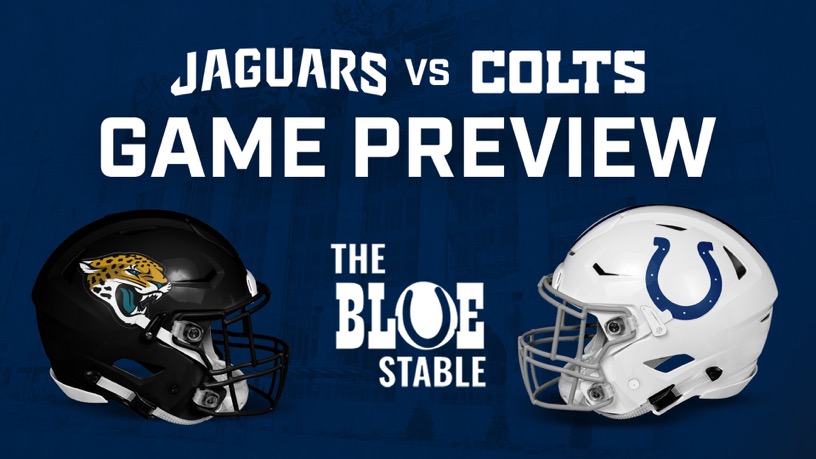 Indianapolis went into this season knowing a strong start would give them the chance to put themselves in the driving seat in the race to win the AFC South given the density of divisional matchups in the first few weeks. They also had a score to settle with Jacksonville after the humiliating end to their 2021 season.

Of course, this being the Colts, nothing is that simple. Indianapolis have failed to win any of their three divisional matchups so far and suffered an even more humiliating loss to the Jaguars in Jacksonville this year. However, the Colts are 2-2-1 and are firmly in the mix to win the AFC South.

They’ll have to start beating their divisional rivals if they want to make the postseason, and the chance to get a measure of revenge on Jacksonville should be too good to pass up. Given the Colts only appear to be cursed against the Jaguars when playing in Jacksonville, they will actually have a chance to win this week. But what will they have to do to secure the victory?

Can The Defensive Dominance Continue?

The best part of the Colts season so far is undoubtedly the strong performance of their defense, especially in the second half of games. They haven’t conceded a touchdown for six quarters (plus overtime against Denver) and have conceded 20,24,20,24, and 9 points respectively this season.

Although not entirely consistent, the pass rush has significantly improved this season. The team has secured 11 sacks so far, with Buckner, Ngakoue and Paye all having some strong performances. Paye’s injury is concerning, but he could still be good to go on Sunday.

Ashton Dulin is expected back this year, Reich says. Went on IR yesterday.

At Linebacker, Franklin has done well to step up in Leonard’s absence. The outlook for this defense is even better once Leonard is fully fit, we all know what a brilliant playmaker he can be. In the secondary, Moore has justifiably garnered criticism for not performing to his potential in several games so far, although he was much better against Denver. That being said, Stephon Gilmore has been excellent, Rodney Thomas has been a revelation and Rodney McLeod has slotted into the team impressively smoothly. There is certainly room for optimism for the unit for years to come with Blackmon, Cross, Thomas and Rodgers all showing real potential early in their careers. Although there are questions as to if/when Rodgers will be given the starting CB nod over Brandon Facyson.

Their performance against Jacksonville was undoubtedly their worst of the season so far, but there are good reasons to believe Indianapolis’ defense can put on another strong showing on Sunday. Trevor Lawrence and the Jaguars offense has shown signs of significant improvement this season, but they played poorly against their own bogey team of the Texans last Sunday. This should be a Colts defense that can get and keep the upper hand over the Jacksonville offense.

Should we Expect the Offensive line to Improve?

This is one aspect of the Colts I don’t mind admitting has puzzled me this season. Indianapolis have one of the most expensive offensive lines in the league and on paper it should be one of the best. Its performance has been far, far below that level so far this year. It’s no surprise you cited improved offensive line performance as the key to a Colts victory.

The #Colts currently sit 2nd in the AFC South with two massive divisional games coming up. What do you think with be the number 1 🔑 for the Colts to regain control of the division? #ForTheShoe

Quenton Nelson has been in my opinion the best offensive lineman in the league for most of his still fairly young career (although Trent Williams was clearly the best last season), Ryan Kelly is a multiple-time Pro Bowler and Braden Smith looked like one of the best Right Tackles in the league two years ago. None have played to their potential this season, with Kelly and Smith being particularly disappointing.

Had those three played at or close to their potential, the unit could have handled growing pains from Pinter/Fries and Pryor/ Raimann. Given the three veterans have underperformed and the newer players haven’t hit the ground running as effectively as the coaches would have hoped, the unit’s performance has been terrible. Matt Ryan has been repeatedly sacked and under significant pressure when he isn’t sacked.

This Colts offense was sold as one with a solid Quarterback and good enough weapons at the skill positions that would be successful because of its elite Offensive Line. That certainly hasn’t been the case in reality. With the O-Line frequently functioning as a turnstile or a welcoming committee for opposition pass rushers. It’s not an exaggeration to suggest Offensive Line Coach Chris Strausser’s position may be in jeopardy if the situation doesn’t rapidly and significantly improve.

How can Indianapolis improve the performance of their O-Line? Part of the solution has to be the coaches somehow getting Nelson, Smith and Kelly to play closer to the level we know they can play at. Nelson’s performance is particularly puzzling given his impressive consistency throughout his career so far. Whether it’s technical coaching, motivation, identifying traits on film or just saying the right words, Colts coaches have to get Nelson, Smith and Kelly to play better.

Aside from that, Indianapolis are likely to continue to shuffle their Offensive Line around in the hope of finding improvement. Despite his rocky starting debut against Denver, Bernhard Raimann should and likely will start against Jacksonville. Raimann has potential and ultimately only game time against real opponents in meaningful games will allow him to achieve that potential.

The plan for Bernhard Raimann is for him to continue as the @Colts starting left tackle, Frank Reich says.

“He has the makeup, he had the physical talent. We like what we’ve seen so far.”

Elsewhere on the line, I expect Braden Smith to return to his usual Right Tackle spot. Will Fries could well be worth a starting shot at Right Guard, which I’ve seen a number of Colts podcasters calling for. Matt Pryor would be another option at RG and would likely perform better than he has at LT or RT. These possibilities would leave Pinter free as an option at his natural Centre position and it could be worth Indianapolis giving him the starting spot at C over Kelly against Jacksonville. Whichever combination they ultimately opt for, the Colts (and fans) must be wishing they’d signed Charles Leno over Fisher last offseason and retained either Glowinski or Reed this summer.

How good will Jacksonville be?

That’s an excellent question, the short answer is we don’t know. I think we’ve all learnt not to read too much into Jackonville’s performances against Indianapolis in Jacksonville. After all, there have been a lot of convincing Jaguars victories in seasons that ended with Jacksonville possessing a top five draft pick. This year, the Jaguars backed up their convincing win against the Colts with an impressive win over the Chargers. That win raised expectations for Jacksonville across the league, expectations that haven’t necessarily been met since. The Jaguars lost to the impressive Eagles and the less successful Texans to move to 2-3 for the season.

Doug Pederson has clearly got his team playing far better than last year and Trevor Lawrence has significantly developed since his debut season. However, the Jaguars have had a lot of years where they thought they were going to get a lot better after drafting some top prospects, only to find themselves back in the same old rut. The entire league will need to see more consistency from Jacksonville before we can be convinced they’re no longer the team they’ve been for much of the past decade.

Jacksonville have talent on their defensive line with Travon Walker and Josh Allen, which should concern a team like Indianapolis whose Offensive Line has resembled Swiss cheese this season. On offense, Christian Kirk has made a solid start to justifying his $18m a year contract. Whilst they have one of the better running back pairings in the league in James Robinson and Travis Etienne.

The Jaguars look like a pretty good team, but Indianapolis should be too good for them. As I’ve already discussed, whether that actually happens will largely rest on the performance of the Colts’ offensive line. But if they do end up losing to Jacksonville, they shouldn’t pretend the Jags are suddenly one of the best teams in the league. They aren’t.

I don’t expect Indianapolis to secure the kind of comprehensive win the Jaguars subjected them to in Jacksonville, but I do think the Colts will finally win a divisional game this season and get a measure of revenge. I think the game will be close but I’m backing the Colts offense to improve a little and their defense to be the decisive factor. I’ll go with 23-17 for the final score.