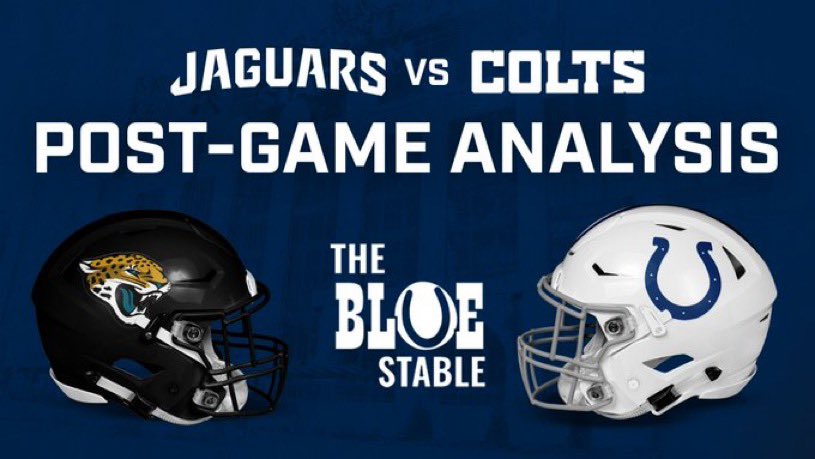 Colts vs Jags: A Measure of Revenge

Home » Colts vs Jags: A Measure of Revenge

It was far from a perfect performance, but the Colts can take a lot of positives from their rematch with Jacksonville. For a start, the 34-27 win leaves the team 3-2-1 and in a strong position to mount a major challenge to win the AFC South and make the playoffs. It was a far more impressive and satisfying win than their ugly victory over Denver the week before on Thursday Night Football. A victory that gives fans cause for cautious optimism for the team’s prospects for the rest of the season. But what went right?

The #Colts complete the comeback and move to 3-2-1 on the season!

Here are your top performers! Who was the MVP of the game today for you?#ForTheShoe pic.twitter.com/2QTOa8AADU

In my game preview I identified the performance of the Indianapolis offensive line as one of the key’s to victory. Whilst I wouldn’t go as far as saying the O-line was the team’s best performing unit, it was far more effective than it has been so far this season.

Colts writers and pundits have rightly focused on how what should be one of the best offensive lines in the league has been one of the very worst. This performance was a big step in the right direction for the unit. Matt Ryan wasn’t sacked at all, didn’t fumble and had sufficient time to throw. Anyone who has watched Indianapolis for any meaningful length of time this season will appreciate how much of an improvement he made compared to the Denver game. The improved play by the offensive line supported a much better offensive game overall for the Colts, including some quality play from individual players.

Matt Pryor looks to have found his best position at RG and may have solved the team’s issues at that particular spot, whilst Braden Smith looked much better back at his usual RT spot. The Colts have made clear they see Raimann as their long-term LT and there are good reasons for this. But after Dennis Kelly made his first appearance of the season against Jacksonville, both could be used for significant snaps in the short and medium term. It certainly looks like Indianapolis have found a much better starting O-Line than we had previously seen this year.

There was rightly significant discussion throughout the offseason over Chris Ballard’s refusal to sign a big name free agent wide receiver and instead insist he liked the young group he had at his disposal. The jury will remain out on that decision for some time, but there were some really positive signs against Jacksonville.

After a shaky offseason, Jelani Woods has looked clutch so far in his rookie season. He may not get a lot of receptions in a game, but the ones he gets are big plays that win games. Woods caught his third touchdown of the season to put them in a strong position to get the win. He already looks like a deadly redzone threat and it’s exciting to think what the third-round rookie can do with more time in the NFL.

Second-round pick Alec Pierce already deserves a lot of plaudits. He made some impressive and vital catches against Denver and made another challenging one to secure the game-winning touchdown this week.

Encouraging performances from rookie pass catchers doesn’t necessarily vindicate Ballard’s approach, nor does it meant the team wouldn’t have been better with another established receiving threat. But it does mean the long-term prospects for the Colts’ offensive skill players are bright if the likes of Pierce and Woods can continue to develop to join the likes of Taylor and Pittman as great playmakers.

Deon Jackson isn’t a rookie as this is his second year with the team. But it is his first year and first few games getting serious opportunities as a running back. Jackson had some encouraging moments against Denver and backed it up with a big game against Jacksonville. Jackson rushed for 42 yards and a touchdown alongside 79 receiving yards. The Colts asked a lot out of Jackson in the absence of both Jonathon Taylor and Nyheim Hines, and he more than stepped up to the challenge. The improved run blocking from the o-line helped better the matter too.

Whilst the young offensive players deserve plenty of plaudits, the veterans deserve some too. Michael Pittman is still a young player at 25, but he is the best and most important member of the Colts receiving corps. Pittman may not have had a touchdown this week, but he did snag 13 receptions for 134 yards. Some of those receptions were difficult catches at crucial points of the game. Pittman’s performance is another reason to believe he can be a true WR1. It also bodes well for Alec Pierce’s career to see a fellow 2nd round Colts pick with many similar skills thrive in the NFL.

Matt Ryan is a true veteran, as he not passed Brett Favre to move to 7th place in the all-time passing yards standings, but also orchestrated yet another game-winning fourth quarter drive. It wasn’t a perfect performance from Ryan, but it was what we expected from him when Indianapolis traded for him and illustrated what he can do when he has solid protection from his offensive line. It’s hard to overestimate the value of Ryan’s ability to lead game-winning drives given how frequently Indianapolis fell short late in games last season.

I also liked the Colts’ boldness in going for the game-winning touchdown rather than settling for trying the field goal. Too often I see teams settling for game-winning or game-tying field goals instead of trying to win the game with a touchdown, only for a kicker to miss the kick anyway. I like the aggressiveness in going for the touchdown and was delighted the risk came off.

Matt Ryan on the game-winning touchdown: “You can’t play scared.”

Indianapolis didn’t quite have the shutdown defense against Jacksonville they enjoyed against the likes of Denver. But then again, they’ve carried the Colts offense to plenty of wins already this season and were much better than in the first game against the Jags this season.

The bright spot of the Colts defense was once again the pass rush, which sacked Trevor Lawrence four times. That is much better than in their first meeting this season and continues the trend of the Indianapolis pass rush being much more effective than it was last season. That is encouraging for the Colts’ success moving forward.

DeForest Buckner, Grover Stewart, Tyquan Lewis and Ifeadi Odenigbo all got one sack, one QB hit and one TFL each. With Buckner’s sack forcing a particularly large loss of yards for the Jaguars. This is a unit that should get even better when Kwity Paye returns from injury.

The defense as a whole should get much better once Shaquille Leonard is able to be healthy for a stretch of games. However, Zaire Franklin has continued to fill in admirably in Leonard’s absence, and Bobby Okereke notched another good game as well.

What Needs to Improve

This is mercifully a much shorter list than my postgame article after the first Jacksonville game, where my list included everything. Plenty of the areas I found encouraging for the Colts this week like their offensive line and offensive skill players need to continue to improve, but they both took a major step in the right direction.

There are some more glaring areas that will need to be much better for Indianapolis if they are to continue to get the results they want. The most obvious of these is their rush defense. The rush defense has actually been the Colts strongest area in the first few weeks of the season, as Grover Stewart has played brilliantly when so many of his teammates faltered. However, they weren’t good enough against Jacksonville.

The Jags’ running back trio of Travis Etienne, JaMycal Hasty and James Robinson, rushed for a combined 197 yards and 1 touchdown between them, with Trevor Lawrence rushing for two short touchdowns of his own. Some of these Jaguars runs were far too long and far too easy. The Colts will have to defend the run far better against Tennessee and Derrick Henry next week if they want to secure another division win and avoid another sweep at the hands of their rival.

One other hole in Indianapolis’ defense is the poor play of cornerback Brandon Facyson, who had another tough game in key situations that benefitted Jacksonville. Much of Colts Twitter was left unimpressed by Facyson’s performance and keep wondering why he continues to get snaps ahead of Isaiah Rodgers.

Given Rodgers’ strong determination when given opportunities, I would like to see him be given the starting CB birth alongside Gilmore and Moore. We all know about Rodgers’ elite speed and athleticism, but he has also shown a capacity to learn quickly in his still relatively young career. I believe Rodgers can do great things in this Colts secondary as a starter.

RT if you agree that this guy should be a starter going forward. @rodgers_isaiah | #ForTheShoe pic.twitter.com/ymj9RzLXQE

Next week the Colts face a crucial divisional matchup against the Tennessee Titans who are coming off a bye week. The winner will be in the driving seat in the race to win the AFC South. The Colts will be happy to go into the game with momentum after their best offensive performance of the season.

So many of the Colts issues last season came from digging themselves an early hole they just couldn’t get themselves out of. Despite several disappointing games this year, a win would put the Colts in a strong position with some very winnable games ahead in the second half of the regular season.