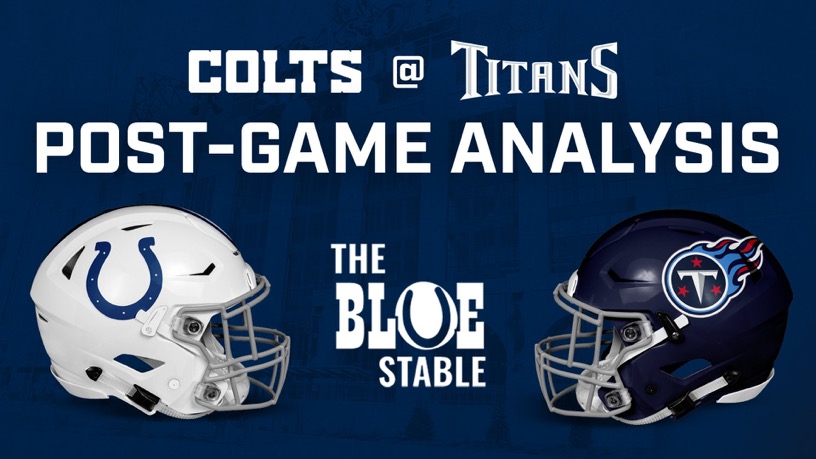 After the Colts Offensive Line had a remarkable bounce back game versus the Jaguars last week, hope was renewed for the Colts season to begin to turn around.

This week we got a quick answer to both questions: No.

The Colts offensive line didn’t live up to its pay scale today, nor did it live up to its renewed hype. Instead, its performance lived up to its name: it was offensive to watch. Matt Ryan was under duress constantly. This started early, allowing 7 hurries and 5 knockdowns in 23 1st half dropbacks. Matt Ryan was able to get the ball out quickly only getting sacked 1 time during that stretch. Unfortunately, turnovers reared their ugly head again, with a pair of picks costing the Colts dearly, giving the Titans 10 points off of turnovers (including a pick 6) to take a 13-0 lead in the 1st.

Ryan was asked to take bigger shots later in the game as the Colts were attempting yet another comeback. He was sacked an additional 2 times in his 22 drop backs in the 2nd. Matt Ryan was far from perfect in this game but this offensive line getting him constantly harassed has been a blatant problem. It has certainly made the margin of error for him narrow drastically.

If asked before the game who the Colts top targeted receiver would be, the answer would have likely been Michael Pittman Jr. Pittman did have a solid game in Tennessee, including several clutch 1st down conversions to continue drives. But it was Parris Campbell who was the top man today.

After a long drive down the field, the @Colts strike back!

After starting the season with 15 targets in the first 5 games, Campbell received 12 targets today, catching 10 of them and gaining 70 yards and 1 TD. After an 11-target game the prior week, it is clear that he has earned a bigger role in this Colts Offense.

The Colts Defense had yet another strong performance.  Gus Bradley’s unit allowed only 270 yards of offense and 0 TDs for the Titans. Tannehill was consistently under pressure, getting sacked 2 times as well. They held Derrick Henry to just 4.26 yards per carry. They consistently stopped the Titans offense when they needed to the most, forcing them to kick 4 Field Goals.

The Titans are going to win this game without an Offensive TD on the day.

Yet another game an incredible performance by the #Colts defense is wasted by this Offense.

The Colts have to feel very encouraged by the defensive performance so far this season. Yannick Ngakoue and Stephon Gilmore have made noticeable big boosts to the pass defense. The Rodney Duo at Safety (McLeod and Thomas II) have been a pleasant surprise. Grover Stewart has taken a big step, as he racked up 12 tackles on the day. Doing all of this without pass rusher Kwity Paye or annual All-Pro LB Darius Leonard is highly commendable.

When a game consists of 2 offenses unable to consistently move the ball, the starting field position battle becomes critically important. The less an Offense has to move to get into scoring range, the better. Versus the Titans, the Colts had a clear disadvantage due to 2 factors:

The Colts suffered 3 turnovers: the aforementioned Matt Ryan INTs, as well as a Michael Pittman Jr. fumble. While the defense was able to get stops, they were unable to force any takeaways of their own. The only one they received was due to a Malik Willis fumbled sweep that the Colts fortunately recovered. Had the Colts been able to stop the Titans quicker on drives to keep them out of kicking range or caused some more turnovers, they might have pulled this game out. However, this is a relatively nitpicky complaint considering the Defenses effectiveness in stopping the Titans Offenses drives at some point. But some fumbles punched out by a certain Maniac could have really come in handy today.

The most glaring Special teams mismatch was in the Punters. Colt Punter Matt Haack had 5 punts for 176 yards, with a brutal average of just 35.2 yards. He entered the game with the 31st-ranked punting average and 27th in net. He continued to put the Colts Defense in tight spots, but they held up well in spite of that. Titans Punter Ryan Stonehouse had 3 punts for 164 yards, averaging 54.6 yards. He entered the game 1st in average kicking yards and 2nd in net. In a defense-dominated game, that difference in the field position battle played a bigger role than anyone would have wanted for the Colts.

The major stretch of the Colts’ Divisional schedule is over, and the results haven’t been pretty.

With only a rematch against the Texans in the season finale remaining on the schedule, the rest of the Colts season will be outside of the AFC South. The Colts are 1.5 games away from the AFC South lead, as well as 0.5 games behind the Bengals for the 7 seed in the playoff race. They are far from being considered contenders, however, they are not favorites for a top QB in the draft. In the proverbial no man’s land, the Colts will need a dramatic change positively or negatively to swing the season in either direction.

The next opponent: The Washington  Commanders.