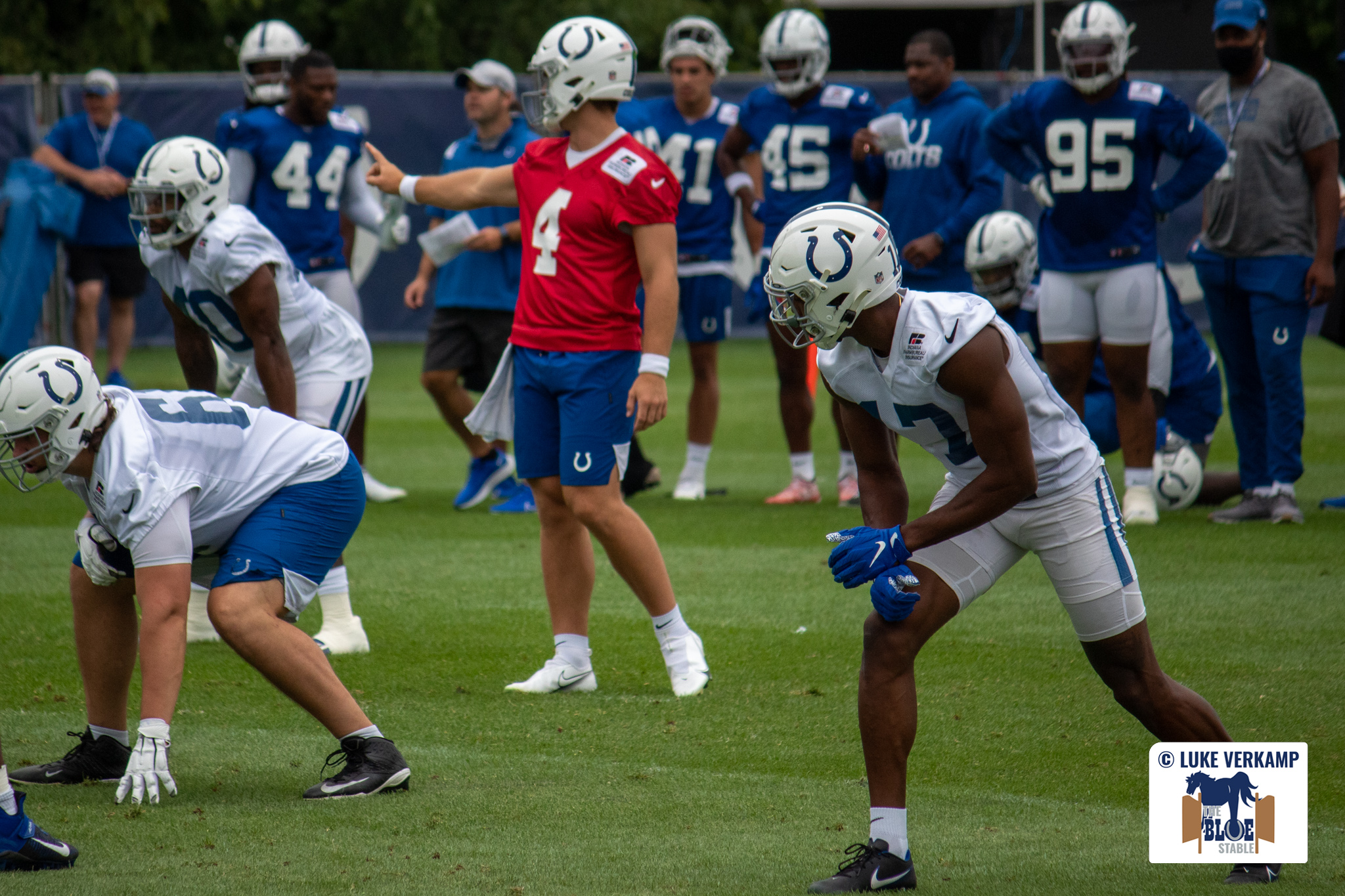 The Search for the Franchise Savior and his Garrison of Guards

By Jack GuileyOctober 26, 2022No Comments

*Note: this article was written before Sam Ehlinger was announced as the starting quarterback for the remainder of the 2022 season.

As the initial emotions of yet another Colts’ loss to the Titans began to wane Sunday afternoon, a very important and seemingly repetitive fact stuck out above all the noise.

The Indianapolis Colts lost a divisional game in which their defense did not concede a touchdown.

After yet another disgusting offensive performance in Nashville, Tennessee this Sunday, it is only fair to begin to turn one eye towards the future of how this organization and its (new?) leadership will solve the recent offensive line struggles, and the ever present dilemma of finding a long term franchise quarterback.

Whomever takes the helm of this Indianapolis Colts franchise after Matt Ryan will be in a position to succeed early with a young group of playmakers. Michael Pittman Jr. is a budding star whose big frame can be a quarterback’s best friend, while Alec Pierce has proven to be a reliable downfield threat whose dynamic, big play ability has already helped seal a Colts’ victory once in his young career. Additionally, Paris Campbell has begun to prove he can be trusted as the Colts third receiver and win consistently underneath zone coverages. The tight end group has a variety of skill sets that provide YAC opportunities and mismatches in the red zone when called upon. Capping off the skill groups is the 2021 rushing champion Jonathan Taylor and sparkplug Nyheim Hines.

Putting adjectives in front of receiving threats and running backs seems indiscriminate when their true potential is quite possibly locked away due to deficiencies at the rest of the offensive position groups. It was clear on Sunday that Matt Ryan didn’t have the confidence or time to step in to the throws that would allow for the big play potential I discussed above. The offensive line struggles compounded upon the immobility of Matt Ryan make for as Jaguars defensive lineman Travon Walker put it, “a sitting duck”.

Well the duck briefly found its wings last week, but seven days later a shotgun slug shot from Mike Vrabel’s 12 gauge sent it plummeting back to Earth. Has Matt Ryan shown us he can make plays from a clean pocket? Yes, but the Colts are simply not capable of consistently providing him adequate protection and opposing defensive coordinators know it. On Sunday Ryan looked like Ben Roethlisberger in 2021 when he didn’t trust his arm, his legs, or offensive line. The interior of the pocket collapsed quickly which left Ryan little opportunity to step into his throws. Consequently the velocity on those throws took a nosedive much like my proverbial dead duck.

No matter how the season ends, the recipe for sustained success does not currently exist in Indianapolis. Whether coaching or front office changes are impending, I strongly believe an offensive line retooling is in place this offseason. Alongside an overhaul on the offensive line, whomever the GM is (personally I believe it will be Ballard), needs to take a swing on a young quarterback. To keep his job Chris Ballard is going to have to prove he is willing to deviate from the route he has taken the Colts so far. If Ballard promises Irsay he will be aggressive in the quarterback market then he may keep his job and be given the chance to do what he does best, evaluate talent.

If the Colts continue down the path of mediocrity and finish this season around .500, then a draft pick in the teens will be in order. A trade up into the top seven, or even five would then need to take place for Indianapolis to have a chance at one of the top three signal callers. Looking back at the trade that brought Josh Allen to the Bills, Buffalo exchanged picks with Tampa to go from twelve to seven and added two second round picks. Depending on the results of the Carson Wentz trade, the Colts could do something similar with their second round pick plus the potential second from the Commanders. With the margin of error of thoughtful speculation given, halfway through the college football season Will Levis of Kentucky looks to be the “consensus” QB3 amongst evaluators.

Levis runs a pro style offense at Kentucky where he has displayed incredible arm talent along with the mobility that Colts fans are yearning for. There are still games to be played, combines to be had, and pro days to be attended, but one thing is for certain; Will Levis has the tools to be an above average quarterback in the NFL. If Chris Ballard were to take a shot on the Kentucky star, he would probably sit behind a veteran for most of 2023, as he adjusts to the NFL game. I will eventually put out a substantially more detailed breakdown of Levis as well as some of the other top QB prospects as we get closer to draft season. For now however, we only have a hypothetical.

Another equally intriguing option would be to send a day two pick to the Bears for Justin Fields. Fields has seen his growth stunted by an atrocious Chicago offense that lacks an offensive line and any semblance of a playmaker outside of Darnell Mooney. Chicago’s new regime who has no investment in Fields may decide to move on from him at the end of this year and restart their rebuild timer behind a rookie.

This move would be unpopular among some in the fanbase who’d view this is a lateral move similar to those Ballard has made in the past with Phillip Rivers, Carson Wentz, and now Matt Ryan. However, Justin Fields would still be on his rookie contract and only in his third year in the league. If Jim Irsay were to approve this move and give the Reich/Ballard train one more run, this would be sensible. Reich’s history of improving quarterback play could help break Fields of bad habits he’s learned in Chicago and allow him to find the confidence he currently lacks alongside a young receiving core. Fields has always had supreme talent, and comes without the injury history Carson Wentz had. Taking a chance on the former Buckeye would only make sense however if the five men in front of him can protect competently.

Colts fans will not have to watch in abject horror every time a quarterback drops back in 2023 knowing that Matt Pryor will not be on the roster. Pryor has thoroughly disappointed this season, in what can be considered one of Chris Ballard’s biggest whiffs of the offseason. To address the left tackle spot next year, it is important to keep in mind that the Colts will likely not pick again until the third round if they trade up for a quarterback. This means that a top offensive tackle prospect is out of play, and Indianapolis would have to look in free agency for the franchise’s next blind side protector.

One possible solution is current Eagles’ OT Andre Dillard. Dillard is a former first round pick out of Washington State who struggled with inconsistency and injuries early in his young career. Now he is slotted behind one of the best left tackles in the league in Jordan Mailata. Dillard, who’s been solid when he’s seen the field, would compete with Bernhard Raimann for the starting left tackle job. Going into training camp next year the coaching staff should emphasize that every spot on the offensive line is up for grabs, with this left tackle battle being one of the most competitive. While I wouldn’t expect Dillard to be a world beater, he could provide the average tackle play the Colts desperately need.

Continuing with the theme of competition, the center position should not be automatically given to Ryan Kelly assuming he is not traded or cut. Kelly has consistently disappointed for a long stretch dating back to last season. Danny Pinter, who has been unable to supplant Matt Pryor at right guard, has been decent when Kelly has been forced out due to injury. Pinter and Kelly should both get run at the center position in camp to allow the coaching staff to evaluate whether or not the current starter should continue to be the future for the Colts at the position.

The same story applies at right guard. I would not be opposed to signing a veteran option while simultaneously drafting a rookie on Day 3. If the Colts were to sign Nate Davis away from Tennessee however, he would more than likely win the competition and give Indianapolis above average guard play. Davis is a former third round pick from Charlotte, who has started 46 games for the Titans. Tennessee may decide to let Davis walk in favor of recent second round pick Dillon Radunz, which would give the Colts the opportunity to swoop in and pick up the fourth-year player. A competition between Nate Davis, Will Fries, and a mid-round rookie would provide competition and depth to the Colts’ offensive line that is sorely lacking in both departments.

If the Colts acted on this intuition this offseason, the offensive line room could look something like this after final cuts are made to the 53 man roster in 2023.

The reality is that we have no idea how the rest of the 2022 season will play out, or who will be in charge of the decision making after it does. The Colts could hit the reset button and enter a rebuild or aggressively attack the quarterback position with youth and reload on the offensive line as I have proposed. The core of this Colts offense looks like it could once again be primarily built upon the shoulders of its playmakers, much like it was during Indianapolis’ run of dominance in the AFC South under Manning and Luck. What’s missing however is the most important ingredient and the glue that holds it all together. Are Chris Ballard and Frank Reich the men to find these rarities? As cliché as it seems, only time will tell.