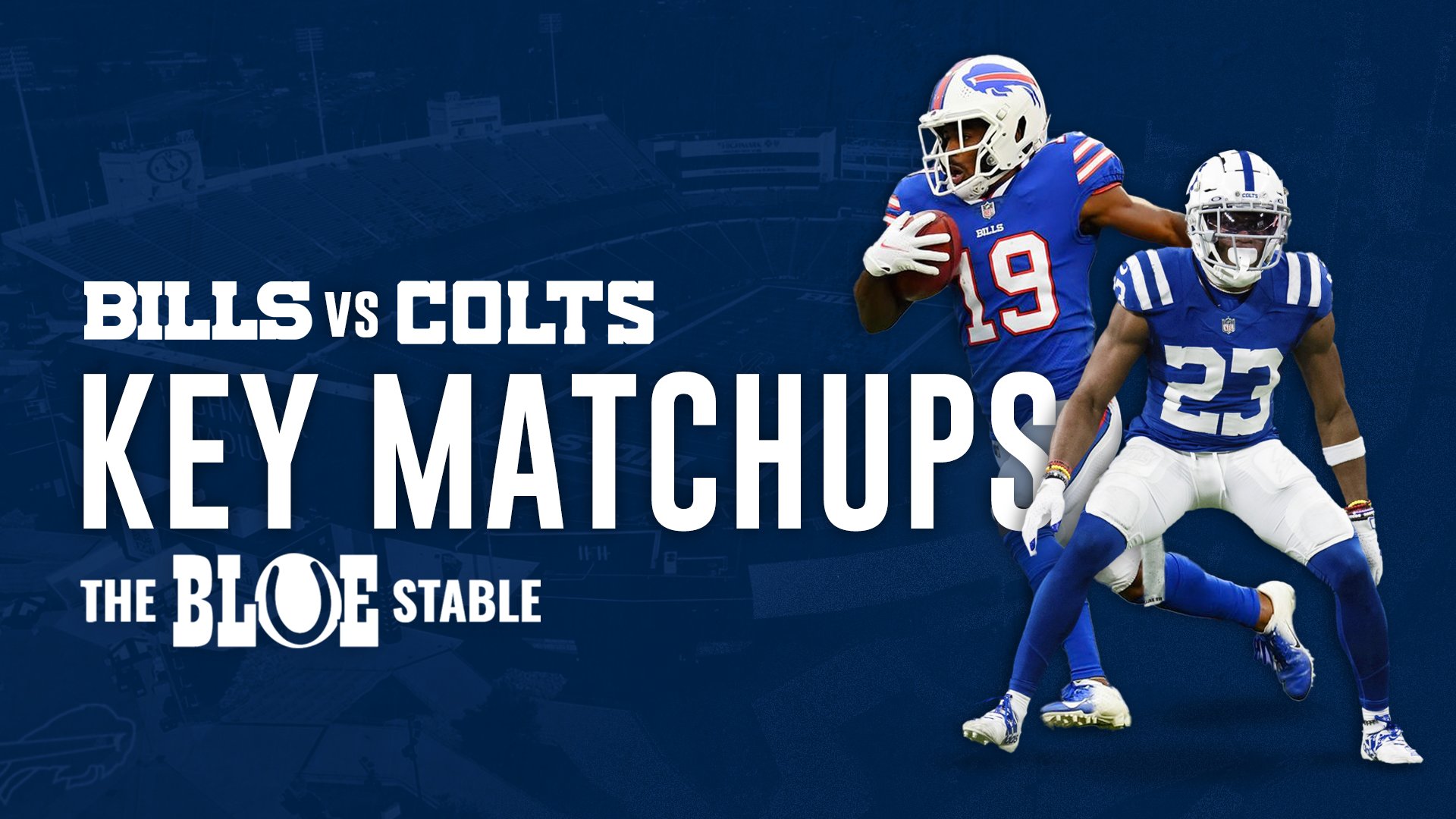 Previewing the Key Matchups Ahead of Preseason Game #1 vs. Buffalo

Home » Previewing the Key Matchups Ahead of Preseason Game #1 vs. Buffalo

On the night of August 5th, Highmark Stadium in Orchard Park, NY was buzzing with nearly 36,000 Bills fanatics as Josh Allen came charging out of the stadium’s tunnel with a helmet that would give former Bills quarterback and current Colt’s head coach Frank Reich some nostalgia. The classic red helmet represented a blast from the past, and set the Bills fanbase ablaze with talk of possible alternate uniforms in the future.

However, it wasn’t just Josh Allen’s fiery red headgear that was the talk of Bills’ practice that night. Gabriel Davis, a former 5th-round pick, hauled in two long catches over the course of the practice and, along with Isaiah McKenzie, have highlighted the non-Stefon Diggs pass catchers in Buffalo.

2nd-year player Greg Rosseau has also made an impression on both the Bills coaching staff and recent offseason acquisition Von Miller. Miller commented that he has been feeding Rousseau “Gasoline and gunpowder” to fuel what has been a destructive player all camp.

Beyond just evaluating breakout camp stars like Dulin and Ogletree for the first time in-game action, August 13th will begin to shed light on some of the burning questions that cannot truly be answered until the live bullets start flying.

So what matchups should you be paying special attention to when cleat finally meets ball to signify the first game of the Colts’ 2022 preseason?

Frank Reich commented earlier in training camp that the first team offense and defense would get a little more run in the preseason games than usual. This should allow us to see the two new members of the starting offensive line in action against some formidable competition.

As mentioned in the intro, Greg Rousseau is showing out in Bills camp and looks poised to have a breakout sophomore campaign. The former first-round pick has been working with future Hall of Famer Von Miller to enhance his development as a pass rusher, and according to reports, the hard work has been paying dividends early.

It will be intriguing to see how Danny Pinter fares early on against the likes of Rousseau and Ed Oliver, as they have the versatility to rush inside and out. Pinter has been slotted in as the heir to Mark Glowinski at right guard, a role that the offense will count on to be solid. The former 5th round pick will be tested early and often this Saturday, as fans will get a glimpse of whether or not he is up to the task.

The same goes for Matt Pryor, who has the left tackle position locked down thus far, a little over halfway through training camp. We’ve seen limited reps from Pryor at the blindside protection spot during real game action, and yet when he was forced to slide in last year, he did a commendable job. The former TCU Horned Frog will be tried early and often this Saturday when he’ll be tasked with blocking Von Miller. If the offensive line holds up early on against the Bills’ starting defensive line, Colts fans should have a good idea of the success the position group could see this season.

This rookie versus rookie matchup could provide some highlights as well as invaluable experience and tough competition for both men. If the Bills are struggling anywhere right now, it would be with secondary depth. Tre White is out after tearing his ACL last year, which leaves the cornerback job up to Elam, Dane Jackson, and Taron Johnson. Both Pierce and Elam have been going up against elite competition in camp with Stefon Diggs and Stephon Gilmore, but finally having a different jersey in front of them should bring out their best. I’ll be following that matchup closely come Saturday.

According to reports, Isaiah McKenzie has had one of the best training camps of any Bills player up to this point. He’s taken the opportunity to seize the starting slot role in a stacked wide receiver room and run with it. Kenny Moore will be opposing him when the Colts go into nickel coverage with three cornerbacks. The dynamic slot cornerback will give McKenzie a chance to test himself while providing a challenge for Moore on the flipside. Even Kenny Moore himself would admit he didn’t play his best football down the stretch last year, so it would be great to see him blanket McKenzie who has been the story of camp in New York.

Matching up against James Cook and Devin Singletary, two running backs who can do a lot of damage catching the ball out of the backfield, could be a determining factor in which of the undrafted linebackers make the roster. Sterling Weatherford, JoJo Domann, James Skalski, and Forrest Rhyne are all fighting for the 5th linebacker spot in camp. When they get the chance to cover either Cook or Singletary later in the game on Saturday, it will be fascinating to see who can corral both Buffalo running backs in space or if they can cover either one on angle, swing, and slip routes.

As a former safety at Miami Ohio, Sterling Weatherford has as good of a chance as anyone at being up to the arduous task. When Chris Ballard and company congregate to make roster cuts at the end of training camp, it may come down to who performs the best in tough situations like this Saturday will undoubtedly provide.

The first preseason game is the beginning step in solving the giant puzzle that will eventually form to be the final 53 man roster. The 4 matchups I’ve highlighted should be ones you look for come August 13th.