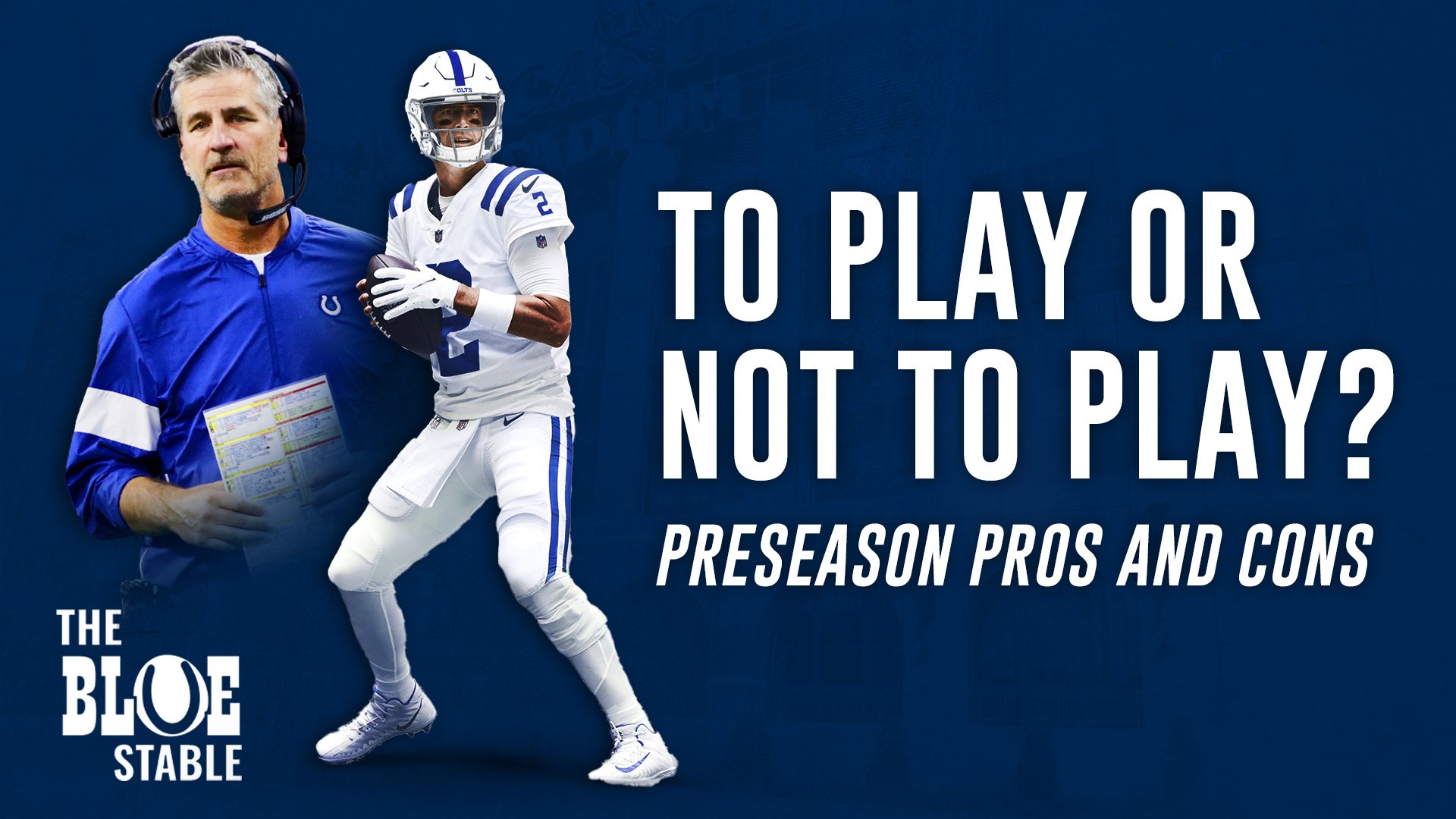 To Play or Not To Play: Preseason Football Pros and Cons

Home » To Play or Not To Play: Preseason Football Pros and Cons

Professional sports give life to so many across the globe. Those participating get to compete with the best of the best in their respective field. Those cheering from the stands or at home feel emotionally invested in their teams and the players who put on that jersey. And a feeling they both share is the utter heartbreak when a player goes down with an injury. Most injuries are nearly impossible to predict or prevent, no matter the precautions taken. The only sure-fire way to avoid an injury is by the player sitting out of the game entirely. 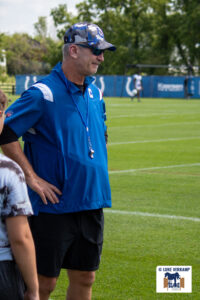 A HOT topic of discussion recently has been whether or not proven players should play during the preseason. Colts Head Coach Frank Reich has decided that most of the starters will play roughly a quarter during the team’s 1st two preseason games and up to a half during the preseason finale treating the game as “a dress rehearsal.”

If the outcome of preseason games doesn’t matter to teams, should proven players be out there? Is there any reward for the Colts that outweighs the risk of losing key players? To play or not to play, that is the question.

They’ll play the starters a little in W1 (at Buffalo) and W2 (vs. Detroit) but they’ll treat the W3 game vs. Tampa Bay as the dress rehearsal. Expect Matt Ryan and the starters to play up to a half in that one.

The Colts have made it clear that the slow starts in the past can’t continue. The team hasn’t won a season opener since 2014. Last year the team opened the year 0-3 and fell to 1-4 shortly after. They had an uphill battle from week four on to get back into the playoff conversation.

A lot has been said about the team’s inability to punch their playoff ticket with a win and get in scenario the last two weeks of the season, but if the team could have gotten the job done early in the season, they wouldn’t have been in those situations at all. So to better prepare for the regular season, they could use the preseason snaps to have the team firing at full power out the gate instead of coming out flat. 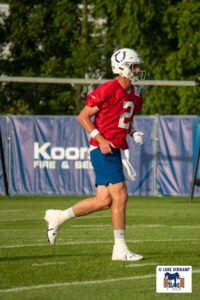 This season the Colts will be led by yet another new QB in Matt Ryan, making it the fifth different starting QB in five years. Since the pads came on in training camp, the defense has had the offense’s number for the most part. So, using the preseason to get Ryan and most of the offense on the same page and ready to roll for week 1 makes a lot of sense for the team.

While preseason football is the closest thing to the regular season, teams get to use it to prepare for the regular season; however, they are not the same. For example, no team is comfortable opening up their entire playbook during the preseason. The reason is that they don’t want to give their opponents any extra footage on their play.

On defense, this leads to softer and safer coverage schemes often being called and simpler rush packages from defensive lines. So the question that needs to be asked becomes: if the style of play the offense is facing is so bland, is it actually helping the Colts’ offense prepare for the regular season?

Every single snap a player is on the field, there is a risk of injury, but the preseason adds some unique elements. One of those is the number of fringe players battling for one of the 53 roster spots that have extra motivation to make a splash play any way they can. This adds additional risk to players playing special teams and on the offensive side of the ball as most “splash plays” the opposing team can perform require contact.

Another is that this is the first live-game action players have seen all offseason, meaning multiple players are not in peak football shape. This can lead to multiple body parts being at a higher risk of an injury occurring with or without contact.

I decided to do some research to understand if injuries occur at a higher per game rate in the preseason than in the regular season. In February, nfl.com released injury information from 2015-2021, focusing on various injuries, including concussions, ACL, and MCL injuries. The data shared the number of said injuries that occurred and whether they occurred during the preseason, regular season, or playoffs. 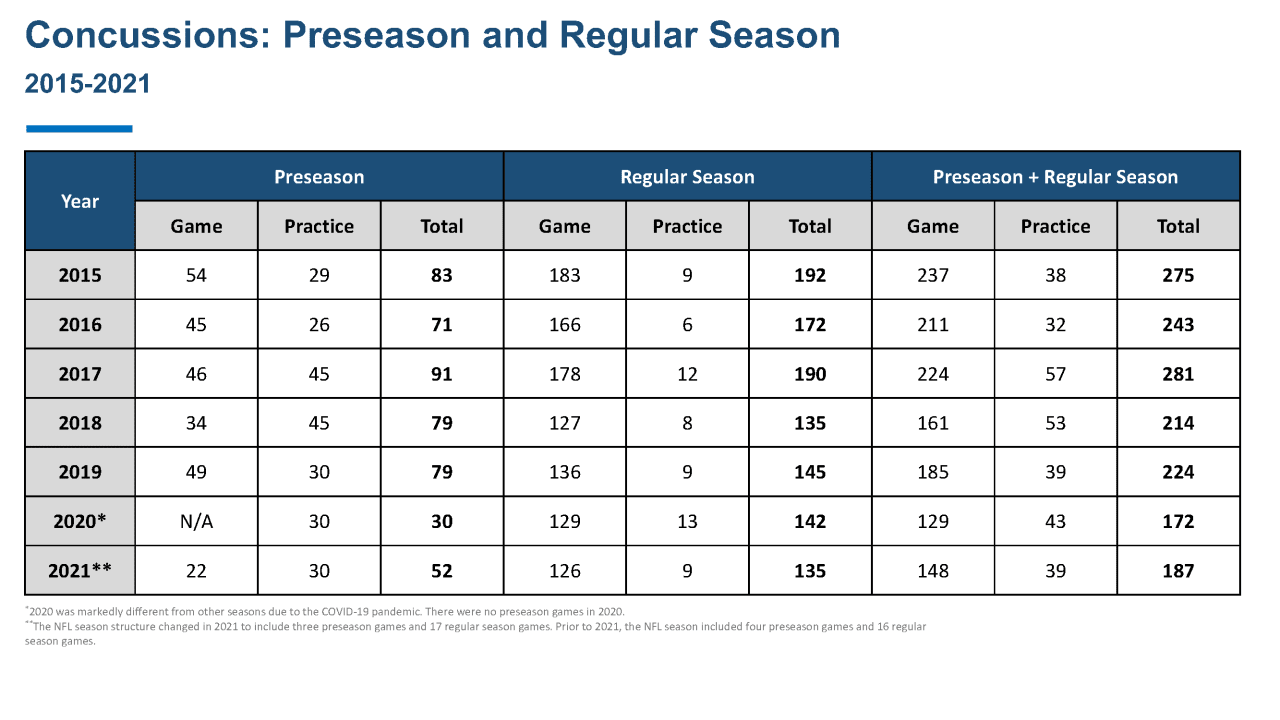 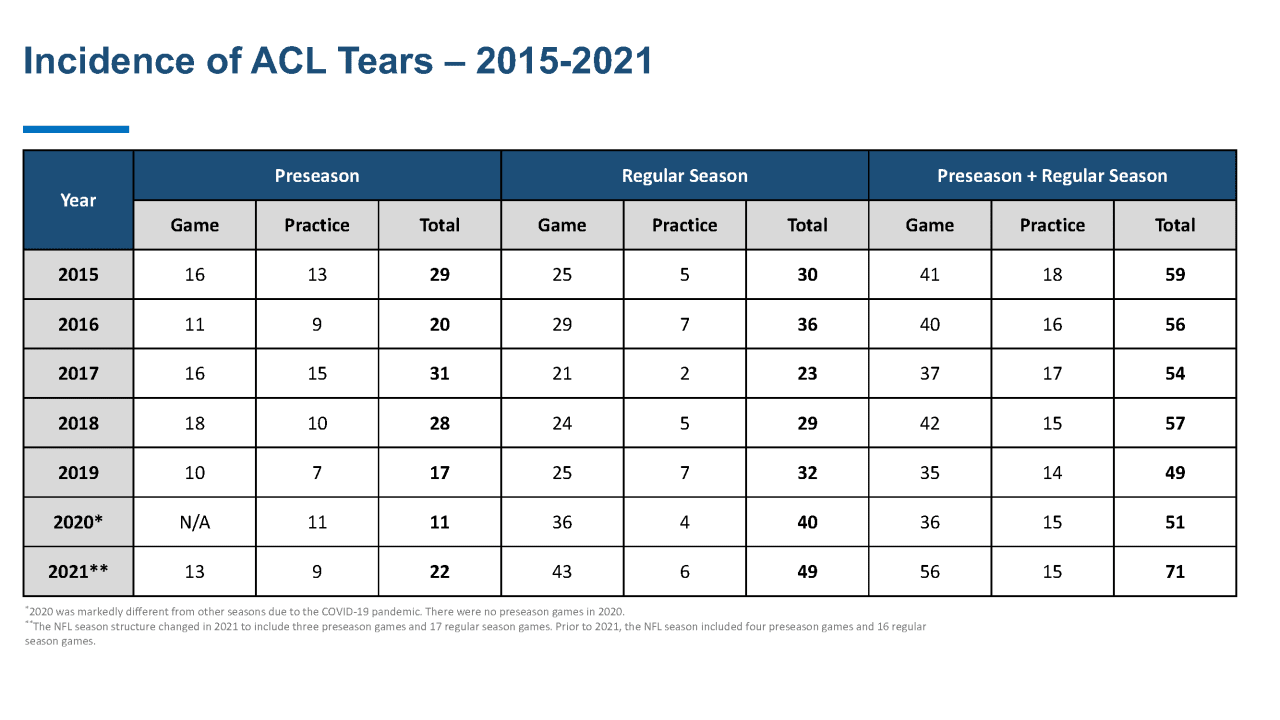 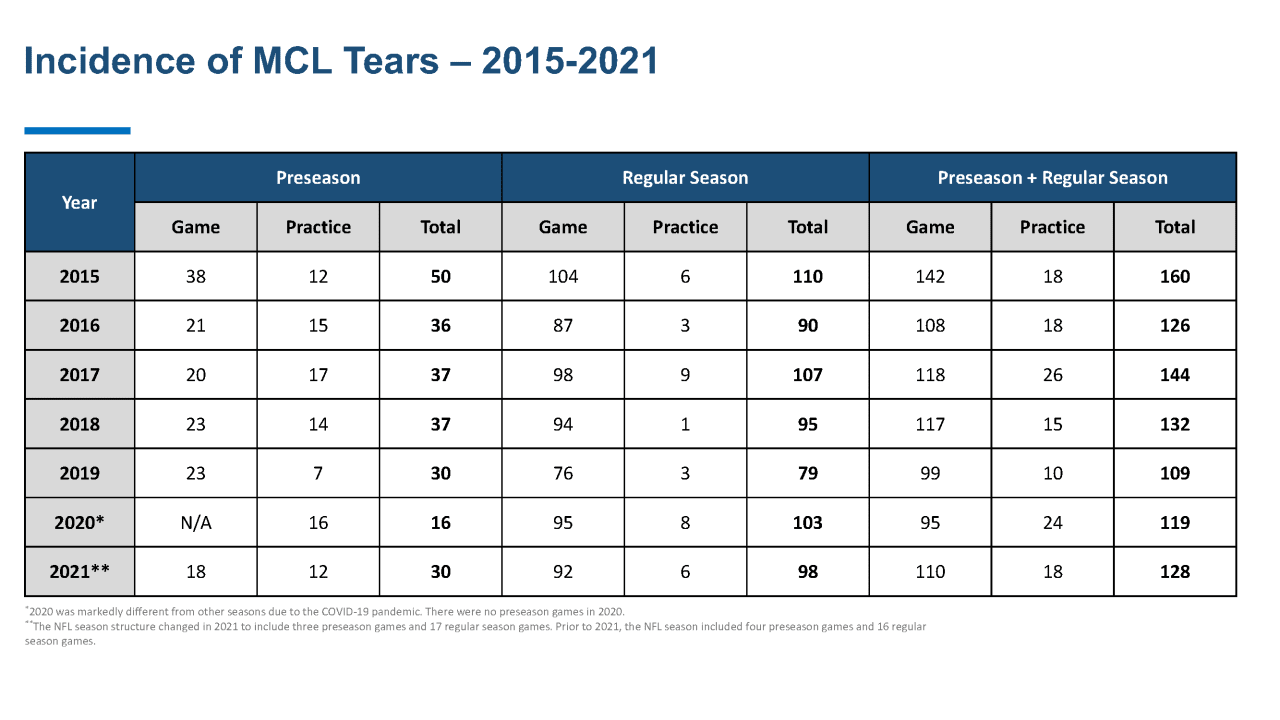 All the graphs above, as well as more information, can be found at Injury Data Since 2015 (nfl.com)

I decided to total up each year provided minus 2020 (because there were no preseason games) to see how often each occurred during the preseason games as opposed to the regular season games.

What Do the Players Want?:

Embed from Getty Images
I had the privilege of speaking with former Colts CB Jerraud Powers, who was with the team for four seasons from 2009-2012 and is the co-host of the Blev in Colts podcast on the Bleav Network. Powers dove into his thoughts on preseason from when he was a player to now.

Q: “How important did you view the preseason when you were playing?”

A: “Early on in my career, I viewed it as HIGH importance with guys coming back from injuries or just simply not playing football over the offseason.”

Q: “How often did you play in the preseason throughout your career, and did it change via the teams you played for?”

A: “Honesty throughout my career, it was pretty consistent about 1-2 drives, and the higher up on the depth chart I was, the less reps I usually would get.”

Q: “How has your view on the preseason changed going from being on the field to watching as a fan?”

A: “I just love football, man; being a former player, just finding any football to watch and study is big for me. The NFL has for sure shown that they view them in less importance as they’ve taken away one of the four games down to 3. And I could see them continuing to takeaway games from 3-2 and 2-1 and so on with how they treat the preseason as a whole.”

Q: “What are your thoughts on Coach Reich’s choice to play starters in the preseason at a higher rate than normal?”

A: “I wasn’t shocked; all teams are trying to find ways to deal with only having three preseason games. I felt like Frank’s approach seemed pretty standard to how the first three games were used previously outside of the larger amount of snaps week 1 with the starters playing all the way to the first quarter. I still don’t see any of the key contributors being out there unless they feel they need the reps to be out there to be prepared for week 1.”

Q: “Who are some of the key players you wouldn’t put out there for the 1st preseason game?”

A: I wouldn’t have Buckner out there, he dealt with some injuries last year, and we know who he is already. I wouldn’t personally give him any snaps in game 1 just so we don’t see any injuries reaggravated. If I had to pick another, usually I would say Matt Ryan with all hes proved in his career, but I fully understand Franks’s approach with him being new to the team and gelling with the new teammates. Taylor is another I wouldn’t put out there this first game. Knowing he is going to have a high workload throughout this year, and if he goes down, that’s going to hurt your offense tremendously. I know he hasn’t dealt with many injuries yet in his career, but we know the type of player that he is, and preseason snaps aren’t needed for him to be ready for week 1.

When asked, “With the new team and new personnel do you think the preseason means a little bit more than it normally would?”

Ryan was also asked, “Do you want to play in the preseason?” as a follow-up question, and he responded by saying, “I’ve always liked getting out there and getting some reps and doing those kind of things, but that’s not my call.”

Nelson has always been someone who doesn’t beat around the bush. So it should come as no surprise how he answered the question, “Are you looking forward to playing Saturday, or would you rather rest.” Nelson responded by saying, “What type of question is that?”

When asked the follow-up question of, “Do you want a quarter or a couple of series?” He quickly answered, “I want to play, yeah, are you kidding me?”

Blackmon is coming off a season-ending torn Achilles last year during practice and has looked way ahead of schedule to begin training camp. When asked, “Do you anticipate being out there on Saturday?” he quickly said, “Absolutely.”

All of these full interviews and more can be found at colts.com/video.