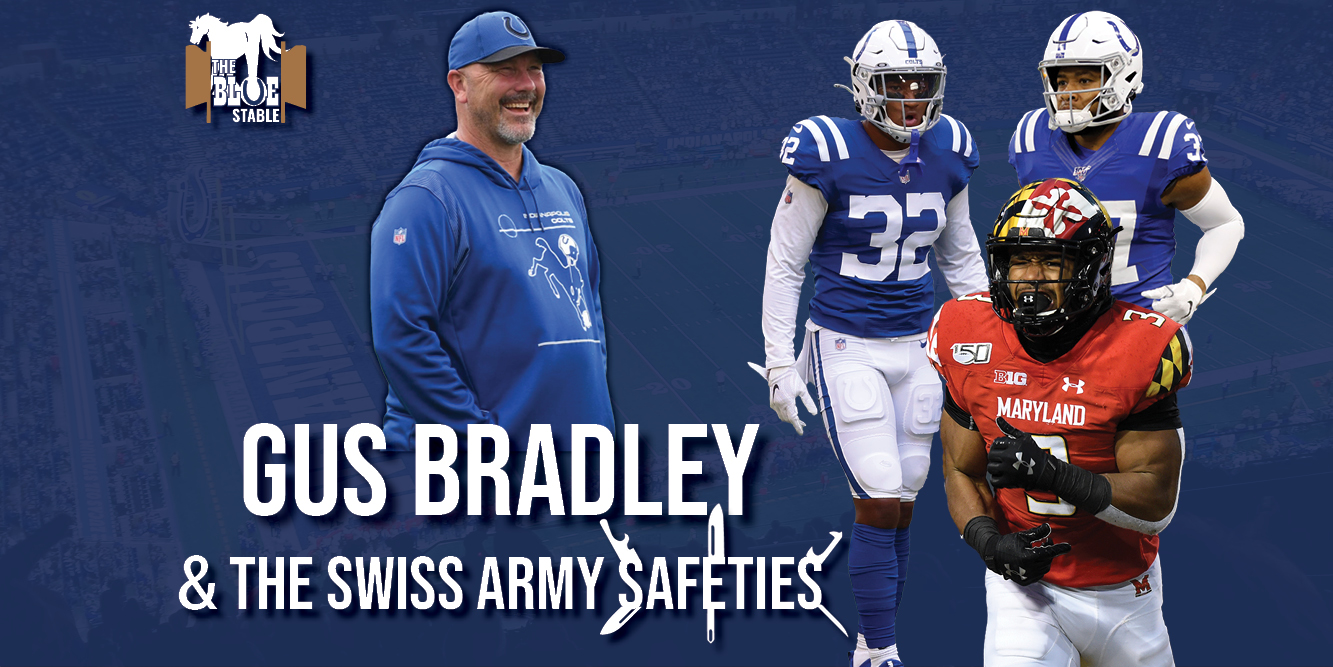 When the winds of change drifted down from Lake Michigan to Indianapolis this winter, they returned to Chicago carrying along former Colt’s defensive coordinator Matt Eberflus. There was mixed reaction amongst the Indianapolis fanbase on whether or not a new face was needed at the position to begin with.

After an extensive search, the Colts brain trust decided the former savant behind the “Legion of Boom”, would be the next man to lead an already well-tooled Colts defense. Gus Bradley comes to Indy with an impressive resume but needs to prove he can take a Colts’ defense that is very good on paper, to elite on the field.

Stephon Gilmore and Yannick Ngakoue have entered the fold, while Kwity Paye and Dayo Odeyingbo are ready to make a sophomore year leap. All the names you have become accustomed to on defense will hopefully be healthy and ready to go Week 1, too.

All told, there is little excuse for Gus Bradley’s crew to not be a top 5-10 group next year.

Embed from Getty Images
The former paragraph provides a summary of the Colts defense’s offseason from a macro sense. However for those of you who can’t sleep until you’ve uncovered how Gus Bradley’s scheme will change the way the Colts play defense in 2022, consider this article a lullaby.

When Khari Willis entered the league in 2019, he was considered to be a smart, reliable tackler who would be better in the box than as a primary deep zone defender. In the three years since, Willis has proven to be an average to slightly above average safety in a scheme that was asking him to play away from his strengths a majority of the time.

In Matt Eberflus’ primarily Tampa 2 “Middle of Field Open” (MOFO) base defense, Willis was often tasked with covering a deep half of the field or a quarter of the field in cover 4.

Under Bradley’s watch, especially on first and second down, the former Michigan State Spartan will play in the box more frequently in base cover 3 calls in which the middle of the field will be “closed” (MOFC), or in other words occupied by a safety.

One of the preeminent hallmarks of Gus Bradley’s defense is putting his players in a position to think less so they can play fast. The base cover 3 shells allow a strong safety that is playing in the box to only have to exchange zone or spot drop responsibilities with the linebacker to the weak side. This level of flexibility permits Gus Bradley to use his strong safety as a “chess piece” or as the title suggests, a swiss army knife.

The fluidity of the strong safety’s responsibilities in the Bradley defense allows for secondary disguises and late safety rotations to be easy transitions for the defense while consequently befuddling opposing quarterbacks. We can model this by using an example of a third and long situation in which Bradley switches the alignment of his defense into a two-high look.

The former Raiders defensive coordinator could then roll out a big nickel package in this situation while playing Kenny Moore at the outside corner position and have a third safety, likely rookie Nick Cross, line up next to Julian Blackmon.

Embed from Getty Images
This would leave Khari Willis matched up in the slot against either a tight end or slot receiver. The Colts would probably favor the 6-foot 220-pound physical safety versus a tight end rather than a twitchier, more agile slot receiver. If Willis happens to be lined up on a slot receiver, this is where Gus Bradley can reach into his bag of tricks and pull out a rare blitz.

From a two-high shell on third down and long, the quarterback is probably expecting a variation of quarters coverage or even cover 5 (cover 2-man). This is where Bradley could throw a wrench in things by bringing Khari Willis off the edge from his slot position as a blitzer and rolling the rookie down to defend the slot receiver. The former Spartan has proven he is a highly effective blitzer when given the floor, and with the to chance to convert more sack opportunities from the box, I’d smash the over on any Khari Willis sack bets.

Embed from Getty Images
What other coverage wrinkles has Gus Bradley implemented in the past that Colts fans should be aware of? As I noted previously, while Bradley’s defenses typically sit in a cover 3 shell, the one high look is a dead giveaway to quarterbacks that the defense will be playing cover 1 or 3. The Colts’ defensive coordinator has adapted to playing more cover 4 on third down.

Instead of just playing straight-up spot-drop quarters, Bradley instead uses a coverage known as “palms”. Palms is a match quarters coverage that is similar to cover 6 in that it is a split between cover 4 and cover 2. The split coverage variation allows for cornerbacks to play aggressively and jump out routes from the number two receiver while the safety carries the outside receiver vertically.

Another coverage Bradley has accoutered his defenses with in the past are two different variants of cover 5. Cover 5 is essentially a two-high man look to incorporate on third down so your cornerbacks can cover the flats aggressively. The technique used most often in this coverage is called “fist”.

Here, the safeties shade over the top while the cornerbacks undercut any route that breaks sharply. Bradley also uses slice calls in cover 5 to get his safeties involved in the aggressiveness. Look for Julian Blackmon to excel when asked to anticipate in-breaking routes from these slice techniques. The third-year player has shown time and time again his impeccable instincts and nose for the football produce turnovers.

If Bradley utilizes these coverage checks to free up Blackmon to be more aggressive, his ball production could rival that of the top safeties in the NFL.

Embed from Getty Images
I love the idea of Gus Bradley incorporating more big nickel packages into this Colts defense, because it will create unique situations in which all three of the Colts’ safeties can be together on the field at once. With Willis playing closer to the line of scrimmage more frequently, Bradley can get creative with fire zone blitzes that disguise which players are coming and who is dropping into coverage.

Whatever Bradley dials up on Sundays this fall, you can be assured that whoever is playing the strong safety position is versatile enough to not just be a blade, corkscrew, or pair of tweezers, but rather a swiss army knife.