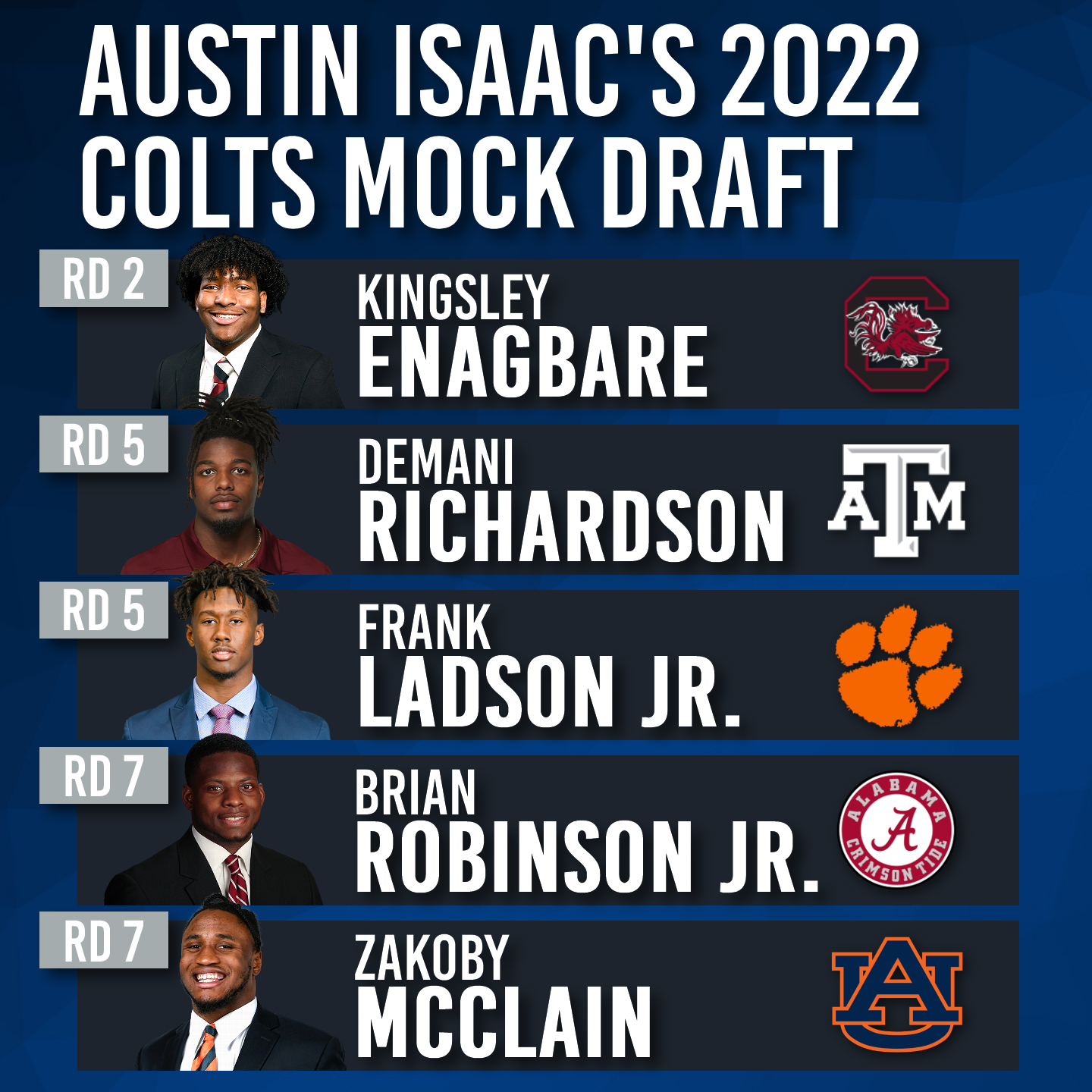 We’re getting closer to the midseason mark, which means it’s everyone’s favorite time of year: draft season. And as the season goes along, the holes on this team become more and more apparent. With GM Chris Ballard rarely going on a spending spree in free agency, the draft is the main form of team building for this organization. Unfortunately this year, it seems like the Colts won’t have a first round pick should Carson Wentz continue to play (via trade with Philadelphia). Although Indy is no stranger to missing a first rounder as this would be the 3rd year Chris Ballard has traded out of the first round.

The three top needs on this team are almost undoubtedly CB, OT, and EDGE. Personally I believe it is in that order, but that’s up for debate. The pass rush we’ve been getting over the last few years has been lackluster to say the least. Actually, it’s been lackluster for the last decade. The Colts have only had two pass rushers with double digit sacks since 2013 (Justin Houston in 2019 and Erik Walden in 2016) and the last time they had two pass rushers with double digit sacks in a season was 2010 (Mathis and Freeney in 2010). The issue now isn’t the fact that we have not been drafting pass rushers (5 taken in the first 3 rounds since Chris Ballard became GM). It’s more so that we haven’t hit on any. The career leader in sacks by an edge rusher through the last 5 drafts for Ballard is Kemoko Turay and he has yet to even hit 10 career sacks (currently at 8.5). One of the biggest issues for the Colts has been the inability to get to the QB. Kingsley Enagbare could solve that

Enagbare feels like he really fits Ballard’s style of that solid blend between pass rusher and run defender. After all, that’s essentially what he took with Kwity Paye in the 2021 Draft. With Kemoko Turay and Tyquan Lewis in contract years and Banogu being in one in 2022, Kingsley Enagbare could be a solid threat opposite Paye and with the two having the last great Indy QB-hater as their coach, they could grow to become the next big pass rushing duo for the Colts.

With the retirement of Anthony Castonzo last year came a clear wave of panic of what to do at the left tackle spot. After Ballard opted to not take one in the 2021 Draft, they signed Eric Fisher. A tackle coming off an Achilles tear in January isn’t exactly ideal but they were out of options to protect the blindside of their new QB. Fisher hasn’t exactly been stout this year thus far, so Ballard spends his last day 2 pick on the most important position on the offensive line.

Depth is going to be key on the o-line, so signing a decent backup in free agency (or even re-signing Eric Fisher) would be the place to start as most of the offensive tackles in this class outside of the first round aren’t exactly opening starters. But I do believe Rasheed Walker is as close as it gets. 6-foot-6, 320 pounds out of Penn State, Walker is a mountain of a man. He has the power and occasional athleticism you look for in a left tackle and has made 22 straight starts. He has the traits you can’t teach and for what needs taught? That’s why the Colts have a Hall of Fame offensive lineman helping coach the big boys up front.

The other biggest need for the Colts is a true CB1. They currently have Xavier Rhodes on a one year deal, but he will be 32 next season and is unlikely to re-join the team. The last top cornerback the Colts had was probably Vontae Davis (whose last good season was in 2015). Before that, who? Marlin Jackson? Kelvin Hayden? Point is that it’s been years since opposing quarterbacks have had to fear throwing at one specific corner on the field. Rock Ya-Sin hasn’t quite worked out (but the jury is still out on him) and Isaiah Rodgers has been primarily used as a return man up until recently. Sevyn Banks could change that.

At the beginning of the season, Banks was considered a first round pick and one of the top corners in the draft. After missing the first few games, he’s lost a lot of hype, but the potential is still there. He fits Ballard’s mold as that big, physical corner he always wants and he is very solid in coverage. He plays all over the field, but is primarily used on the perimeter and does a great job of shadowing his man and breaking up passes. This is only his second season as a starter and he has only played 2 games, but if he is available in the 4th round like he was in this mock, he has to be the selection.

One of the major issues Indy has been facing this year is their lack of depth at safety. Andre Chachere was a camp and preseason standout, but unfortunately did not make the final cut for the team. The Colts ended up signing Andrew Sendejo as their depth piece to pair with George Odum as the only two backup safeties on the team. That certainly showed when Julian Blackmon went down and Sendejo had to step up. And everytime Sendejo is on the field, he seems more like a liability than he is a help. Demani Richardson is another player that seems to fit Ballard’s mold for a safety. A very versatile, physical player, Richardson can play both free and strong safety, as well as in the box if needed. He’s a great tackler and a big hitter, but a little suspect in coverage. At the very least, he’s a great depth piece, but would be good for any 3-linebacker sets the Colts put out.

A former 5-star recruit, Frank Ladson Jr. was expected to have a bigger role this year. Unfortunately a lackluster Clemson offense combined with the season-ending surgery Ladson received a few days ago ended that abruptly. He is a solid deep threat but has yet to be able to show what he can do with his ability to run vertical. And a 6-foot-3 vertical threat is never a bad thing to have. He has not quite gotten the chance to real his true potential through his 3 seasons with the Tigers, but should he come out this year and not opt to return for his senior year, he could be a solid late round pick.

Last season was the first season without CJ Henderson and Trey Dean and Kaiir Elam were being considered to be one of the best cornerback duos in college football. Eventually, Trey Dean made the switch to safety due to his lack of ability to play man coverage (which Florida runs almost exclusively), but the ability to play zone (which the Colts run a lot) is significantly better. It’s actually his poor man coverage that is keeping him draft stock low, as he was a projected first or second round pick only last year. Whether the Colts keep him at safety or move him back to corner, he will likely still be effective.

With Marlon Mack likely being traded and Jordan Wilkins in a contract year, the Colts are going to need a third running back on the roster and who better to pair with Taylor and Hines, than a downhill aggressive runner in Brian Robinson Jr. from Alabama. Stuck behind the likes of Damien Harris, Josh Jacobs, Najee Harris, Bo Scarbourough, and even Jalen Hurts rushing the ball over the last 4 seasons, Robinson is finally getting a chance to start and is doing a solid job so far for the Crimson Tide. As of right now, Robinson is on pace to be yet another 1000 yard rusher for Bama. If he had other aspects to his game, he’d be a much higher pick, but a dollar store version of Derrick Henry would not be a bad 3rd option in this Colts RB room.

The Colts east coast scouts have had their work cut out for them this draft. Not one player on the west side of the Mississippi, but that’s just how it played out. With the last pick of the draft, the Colts pick up more linebacker depth that may be much needed at this point. With Matthew Adams and Zaire Franklin being in the last year of their deals, it may be easier for Ballard to draft another linebacker than it would be to give out more contracts. Zakoby McClain is a great depth piece and is a very good zone cover backer, and excels in tackling (113 tackles last season). He isn’t exactly the biggest guy, and there are much better athletes than him in this draft, but he could work very well in sub-packages.