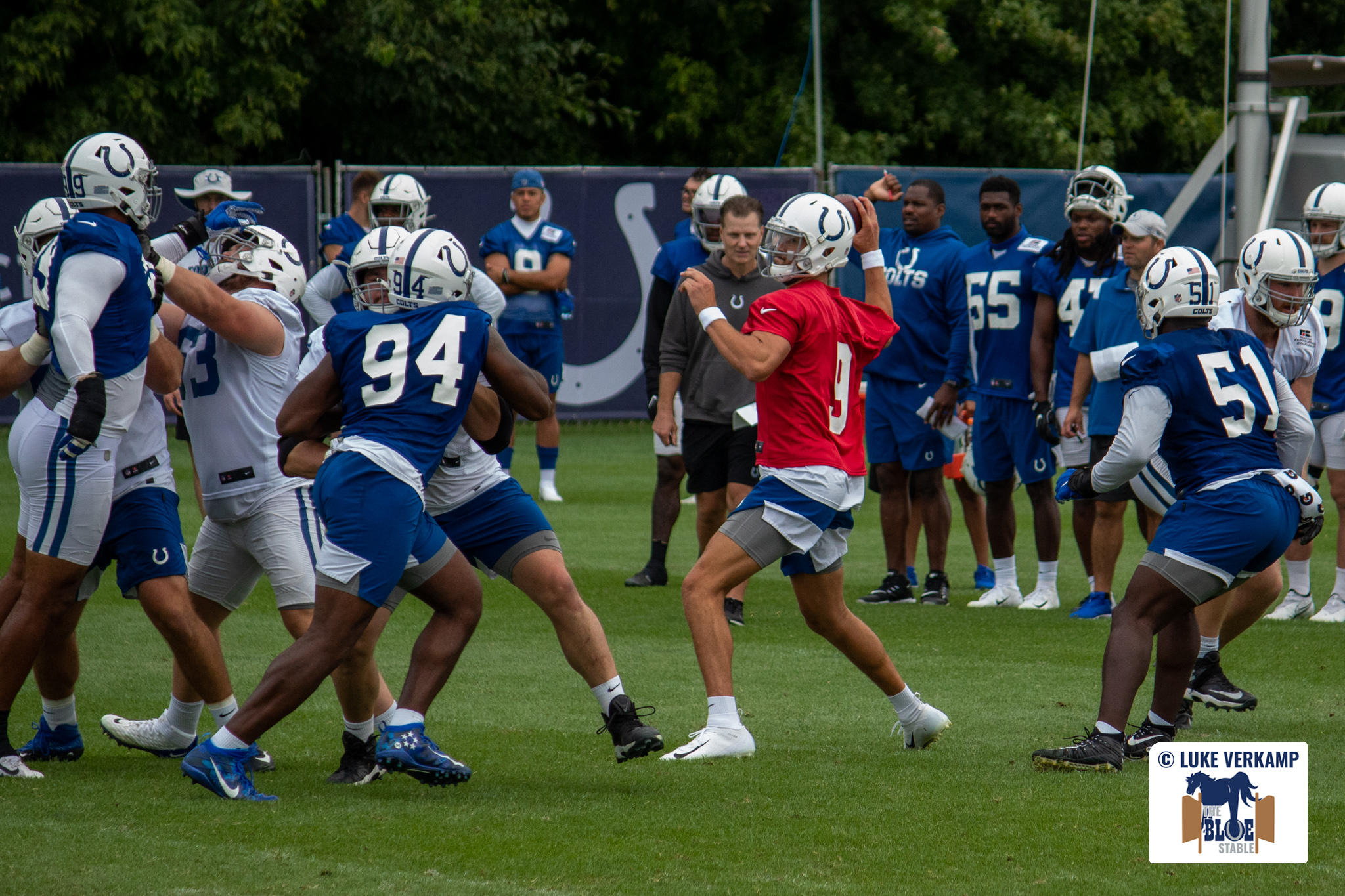 It wasn’t pretty, but the Colts were able to grab victory from the jaws of defeat in Minnesota on Saturday. Neither offense established prolonged success or finished their drives, making this a game with 0 offensive Touchdowns on both sides. While the game wasn’t a huge highlight producing shootout, there were several big takeaways from the game.

Kwity Paye played his first NFL snaps yesterday, and the rookie did not disappoint. He only played in the first half, but Paye was a menace to the Vikings Tackles. He displayed strong explosiveness, strength, speed, bend, and pass rush development. Just look at the Up & Under combined with his insane first step and strong hands vs. Rashod Hill.

This is actually a set of moves by Kwity Paye
Looks like a swipe to set up the arm under and finish and it’s beautiful and for a guy who really didn’t show a diverse set of rush moves at Michigan this is awesome to see pic.twitter.com/rAV4BOGsYB

Paye did an effective job in run stuffing too, able to set the edge and prevent any major runs on his side + get a Tackle For Loss. Kwity’s development will be essential for the Colts in 2021 and beyond, as Paye has certifiable freaky athleticism. So far, it looks like he has been working to develop as a pass rusher and develop his moveset. Should he continue on this upward trajectory, the Colts could have a star Edge Rusher that they have lacked since Robert Mathis’ 19.5 sack 2013 season.

Jacob Eason and Sam Ehlinger did not impress for a variety of reasons on Saturday. Ehlinger got the start and was more efficient on a per throw yardage basis and in completion percentage, going 8/13 (61.54%) for 70 yards for 5.38 yards per attempt. While Ehlinger did have an edge in those regards, the yards per attempt is still well below the average for current NFL QBs, showing a heavy reliance on the short passing game and yards after the catch to generate offensive movement. Not ideal, but you can win with that “Death by 1000 Cuts” approach. The big key is to have strong accuracy, quick reads, and good decision making to pick apart defenses there. On that, Ehlinger needs work, as he had 2 costly INTs. In fairness to Ehlinger, both of the INTS were tipped.

Ehlinger’s lack of height and effective pocket movement caused his first INT to be tipped at the line of scrimmage, altering the balls’ path and movement and resulting in Parris Campbell having a harder time trying to catch it. It hit Parris, popped up in the air, and a nearby was able to make a heads up play to catch and run with the INT, resulting in the only TD of the game being a pick 6. Ehlinger was making a quick read into very tight coverage; even if he adjusted his pocket movement to get around the defender’s swat, there is no guarantee that Parris would make the catch in that situation. It was not a good play by any stretch for Ehlinger, and while Parris *could* have caught it, he wasn’t put in a great position by his QB.

The 2nd INT was another throw into a tightly contested window that was tipped by a receiver. While Pittman should have caught it, and this INT was less on Ehlinger than the previous one, the placement could have been a bit more in front of Pittman to keep the ball away from the defender. Ehlinger threw an accurate pass, but he didn’t throw the “throw the ball to where only your guy can get it” pass needed in the situation. Is that overly nitpicky? I’d admit it is, but the young rookie still has a ways to go on his development after last night.

Jacob Eason, meanwhile was less efficient, going 16/27 (59.26%) for 132 yards and a 4.89 ypa. While Eason didn’t cause any turnovers, he was unimpressive with a lack of touch and rhythm with his receivers. Several of his throws sailed just past the hands of his receivers on the deeper routes, while on the shorter throws, he was throwing the ball so strongly at point blank range it was harder for receivers to come down with it. Eason certainly has the arm strength to make nearly any throw, but he needs to know when and where to use those high velocity throws and improve his accuracy and reads.

Neither young QB separated themselves for the QB2 job, leading to week 3 of the Preseason being a crucial game for both QBs to cement themselves in that role for 2021, with the chance to start the season as the starting QB while Wentz recovers. So both of their NFL futures will have a big impact from this next game, and hopefully, one if not both can impress.

Turn Off The Tevi

Speaking of making a bad impression, Tevi has not been good. At all. He had more than earned his bad rep before coming to the Colts, allowing more sacks and pressures than any other LT the last 3 years. So far, he has looked every bit as bad as that stat projects him to be. There hasn’t been development from him, but more disappointment this offseason. Putting him at either tackle spot during a pass play without a double team or a chip block is a recipe for disaster for the Colts. Hopefully, Fisher gets back soon and stays healthy after because the options at blindside pass protector are not pretty without him.

In a game where neither team can finish their drives, the deciding factors are: Turnovers, Defense, and Special Teams. While the Colts didn’t win the turnover battle but did win the defensive battle, the true X-factor was kicking on both teams. While Vikings Kicker Greg Joseph was 1/2 with a long of 49, that miss ended up being the deciding factor in the game. A shame too, as he had made 18 straight field goals in practice and preseason before that. But the Colts Kickers have yet to miss a FG throughout Training Camp or preseason (*knocks on the nearest piece of wood*), causing the Colts to have an excellent problem to have a tough decision yet ahead. Eddy Pineiro went 3/3 with a long of 50, while Rodrigo “Hot Rod” Blankenship went 1/1 with a long of 47. All 3 kicks were decisively in the middle of the uprights, nowhere near creating the dreaded doinks from the goal posts. The competition has been under the radar for the Colts considering all the other storylines this offseason. Still, it has been an intense one to fill the roster spot long held by one of the GOAT of Kickers: Adam Vinatieri. Hopefully, whoever fills those shoes can aid the Colts long term and come in clutch like Vinny used to.

The Blue Stable Player of the Game: Ben Banogu

While Paye brought the aforementioned highlight play sack, the biggest impact player was actually a different pass rusher who finished without a single sack. 2019 2nd Round pick Ben Banogu dominated the game with 5 pressures, 3 QB hits, 1 tackle for loss, and 2 tackles. He was absolutely harassing the Vikings OL and their QBs, even beating some double teams. Armed with elite level athleticism, we have known that the upside was there for Banogu. The problem was he was very raw and undeveloped from his time at TCU, and patience would be needed. However, after being a healthy scratch for most of 2020, Banogu has worked hard to prove doubters wrong. While the Colts banged up OL and the Panther and Vikings OL units are no elite units at this moment, Ben Banogu has done exactly what he should do against them: feast. It is unclear if he would be able to maintain similar production against better competition, but the development from the technical side of the game has been notable this year. I am looking forward to seeing how he will do come the regular season, as he has certainly moved out of the roster bubble and into the DE rotation. Should he continue this upward trajectory, he and Paye could form a highly athletic Edge rush duo for 2021 and beyond. Colts already have a stellar interior pass rush from DeForest Buckner, but if the young pass rushers on the edge develop, this front four could be what takes the Colts from a really good Defense to an elite unit.

While the Colts did win 12-10, the game was far from a satisfying victory on the offensive end. Drops, poor running games, and inconsistent QB play stifled the team in critical moments. Thankfully the Colts Defense was a shutdown unit. 2 sacks on the night; the aforementioned Paye play, and a shared one between AQM and Andrew Brown undersell just how much consistent pressure the Minnesota QBs faced. Whether it be them, Banogu, Turay, etc., the Colts were harassing the poor Vikings OL at the point of attack. Coverage was also rock solid throughout (especially by Rock Ya Sin early on), and the defense looked like an elite unit throughout the night. The Colts allowed a 50% completion percentage on the night, only 156 yards passing on 34 attempts and 71 yards rushing on 17 carries. It was a near perfect night for the Colts D, which was vital for the Colts victory. While the Colts do need to see more out of the young passers and reserve OTs for the Colts O to get humming, this defensive unit should be a force to be reckoned with this season.