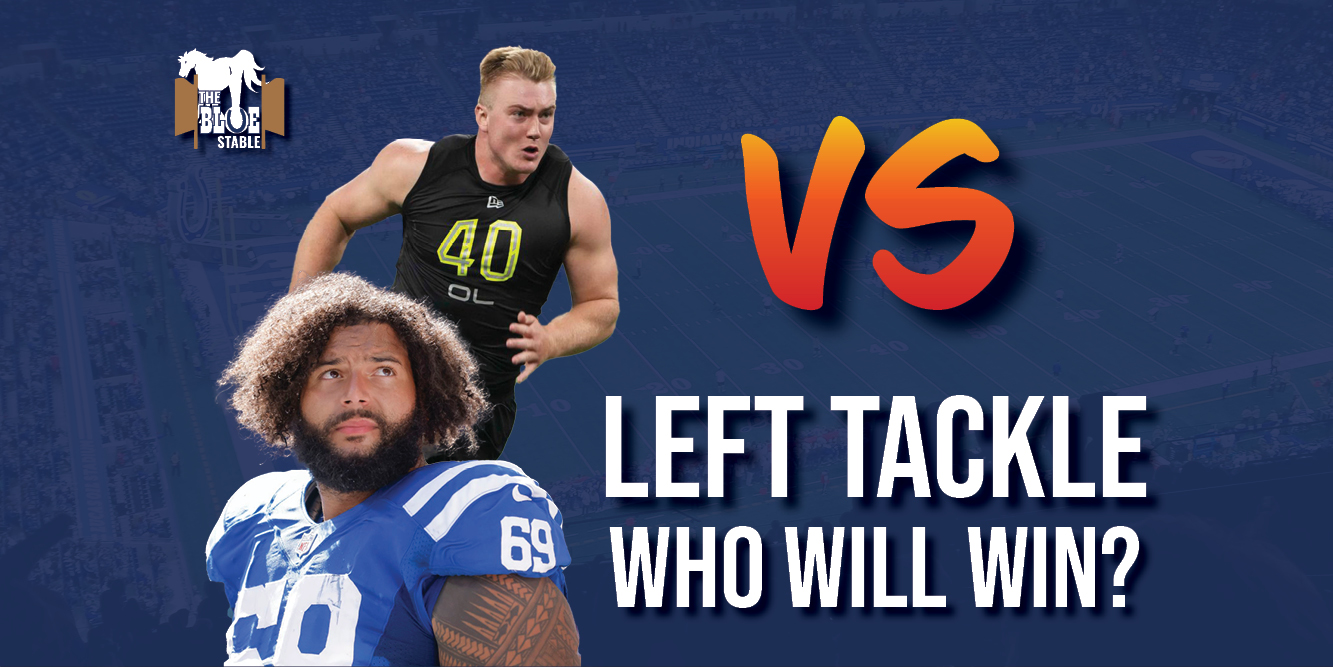 Who Will Win the Left Tackle Battle?

By SebastianBenchJuly 29, 2022One Comment
Embed from Getty Images
Many Colts fans have spent the last few weeks listening to the Luck podcast series from The Athletic’s Zak Keefer. Amongst other things, the series is a reminder of the Colts’ near criminal failure to protect Andrew Luck with even a passable offensive line. Anthony Castonzo was of course drafted the year before Luck, but there was precious little other quality until Ryan Kelly was taken in the first round of the 2016 draft.

It wasn’t until Chris Ballard became General Manager that Indianapolis started taking the offensive line seriously. Quenton Nelson has probably been the best offensive lineman in the NFL since entering the league, although the likes of Trent Williams have also been exceptional. Whilst Braden Smith has proven himself as a top Right Tackle, even if he took longer to develop and hasn’t reached the heights of Nelson.

Kelly, Nelson and Smith have ensured the offensive line as a staple of the Colts’ identity since Ballard became GM, as well as one of the best units in the league. They certainly helped Jonathan Taylor perform so brilliantly in his breakthrough sophomore campaign. Even though the o-line had a down year last season, Taylor still burned defenses across the league.

Embed from Getty Images
However this year, the offensive line faces the most uncertainty since Nelson and Smith arrived in 2018. There is a vacancy at Right Guard after both Mark Glowinski and Chris Reed were allowed to walk this offseason. Danny Pinter and Will Fries look like the two candidates most likely to fill the spot at this stage.

Even more interesting is who will assume starting Left Tackle, where the returning Matt Pryor and newly drafted Bernhard Raimann will battle it out. Whoever wins the will have to be considerably better than Sam Tevi, Julién Davenport and Eric Fisher, were last year in both preseason and regular season.

As we look towards the preseason games, who is most likely to be the starter when week one of the actual season arrives? 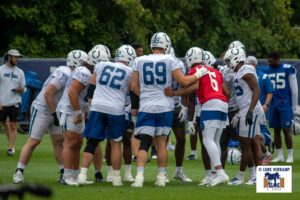 At Left Tackle, the position should be Pryor’s to lose. Ballard confirmed as much in March, but we should have known it anyway. Pryor ended up playing a significant amount of football last season, including starting five games. Due to his positional versatility, hs played snaps across the line. Pryor wasn’t outstanding, but still solid. That’s better than any of the other LTs the Colts have tried since Castonzo.

There should be a degree of concern whether Pryor can translate his good performances across the o-line into being a capable starter at any one position, especially one as vital as Left Tackle. On the other hand, playing and training full-time at one position and alongside other starters could help Pryor be better than he was last season.He also has the benefit of a full training camp this year and hopefully an absence of injuries to the likes of Nelson, Smith and Kelly.

I suspect that when Pryor signed his $5.5m contract this offseason, he was given assurances he was the presumptive starter. Although, the contract isn’t so expensive that Pryor would be bad value as a versatile backup offensive lineman if Raimann did win the starting job.

Ultimately, I expect Pryor to play well enough to justify his contract, without being so good he cements himself as the long-term starter or earns a much bigger payday down the line. But that solid level of play should be enough to make him the starting LT at least at the start of the season.

If Pryor is the presumptive starter, what does Raimann need to do to take the job from him and how realistic is it that he could achieve that level?

Embed from Getty Images
Raimann was a heralded prospect heading into the draft, with some expecting him to be taken off the board in the first round. His technical ability was praised, and he clearly has a lot of potential.

His major issue however, is his inexperience. The Austrian-born, Central Michigan graduate started only 18 games in college, allowing 1 sack and 16 pressures on 690 snaps. Raimann also earned a 94.6 run blocking grade in the process.

It’s never easy finding a long-term starter at Left Tackle, that comes with the territory at such a difficult and valuable position. It is even harder when the LT in question isn’t a first-round pick. That being said, some of the best LTs like David Bakhtiari and Terron Armstead were picked in later rounds. Thus, you definitely can’t count out Raimann just yet.

On the other hand, Raimann understandably isn’t as game ready as the three LTs taken early in the first round and will likely take considerable time and training before he reaches his potential.  There are no shortcuts to be taken when your job involves being asked to defend truly elite AFC edge rushers like TJ Watt and Myles Garrett.

Embed from Getty Images
On the plus side, Raimann will have some great teammates to learn from in Nelson, Smith and Kelly, in addition to some skilled coaches in Chris Strausser and Kevin Mawae. There are also encouraging signs the Austrian is a quick learner. He only began playing football (or American Football as us Europeans call it) at 14 and spent his first year in college playing Tight End. As a result, I will be expecting Frank Reich to scheme up a red zone play that sees Raimann catching a touchdown.

The fact that Raimann has reached such a high level with so little experience should give Colts fans great hope about his potential and future. However, fans should temper their expectations for the short term. The first year in the NFL can be a steep learning curve for players in positions that aren’t easy to master. It will be particularly tough for Raimann.

Embed from Getty Images
The ideal outcome for Indianapolis is Raimann becomes the long-term starter. He’ll be 25 in September so although he isn’t  a young prospect, he should still have many years ahead of him, especially given how long some LTs last in the league. Raimann should also have a higher ceiling than Pryor. If the Steinbrunn native does eventually become the starter, Pryor would still be an invaluable depth offensive lineman capable of playing across the line.

At least for the time being I expect Pryor to win the starting LT job. He’s shown he can play competently against NFL edge rushers and has developed some experience playing alongside the Colts’ other starters. In yet another offseason where the team’s offensive game plan is being altered to fit the arrival of another new starting Quarterback, it will also likely be an advantage for Pryor that he already knows the playbook.

If Pryor is indeed the starter, than Raimann will still be able to learn the professional game and should be a fine back up LT if Pryor gets hurt or has to shift across the offensive line to cover another injury.

Embed from Getty Images
In the long-term, I do think Raimann will win the starting job and I’m optimistic he can be a long-term replacement to Anthony Castonzo. There was a lot of justified optimism and excitement when Ballard drafted Raimann just a few months ago. That shouldn’t be forgotten if he isn’t the starter come Week 1. Raimann will still have a bright future ahead of him and chances to make the position his own.