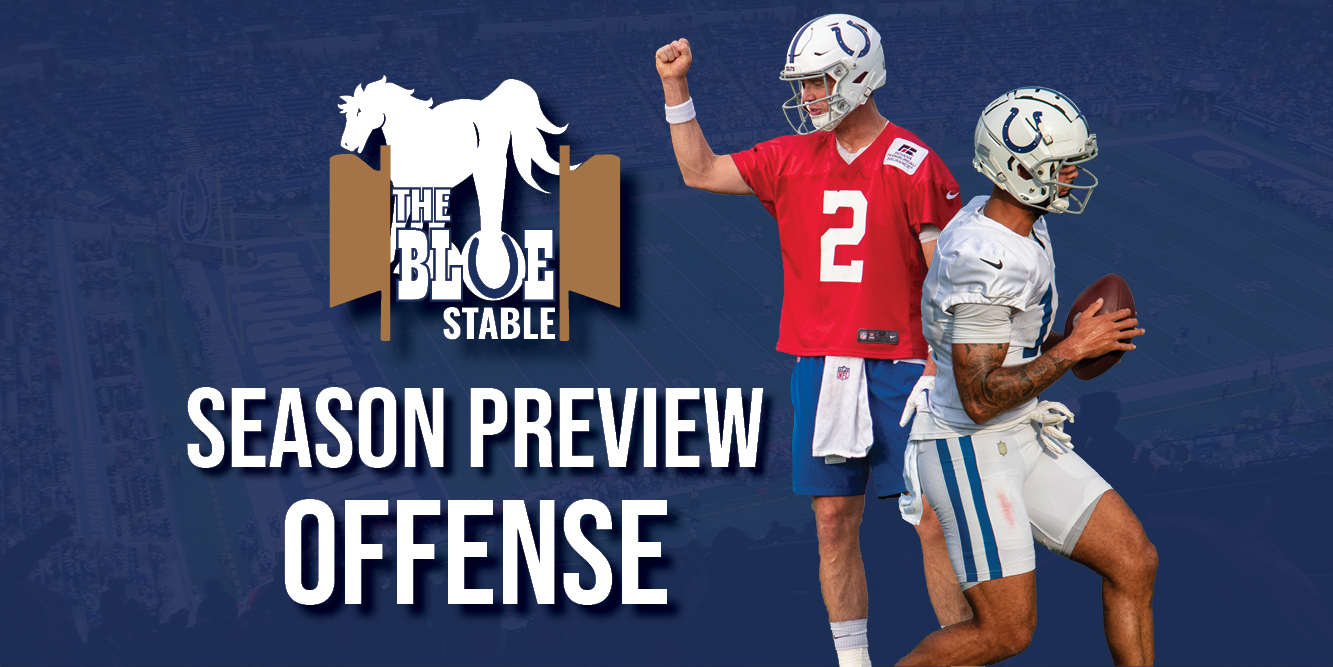 A few days into training camp, things are in a very good place for the Indianapolis Colts. This is important considering this time last year, the Colts had a quarterback who they weren’t sure was going to be available for week 1. Eventually, he played, and we all saw how that experiment turned out (and trust me, Colts fans, I’ll save you the pain of going down memory lane), but the Colts are now in a very different space as I’m here to explain.

First off: the QB position. The Colts were able to find a way to bring in Matt Ryan, a former MVP, former multiple-time Pro Bowler, and an accomplished veteran quarterback. Matt Ryan is completely different from the QB that was at the helm last year. Matt is mechanically sound, has awesome footwork, and a live arm that can make all the throws. The ironic thing is I don’t think any of those are his strongest attributes; Matt’s mind is his best weapon, and his ability to process and get the ball out quickly in a Frank Reich offense predicated on that will elevate the floor of this team.

Matt’s leadership ability has been on full display throughout training camp has been on full display with Frank essentially giving him the keys to practice. Matt has been pushing the tempo in an attempt to simulate almost real game speed, which I think will do wonders for the team’s mindset and conditioning. Matt wasn’t the only addition made during the off-season at QB.

The team last year had a very noticeable weakness at the backup quarterback spot (see the Rams game). The Colts decided to bring in former Super Bowl MVP Nick Foles to back up Matt Ryan. Foles will provide a steady hand and be a guy that Frank trusts to lead the guys if Matt goes down.

The running back position: well, what more is there to say when you have a guy that goes for over 2000 all-purpose yards and 20 touchdowns? It pretty much speaks for itself.

The Colts got a generational season out of a guy they hope can be a generational talent for at least a few more seasons. Taylor has it all as a running back: the speed, the vision, and the power, and he’s only entering his 3rd season.

Quite the opposite of Taylor, his running mate Nyheim Hines saw a down year as he was used mostly as a receiving threat. He saw a career low in targets and a career low in receptions, and it was definitely felt. When at his best, Hines is the 3rd best weapon on this offense and needs a bigger role.

Well, guess what? The Colts clearly heard us complain. Every time he has been given a chance to speak, Frank Reich has told us to buy Hines stock. We have seen him early in training camp line up in the backfield with and without Taylor while also lining up in the slot at receiver, which is both great signs for what’s to come. Hines will be a game changer this year, don’t believe me, just watch!

I’ll lead with this: I have been pro, they need to add a veteran to the WR room (and I still am), but I must admit watching early training camp practices does have me a bit intrigued.

WR1 is Michael Pittman Jr., a guy who took a massive leap from year 1 to 2 and is looking to take another leap from good to elite. Pittman has all the tools to be a traditional X receiver, but Frank uses him all over, which is better for schematic purposes and prevents teams from knowing where he is every snap making it easier to double him.

As great as Pittman is, there’s another guy who, talent-wise, may be just as good (if not better), and that’s Parris Campbell. Parris Campbell is looking like a legit stud, showing the explosiveness we’ve all known he had and also showing the ability to make contested catches in traffic. It was never a talent thing with Parris; The kid had star potential the second he walked through the door. It’s just always been unlucky, freakish injuries that have kept him from playing. Hopefully, with that behind him and how he’s performing now, he can cement down the number 2 receiver spot and show everybody why he was so highly touted coming out of college.

Behind Parris is Alec Pierce, the second-round draft pick out of Cincinnati. This is a guy I saw at the Senior Bowl and was really impressed by. Pierce is tall, able to separate in his route running, and can get up and get the ball. The Colts were in love with him, and in training camp, he has been proving them right in every way. I have seen him win reps against every cornerback on the roster.

Coming in at WR4 is special teams ace Ashton Dulin, a guy that proved last season he can be more than that in a small sample size. Dulin was used a lot last year in field stretching situations, and we saw him do just that a couple of times, making big plays in the offense. This season he’s looking to prove he’s more of an all-around receiver than anyone expected and is off to a great start in training camp, showing more polish as a route runner and making a couple of outstanding catches to show off his hands.

As for the tight end group, a lot of question marks still surround this position. It’s not a matter of who but a question of what they can accomplish together. Of course, the starter will be Mo-Alie Cox, a guy that played over 600 snaps last season and was really productive in small spurts. It’s always been weird that he didn’t get featured more, especially after he’s shown the ability to have big games.

Now that Jack Doyle has retired, another 600 plus snaps have vacated, and some combination of these next three men will have the opportunity to fill. First, Kylen Granson is on a bit of the smaller side compared to the rest of the room. He’s built entirely differently from the other guys, and I think that’s a distinct advantage for him. Kylen’s advantage is in his route running. He wins by gaining separation from defenders with his footwork and has some YAC ability. I like his ability to win against linebackers and safeties in the short to intermediate game.

Next is One of two rookies, Jelani Woods, the mountain of a man and an athletic freak. Already making plays in training camp, catching a beautiful ball down the seam from Foles is exactly the type of thing this team is looking for out of the tight end position. Jelani is a guy who will be bigger and faster than most of his matchups. His challenge will come in the form of learning the more nuanced things about the tight end position, which will determine how many snaps he receives this season.

Last but not least, a guy the Colts have been in love with for a couple of years, and that’s rookie Drew Ogletree, a big guy that is very raw from Youngstown state. He is a guy with a lot of upside as a blocker and receiver and a guy I fully expect to make the roster. The better question is whether he’ll be able to push for playing time, and I think with a solid camp, he can!

Once considered a strength for this team, the offensive line has a couple of question marks for the first time in a few years. The Colts will have two new starters on the offensive line this season, one at left tackle and one at right guard. No need to speak much about Quentin Nelson (who’s finally healthy), Ryan Kelly, and Braden Smith; those guys are solidified starters.

The real conversation is about who will win the job at left tackle. Matt Pryor is the guy that’s going to get the first crack at it. He earned it with his play last season, making starts at a couple of different spots along the offensive line and playing really well.

His competition is coming in the form of rookie 3rd round pick Bernhard Raimann who is very talented in his own right. The biggest knock on Raimann is the level of competition he’s played against in college. Going to Central Michigan didn’t allow him to test his ability against the elite competition. This is a very big training camp for him to prove he can handle the strength of NFL pass rushers because athletically, and his footwork it’s all there!

Moving on to the right guard spot, I almost feel like this is Danny Pinter’s spot to lose. The Colts absolutely love the former tackle from Ball State. I understand why some people may be afraid to trust a guy who’s never started a game at guard and didn’t even play the position before coming to the Colts. Still, after filling in for Ryan Kelly at center last season, this team believes Danny Pinter’s time is now, and we’ll see if they are indeed correct.

This Colts offense has its share of questions, but in my opinion, there are a lot of answers already on the roster. Reich managed to have top 10 offenses with less than I see on this roster, so there is no reason for me not to believe he can do it again. I think if the players you’re banking on (Ryan, Taylor/Hines, Pittman) are who they are supposed to be, and the offensive line holds up, this team can easily be in the top 10-12 range.

If you get major production out of the question marks on the roster (Parris, Pierce, MAC/Granson), then that would be enough to vault it inside of the top 10 easily. All in all, Colts fan, I couldn’t be more excited about this season and everything this offense can accomplish.

Stay tuned for a breakdown of the defense coming soon!