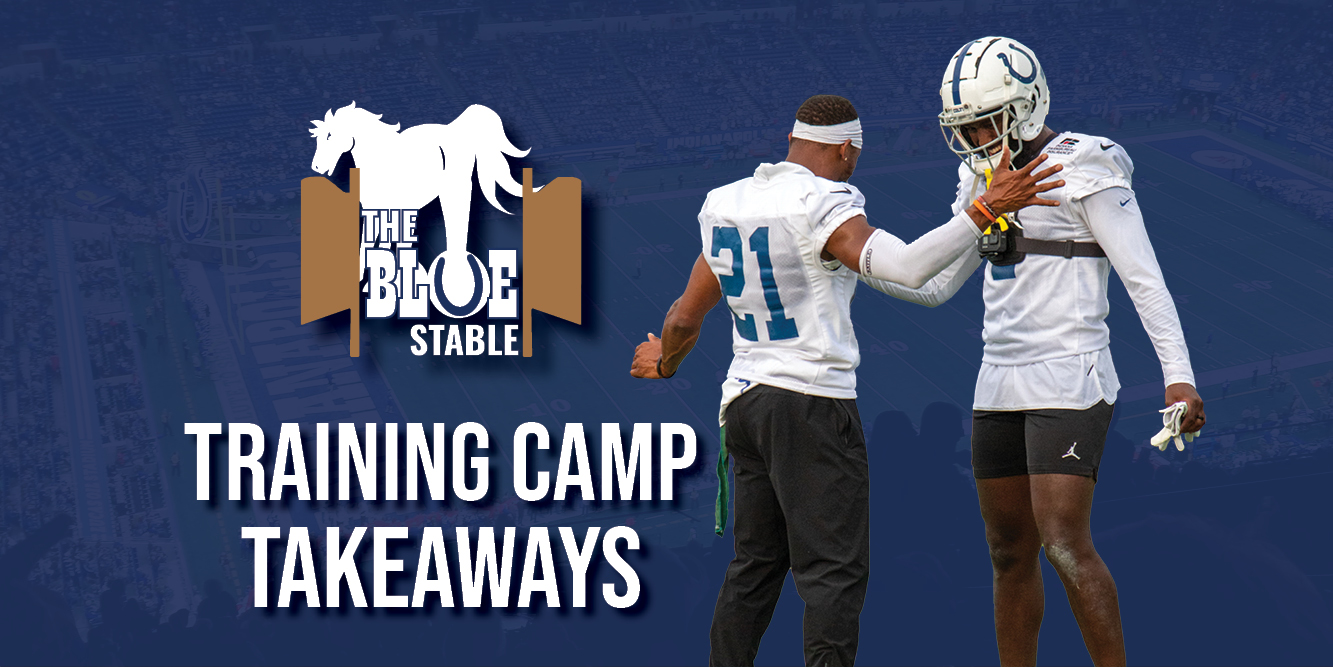 By Zach SchankermanAugust 1, 2022No Comments

Ok, it’s finally here, Colts fans. The 2022 season has officially started, with training camp kicking off this week. There are lots of questions as we head into this season. However, there is plenty of reason for excitement.

Our own Destin Adams and Luke Verkamp were at Training Camp on Saturday. I was there, and so was Johnny Ovalle, the latest addition to The Blue Stable. Although Destin and Luke were on the field, Johnny and I still had a good view from the stands!

Before I dive into the takeaways from Training Camp, make sure you follow me on Twitter @Zschankerman01 and @TheBlue_Stable wherever you get your social media!

Last week, in my article on predicting the 53-man roster, I discussed how I thought there was a need for additions to the WR room. From the outside looking in, the receiver room just looked questionable. I still have questions, but I have to give credit where credit is due.

“He’s light years (ahead) of me from when I was at this stage… he’s so smart… and a guy that young going up against Kenny (Moore) or Stephon (Gilmore)?… I think he’s doing great.” #ForTheShoe @CBS4Indy | @FOX59

First, let me start with some praise for Alec Pierce. I was highly impressed with what I saw from Pierce. For a bigger receiver, I expected him to look differently. I thought he moved like a smaller receiver in a big man’s body; he was super quick off the line and through his breaks. He was just fluid and looked natural; there is no other way to put it. I encourage every Colts fan to watch the clip below.

I liked what I saw from receivers Ashton Dulin and Parris Campbell. Parris Campbell has always flashed, but staying healthy has been a problem. However, if he is healthy, I think he could be primed to breakout this season. Campbell kept making plays and has formed a strong connection with new Colts QB Matt Ryan.

Dulin also impressed me. For a guy known for special teams, he just looked consistent as a receiver. I think Dulin can replace Zach Pascal this season based on what I’ve seen and his growth last season. After Saturday’s practice, he earned some praise from Head Coach Frank Reich.

.@Colts HC Frank Reich: “I cannot emphasize how strongly we feel about Ashton Dulin.” Says he envisions the WR making an impact on offense & special teams.

Overall, I’m cautiously optimistic about the WR group. If everything clicks, I think this group could be good enough. However, I think you still have to acknowledge the lack of experience and health concerns of the WR group.

What caught my eye Saturday was how the offensive staff was utilizing Hines. He got some work in with the running backs but also saw some time at WR. He made several plays on Saturday, including the one below. I like what he can be as a WR, and I think he could be used similarly to Cordarelle Patterson, who Ryan played with in Atlanta.

If Hines can continue to make plays from the WR spot, it will provide Coach Reich with more options with personnel packages and how he can scheme the offense. With the addition of Ryan, I think there is already a plethora of things Reich can do to make this offense look different from last season’s. Based on what I’ve seen, Hines will play a dynamic role in this offense.

Watching the offensive line go against the defensive line on Saturday made me realize something. You can only take so much away without players in pads. It’s prudent to see how guys move but to get the whole picture, physicality, and players in full gear are important.

I was impressed by Raimann; he moved extremely well for a guy his size. The defensive line showed flashes; I was impressed by Eric Johnson, Dayo Odeyingbo, Kwity Paye, and Ben Banogu, in particular. There seemed to be an emphasis on getting upfield, which is a welcome change.

However, it is just training camp. We all need to remember not to get too excited because ultimately, it matters what they do in game situations, not just practice.

While this is only practice, it was nice to see the young players flash. I am excited for next week because that’s when you’ll start to see pads and maybe even some contact.

For those who were in attendance, what did you take from Training Camp? Let me know on Twitter @Zschankerman01 and @TheBlue_Stable on Twitter, Facebook, or wherever you get your Colts news to join the discussion.