The Colts Aren’t Keeping Their First Round Pick

Home » The Colts Aren’t Keeping Their First Round Pick

As soon as Indianapolis agreed to a trade with Philadelphia for Carson Wentz that included a conditional first-round pick in 2022, theydestined to feature a lot of discussion about the lengths the Colts should go to try and keep that pick.

After week three, I could understand this discussion when the team was 0-3, and fans had to contemplate throwing away a top ten pick. But I was surprised to see it continue this week. I know they’ve only beaten the Dolphins and Texans so far, but they’ve pushed two excellent Rams and Ravens teams to their limits and have looked like a much better and healthier team.

The trade dictated that if Wentz played 75% of Colts offensive snaps (or 70% if Indianapolis makes the playoffs), the conditional second-round pick becomes a first-round pick.

Assuming for the sake of argument, every Colts game has the same number of snaps for the Colts offense. So to keep that first-round pick, the Colts would need to sit Wentz for 4.24 games if they don’t make the playoffs or 5.1 if they do.

The only way to keep the pick and make the playoffs would be to sit Wentz against the Jets, Jaguars (twice), and Texans and win all of those games with Hundley or Ehlinger under center. Even that scenario would require sitting Wentz for at least portions of other games.

There’s no way you can be confident at this stage that Hundley or Ehlinger could win all four of those games, and if they can’t, the entire strategy fails. So if you’re going to sit Wentz, you’ve got to commit to the tank and ensure the first-round pick you keep is a top ten one.

The Colts are far too good a team to attempt that strategy. Ballard, Irsay, and Reich would never pursue it, but if they did, I’d love to watch them try to sell it to Leonard and Nelson. As a fan, I waited far too long for this season to start to want the team to throw it away after only a few weeks. 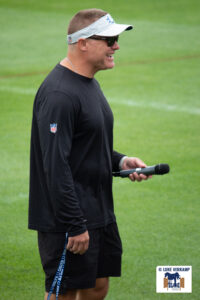 People need to realize that we’re not going to keep our first-round pick next year and accept that it’s ok. The Wentz trade was always likely to mean losing the pick. Chris Ballard sensibly negotiated it to a conditional second-round pick as insurance if Wentz suffered a bad injury or became unsalvageable after last season. But if things went well or simply as expected, the trade would always cost that first-round pick.

Not that a first and a third-round pick is an exceptionally high price for a potentially great franchise quarterback. The Colts gave up less to acquire Wentz than Chicago did to trade up to get Fields and much less than the 49ers spent to trade up for Trey Lance.

Of course, Wentz is also playing significantly better than Fields, Lance, or any of the NFL’s rookie quarterbacks because he’s got years of NFL experience under his belt. We know Wentz has a very high ceiling because of his 2017 season, and we know he’s more likely to reach his ceiling than rookie quarterbacks because we’ve seen him play at that level in the NFL. If (when) Indianapolis gives up their 2022 first-round pick because of the Wentz trade, it will still be a good deal for a franchise quarterback.

It is still early to judge Wentz in Indianapolis, but there are many encouraging signs. Sacks, defeats, and injuries characterized his first few weeks of competitive Colts football. Games that came after a severe foot injury during the offseason. Yet things have looked far more positive since the Tennessee game. Wentz was remarkably tough and durable to even play in that game. Yet as he’s got healthier in the weeks since, the Colts have started winning, and the entire team has looked much better.

The Dolphins and Texans aren’t the most feared teams this season, but the wins are still significant. Just look at how last year’s week one loss to the Jaguars cost the team to end the season. On the other hand, the way the Colts dominated the Texans was encouraging, as was the performance against the Ravens. So even if it was disappointing to lose like that in a close game, we should have won.

Wentz has been getting better as he’s got healthier and has been greatly helped by the performances of Reed and Pryor in the offensive line. Unsurprisingly, a better offensive line has made all the difference to Wentz’s performance, which is encouraging as the returns of Nelson and Smith may be imminent. 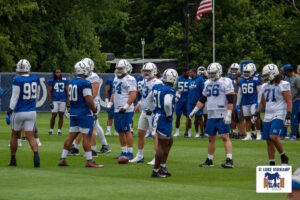 The hope for Wentz in Indianapolis was that his elite arm talent would allow Frank Reich to unleash a deep passing game. The fear was his turnovers would kill the team just as they did in Philadelphia last year. Colts fans must be pleased that Wentz has only thrown one interception this year (a shovel pass on the goal line that Aaron Donald blew up). While Wentz uncorked his deep pass against the Texans, finding Campbell, Hilton, and Allie-Cox to great effect.

The improved offensive line has also allowed Jonathan Taylor to remind the world of his explosive best. Given his brilliant performances over the past two weeks and the fact the Colts play the 49ers in primetime this Sunday, I hope Taylor will get the national recognition he deserves.

The resurgence of Wentz, Taylor, and the offensive line has rejuvenated the Colts offense. In addition, the defense has shown promising signs as Leonard gets healthier, although the lack of a pass rush and injuries to the secondary are concerning. All-in-all, The Colts are looking much more like the team we expected them to be this year.

Having faced some excellent teams while having a lot of significant injuries, the Colts have an opportunity to put a winning streak together and put themselves right in the hunt for the playoffs. The 49ers are a good team, but they haven’t been as impressive as I expected them to be. It looks like they’ll have Garoppolo back, although it’s not clear whether he’ll be fully fit. Meanwhile, it appears Kittle will still be missing, and Trent Williams’ injury is day-to-day. The 49ers are beatable for the Colts on Sunday.

A must-win game against the Titans follows. Tennessee has shown how good they can be against Buffalo on Monday and the Seahawks earlier in the season. But their crushing defeat to the Cardinals and lackluster loss to the Jets exposed their flaws. A Colts team with a healthy Wentz, Taylor, Hilton, and offensive line has every opportunity to expose the Titans’ poor defense. Again, it’s not a game I expect to be easy, but it’s another winnable game for Indianapolis.

That Tennessee game is followed by what should be two dominant wins against the Jaguars and the Jets. It’s entirely possible the Colts could be heading into their week 11 game against the Bills on a five-game winning streak and leading the AFC South.

Now, if they lose to the 49ers and the Titans to move to 2-6, then it might be worth contemplating sitting Wentz to keep that first-round pick. But you cannot sit Wentz while you still have a great chance of making the playoffs and having a successful season. So if the Colts keep playing Wentz, narrowly miss out on the playoffs, and lose a mid to late first-round pick, I can accept that. However, I can’t accept giving up getting to the playoffs, giving up winning the division, giving up on the season so quickly.

I accept that the Colts have a lot of needs they’ll want to address next offseason, with LT, CB, and WR surely at the top of the list. But a first-round pick is no guarantee these needs will be effectively addressed. Nor is the first round of the draft the only way to fill these needs, although I accept finding good left tackles through other methods is not an easy task.

I understand the fear the season is lost and the desire to focus on building for the future. I hope I’ve illustrated why all is not yet lost. But I also think playing Wentz is the best option for the future and the here and now. So one of the Colts priorities this season had to be finding out whether Wentz was the long-term solution at quarterback.

As I’ve said, the signs so far are promising; but the only way Ballard will know for sure is if Wentz plays. And the only way Wentz will once again become an elite quarterback is if he plays consistently. Only then will the good techniques he’s relearning become habits. Only then will he be able to build those vital connections with his receivers.

If Wentz can do this and build on his promising start in Indianapolis, then the team will have the opportunity to win big in the years to come. If they can do that, the draft capital they gave up to get him will look like a minimal price to pay.