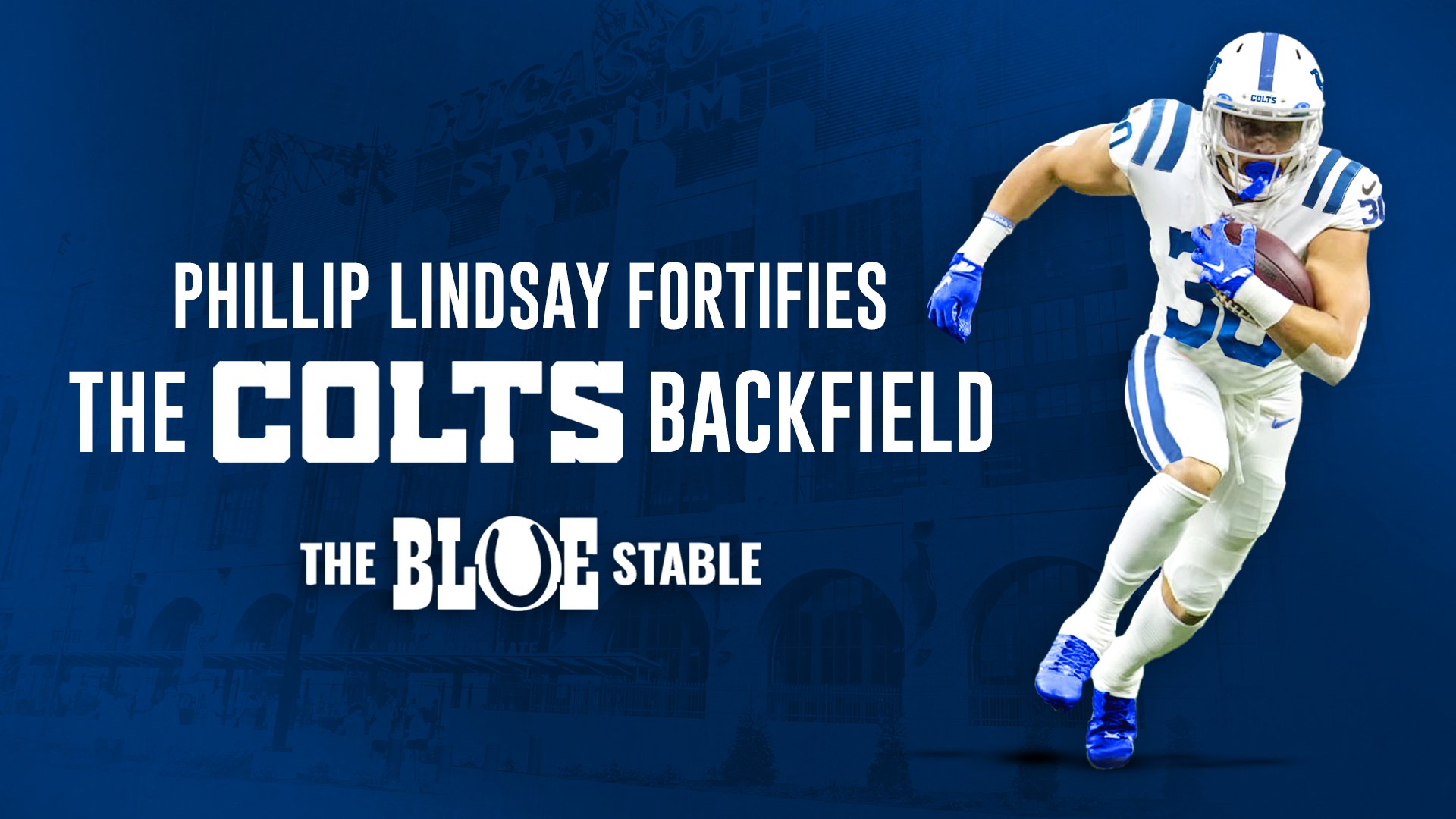 How Phillip Lindsay can impact the Colts’ historically top-heavy position and redeem himself through his new role.

After parting ways with Marlon Mack and Jordan Wilkins this offseason, the Colts needed an additional piece to stabilize the backfield. So who better than to add Phillip Lindsay, the only running back in NFL history with over 500 career rushing attempts and zero fumbles.

As of recently, Lindsay’s career has not been ideal. His once bright future as the Broncos franchise running back has since dwindled into the beginnings of a journeyman career.

His time with the Texans and Dolphins last season was riddled with unpredictable backfield rotations and similar-level competition. Even if he had opportunities as the starting running back, there was never enough consistency to establish a role for himself in either offense.

Now entering his fifth year in the NFL, Lindsay will have the rare chance to redeem himself in a mutually beneficial role as a dependable backup to Jonathan Taylor.

How Lindsay can make an impact:

As it currently stands, the top half of the Colts running back room consists of Taylor, RB1; Nyheim Hines, RB2; Lindsay, RB3; and Ty’Son Williams, RB4. Lindsay is listed as the smallest in the group, standing at 5-foot-8 and weighing 190lbs.

Pass catching is another feature in his repertoire; a good skill to have, but it will have to be kept in his back pocket because of Hines. The Colts will continue to prioritize Hines as their lead receiving back, possibly giving him an increase in volume. His contract and impact in the passing game are too much of a factor to grant Lindsay anything higher than the RB3 role.

However, the role isn’t as nearly-obsolete as some fans make it out to be. In fact, it’s the one role fans shouldn’t overlook on the Colts’ offense.

The way the Colts’ have operated their offense under Taylor could potentially make the RB3 more important than ever. Last season, the Colts’ run game -and the entire offense-depended on the production off of Taylor’s league-leading volume. Although statistically, it is a sustainable model to follow, it would be naive to think that continuing the strategy into next season wouldn’t cause issues to Taylor’s health.

In the event that Taylor suffers an injury or feels ghastly after a long run, the RB3 was the next man up. For the last two seasons, this role had belonged to Wilkins. Now, it belongs to Lindsay.

Wilkins was paired with Mack as a joint backup to Taylor for several years. He has a powerful, fight-for-your-life running style like Taylor, but lacks the ability to do it at high volumes. Throughout his whole career, Wilkins never averaged over 6 carries a game in a season. Lindsay, on the other hand, has never averaged below 6 carries a game in a season.

He adds a level of experience to the Colts’ depth chart that was not present in previous backfields. His exposure to RB1 volume allows the Colts to expand their time cushion for however long Taylor decides to stay off the field. Not only does his dependability lessen the urgency of Taylor’s return, but his experience can also be characterized by his vision and efficiency; two qualities that reflect Taylor’s strengths.

I’m continuing my impressed with #Colts RB Phillip Lindsay. He’s shifty, hits holes hard and keeps managing to get positive yards – today in practice and during Saturday’s preseason game. He’s one to keep an eye on.

The 2018 and 2019 seasons are Lindsay’s best examples of displaying his efficiency in the event he enters an RB1 role. During this time, he led the Broncos in rushing yards, and attempts, and averaged an EPA of 0.011 per touch. In comparison, Mack’s EPA per touch was a third of that as the Colts’ starter (0.0035).

A constant degree of efficiency from the backfield is crucial in maintaining an offensive rhythm. And if Lindsay can get comfortable in his established role behind Taylor, the Colts will see success in shortening the talent gap between the RB1 and backup positions.

How Lindsay can complete his redemption arc:

When Lindsay entered the NFL as an undrafted free agent, the Broncos took a chance on the in-state back. In turn, the Broncos were reaping Pro Bowl-level production every Sunday.

After his prolific rookie season, his career in Denver took several twists and turns. Injuries and competition continued to pile up as his season averages slowly decreased.

Lindsay left the Broncos in 2021 and opted to sign with the Texans on a 1-year deal. He was waived just eight months after and was claimed up by the Dolphins days later.

Last year, the Dolphins were an inexperienced team trying to find their footing in the competitive AFC. The race for the final wild-card spot was tight, and the team’s unexpected winning streak put them back into the playoff conversation.

There was no time for the Dolphins to install Lindsay into their offense properly. He was a mid-season newcomer who never had a fair opportunity to find his own footing within the midst of the team’s growing-pain-fueled chaos. He was able to tag on an extra 119 rushing yards to his stats before ending a rather unmemorable season.

When the Colts signed Lindsay this offseason, many fans probably recognized the familiar name, went “oh, that’s cool,” and went on with their day. I only say that as an assumption based on my initial reaction.

A grand reaction may not have been warranted at the time, but the more you delve into his career, the more you start to believe in him and the revival of an underdog story.

Year after year, Lindsay has witnessed his team wean him from key situations, volume, and eventually, the team.

He enters a well-structured running back system with a predetermined role by signing with the Colts. It is the exact security he needs to put an end to his career’s depressing trajectory. The dependability he brings as a backup to Taylor is also the exact security the Colts need to maintain an effective rushing attack.

Lindsay is ready to attack his personal vendettas this season from a fixed role, clear of erratic changes. It’ll be new territory in an unfamiliar role, but the regained sense of direction gives me faith in his ability to redeem himself.

Let me rephrase that, he will redeem himself this season. I know he will because something tells me that he won’t be fumbling away any of his chances.