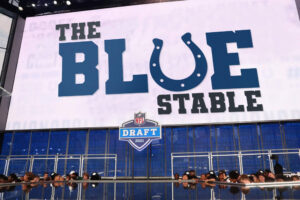 We made it, Colts Nation! Welcome to Draft Week! The draft begins on Thursday. I don’t know about you, but I’m excited. I love watching the draft. It’s one of my favorite parts of the off-season. But, of course, it helps when you have a hell of a drafter like Chris Ballard. This will be my final mock draft of the year. I was happy with the one I previously completed, but I could tell waiting on a receiver bothered the fans. In this article, I’ve completed three mocks from three different websites. I used TheDraftNetwork, PFF Mock Draft Simulator, and ProFootballNetwork to complete these mock drafts. All but TDN will include trades.

George Pickens should be a first-rounder, in my opinion. I believe he has the talent to do so, and if it was for the injury, I feel an argument could be made about him being one of the first receivers off the board.
If McBride falls to the third round, my head will explode. I think he’s been the clear TE 1 throughout the draft process. While I feel his ceiling isn’t as high as others in this class, I believe he has a high floor.

Myjai Sanders in round 4 would be a steal in my eyes. Sanders is an electric pass rusher who is an explosive pass rush. I understand pass rush isn’t the biggest need, but if a player like Sanders is sitting around, you have to take him.

While I have him ranked a bit higher than most people, Justyn Ross wouldn’t shock me if he’s available here. Ross, in my opinion, is another guy whose stock is falling because of injuries. I believe Ross could mesh well with Matt Ryan.

In round 5, I also went Barno, and if you’ve been following along on my potential targets for the Colts, you know I’m a Barno fan. My head would explode if the Colts could add Barno and Sanders in the same draft class. That would be a filthy duo.

In round 6, I wanted to target an offensive lineman with potential. Stuber is a mountain of a man. He looks good in pass protection and looks rough in run blocking. But, if Chris Ballard saw talent in Sam Tevi, Stuber has a shot.

And to close out this mock, I had the Colts going, Alec Lindstrom, who, in my opinion, should be drafted earlier. I’m unsure why he fell in this mock draft, but I took him because he’s the best player available.

Well, I gave my explanation on this mock draft. How do you think I did? Is there anything you would change? On a scale of A-F, what would you grade this mock draft?

For one getting an extra pick in next year’s draft excites me. Adding another third-rounder also excites me. This class is deep, and getting more picks should be a priority. #TeamTradeBack.

With the first pick, I have the Colts selecting Christian Watson. Watson is an exciting prospect. While I’m not the biggest fan of Watson, I could easily see why the Colts would be interested in him. Watson, the size and traits you want to see from a receiver on the outside.

In round 3, I went with Greg Dulcich from UCLA. I think it’s clear the Colts need a TE after the Doyle (DOYLE RULES) retirement. Dulcich is a different player than Doyle and would bring a different dynamic to the position.

With the extra third-round pick I traded for, I selected Cole Strange. Cole is a small school prospect who performed well at the combine and Senior Bowl and is gaining attention from scouts around the league. Every year we have a small school darling, and this year it’s Strange. Strange has the traits Chris Ballard looks for in a prospect.

In round 4, I went with Ross from Clemson. I believe if Ross can stay healthy, he could be a real weapon for the Indianapolis Colts. I’ve already talked about Ross, so please see above if you’d like a better explanation.

In round 5, like in the previous mock, I wanted an offensive lineman. Waletzko is another tackle in this class with a ton of potential and good size. I feel Ballard could take a flier on a guy like Waletzko.

In round 6, this one probably was the shocking pick. This feels like a Chris Ballard guy. A season-ending leg injury ended his final year at UT early. He’s got special teams reps which is valuable in making a roster. He was a Senior Bowl invite which has seemed impressive to Ballard.

And to close out this mock draft, I had the Colts select Dare Rosenthal. Rosenthal has good size, good athleticism, and plays violently.

Again PFF gave me a B+; what would you grade this draft class?

Fair warning, I did go a little trade happy with this one, but the result was probably my favorite of the mocks I did. I’ll announce all the trades before I list the mock draft.

If anything close to this happened on draft day, I would never say a bad thing about Chris Ballard. Trey McBride is one of the highest-ranked tight ends in this entire class. McBride’s stats speak for themselves. He’s an incredible prospect, and the Indianapolis Colts need a TE following the retirement of Doyle.

I followed McBride by selecting David Bell. Bell makes too much sense to be an Indianapolis Colts. Bell wants to be a Colt, and Colts fans want him to be a Colt. Chris Ballard, let’s make it happen. Let’s keep Bell home.

I followed Bell by selecting Nicholas Petit-Frere from THE Ohio St University. NPF, in my opinion, has position versatility. I see him inside at guard, but many people view him as a tackle. I believe he would be a valuable asset to the Colts along the offensive line.

I decided to select James Cook from Georgia, which makes absolutely no sense because we have Jonathan Taylor. I believe we had the extra capital, and at that point, you have to take the best player available. Running back isn’t a need, but adding another back could relieve Taylor from taking unnecessary hits.

I followed Cook with Dare Rosenthal. It may be a little early for him here in round 5, but you can afford to take a guy to develop when you have extra picks.

I followed Rosenthal with another WR in, Kyle Philips from UCLA. Philips is a true slot receiver who’s been a reliable target at UCLA. He’s looked great in the slot, and the Colts have lacked a true slot weapon for some time now.

I followed Philips by drafting a pair of EDGE Rushers in the 5th round in Malone and Barno. I believe both players have traits that would stand out to Ballard. I’ve already talked about Barno previously, but Malone is a physical edge rusher who isn’t afraid to do the dirty work and ware out an opponent.

I followed Malone with another tackle. Cordell Volson has the ideal size you want from a tackle and has guard versatility.

And the final pick in this mock draft I selected Malcolm Rodriguez. A linebacker from Oklahoma St who was the captain of the defense. It’s no secret Chris Ballard values team captains. Rodriguez is a physical and fast linebacker. He’s also forced 13 fumbles. I’m sure Darius Leonard loves that.

And finally, Rodriguez has special teams ability, which gives him an advantage to impact the roster.

That’s three different mock drafts. Which was your favorite? What would draft would you prefer? Do you feel the Colts would be better if any of these happened? What would you grade each mock draft?