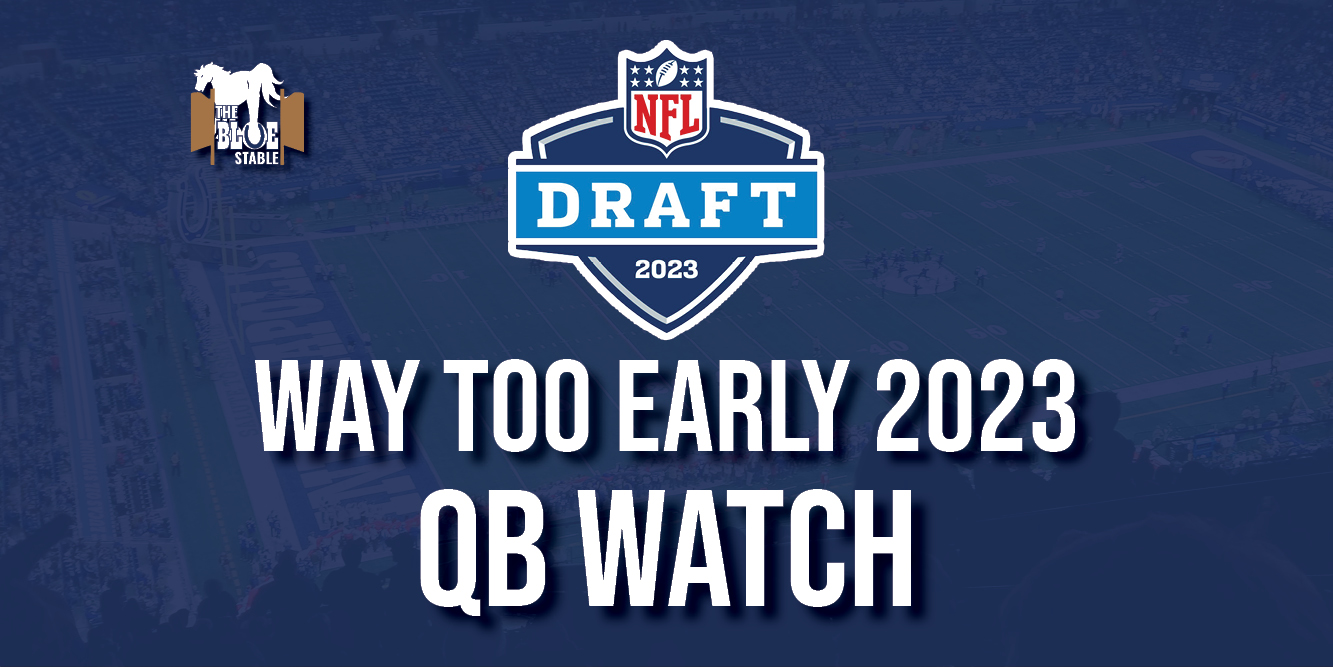 Since Andrew Luck’s retirement shortly before the start of the 2019 NFL season, the Colts have had a carousel of starting quarterbacks at the helm. The team has cycled through four quarterbacks before trading for Matt Ryan following the 2021 season.  Those QBs were Jacoby Brissett, Brian Hoyer, Phillip Rivers, and Carson Wentz.

It is safe to say that consistent quarterback play has alluded to the Colts’ lack of ability to perform versus the stronger teams in the NFL, let alone affect the team’s chances of making the playoffs year in and year out. The Colts’ record following Luck’s retirement after the 2018 season is 27 wins and 22 losses.  With a winning percentage just scraping north of .500 (.551 to be exact), it is easy to see why they have not even come close to enjoying the success that was achieved while Luck was under center.

While the Colts ranked 9th in team offense in both seasons since drafting Jonathan Taylor, the lack of stability and comfort at the quarterback position has wrecked any chance of making any noise in the playoffs.  The last two seasons have shown great improvements on both offense and defense, but trading for Matt Ryan is not a long-term fix. The Colts’ passing offense has ranked 30th in 2019, 11th in 2020, and 26th in 2021, and Matt Ryan is here to steer the ship while he still has some gas left in the tank.

The perceived upgrade in Ryan helps add to a top 11 ranked rushing offense or better following the 2018 season (7th in 2019, 11th in 2020, and 2nd in 2021). He still has two years left on his current contract, and the Colts hope he plays it out with flying colors. The team’s goal is for Matt Ryan to help this team reclaim “the gleam” that has been out of reach for far too long.

Chris Ballard has planned to build the Colts into a powerhouse, by drafting the players that fit his “mold” and put them into an environment where they can play at their best. His continued success in acquiring future hall of fame talent and stressing the importance of depth, has helped Indianapolis begin to start putting fear into other teams’ minds.

Many Colts fans believed that Ballard could draft the new “heir apparent” during the 2022 NFL Draft. Hype trains were building around prospects like Desmond Ridder, Sam Howell, and Matt Corral alike. By the end of the draft however, the Colts left without a long-term replacement at quarterback.

During the draft, the Colts’ focused on addressing more pressing and immediate positional needs like; offensive tackle, tight end, and wide receiver. With new players Bernhard Raimann, Jelani Woods, and Alec Pierce joining a young, athletic, and improving roster, the only position needing a revamp is obvious.

With the Colts possessing their 1st round pick in the 2023 NFL Draft, there are for now, two quarterbacks that I believe are on their radar for this 2023 draft. It is not surprising to think why they would want to wait until this draft class, to select a new franchise quarterback. The 2023 NFL draft class is loaded with talent at the quarterback position like CJ Stroud, Bryce Young, and Will Levis.

The three QBs mentioned could easily go within the top 10 in next year’s draft, so please do not tweet out #SuckForStroud. Barring any unforeseen circumstances, the Colts will have a small chance at drafting any of the three (Will Levis is the best possibility). With Stroud and Young commanding the national spotlight, putting up video game-like numbers during games, and competing for the Heisman Trophy; It is easy to see why they are poised to be the #1 and #2 QBs off the board during the 2023 NFL Draft.

Will Levis is one of the quarterbacks to keep an eye on throughout this collegiate season. As he enters his 2nd full season as a starter for the University of Kentucky, he has helped pump life into a football program that has been in the lowly depths of the SEC football conference in recent years. The 6’3″ Levis weighs 222 pounds and possesses a great body frame/build for an NFL QB at the next level.

In his only season at Kentucky, Levis threw for 2,826 passing yards with 24 passing TDs and 13 INTs with a passer rating of 148.3 and added an extra 376 rushing yards and nine rushing TDs. Levis’ completion percentage was 66 percent on the season, good for 22nd best in college football in 2021. Levis did not light up the stat sheet like his potential draftee counterparts, but his 33 TDs and over 3,000 all-purpose yards helped Kentucky reach its sixth straight bowl game and fourth consecutive bowl game win. Kentucky’s 10-3 record in 2021, was the school’s best record since 2018 (also 10-3), and before 2018, Kentucky had not won 10 games since 1977.

Levis will continue to put his best foot forward and help lead this  improving Kentucky squad into the strongest collegiate football conference in recent memory. It is within the Colts’ best interest to keep tabs on a player like Levis because potential NFL franchise QBs do not grow on trees. The draft stock/grade on Levis should not waver very much throughout this upcoming season. Depending on how well Levis performs this season, it will ultimately cause his draft stock to fluctuate (in the Colts’ favor or not in their favor).

In the case that Will Levis is not available to be drafted by the Colts in 2023. However, there is another QB to watch out for in this upcoming draft class: Tanner McKee.

Embed from Getty Images
Tanner McKee is a 6’6″ 228-pound junior quarterback from the University of Stanford. McKee became a full-time starter for the Cardinal after the head coach decided to put his trust in McKee over presumed starter Jack West. It was not a surprise move as McKee was a four-star QB recruit out of Corona Centennial High School.

Before signing with any collegiate team, McKee made it clear that he would first go on a two-year religious mission before officially beginning his college football tenure. As McKee was a devoted Morman, it is required in their religion to go on a missionary retreat for two years.

The retreat and waiting period for McKee to come and play for Stanford was well worth it. Once his mission was complete in 2020, he was able to join the Cardinal for the first time. While he only played in one game in 2020, he was still able to use the season to help take his game to the next level. Coming into 2021, there was not much buzz surrounding McKee and it did not improve, as, despite the heroics of his play, Stanford would finish 3-9 in 2021.

McKee’s stat line is as follows:

McKee’s stats are worse compared to Levis’ in every category, except interceptions, as Levis starred in three more games than McKee during the 2021 college season. Both QBs have similar statures and athletic builds that fit the prototypical quarterback that the Colts are looking for. McKee has the physical advantage, as he is a whole three inches taller than Levis. Levis on the other hand has the upper hand on experience as he was also a backup QB at Penn State for two seasons before transferring to Kentucky.

In all reality, it is truly a toss-up on which QB prospect to choose because of the number of similarities that both possess amongst each other. Both McKee and Levis are seen as first-round talents and future franchise QBs, but they are a level below Stroud and Young in terms of popularity and potential.

This upcoming college football season will be filled with plenty of future stories on Levis and McKee, and don’t be surprised when the two begin to take the spotlight away from Young and Stroud. Colts fans everywhere should be optimistic when thinking about the future possibilities at QB, especially in this upcoming draft class. Who do you think the Colts draft at QB in 2023?