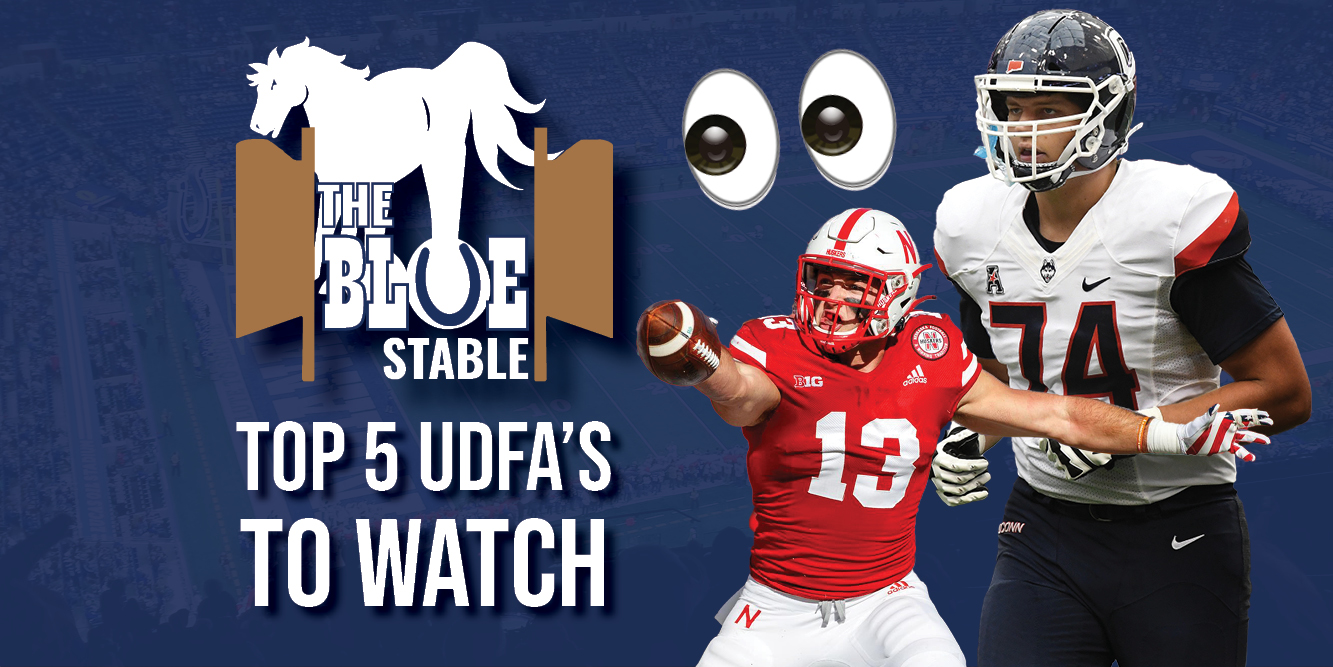 By Zach SchankermanJuly 14, 2022No Comments

Well, it has been a minute since I have written an article, and it feels good to write again. If you follow me on Twitter, you know I dealt with COVID and how this part of the off-season is slow. Thankfully, training camp begins soon, which means we are nearing football season!

Let me know on Twitter @Zschankerman01 or @TheBlue_Stable who you think my group of 5 undrafted free agents will consist of before reading the article.

Disclaimer: The 5 players I list are in no particular order in terms of likeliness to make the roster or practice squad.

Pitt State's Dallis Flowers strapping the helmet on for the first time with the Colts.

I think Flowers is a lock to at least make the practice squad, and I wouldn’t be surprised if he made the roster as well. He has elite physical traits, and many draft analysts had a draftable grade on him.

In addition to his high athleticism, he was a great return man at Pittsburg State, which I think could contribute well on special teams for the Colts. If he returns kicks or punts in the pre-season, you might want to throw a bet on him returning it for a touchdown.

Dallis Flowers really stood out to me, in day 1 of #ShrineBowl practices, here are most of his reps for the day threaded together pic.twitter.com/Ut0FDQ6Atx

A player he reminds me of a lot is former Colt, Pierre Desir. Desir was also a small-school player with similar athletic traits and style of play. Speaking of the Colts’ secondary, I think the presence of John Fox and Ron Milus will be immensely helpful for his development early. Look for Dallis Flowers to turn heads in camp and in pre-season because I think his best football is ahead of him.

Considering what the Colts lost at Guard in Mark Glowinski and Chris Reed, I am shocked that the Right Guard position isn’t mentioned more often by the media and fans. Matt Pryor could slide is as the starter, but he’s widely expected to compete for the starting left tackle job.

Danny Pinter could start at right guard too, but the Colts reportedly like him a lot at center. I believe that because of Ryan Kelly’s regression last season and overall injury concerns, Kelly’s job may not be as safe as people think. The injury concerns make me wonder if they start Pinter at right guard because he’s Kelly’s backup right now.

Then there is Will Fries, who the Colts drafted last year in the 7th round, appearing in 2 games. According to Destin Adams, the Colts like him a lot, but he doesn’t have much experience.

Why I’m bullish on Seltzner:

This is where Josh Seltzner comes into play. Seltzner was a multi-year player at Wisconsin, a university who’s football program is famous for sending great offensive linemen to the NFL. He also has great physical traits, as you can see above.

Regarding his RAS score, he played closer to 329 at Wisconsin and lost a lot of weight. I think he could put on 10-15 pounds and maintain his athleticism. Mike Rittelman, Director of Scouting and Player Personnel, College Gridiron Showcase, said this about Seltzner’s performance at the event: “Seltzner had a great showing at the 2022 College Gridiron Showcase.”

Off topic, but I love the feet on Josh Seltzner. He makes this look way too easy. Have him higher than some other prospects just because of this. pic.twitter.com/tbe2RbwLqm

From what I could tell on film, Seltzner is a player who moves well in space, is a great pass blocker, and plays with good physicality. The clip above displays how well he moves his feet which is essential for linemen. Even more essential is his ability to play at left guard too. With depth concerns and Seltzner’s skill set, I think he makes a lot of sense to make the 53-man roster.

Fun Fact: Seltzner was a walk-on at Wisconsin. He was in the same recruiting class at Wisconsin as Colts players Jonathan Taylor and fellow undrafted free agent Jack Coan.

An Indiana native, Weatherford is an intriguing young player for the Colts. He is not your typical undrafted free agent; I think he can contribute on day 1. Before the draft, I thought that he was a 4th or 5th-round pick.

Weatherford is an extremely intelligent player and really solid in pass coverage while boasting great physical traits. Many have compared his style of play to Divine Deablo, who played for Colts DC Gus Bradley in Las Vegas. I think he could get some playing time early because of what he brings to the table. Also similar to Deablo, he tends to match up quite well with Tight Ends.

This is why I like Sterling Weatherford at safety. Watch him come up and man match the TE, keep outstanding in coverage and play the ball. Had an INT in his hands. pic.twitter.com/doDugtx7yf

Bobby Okereke and E.J. Speed both have one year left on their deals, and newly acquired LB Brandon King only signed for one year. I think this gives Weatherford plenty of opportunity to either make the Practice Squad or the 53-man roster. Okereke is undoubtedly the starting MIKE linebacker, but Speed and King could be cut if Weatherford continues to impress.

With Training camp quickly approaching…of all the guys on the bubble and UDFA’s, who do you guys think have the best chance to make the #Colts final 53-Man roster?

I’ll go first, from what I’ve heard how the colts really love what they saw in the spring… LB JoJo Domann

Domann is an intriguing prospect because he played a variety of positions at Nebraska. He played nickel corner, linebacker, and even some safety at Nebraska.

What concerns me with Domann is that he looks too small to be a linebacker and maybe not fast enough to be a safety. Furthermore, he’s 25 years old and dealt with 2 ACL injuries in college. The tape shows a draftable player, but the traits and medical background explain why he wasn’t selected.

Domann is a strong tackler, good in zone coverage, a high-character guy who was a team captain, and is fast enough to cover tight ends and running backs. I think he can be a sub-package player in the NFL who contributes on Special Teams.

I like what he can be but not as much as I like what Sterling Weatherford can be. If he continues to make plays in training camp, perhaps he and Weatherford can convince Chris Ballard to cut both Speed and King. I think he ends up on the practice squad but has an outside chance to make the roster.

Congrats to @Ryan_Van_Demark for signing a UDFA deal with the @colts

Van Demark received an extremely high signing bonus for an undrafted free agent, which is why he made my list. The Colts wanted him and were willing to pay whatever it took to land him.

Before the signings of Dennis Kelly and Jason Spriggs, I was pretty optimistic about Van Demark’s chances of making the 53-man roster. Now, I see him as a guy who competes with Brandon Kemp for a spot on the practice squad. However, that doesn’t mean I don’t like Van Demark’s upside. I think he has a chance to be a really solid depth player in the NFL.

Van Demark has elite physical traits, as you can see above, and is a violent player who moves well in space. He fits the mold of what the Colts like in their offensive linemen to a t.

I see his first year in the league being a practice squad year where he refines his technique. Clips like the one below are what excites me about him the most.

Catches w/ left to plate, has right on shoulder, moves feet and not lunging. Removes left after pocket. Alters w/ right, gets left back. No holding. Don't get 15 there. Nice. pic.twitter.com/QPjTKkKVMH

Year 2 is where I see an opportunity for Van Demark. I think he can become a swing tackle and be the primary backup for Bernhard Raimann and Braden Smith.

I think these 5 aforementioned players have a fantastic chance of either making the roster or the practice squad. With all the talent they bring, Chris Ballard was able to sign a great undrafted free agent class.

A culmination of great work by Ballard and the entire front office puts this team in a great position. These players are culture setters and guys that help you win championships, and it could show in a January down the road.