Trading back from 42 will result in some Colts fans yelling some choice words at their screens on draft day, but bear with me here. If the player(s) the team wanted at 42 doesn’t quite make it there, why not gather more picks on day 2 and early day 3. In this situation, the team finds a trade partner in the Chiefs, who currently own 12 picks in this year’s draft. Being one of the favorites in the AFC as well as the league, the Chiefs simply don’t need 12 drafted rookies on their roster, so a couple of trade-ups make a lot of sense for KC.

Embed from Getty Images
Pierce is someone who has gathered a ton of steam throughout the draft cycle. A player who many believed would hear his name early on day 3 has boosted his stock up to the point that I would be shocked if he made it out of round 2. Pierce may be the perfect Z WR in this year’s class to complement Michael Pittman Jr. He Has a great combo of size and speed, being 6’3 and running a 4.41. In addition, Pierce’s tape shows how shifty he is and flat-out embarrasses defenders at times with his crisp cuts. He also would give the Colts a great balance of a high floor and high ceiling prospect all wrapped up in one player.

McBride graded out as my personal TE 1. I view him as the highest ceiling TE prospect in the class and see him as the perfect TE for Reich’s offense. McBride displayed his athleticism on tape but put people on notice with his draft cycle work. McBride didn’t run at the combine but ran 4.56 at his pro day. That would have been good enough to be the 2nd fasted time at the combine. McBride reminds me a lot of a TE you may or may not know of George Kittle when he was a prospect, and if he can even become half the TE Kittle is, the Colts would be very happy with the selection. Don’t take my word for it, though; check out this comparison done by ras.football. 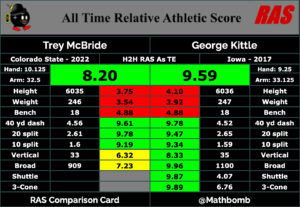 Evans has been a CB, I claim, on the “My Guys” list this cycle. Evans has the size you want to see for an outside CB being 6’2. I really like his footwork in coverage and ability to make up ground when needed with that 4.46 speed. He’s not hearing his name earlier has a lot to do with his lack of ball skills. He only produced one interception throughout his college career. I believe the right DB coach will be able to help Evans develop that needed skill while also using his already in place strengths to get Evans on the field as a solid depth outside corner, at the very least.

Rosenthal started his college career at LSU before transferring to Kentucky. Rosenthal has a ton of potential to be a very good LT in this league for a long time. The problem is he just isn’t there yet. The Colts have Matt Pryor in place this year to start while they can try and mold Rosenthal into a starting level tackle at the next level. Being 6’6, he has the height needed for the spot and comes in on the leaner side for a tackle weighing in at 290, which helped him run a 4.88 40 at the combine. His get-off at the line isn’t the problem for him. It’s most of the technical aspects of the game. The two that really need work are his hip work and his center mass, as he was pushed around at times. Another situation to monitor is he’s found himself in some off-the-field trouble violating multiple team rules during his time at LSU before transferring.

Shakir is a WR who has been flying under the radar for some in a very stacked WR class. Shakir was a captain at Boise State and someone that anyone who has coached and/or played with has glowing reviews to give. He is a very shifty athlete who puts defenders on skates with his 4.43 speed and crisp routes. His short and medium route running ability is better than his deep route tree. Shakir is a high IQ WR who has the athleticism to use it to its full potential. Unfortunately, he measures out a bit smaller than most would like, at just under 6’0. His ideal best role would be more so in the “Y” or slot role opposed to the “Z” WR some view him as.

Munford spent most of his collegiate career at LT before making the change to G in 2021. This was a good move for him because I believe the team that drafted him would have wanted to have him make the change at the next level either way. Munford is a very long G who has the strength to excel as a run blocker on day 1. His game needs work in pass protection; he will need just about every aspect under the hips coached up. Improving his footwork could take him from a depth G to a starter in this league.

Gemmel was a two-time captain at North Carolina, and his play on the field showed it. Some who watch him operate and play say he’s like having a coach on the field with you. Add his high energy and effort play style to that, and at the very least, you’re getting a great special teamer. Now to actually play the LB position at the next level, Gemmel will have work to do. His strengths come from his high effort play style leading to him playing sideline to sideline. When he struggles once a defender engages in a block, his below-average strength leads to him struggling to create plays, and at the next level, it’ll be tough to avoid when asked to defend against the run. Another concern is his durability when it comes to his recent injury. He wasn’t able to perform at the combine or his pro day because of the shoulder surgery he had in January of this year.

Weatherford is another player you notice coaching his teammates when watching his film. You’ll see multiple times on film where he moves them into the correct spot. He tends to play the S position more passively and feels like he doesn’t want to make a mistake, so he misses big-play opportunities. I think his football IQ would be a great asset to either the ps or as a depth S and special teamer. If he is able to progress to the point of being on the field on defense, I believe he would best fit in the box.