Which Players are Worth the Colts Staying Put For?

By SebastianBenchApril 25, 2022No Comments
Embed from Getty Images
With the 2022 NFL Draft only a few days away, we are all waiting on tenterhooks to see what Chris Ballard and his team do. We were given some crumbs at Ballard’s pre-draft press conference, but as usual, we are left guessing.

I signed up to #TeamTradeDown this year, believing the Colts needed to acquire more third round picks to address more of their needs at WR, CB, TE, and LT within the first few rounds of the draft. Given the signing of Stephon Gilmore, the need for a CB and the argument to trade down has been reduced. However, I think there is still a good case for trading down.

That being said, any discussion of trading down must consider who may still be on the board when the Colts are due to pick at 42. Guessing who other teams will and won’t pick certainly isn’t an exact science; it’s hard enough deciding who you’ll choose, let alone who everyone else will. It’s easier to make an estimated guess if a trade down happens while the draft is underway. But whenever Chris Ballard decides to trade down (if he decides to do so at all), he’ll have to consider which players he may be losing the ability to draft by giving away the 42nd pick. There are surely some prospects too good to pass up that would convince Ballard not to part with that 42nd pick. But who might those players be? 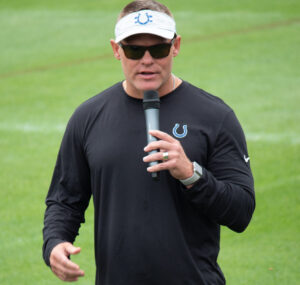 The player most worth staying put for is George Pickens. The Colts need to upgrade at Wide Receiver, and Pickens is one of the best receivers in a deep class. I expect Pickens to be drafted somewhere in the 35-45 range, so he could still be available when the Colts pick at 42. I wouldn’t even rule out the Colts moving up a few spots to draft him the way they traded up to get Jonathan Taylor in 2020.

The consensus is that Drake London, Chris Olave, Garrett Wilson, and Jameson Williams are the top four Wide Receivers in this class (not necessarily in that order), with all four potentially going in the first round. There are plenty of other talented WRs in this year’s class. Skyy Moore, Christian Watson, and Jahan Dotson have also been tipped to be drafted pretty early, while likely later selections like Alec Pierce and Calvin Austin have been hailed as receivers who could help the Colts.

However, Pickens could be one of the few Wide Receivers in this class who can boost a strong all-around game. Pickens can play physically, win contested catches, and be a potent deep threat. That deep threat would be invaluable as Indianapolis look for a long-term replacement for TY Hilton. Pickens’ versatility would allow Frank Reich to utilize him in several different situations. While having both Pickens and Pittman on the same offense as keen and capable run blockers would help Taylor and Hines keep the Colts as one of the best running offenses in the league.

Embed from Getty Images
Securing Pickens would give Indianapolis another talented Wide Receiver to pair alongside Michael Pittman for the foreseeable future. In the second half of last season, defenses had success against the Colts by stacking the box to stop Taylor and focusing on shutting down Pittman in the passing game. Having another offensive weapon defenses can’t afford to ignore should produce significant opportunities for Taylor and Pittman and Pickens himself.

If Pickens isn’t available, I don’t think the likes of Moore or Watson are worth staying put at 42, even if they are undoubtedly still talented WRs. If Pickens has already been taken, I think Ballard would be best served trading down for extra draft capital and taking a deep threat Wide Receiver like Alec Pierce.

George Pickens would likely be a firm first round prospect had he not suffered an ACL injury that significantly shortened his 2021 season. He recovered quickly from that injury, but it and the strength of other Wide Receivers in this class could mean Pickens falls to 42. If he does, Chris Ballard likely won’t mind his previous ACL injury, given Ballard’s willingness to draft Blackmon and Odeyingbo.

Speaking of injuries, the brutal Achilles injury suffered by David Ojabo at his Pro Day in March could cause him to slide to the Colts. Ojabo looked like a sure bet to be drafted in the first round prior to his injury. That injury and the strength of this edge-rushing class means he could slide significantly. If he does become available at 42, don’t bet on Chris Ballard letting him slide any further. We know Ballard doesn’t mind drafting injured players, and Ojabo has looked like an impressive prospect.

Embed from Getty Images
Pass rush isn’t as high of a priority for the Colts since they traded for Yannick Ngakoue and considering the significant capital used to draft Paye and Odeyingbo last year. However, you can never have too many good pass rushers, especially when the Colts’ pass rush was underwhelming last year. As a rookie, Ojabo would barely cost the Colts anything in cap space and would make for a formidable edge rush rotation alongside Ngakoue, Paye, Odeyingbo, and Lewis. A good pass rush is always important, but even more so when you’re looking to beat Mahomes, Allen, Burrow, or Herbert in playoff games.

If you get the chance to draft a first-round talent edge rusher in the second round, you’d better think very carefully before you pass up that opportunity. However, while I expect Ojabo to slide because of his injury, I still anticipate him going at the end of the first round or beginning of the second. I’d be surprised if he made it past all four of the first-round picks held by Green Bay and Kansas City.

One of the Colts’ biggest long-term needs is Left Tackle. It’s one of the most important positions in football and hasn’t been properly addressed since Anthony Castonzo’s retirement. Matt Pryor looks like he will be given the starting spot this season. If Pryor is good, the Colts will still need to add depth at the position. But if they aren’t certain Pryor is the long-term answer, they should be open to drafting their long-term Left Tackle.

The best LTs in Evan Neal and Ikem Ekwonu should both go in the top ten, with Charles Cross potentially going soon after them. However, Trevor Penning and Bernhard Raimann are two Left Tackle prospects generally expected to be taken towards the end of the first round or the start of the second.

Embed from Getty Images
Getting a long-term Left Tackle is hard enough with a high first-round pick; it’s even harder with a second-round pick. It’s plausible Indianapolis won’t have a first-round pick to use on an LT for a few years, given they might use their next few first-round picks to move up and take their long-term Quarterback.

If Penning or Raimann do slide to 42 and Ballard does think they’re long-term starting Left Tackles, he should stay put and take one of them. There will be talented wide receivers like Calvin Austin, who could be taken later in the draft and still be successful. Whereas later LTs are significantly bigger risks or less complete prospects than the likes of Penning or Raimann.

A final contender worth staying put for is Malik Willis. It’s unlikely Willis falls to the Colts. Detroit could conceivably take him with the second pick of the draft while several other Quarterback needy teams like Carolina, Pittsburgh, and Seattle lie in wait before Indianapolis. However, this is a challenging QB class to judge when it comes to the draft. Willis has the highest upside but is the rawest of the group. Arguably no QB in this class deserves to go in the first round. Still, the importance of the position means conceivably Willis, Pickett, Howell, Ridder, and Corral could go before the Colts are on the board. If teams shun this QB class or prefer other prospects over Willis, it is conceivable he falls to the Colts. Willis is undoubtedly a high-risk, high-reward prospect.

Embed from Getty Images
If Willis falls to 42, he could allow the Colts to find their long-term QB without giving up substantial prime draft capital. That is if Indianapolis does believe he has what it takes to be an elite NFL Quarterback. Willis’s rawness would mean neither he nor the Colts would likely have a problem sitting Willis behind Matt Ryan for two years. Learning from Ryan and Frank Reich would allow Willis to develop into a starting Quarterback and develop relationships with what is likely to still be a young Wide Receiving Corps.

We know how much Chris Ballard loves draft picks. Given the depth but relative lack of top-tier talent in this draft class, this may be a perfect year to acquire more draft capital. If Ballard is to be convinced to stay put at 42, I suspect it will require a real high-quality prospect to fall to him. Fortunately, we will no longer have to guess any of this in just a few days.

Thanks for visiting The Blue Stable! Let us know your thoughts on this article or anything Colts-related on Twitter @TheBlue_Stable.