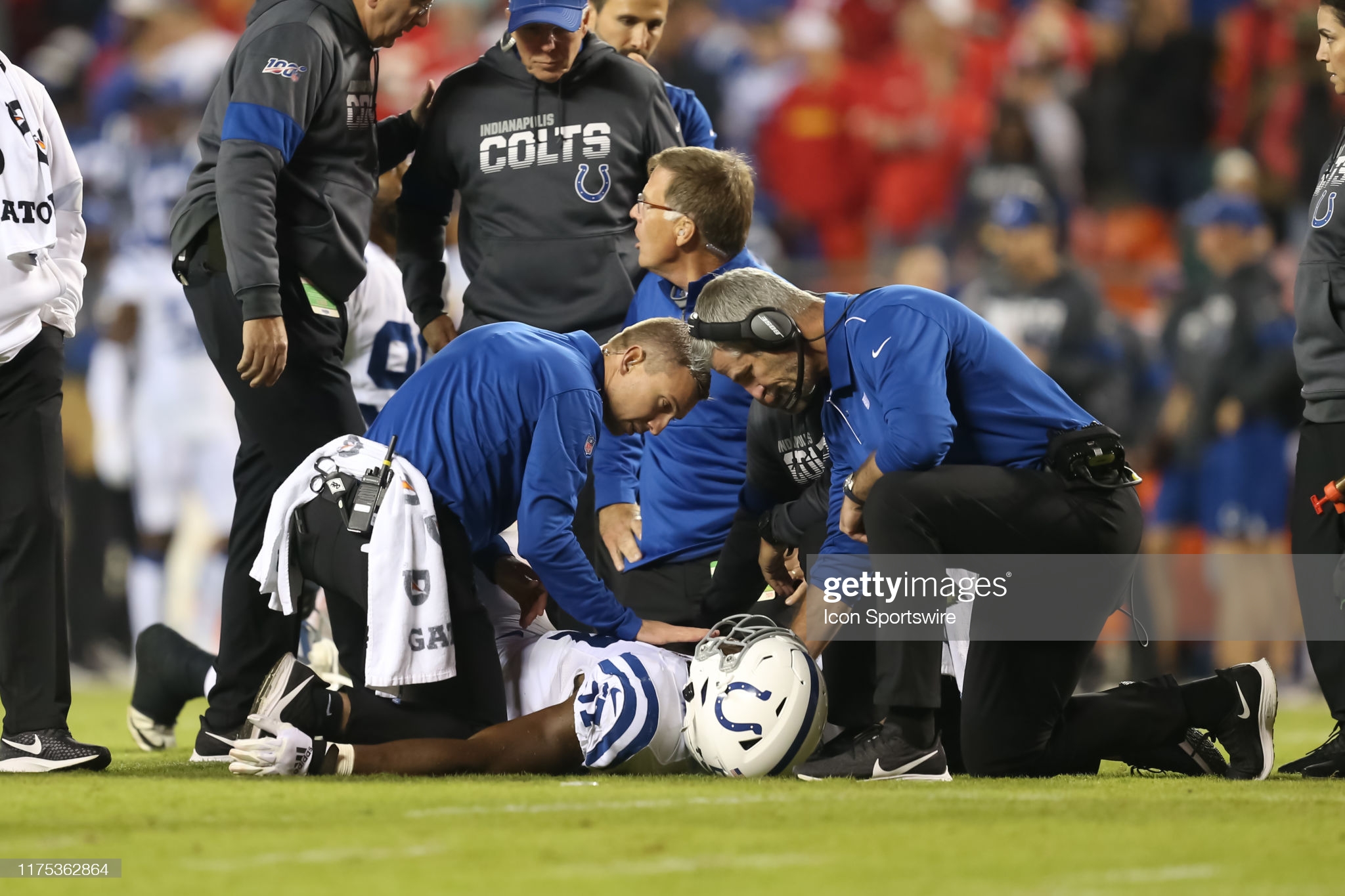 Ain’t No Sunshine (When You’re Gone) 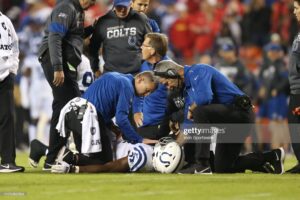 KANSAS CITY, MO – OCTOBER 06: Indianapolis Colts defensive end Kemoko Turay (57) lies injured on the field while staff attends to him in the fourth quarter of an NFL matchup between the Indianapolis Colts and Kansas City Chiefs on October 6, 2019 at Arrowhead Stadium in Kansas City, MO. Turay suffered a broken ankle on the play. (Photo by Scott Winters/Icon Sportswire via Getty Images)

Sprinkler heads spring to life, spraying nourishment to thirsty turf.  Groundskeepers scurry about, laying down crisp boundaries in the scorching summer sun.  The stage is set.  NFL training camps loom and the excitement from fans is palpable.

However, for one franchise, that seasonal optimism was recently dealt a harsh dose of reality.  On Tuesday, it was announced that Rams running back Cam Akers, a budding star, would miss the entirety of the upcoming 2021 season with a ruptured Achilles, reportedly sustained during offseason workouts.  Colts fans know firsthand how devastating this injury can be for a running back, with Marlon Mack currently fighting to return to form after facing an Achilles challenge of his own last season.

My sympathies go first and foremost to the player.  We can never underestimate the work required to be a successful professional athlete.  And to experience such a significant injury on the doorstep of new opportunities has to be simply devastating.  It is my sincere hope that Akers will undergo a successful rehabilitation process and return to the game stronger than ever before.

That said, with the news of this injury, I couldn’t help but turn my focus to our beloved Colts.  With expectations spanning from a division title to contending for a Super Bowl berth, which player can Indianapolis least afford to lose for 2021?  With several standout talents on the roster, I present the following shortlist of pillars for the upcoming season. 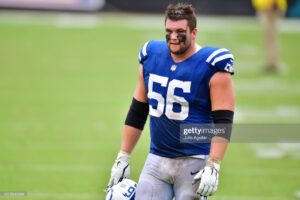 JACKSONVILLE, FLORIDA – SEPTEMBER 13: Quenton Nelson #56 of the Indianapolis Colts walks off the field after a 20-27 loss to the Jacksonville Jaguars at TIAA Bank Field on September 13, 2020 in Jacksonville, Florida. (Photo by Julio Aguilar/Getty Images)

Talent:  When Sunday rolls around, Nelson is serving up pancakes.  Through 3 NFL seasons, Nelson has allowed a total of 3 quarterback sacks.  In 2020, a season in which he allowed a total of 15 pressures, he received an overall offensive grade of 87.5 from PFF.  Simply put, Nelson is the present-day gold standard for interior offensive linemen.

Situation:  With the retirement of tackle Anthony Castonzo, Nelson will be called upon to anchor the left side of the Colts offensive line.  Chris Ballard addressed Castonzo’s departure by acquiring both Sam Tevi and Eric Fisher this offseason.  However, Fisher, who is ironically also recovering from an Achilles tear, is not likely to be sufficiently recovered to start the regular season.  And Tevi, who will likely play in Fisher’s absence, is capable but will likely need schematic protection support.

Depth:  Chris Reed, another free agent acquisition, would likely be called upon to replace Nelson in the event of an injury.  Reed is tenacious but has logged limited starts, mostly serving as a backup during his 5 years with the Panthers.  Rookie Will Fries could also be a dark horse candidate to fill in, but camp performance will be paramount, and his lack of experience would certainly be a concern.

‘Uh Oh’ Meter: 7  Losing Nelson would certainly be devastating to the Colts offensive line, particularly early in the season.  Eric Fisher is a former Pro-Bowler in his own right, and his addition should make the line less vulnerable.  However, there’s no way to sugarcoat the loss of a player of Nelson’s significance. 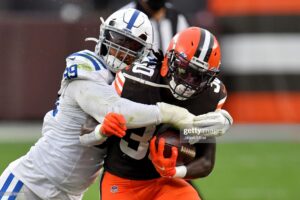 CLEVELAND, OHIO – OCTOBER 11: D’Ernest Johnson #30 of the Cleveland Browns runs with the ball while being tackled by DeForest Buckner #99 of the Indianapolis Colts in the second quarter at FirstEnergy Stadium on October 11, 2020 in Cleveland, Ohio. (Photo by Jason Miller/Getty Images)

Talent:  Another unquestioned Colts standout, DeForest Buckner, was as good as advertised in his debut season with Indianapolis.  Racking up 58 combined tackles, 31 quarterback pressures, and 9.5 sacks, Buckner wasted no time validating his acquisition by paying immediate dividends.  He was recently ranked 19th overall in Pro Football Network’s list of top 100 players for 2021.

Situation:  Buckner and the Colts defensive line are primed for another strong season.  Pairing with Grover Stewart, the two lock down one of the league’s premier defensive tackle tandems. In addition, having a depth of youth at edge rusher should allow the duo to wreak havoc from the interior.

Depth:  Sitting behind Buckner on the current Colts depth chart is Antwaun Woods.  I can foresee a platoon at the position in the absence of Buckner, where Woods serves in an early-down role.  In this scenario, first-rounder Kwity Paye would kick inside to apply heat in obvious passing situations.

‘Uh Oh’ Meter: 5  Don’t get me wrong, you don’t lose a top 25 player in the league without it affecting your squad.  However, I feel that the roster is deep enough to withstand the impact without it completely tanking the season.  Armed with some deployment creativity, a line devoid of DeForest could potentially still generate enough pressure to be effective. 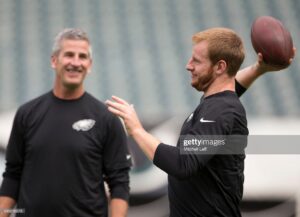 PHILADELPHIA, PA – SEPTEMBER 1: Carson Wentz #11 of the Philadelphia Eagles warms up in front of offensive coordinator Frank Reich prior to the game against the New York Jets at Lincoln Financial Field on September 1, 2016 in Philadelphia, Pennsylvania. The Eagles defeated the Jets 14-6. (Photo by Mitchell Leff/Getty Images)

Talent:  As the #2 overall selection in the 2016 NFL Draft, Carson Wentz was envisioned by many as a franchise-defining player.  In his sophomore season, under (then) offensive coordinator Frank Reich, Wentz set the league ablaze and seemed en route to an MVP season.  Unfortunately, an ACL injury prevented him from completing that season, and Wentz’s fortunes with the Eagles seemed to pivot on that moment.  Wentz arrived to the Colts via trade this offseason, after a somewhat contentious departure from Philadelphia.  His 2020 film leaves a lot to be desired; however the traits that once made him desirable (e.g. character, arm strength, intelligence, and pocket mobility) are still there.  It will be up to friend and mentor Frank Reich to restore confidence in this talented player, and the early returns on this experiment have been quite encouraging.

Situation:  In 2020, Philip Rivers performed amicably as a stop-gap signal-caller for the Colts.  However, as Rivers set his sights on retirement in the offseason, the Colts prioritized putting a youthful talent under center.  In acquiring Carson Wentz, the club has established that they see the potential for him to be a face of the franchise for years to come.

Depth:  The focus on youth is not limited to Wentz, as the 5-year pro is ironically an elder statesman in the Colts quarterback room.  Jacob Eason would be expected to take the helm if Wentz was to miss time.  Selecting Eason in the 4th round of the 2020 NFL Draft, the Colts have often gushed about the player’s physical tools. However, as Eason enters his second year, it’s also evident that he has taken a leap mentally.  Speaking of Eason, offensive coordinator Marcus Brady recently told the press, “Physically, you always knew that he could do it, that he had the potential that he was going to improve in those areas because of his arm talent and what he can provide out there. But mentally, you can tell that he took that next step.”

‘Uh Oh’ Meter: 8  Wentz clearly comes with some questions.  Is he better defined by his 2017 season or his 2020 season?  Will reuniting with coach Reich help to get him back on the right path developmentally?  Can he gel with new teammates in a new city?  However, even with all of these questions, he is the entrenched starting quarterback for 2021.  And any hopes that the Colts have of contending for the AFC South and beyond will hinge on the performance of #2.  Jacob Eason is a talented backup and may even win a few games as a spot starter.  However, given his lack of experience, I suspect that an entire season in command would likely be too much to bear at this stage of his career. 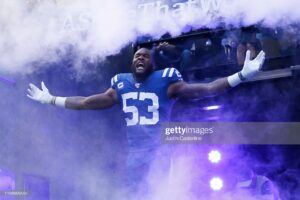 INDIANAPOLIS, INDIANA – OCTOBER 27: Darius Leonard #53 of the Indianapolis Colts runs onto the field before the game against the Denver Broncos at Lucas Oil Stadium on October 27, 2019 in Indianapolis, Indiana. (Photo by Justin Casterline/Getty Images)

Talent:  How much really needs to be said here?  Many Colts fans have made the argument for Leonard as THE most talented linebacker in today’s NFL.  Split hairs if you’d like, but ultimately you cannot deny his rightful place among the position’s elite.  Over his remarkable 3 year career, Leonard has averaged 139 combined tackles, 89 solo tackles, 2.3 interceptions, and 5.0 sacks per season.  He is universally lauded, and the Colts have reportedly prioritized a contract extension to keep Leonard in blue and white for seasons to come.

Situation:  Leonard is the captain of the Colt defense.  Long-time friend, teammate, and mentor Anthony Walker Jr. moved on to the Browns this offseason, and thus Leonard is expected to take an even more prominent leadership role.  He will partner with Bobby Okereke for a majority of the defensive snaps as second-level defenders in the 2021 Colts defensive alignment.

Depth: If Leonard (or Okereke) were to miss time, the next man would likely be Zaire Franklin.  Drafted in the late rounds of the 2018 draft, Franklin has primarily served as a special teams contributor during his 3-year career.  He is a dependable and serviceable substitute but certainly a far cry from the All-Pro Leonard.

‘Uh Oh’ Meter: 7  Darius Leonard has been a consistent Pro-Bowler while racking up stats and decimating offenses since joining the Colts in 2018.  In addition to his stellar play, he is a respected voice and holds a leadership role with the defense.  There’s no question; his loss would be a brutal blow.  The only reason that this score is not higher is that I suspect that Zaire Franklin could hold down the job sufficiently to prevent a total collapse on defense. Additionally, with a harassing pass rush and quality secondary play, I contend that Matt Eberflus could create enough of a diversion through scheme to keep the defense afloat.

When I set out to conduct this thought experiment, I didn’t expect it to be as terrifying as it ultimately became. But, as it turns out, the notion of losing any of these four candidates for the season has proven quite sobering.  I’m curious if you’ll agree with my assessments, but above all, let’s align on our hopes for health and longevity.  Like you, I relish the season that creeps tantalizingly closer with each day, and I want to see each and every one of our Colts hit the field healthy and at full strength come Week 1.  Be safe, and thanks for reading!