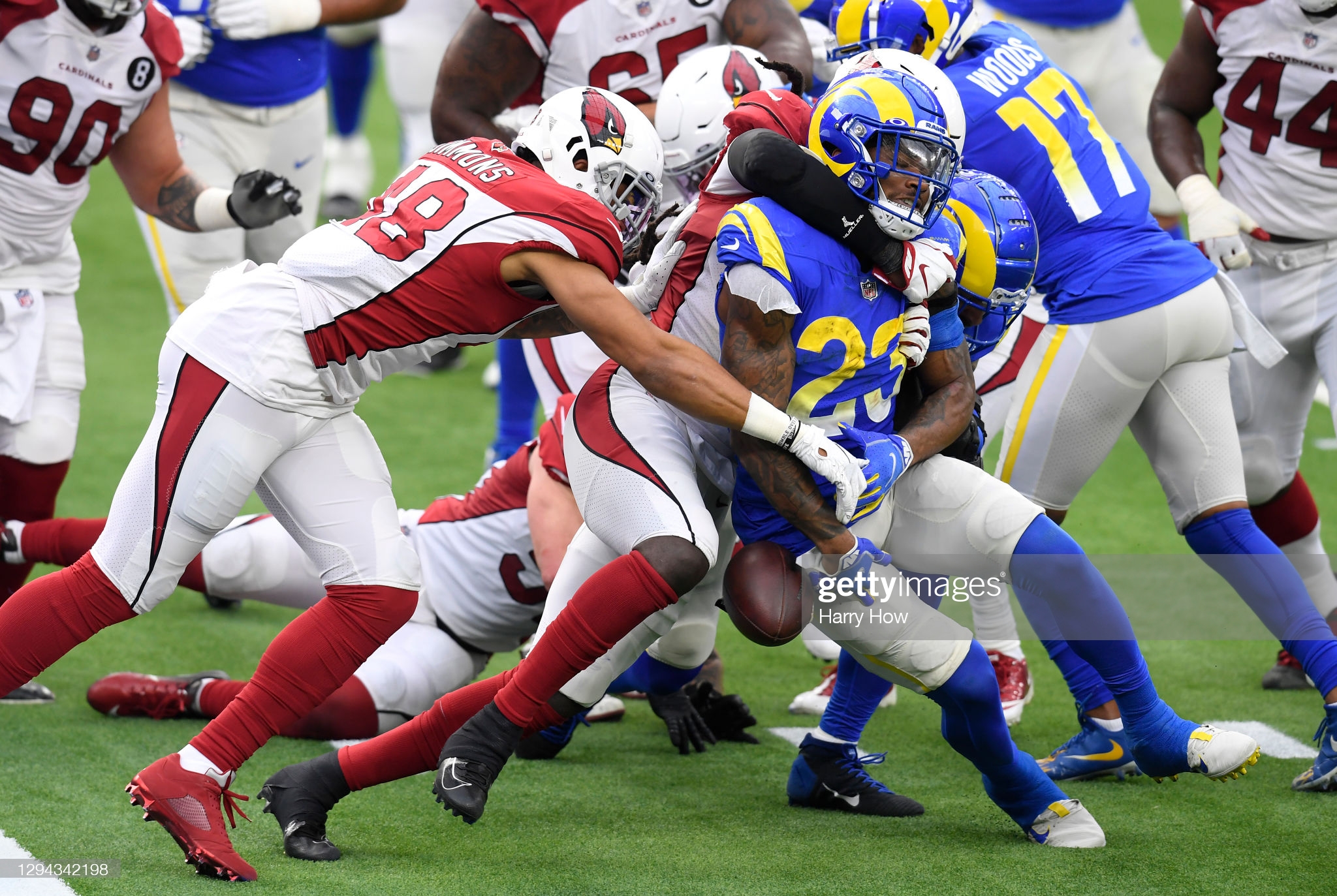 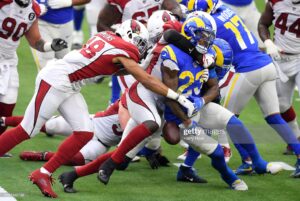 INGLEWOOD, CALIFORNIA – JANUARY 03: Cam Akers #23 of the Los Angeles Rams fumbles the ball at the goal line as he is tackled by De’Vondre Campbell #59 and Isaiah Simmons #48 of the Arizona Cardinals during the second quarter at SoFi Stadium on January 03, 2021 in Inglewood, California. (Photo by Harry How/Getty Images)

Injuries are the worst thing in sports.

Brutal blow for L.A., which loses its leading rusher from last season a week before camp begins.

As it was announced early yesterday, Cam Akers had suffered a torn Achilles. While injuries happen to fantasy stars year after year, it never makes it any easier when you get the news. Starting, I want to say I hope the best for Akers as even if he plays for another team, I still never want to see another man have to leave the field due to an injury. Especially going into year 2, where he was just picking up steam and had a lot of hype, this was devastating news to hear. However, I’m hoping he can be like Adrian Peterson after his ACL tear and come back better than ever after this year.

Due to this big hype surrounding Akers, he has become a popular 1st-2nd round pick in fantasy drafts in both dynasty and redraft. While this also comes from the hype around the Rams offense as a whole with the trade to acquire Matthew Stafford, Akers had a great postseason run he hoped to carry over into this season. Unfortunately, with Akers out for this season, this will drastically change the fantasy landscape, perhaps more than you realize. 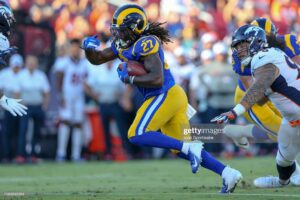 Cam Akers was a player that had the potential to be the RB1 this year and years to come. The Rams were prepared to give him the lions’ share of carries in their offense for this year. With the Ram’s getting Stafford, the offense was also ready to become much more explosive. With this Akers injury, it could potentially change how the Rams offense will operate this season. While I don’t believe any drastic changes will occur because I really like Darrell Henderson’s fit with this Rams offense, with Akers out, they could end up passing the ball more than they originally thought.

Darrell Henderson: Henderson is the most likely candidate to take over the RB1 role. Henderson took over RB1 duties last year early in the season when Akers got hurt. He even excelled in this role, and I grabbed him as one of the top handcuffs in as many leagues as I could. The depth behind Henderson currently is just a variety of backs drafted in the 7th round or undrafted. While I expect the Rams to end up adding another running back in free agency, there’s not any that stand out that I think the Rams would start over Henderson. Free agents include Todd Gurley(reunion?), Adrian Peterson, and Duke Johnson. I could also see a trade where the Rams could add a James Robinson, Jordan Wilkins, or another RB to add depth. Henderson is a high-end RB2, potentially RB1 for me currently.

Passing Game: With Akers going out and the depth at the running back position being thin, I believe this may mean the Rams could end up being a more pass-happy offense. Unfortunately, Stafford has become used to not having a great run game, which has meant that he passes for 4,000+ yards year after year. Cooper Kupp and Robert Woods stock has gone up ever since the Stafford trade, and I believe that one of them could now easily become a top 10 receiver in fantasy. Robert Woods has also shown that he can handle a handful of carries in the offense, so I expect this to continue. I expect both Woods and Kupp to be high-end WR2’s and Woods can potentially be a WR1. I also like Tyler Higbee as a late-round dart throw at tight end. 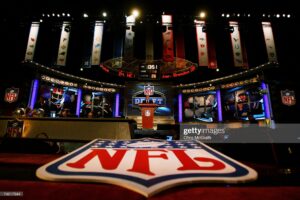 The Rams offense will not be the only thing changing in the fantasy landscape due to this injury. Drafts could now potentially see drastic changes with Akers out of the equation. Akers was being drafted as many teams RB1 for this coming season and dynasty so far this offseason, and Henderson was a late-round dart throw. Due to this drastic change, there is now one less top-tier running back and another mid-round running back available, and this could cause workhorse running backs to be pushed up even higher on many’s draft boards.

Based on Sleeper’s current ADP data, Akers was being drafted as RB8 overall, just behind Nick Chubb and above Deandre Swift and Najee Harris. He was being drafted in dynasty formats as a late 1st or early 2nd round pick while in redraft was a mid 2nd round pick. Since he was being drafted as an RB1, we have to imagine that having one less of these workhorse running backs, you will see an earlier run on this top tier running backs and see guys like Antonio Gibson, JK Dobbins, and Austin Ekeler being pushed even higher than their current value. This is due to the scarcity at the position, as well as many will think they can get wide receiver value later and still get a decent RB2 in Henderson, Myles Gaskin, or Mike Davis later on in drafts.

On the other hand, Henderson was being drafted around the 12th round range in dynasty and 10th-14th rounds in redraft. He was being drafted as RB48, which is after pass-catching running backs and high-end backups. Unless a major trade goes down where the Rams end up with a Melvin Gordon or a James Robinson, this means Henderson’s workload will catapult him up draft boards. Most likely, he will start out being valued higher than what he should be as he is the only running back of note on the Rams roster currently, but later in the offseason when the Rams most likely sign a free agent, I expect the ADP to fall to around the 4th-5th round range. This would most likely put him in the group of Kareem Hunt, James Robinson, Myles Gaskin, and Mike Davis.

Achilles injuries are not one you want to see in the NFL. Once you tear an Achilles, that leaves you without a lot of the burst you previously had. While Cam Akers will still be part of the future of this Rams offense, I’m not sure if he will become the overall RB1 in fantasy type of player like he had the potential to. Dynasty value on Akers right now is going to be as low as it will be, so if you still believe he can come back and be the man, now is the time to make an offer. On the other hand, if you own Akers and are worried about his future, wait until next offseason when the hype hopefully comes back around for Akers to return and sell for as much as you can. I hope we can see Akers full potential when he returns, as it could have been great, but I just am not sure we will ever see that now.

If you are an Akers owner and want to discuss trade packages to trade for or away Akers, leave a comment or message me on Twitter at @BigVerkamp.