By SebastianBenchJune 30, 2021No Comments
Embed from Getty Images

This is certainly a quiet time of year for NFL fans. Colts players can lounge on the beach or tend to his garden before training camp kicks off in Braden Smith’s case. Whilst us fans are left counting down the days until preseason and week one.

The fact this is the quiet part of the offseason for the Colts is no bad thing. It reflects that the team is well set up for the season ahead and has no internal dramas generating headlines.

The Colts aren’t the finished article just yet, but they’re a talented, well-rounded team. I’m sure there’ll be several areas Chris Ballard will be looking to improve next spring, but they look well set up for the season ahead.

The Colt’s offseason was, in all likelihood, over once Eric Fisher was signed. The left tackle spot he’ll fill was the last glaring need that needed to be addressed after the trade for Carson Wentz in free agency and the acquisition of Kwity Paye and Dayo Odeyingbo in the draft.

The Fisher trade didn’t quite empty the kitty as far as the Colts cap space is concerned, but there isn’t enough space for any significant further signings. That’s to be expected at this stage of the offseason.

The Colts could create some more room by engaging in the kind of salary cap sleight of hand Chris Ballard has understandably avoided so far in his tenure as GM. The space you create in the short term through those methods has to be paid eventually, and the New Orleans Saints and Atlanta Falcons will tell you how painful that can be.

It is still an option for the Colts if a player became available who would improve the team to make it worthwhile. But Chris Ballard will remain reluctant to go down that path given the need to pay Darius Leonard, Braden Smith, and eventually Quenton Nelson big money in the years to come.

The Colts front office is confident that those deals for Leonard and Smith will get done soon, they hope, before the start of the season. As Nelson was a first-round pick, they were able to exercise his fifth-year option. This gives the team an extra year to sort out a contract that will likely reset the market for Guards.

It may be a quiet few weeks for Colts fans as those important pieces of business are dealt with behind closed doors. But I’d much rather be in this situation than the teams who are busy at the moment. Because as teams like Green Bay and Miami will attest, the big news at this time of year tends to be bad news.

The two main types of stories in the NFL right now seem to be the big unresolved quarterback dramas and new contract holdouts. The longest-running quarterback drama is, of course, the Deshaun Watson situation. It won’t be resolved until the numerous legal claims are settled and could even last beyond that. The only certainty with the saga is that it won’t be ending anytime soon.

The Aaron Rodgers situation is more interesting and unpredictable, at least in the short term. The Packers have understandably shown no interest in trading Rodgers. At this stage of the year, it’s hard to see who outside of Denver would be in a position to trade for him.

If the Packers aren’t going to trade Rodgers, we’re left waiting to see whether Rodgers will make peace with the organization and play. Or whether he’ll stand firm and spend one of the likely last few years of his career on the sidelines.

I’d certainly rather my GM was able to spend these few weeks planning for next season instead of trying to get my reigning MVP franchise quarterback to agree to play football again. I suspect Texans fans would give anything for Chris Ballard to have been their GM for the past four years instead of Bill O’Brien.

The Patriots had an uncharacteristic off-season, splashing the cash at the start of free agency on Matthew Judon, Trent Brown, Jonnu Smith, and many others. It was the mirror opposite of the Colt’s typically quiet approach to the first few weeks of free agency.

Despite the Patriot’s profligate spending in the Spring, they now seem unwilling or unable to pay star Cornerback Stephon Gilmore what he feels he’s worth. The 2019 DPOY and Super Bowl winner is entering the final year of his contract and is only due $7 million this year. Gilmore is currently holding out until he gets paid more money or is given more certainty about his future.

Across the AFC East, the Miami Dolphins are engaged in their own contract holdout with their star Cornerback Xavien Howard. Howard led the league in interceptions last year and, alongside Byron Jones, is part of one of the strongest secondaries in the league. However, it appears that Howard isn’t happy about being paid less than Jones and believes he’s worth more than the $15m he’s paid on average each year.

The Dolphins have been one of the best-managed teams in the NFL over the last few years. They ruthlessly took advantage of the defenseless Houston Texans, fleecing them with the Laremy Tunsil trade. Last year they were a whisker away from reaching the playoffs and still entered the offseason with a lot of draft capital, which only increased after they traded with the 49ers.

It’s a good time to be a Dolphins fan, and I think fans of most teams can appreciate a great and historic franchise like Miami looking in such good health. On the other hand, I’m sure they’d rather not have to deal with the headache of one of their top players threatening not to play for them.

We’ll have to wait until the season is properly underway before we understand whether Chris Ballard’s approach to building the team has been successful. There’s even an argument to say that Ballard’s approach won’t be truly vindicated until the Colts win another Super Bowl.

That being said, I do think the lack of contract holdouts or deep rifts with key players is a mark of how well Chris Ballard has run the Colts since becoming GM.

Key players seem very happy to play for the team, and the organization appears to be a desirable destination for potential recruits. The fact Buckner, Rivers, Rhodes, Wentz, and Fisher have all been so keen to join the Colts in just the last two years speaks volumes.

There seems to be little doubt that new contracts for Leonard, Smith, and Nelson will be agreed upon in plenty of time, and there are no worries about whether the team has the money to pay these elite young players properly.

Through some great drafting and smart free agency acquisitions, the Colts look like a team capable of consistently making the playoffs, improving further, and winning a Super Bowl over the course of the next few years.

I think it will take a Super Bowl win to make Ballard’s tenure as GM an uncritical success and to satisfy Jim Irsay truly. But the talent, character, and morale within Colt’s locker room are immensely encouraging.

As a fan, it’s certainly much more relaxing to be twiddling my thumbs waiting for training camp to begin than worrying about the future of one of our best players. Long may the quiet summers for Colts fans continue.

Before I begin, I want to say how thankful I am to have gotten this…
Mason Roach 0 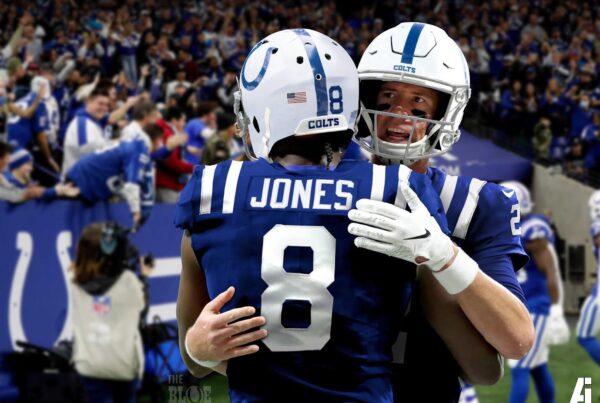 5 Free Agent Wide Receivers Who Make Sense for the Colts

Embed from Getty Images  As the draft came to a close this past weekend, many…
Zach Schankerman 0