This is the time of year that dynasty fantasy football players love. Now that the NFL Draft is over and we know where all the top prospects are going, it is time to schedule out rookie drafts and add talent to your teams! Here I wanted to put my positional rankings(not doing a Big Board due to the variance in leagues and team needs) to show you my opinion on where you should go in this upcoming rookie draft! Let’s start off with the Quarterbacks:

1.Trevor Lawrence(JAX)- Let’s keep it simple. Trevor Lawrence is the best quarterback prospect since Andrew Luck. Now we have to hope the Jaguars surround him with a team better than what Ryan Grigson did. Lawrence is going into his rookie season with good weapons, including college teammate Travis Etienne. If the Jaguars don’t get many wins this season, I doubt the offense will be the problem.

2. Trey Lance(SF)- Since the 49ers traded up to 3, this 2 spot was basically for whoever they drafted. Lance lands is THE best landing spot he could have asked for. Kyle Shanahan will be able to use Lance’s skillset like no one else would. While Lance may have to sit for a season, he will be worth the stash. Once he becomes the full-time starter, everyone that doesn’t have a top QB in fantasy will be clamoring for Lance.

3. Justin Fields(CHI)- I was honestly hoping that Justin Fields would have been drafted by the Broncos at the 9th selection of the draft, as they have the perfect offense for any QB that arrives there. But Chicago is a sneaky good one as well. Having Allen Robinson and Darnell Mooney in the WR room and David Montgomery and Tarik Cohen as RBs, they have an above-average skill room. The Bears also upgraded their offensive line, making this an offense that can flip the switch for this upcoming season.

4. Zach Wilson(NYJ)- We all knew the Jets would be taking Wilson. Still, unfortunately for him, he will be inheriting a bad team. While the Jets have made a lot of helpful moves this offseason for Wilson, he will still be a year or so away before reaching his potential. I believe his ceiling is higher than Fields, but at this moment, Fields is the safer option.

5. Mac Jones(NE)- Of course, the Patriots would land the guy that has been compared to Tom Brady. The Patriots were the best landing spot that Mac Jones could have had(well, probably other than San Francisco). With the Patriots wanting to do a quick rebuild, they now have some offensive firepower. Hunter Henry and Jonnu Smith are a great TE tandem that will give opposing defenses mismatches. While Cam is the starter, for now, I’m sure the New England staff will want to go back to their old ways sooner than later.

The running back class this year was very weak, especially compared to last year. Everyone had the same top 3 guys(Harris, Etienne, Williams), and then the rest were all waiting to see where they got drafted. Unfortunately, not all the running backs landed in spots I was hoping for (I really wanted to see Etienne on the Dolphins or Bills). But just because they didn’t go where I wanted doesn’t mean they won’t have success. Here are my top rookie running backs:

1.Najee Harris(PIT)- Najee was my top running back draft prospect in the draft, and I had him going to the Steelers in every mock draft I made. This was just a perfect match. The Steelers still have offensive line problems, and Big Ben isn’t getting any younger, but they are committing to the running game more by spending their first-round pick on Najee. While it may take a couple of years to be a top running back, I still believe that this year he will be a high-end RB2 or low-end RB1.

2. Travis Etienne(JAX)- I loved Travis Etienne while he was in college and couldn’t wait to see where he landed in the draft. While I was hoping he would have landed in Miami, New York(Jets), of Buffalo, the Jaguars are not bad either. I know Urban Meyer came out saying that Etienne was going to be their 3rd down back, but with all the holes Jacksonville has, I personally don’t believe that you give up that sort of draft capital for a 3rd down back. Etienne has the talent to overtake Robinson and Hyde in this running back room easily. I know what Meyer has said, but we have also heard that Andy Dalton was QB1 for Chicago…

3. Javonte Williams(DEN)- Denver traded up to select Williams in the early second round, most likely because they believed the Dolphins would take him the pick after. I believe that this year Williams will likely fill the Phillip Lindsay role and potentially more. Melvin Gordon has been good for the Broncos, but after this year, he will be a free agent, and Williams will have the opportunity to take over. Unless Pitts or one of the top WR’s are available, it may be worth taking a chance on Williams.

4. Trey Sermon(SF)- Any running back in the 49ers system, I want. The problem is, I don’t know who the starter will be. With Mostert, Jeff Wilson, and Wayne Gallman in San Fran, there will be a lot of competition. Sermon is a perfect fit in the system, and if given the opportunity, he will be a top fantasy running back. His upside is tremendous, but his floor is also very low. The question is, which end will we get?

5. Michael Carter(NYJ)- The Jets needed a new running back. While they added Tevin Coleman in the offseason and Ty Johnson showed some flashes at the end of last season, there is no top guy in this room. With Saleh coming over from San Francisco, the Jets are most likely going to want to bring a similar system. Carter has the chance to win this starting role, and in fantasy football, touches are king.

This year’s wide receiver class was deep but front-loaded. The top 3 were very good, but then a major drop off after. While the others are still good(which is why 5 went in the first round), they don’t have the same talent. Here is how I have this class ranked:

1.Ja’Marr Chase(CIN)- For the first time since Calvin Johnson, Chase was the consensus top receiver in the draft. Reuniting with his college QB, Chase may be able to rekindle that magic they had in 2019. While everyone in the fantasy community has been in awe of how great Justin Jefferson has been, Chase had a better college season than Jefferson. While he will be fighting Tee Higgins and Tyler Boyd for targets, Burrow will likely have his eyes Chase’s way.

2A. DeVonta Smith(PHI)- These next two receivers can be flip-flopped either way. I view them very close together. While Smith has size concerns, I still lean him. Smith, while small, won the Heisman trophy in the SEC against many defenders that get drafted high in the NFL. With the current receiving core in Philadelphia, I can see Smith getting 100+ targets this year. The long-term QB situation is still in the air, but Smith has the talent to be a great WR.

2B. Jaylen Waddle(MIA)- The second WR that reunited with their college QB, Waddle gets taken 6th overall by Miami. The probable closest prospect to Tyreek Hill that fantasy has seen, Waddle’s upside is tremendous. I can see Miami using him in several different packages, including the slot being Tua’s safety blanket. I truly think Waddle could be a difference-maker for Tua’s development.

4. Elijah Moore(NYJ)- I may be higher on Moore than many others are; there is a reason why. He is a perfect fit for the new Jets offense. Zach Wilson will likely be getting the ball out quickly, and Moore is a speedy guy that can get open easily. I still think that Jamison Crowder has a chance to get cut from the Jets, which would open up a lot of targets.

5A. Rashod Bateman(BAL)- Lamar Jackson needed a top target, and in this draft, he got one. While Sammy Watkins is also on the team, Bateman will be the top receiver on the team. While Baltimore is a run-heavy team, there is still a need to throw the ball. Bateman could be the missing piece that unlocks Lamar, just like Diggs did for Josh Allen.

5B. Rondale Moore(ARI)- Rondale landed in the perfect situation for his skill set. With how Arizona uses their offense, Rondale in the slot will give him plenty of targets while Kyler improvises in the pocket. This also means that the Christian Kirk experiment in Arizona is most likely over.

1.Kyle Pitts(ATL)- The man that deserves his own tier, Kyle Pitts is an Atlanta Falcon. Pitts is the best TE prospect since maybe ever. With how rare great TEs are, Pitts has the chance to be the first non-QB off the board in fantasy drafts. With the hopes that he can be the next Travis Kelce or even the next Darren Waller, his upside could be league winning. Even his floor seems to be pretty safe, most likely being an average fantasy tight end at worst.

2. Hunter Long(MIA)- Hunter Long is a great athlete with upside in this Miami offense. With this being Mike Gesicki’s last year on his rookie contract, Long is most likely his replacement. While it’s most likely going to be a longer-term investment, Long has the potential to be a top TE a couple of years down the line.

3. Pat Freiermuth(PIT)- The only reason that Freiermuth is not my TE2 of this class is because of the uncertainty at QB in the future. While I believe he would be a good TE in Pittsburgh’s offense, Ebron is still on the roster at this time, and it’s getting closer to Big Ben’s retirement party. Mason Rudolph should not be the QB of the future for the Steelers, but if he is, it will limit Freiermuth’s upside.

4. Tre’ McKitty(LAC)- If it were not for Jared Cook signing with the Chargers, McKitty would be up higher on my board. Having Justin Herbert as your QB and being a starter on this passing offense would deserve you a good spot in fantasy. Unfortunately, Cook will most likely be having a larger role in this offense than McKitty will. Still, because of this, once Cook’s contract is up, McKitty can hopefully develop into a large role in this Chargers offense.

5A. Tommy Tremble(CAR)- Tremble is an intriguing tight end to keep an eye on. While I personally do not want him, he can easily move up the depth chart in Carolina, as his only competition is Dan Arnold and Ian Thomas. If Tremble can work on his receiving game, he could get a lot of work as Sam Darnold’s future safety blanket.

5B. Kylen Granson(IND)- Yes, I wanted to write about Kylen because I love the Colts and want to see what he can do as our receiving tight end. Now, if we still land Zach Ertz(please, Ballard!), it would hurt Granson’s value. Everything I have heard about Granson so far has been good, and that he would be a good fit in the Colts offense.

Again I will say that the big board of rookies can be changed depending on what league format you are in and where your team’s needs are. If you have any questions on what I would do based on your team, leave a comment down below or message me on Twitter! @BigVerkamp

Co-Owner and Chief Web Officer of The Blue Stable. Also have my own company, Verkamp Designs. Follow me on Twitter: @BigVerkamp 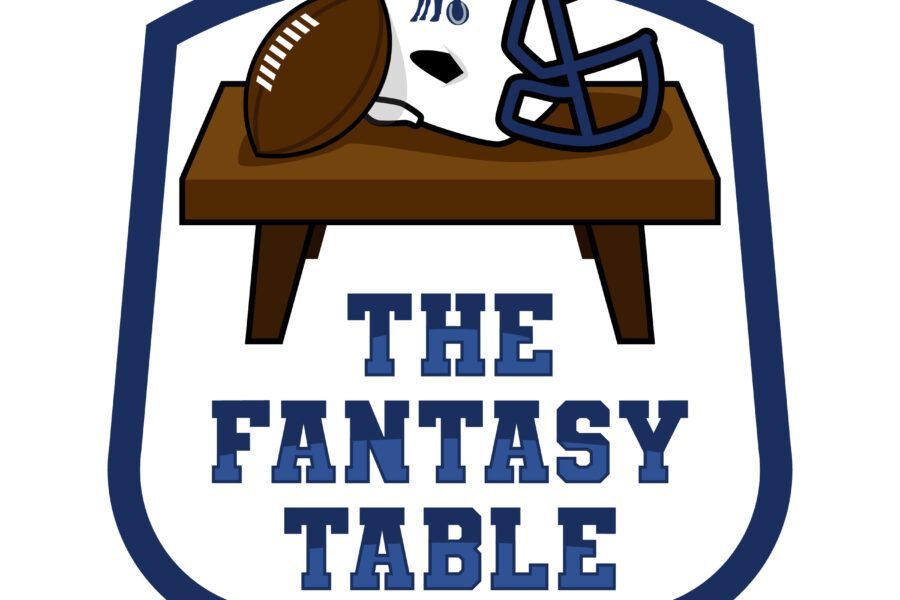 The NFL Draft. This is the time where dynasty owners are looking to see how…
LukeVerkamp 0