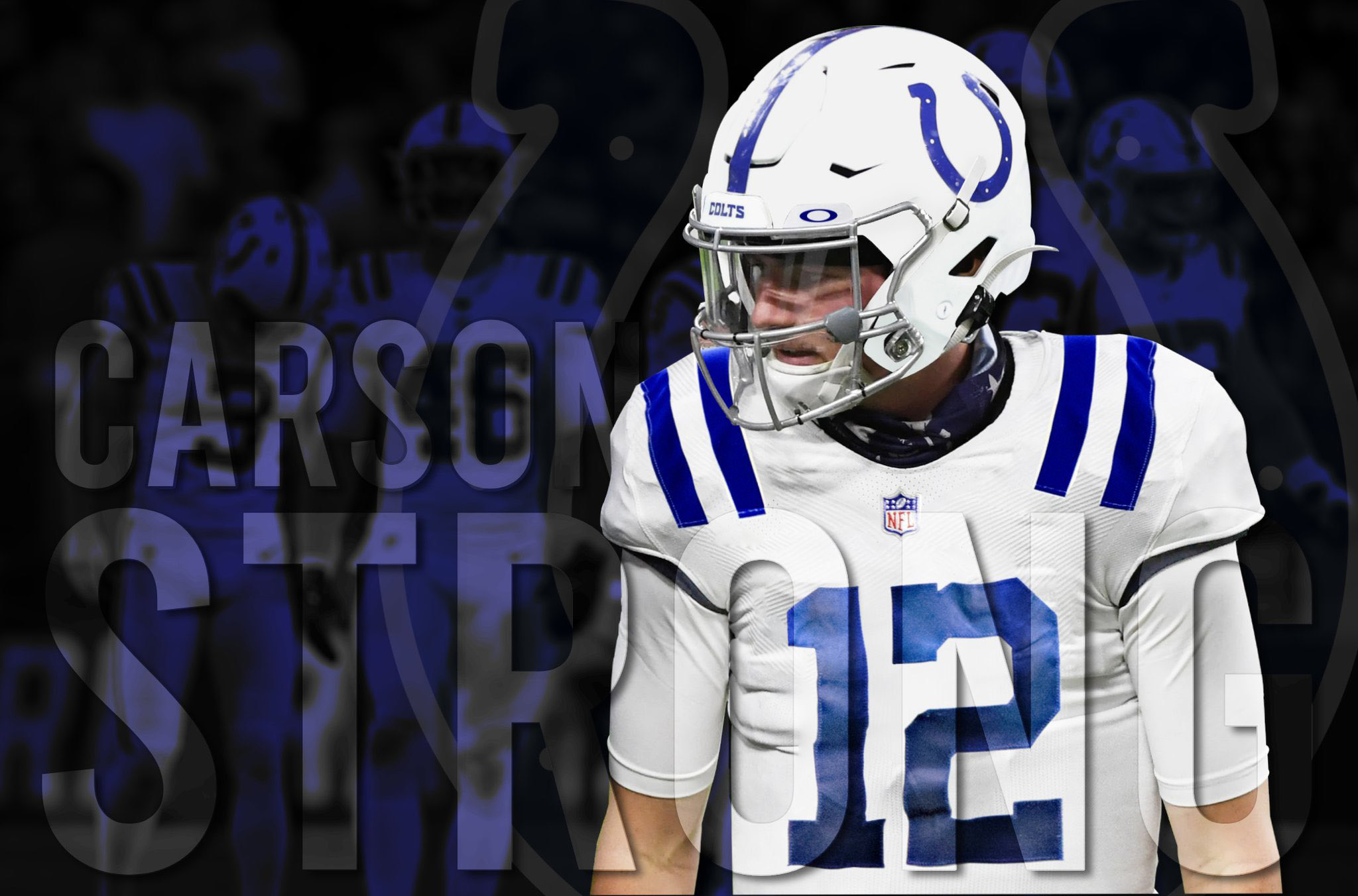 The Ultimate Colts Mock Draft 1.0: How to Save the Colts in 7 Rounds

By Zach SchankermanMarch 5, 2022No Comments

Home » The Ultimate Colts Mock Draft 1.0: How to Save the Colts in 7 Rounds

As the combine is about halfway through, I figured now would be a great time to discuss who might be some great potential Colts next year. In my view, the Colts have needs at QB, WR, LT, CB, and Safety, and the picks made reflected those needs accordingly. I went with the Best Player Available approach, and if the player was in a position of need, that was weighed heavily in my decision to draft a player. Undoubtedly, this is a huge off-season for the Colts. The Colts have needs at some of the top positions in football and a Coach and GM potentially running out of time to fix those problems. With that said, with the 47th pick in the NFL Draft, the Indianapolis Colts select…

This one was a pretty easy pick when I saw he fell to the Indianapolis Colts as I think he checks a lot of boxes for Chris Ballard and Frank Reich. First, he is a very accurate thrower, and he throws guys open deep. As far as decision-making goes, Carson Strong takes the layups, which we know the Colts value, and he protects the football well. As a player, he understands his limitations and knows he isn’t the most athletic guy on the field. I know recent league trends have been to take guys like Patrick Mahomes or Josh Allen, who can make plays off-script, but at some point, you have to play the position from the pocket. Other Chris Ballard checkboxes he checks off include the fact that he participated in the senior bowl, has solid traits as a QB, and his leadership presence is visible in pre-snap situations; he seems like a guy that players rally behind. He doesn’t have the best arm, but he will make the throws that you have to make to start in the NFL. With a strong run game, a solid offensive line, and an opportunistic defense, I believe the Colts just need a long-term QB so that Chris Ballard can start making aggressive moves as this team’s championship window starts to open in the next couple of years. It is important to note that Carson Strong may not make it to 47, and the Colts should definitely look to trade up for him if he is available. Our own Jack Gulley did an excellent film breakdown on Carson Strong, and you should definitely check it out:

In this trade, the Colts would get another premium pick in this year’s NFL Draft to address their needs and a future 3rd round pick. The Steelers get Carson Wentz to replace Ben Roethlisberger, where he fits really well; I think Carson Wentz is a really cheap veteran option with a good contract that will allow the Steelers to remain semi-competitive. In my mock draft, the Steelers selected Malik Willis, so having Carson Wentz start for a year and giving him a chance to rebuild his value is genius. Also, letting a raw but talented QB like Malik Willis sit for a year could be a really savvy choice for a franchise that needs a long-term QB option.

With this pick, the Colts address their second greatest need: WR. The Indianapolis Colts WR Room last year was simply not good, and Alec Pierce adds talent and athleticism to the WR Room. A guy who was constantly making plays for Cincinnati, Alec Pierce at 6’3 and 211 Pounds, ran a 4.4 40 yard dash, 40.5 inch vertical, and had a broad jump of 11 feet at the combine. Not only are the traits there, but he played at the senior bowl, which we know Ballard loves to draft players with traits and guys who played at the Senior Bowl. As a player, Pierce is very similar to Indy’s own Michael Pittman Jr. I think he would be a great compliment to Pittman. I believe that defenses would have a tough time covering two big athletic receivers like Alec Pierce and Michael Pittman Jr. This pick is a no-brainer, and Alec Pierce checks all of the boxes for the Colts.

When I saw that Bernhard Raimann was available in the 3rd round, and knowing that the Colts need a long-term option at Left Tackle, this pick makes a ton of sense. Bernhard Raimann is a former Tight End and moves very well for a guy who is 300 pounds now. I love the idea of getting the Colts a guy who can move in space next to Quenton Nelson on a cheap contract. He does a lot of things well but does need to continue adding strength, and he could definitely struggle with speed-to power rushers long term if he doesn’t improve his anchor. I would bring back Eric Fisher to help Bernhard learn what it takes to be a high-level professional in this league and then cut Fisher before the season starts or move him at the deadline to a team that needs an LT.

When I selected Cam Taylor-Britt, I thought it made a ton of sense because he was the best player available, and with Xavier Rhodes and T.J. Carrie likely gone, the Colts need to add some more depth to the CB room. As a perimeter corner for the Colts, he would provide healthy competition for Isaiah Rodgers and Rock Ya-Sin. Cam Taylor-Britt has a lot of traits that the Colts like; he is a great run defender and hits really hard. He is also great in zone coverage. He also participated in the Senior Bowl. Having a coach like Ron Milus work with him could be great for his development, and I think this would be a great value pick on Day 3.

One of Quarterback Carson Strong’s favorite targets at Nevada. At 6’6 and 240 pounds, Cole Turner is a solid athlete for his size and is a great hands catcher and a great catch radius. The Indianapolis Colts didn’t get a lot of production from their Tight Ends room in the passing game for a variety of reasons. To fix this, Cole Turner is an excellent weapon for the passing game that Frank Reich could take advantage of with bigger receivers like Pittman and Pierce, and I think he would thrive in Indianapolis. He would give Carson Strong a familiar target to throw to. Adding a guy like Cole Turner in the 5th round would be another great value pick on day 3.

With Julian Blackmon’s injury last year and Khari Willis manning one of the safety spots, the Colts need more safety depth, and I really like Nick Cross as a prospect. A rangy player with speed, I think he would fit nicely as a third safety for the Colts, especially in Gus Bradley’s scheme. He is also very versatile, which is something the Colts value. When you’re drafting on day three, it is all about developmental traits at this point. Nick Cross would be a nice versatile developmental piece that would give the Colts more depth at a spot they desperately need so they don’t have to roll out a guy like Andrew Sendejo next year at safety if someone gets injured.

If this name sounds familiar to you, it is because Tyquan just almost broke the record for the fastest 40-yard dash in Combine history at 4.28 seconds. At 6’2 with that kind of speed, that is a guy you want to draft late. He just came off of a great season at Baylor, and while he needs more development, I think his traits give him a chance to hit and hit big. The only thing that concerns me is his hand size, but everything else can be taught because, as they say, you can’t teach speed, and I think he is a very intriguing option to bring in.

A guy that Zach Hicks interviewed, I became really intrigued after reading his article (https://www.si.com/nfl/colts/draft/draft-interview-clarence-hicks). He is a bit of a tweener, and I think he is worth taking a chance on late because of his versatility and developmental potential. At the very least, Clarence Hicks is another guy who is a contributor on special teams, which is good on day 3.

This is a pick I absolutely love on day 3, and I think the Colts will really like him. A team captain with positional flexibility, Luke Fortner really adds value to your OL from a depth perspective. Especially with the potential departures of Mark Glowinski or Chris Reed, the interior offensive line is somewhere the Colts need to add more depth to. Luke Fortner could become a league starter eventually, and if you can get a starter on day 3 in the 7th round, that is a huge win, and it would round out a really great draft class for the Indianapolis Colts.