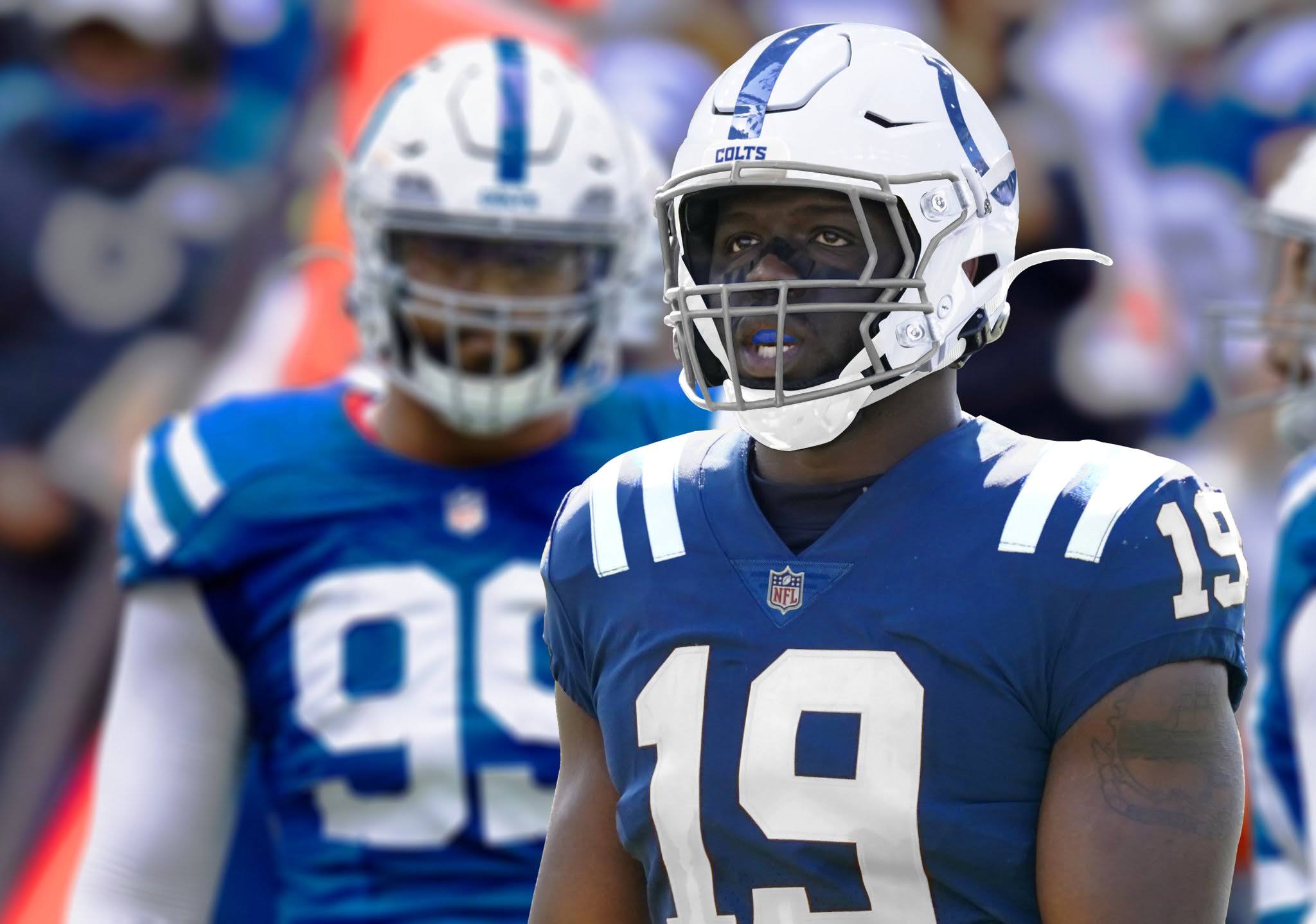 Throughout the pre-draft process, I preached for the Colts to either take an LT at 21 or trade back. The only major exception to this was if my DE1 Kwity Paye was there; however, I felt he was a likely top 20 pick and wouldn’t fall to the Colts at 21. Thankfully he did exactly that, and now the Colts have gained my top DE in this exciting class.

Kwity Paye fits the Colts like a glove with his relentless motor, elite athleticism (9.34 RAS score, but even that might be too low without his agility score), good tape and production, length at the point of attack, a developing pass rush arsenal, his leadership as a team captain, and a strong character/work ethic. The former Liberian refugee has dealt with a ton of adversity in his life but has consistently shown on tape and in team meetings that he has an indomitable will. During his first interview after just being picked by the Colts, his first words were that his Mom could now retire. Kwity recognizes all his mom sacrificed to give him the opportunity to play football, and he has consistently made the most of it.

On the field, though, Kwity displays flashes of absolute brilliance at the point of attack, with an explosive first step and a beautiful mix of speed and power. Already a stout run defender as he plays like a menace there, he still is in need of development of his pass rush moves to further take the next step. The strong hands and athletic traits are all there, and he has displayed at times some pass rush moves. However, the moves are basic at this point and don’t have as much variety or efficiency as one would hope. He isn’t completely raw like Jason Oweh in this draft class, but there is still work needed. With good coaching and a pass rush mentor (i.e., Robert Mathis to teach him the deadly and iconic spin move), that issue can be resolved. It was the only thing holding him back from insane production at Michigan and being considered a generational Edge prospect. It will be the key to transform him from freak athlete to perennial All-Pro.

Let me start by saying that Paye was not my EDGE1. He wasn’t even my EDGE2. And I only say that because he’s raw. I didn’t foresee him falling to 21, to begin with, but in hindsight, I’m glad he did. He is one of the best athletes at any position in this entire class. He ran a 4.57 40-yard dash at his Pro Day and put up 36(!!!) reps of 225. That is insane speed and strength for someone at his position. He didn’t run the 3-cone at his Pro Day, but in 2020 he ended up with a 6.37(!!!). To put that into perspective, if he did that at the Combine, that would be the 2nd fastest all-time. So yeah, his athletic ability was never a concern.

What was a concern, however, was his pass-rushing. His run defense is fine – good, even. But 8.5 sacks in the last 2 seasons at Michigan aren’t exactly stellar numbers. But the will to learn is there with this kid. And I think that’s one of the things I like about him so much. And let me be honest, if he went anywhere else, other than Indy, I don’t think he would do nearly as well as I’m confident he’ll do here. He will be learning to get to the quarterback more efficiently from a top 15 (or so) pass rusher of all time and a top 2 pass rusher, here in Indy, of all-time, Robert Mathis. A man who put up 123 sacks and 54 forced fumbles in 14 seasons will be the perfect mentor for a kid who only needs to learn how to get to the quarterback better. There is no doubt in my mind that the future Hall of Famer is not only excited to work with Paye but will be spending a lot of time with him this offseason.

With him and Deforest Buckner rushing the quarterback at the same time, he’s going to be subjected to many one-on-ones, giving him plenty of opportunities to make an impact. He may not turn into a perennial Pro Bowler after one season, but the ceiling is through the roof for Kwity Paye. And with the uncoachable tools he shows, I can’t see this pick going any other direction except up.

There’s a lot to like about the Colts taking Paye in the first round. He’s probably the best edge rusher available in what is admittedly a weak class for pass rushers. Jaelan Phillips is arguably more talented, but Phillips concerning injury history makes him a much bigger risk.

It’s hard not to get excited about Paye in the Colts defensive line once you’ve watched Chris Ballard’s press conference yesterday. Ballard spoke glowingly about Paye’s physical attributes, the potential to improve, and the quality of his character.

Paye fills one of the Colt’s biggest needs and was the best player available by the team’s estimations. Paye will benefit hugely from playing alongside DeForest Buckner, and in turn, he’ll stop teams from being able to regularly double team, Buckner. The biggest criticism of Paye is that his production will have to significantly improve if he is to meet the high expectations Colts fans have of him. That being said, it would appear as if he has all the tools to repay the faith the Colts have placed in him.

This grade is lower than it might have been because I was insistent before the draft that the Colts should take a left tackle in the first round and that Christian Darrisaw was the best option at the position. Given Darrisaw was my ideal pick and was available at 21, I have to downgrade Paye’s grade slightly. That shouldn’t detract from the fact Paye is a strong first-round choice with the potential to make a real impact for the Colts.

Leading up to the draft, many (myself included) suspected and even advocated for a trade down to accumulate draft capital.  However, when a player of Kwity Paye’s caliber falls into your lap, you get that draft card to the podium as quickly as possible.

As the number one edge rusher on my board and at a position of dire need for the Colts, I could not have been more pleased with the selection.  Though subterfuge often rules the day, many outlets had reported Paye as a real contender for a top 10 to 15 selection in this draft.

For those who may be unfamiliar, Paye checks many boxes as a prospect.  He has prototypical size for an EDGE, measuring 6’2” and 261lbs at his March pro day.  He plays with power and has demonstrated the versatility to rotate inside and rush the passer from the interior when called on.

Paye is precisely the type of prospect that Ballard and company were hoping for, and his selection in the 1st round provided a promising start to what is sure to be an eventful 2021 NFL Draft for the Colts.

This grade may seem like a slight knock on the pick. However, I have no qualms whatsoever with Kwity Paye here. I had a strong sense the Colts should and would trade down from 21 coming into the night, and I still believe they should have. In hindsight, trading out of the first round wouldn’t have been ideal considering there was a run-on pass rushers at the backend of the round, but if I were Ballard, I would have tried to trade down into the late ’20s and pick up an extra third. This strategy would have allowed the Colts to potentially land a starting tackle, pass rusher, and pass-catcher that could come in day one and contribute.

With all of that being said, I love Kwity Paye as a prospect. A run defender with a relentless motor, Paye can come in day 1 and work in the Colts’ base defensive sets to wreak havoc in opposing backfields. As a pass rusher, Paye still has a ways to go, but he has all the tools necessary to become a double-digit sack menace by the end of his rookie contract. Paye is also an amazing story who will undoubtedly work his tail off to maximize his extremely high potential ceiling. When Chris Ballard goes to sleep at night, I’m almost positive he will be having dreams of quarterbacks having to “Paye” (this will almost certainly be an overused pun by the Colts community for the foreseeable future) for crossing paths with his first-round pick.

Can you say home run? Mr. Ballard is a drafting wizard! I never doubt a Chris Ballard draft pick. Paye is an all-around athlete. He was a State champion long jumper! You can’t get more explosive than that! Growing up, one of my favorite video games was “WWE Here Comes the Pain,” and let’s say I will have fun saying here comes the Paye on Sundays! Paye is an incredible player but an even better human being. I was all for drafting a tackle like Darrisaw, but it was clear during post-draft interviews that Paye is the right guy for the Colts. My initial reaction wasn’t that this was a home run pick. In fact, I was quite angry with this selection because I saw Darrisaw on the board, and this team isn’t winning games without an LT. However, I looked and compared the tackle class vs. the pass rush class, and it’s night and day that tackle class is deeper, and we can find guys on days 2 and 3.

Paye is going to help this team on multiple levels. As a pass rusher, yes, he will make an impact, but as a run stopper is where I think he’ll make the most noise. Paye is always around the ball on film. In the Colts defense, everyone runs to the ball, and Paye will fit right in. Day 1 I think Paye has an immediate impact on defense and will be a leader on this roster for years to come. Opposing quarterbacks should be shivering right now having to see this Colts Defense.

All in all, I couldn’t be more pleased with this draft pick. Paye is a “Ballard guy,” and that was clear as the night progressed. What more can be said about Paye? He’s a home run pick by the Colts, which will become very clear as the season comes. Great player, even better human being. Amazing character, and Coltsnation will love this guy on and off the field.

It’s safe to say that the Colts got their guy. Kwity Paye had been slowly rising the draft boards of teams within the last couple of weeks. Paye did not have the seasonal stats that some of his edge classmates had this season, but for what he lacked in games played and stats this season; he definitely makes up for it with his out of this world athleticism and an extremely strong mentality that will help push him into the next level. Did you know that Paye’s three-cone drill at the combine was faster than Tyreek Hill?! The athletic potential for Paye jumps right off the page. As an NFL edge rusher, Paye definitely needs to develop and get better in the lab before the season. Having the opportunity to work with one of the greats like Robert Mathis will give Paye the opportunity to blossom into a true wrecking ball for this defense for years to come. I am truly ecstatic about this pick, and I am excited to see what kind of impact Paye makes on the defense next season. While the Colts still have some pieces to pick it up, it’s fair to say that they got the correct puzzle piece again!