Potential Colts Targets for Picks 159 and 179 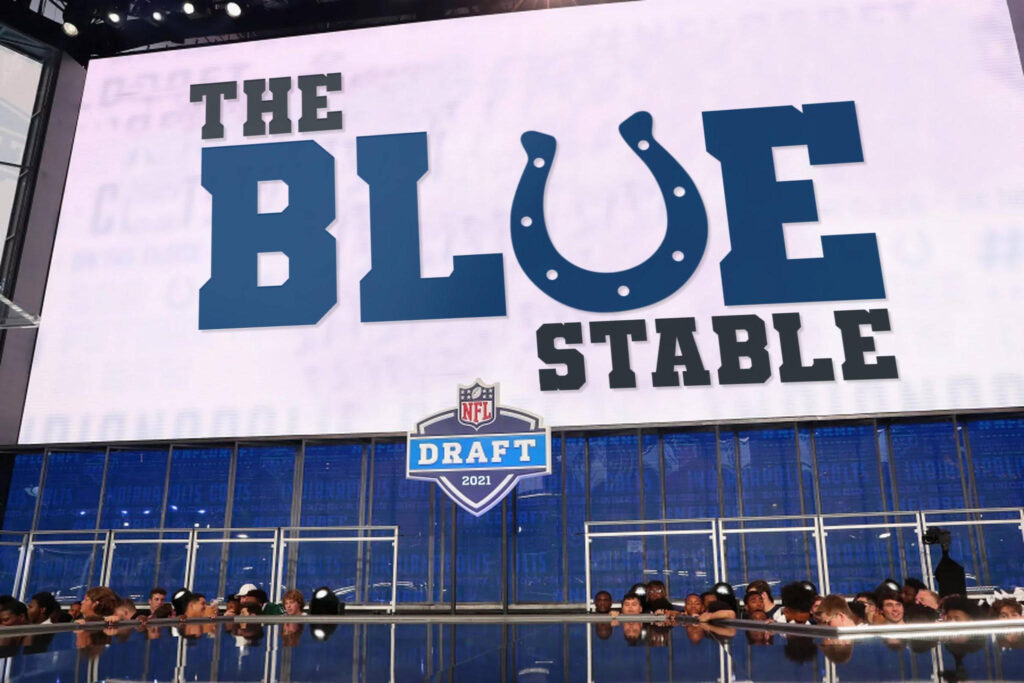 In next weeks 2022 NFL Draft in Las Vegas, Rounds 5-7 are what should excite Colts fans. Late-round gems seem to emerge every season, and with a GM like Chris Ballard, finding gems come often. Players found in the 5th round include George Kittle, Hunter Renfrow, Grady Jarrett, and many more impactful players around the league. Here are some players I believe the Colts should be targeting in round 5. Keep in mind the Colts have two draft picks in the 5th round. The first five will be for the 159th pick, and the other five will be for pick 179.

Thornton wowed everyone at the combine running a 4.28 40 time. Thornton is an impressive prospect, and it goes past his remarkable speed. Thornton is the definition of an athlete. Fifteen yards per catch on average while at Baylor makes Thornton a weapon on the outside. The Colts lack weapons, and Thornton would be an added tool for the Colts’ offense. I believe he adds value to special teams, which is always a plus. He’s shown a willingness to block, which would get him on the field as a rookie. Thornton, in my opinion, is a project player who’s not ready to play immediately. I believe he needs time to develop as a receiver, and I feel Colts legend and new Wide Receiver’s coach Reggie Wayne could polish him. Thornton has a long frame but is thin, making him struggle with physical corners. I am worried about the injuries with Thornton because of his frame; however, a healthy final two seasons at Baylor shows promise for his future. Thornton could be long gone by the 5th round. The draft can be a weird place where players go above or below their projections. Given Thornton’s impressive 40 time, it could carry him into being drafted early on day 3. I have a 6th-round grade on Thornton, but I believe he’s got a lot of upside. I ran two mocks on different sites, and both had Thornton being available in round 5 for the Colts.

Paul is an impressive human. Chris Ballard values character, and Chris Paul is a good guy. I used the term “good guy” to describe Paul because when you watch Ballard’s post-draft interviews, it’s one of his favorite sayings to represent the players he just brought to Indianapolis. Paul is the type of person you want in your locker room. Let’s check the Ballard boxes with Paul. High character? Check. Team captain? Check. Versatile? Check. Senior Bowl? Check. Paul checks many boxes for a late-round draft pick for Chris Ballard. He’s played every position except center. While I don’t believe he’ll be playing tackle in the NFL, I think he could add value behind Nelson or Pinter at guard.

Carter, while at Florida, improved in every season while showing growth as a pass rusher. I believe he’s a versatile pass rusher who can play all over the defensive line. He’s got a lot of pass rush moves in his arsenal. He doesn’t use one move; he’s focused on the ability to use multiple pass rush moves. The things that stand out with Carter to me are his hands, he’s explosive, and his high motor. Carter is a player who didn’t take plays off. Carter has a wicked first step that you want to see from a pass rusher. Along with his quick first step, he shoots his hands out quickly. He’s physical with his hands from the start. When he locks onto an offensive lineman, it’s hard to remove his hands off of you. Carter is a true tweener. I’m unsure if he’ll be an end or a tackle, but I think he can play at the next level. Carter has multiple blocked kicks on special teams, which makes him valuable on special teams in the NFL. The easiest way onto the field is to perform well on special teams. The Colt’s special teams unit is one of the best in the league, so it could be challenging to crack.

In the fifth round, one of the things you’re looking for is players with a high ceiling. Barno, in my opinion, has a very high ceiling. Before the combine, I realistically thought Barno could be a second-round selection. A few weeks away from the NFL draft, I’m not seeing a second round on Barno. I could see Barno going in the 4th round, but I see him in the middle to the late fifth round. Barno is an explosive athlete who runs a fast 40 time. While his 40 time was impressive, I don’t always see the speed show up on film. The bottom line is Barno is a hell of an athlete with little experience on the edge. He’s the definition of a developmental prospect with a high ceiling and a low floor. Barno could be a roster cut, but he also could be a quick learner and play to his potential.

I’m not sure what Baylor is feeding these kids in Texas, but they’re fast. Woods, like Thornton, performed well at the combine running the 40. Woods posted an impressive 4.36 40-yard dash. Woods is a physical player with a big frame. Standing at 6’2 and being able to run a 4.36 is outstanding. Woods has the speed to play in the secondary in the NFL. The biggest asset to Woods’s game is his presence in the run game. While he’s not the greatest tackler, when he sees it’s a run play, his 4.36 speed is on display as he closes to the ball. I get secondary isn’t the most significant issue for the Colts, but Woods could be a good asset to the team on defense and in special teams. Hines is getting a new role within the offense meaning the team may not want to use him as a punt returner. Woods can fill that if the Colts need it. Woods is an exciting prospect and, with a bit of toning, could be a draft day steal.

It’s no secret that Jack Doyle will be missed in Indianapolis. The Colts need to find an answer at TE. I firmly don’t believe the answer is MAC. I think the Colts are going to take multiple looks at TE. Ferguson is an exciting prospect because he reminds me of Jack Doyle. Ferguson is beyond slow. Ferguson is no athlete by any means. He will be an excellent inline blocker at the next level. Ferguson’s speed will impress no one, but what will impress you is his ability to get open. At Wisconsin, Ferguson was a safety blanket. If you saw the combine, you would’ve noticed Ferguson struggled to catch the ball, which was odd because, at Wisconsin, he was one of the most consistent pass-catchers. Ferguson isn’t afraid to do the dirty work. The things I like about Ferguson are his ability to make contested catches. His ability to get open. And finally, he’s got a nose for the end zone. Ferguson could easily step into the Doyle role and be a reliable target for Ryan in year one.

If you want to talk about a prospect who’s been up and down, look no further than Wydermyer. Before the combine, Wydermyer was viewed by many as the TE 1. Wydermyer has fallen off the face of the earth. There is a lot to like about Wydermyer, but there’s also a lot to not like. Wydermyer is versatile at A&M; he’s lined up in the slot on the outside, which could be valuable at the next level. Wydermyer has one of the most impressive RAS (relative athletic score) scores you’ll ever see. Not because it’s close to a 10, but because it’s not even a 1. It Means Wydermyer is no athlete, which is scary in today’s NFL game. Wydermyer has good size to play TE in the NFL. He’s an above-average blocker who’s willing to be a blocker. Wydermyer has the potential to grow into something. While I feel his value in year 1 is virtually nothing taking a stab at a TE could be beneficial.

I know we don’t need a running back. The Colts typically add a running back post-draft in the undrafted pool. Here’s why I’m beating the drum for adding a running back. I love Jonathan Taylor, and my biggest fear for Taylor is overworking like the Titans overwork Henry. Haskins is a big back who can be used in short-yardage situations. He could take unnecessary hits that Taylor can avoid in short yardage. Haskins is a physical runner, which makes him ideal for short yardage. He’s a patient runner, which would be good in Indianapolis running behind Nelson. Hines is expected to receive a more prominent role this season which will take away hits from Taylor. Adding a guy like Haskins who can be used in short-yardage situations would be ideal. However, I wouldn’t be surprised if the Colts wait to draft a running back till the 6th or 7th round.

The Colts desperately need receivers. It could be argued that the Colts have the worst receiving corps in the entire NFL. Ideally, I would love to see the Colts double dip with their first two picks. However, if that doesn’t happen, finding Johnson in the later rounds could be something. Like Kyle Philips, Johnson is a true slot receiver. Johnson is an excellent route runner. The Colts, in my opinion, lack a true slot receiver; adding Johnson could fill that role. Johnson, however, does have some issues. He’s got a bit of a drop issue, which could get corrected under the teachings of Reggie Wayne. If the receiver position isn’t addressed twice in the early rounds, I think Johnson could be a great value pick.

He started during his previous years at UCLA, but in his final season, he became a full-time starter and made the most of his opportunity. While he was the starter, Ogbonnia put up career-high numbers along the defensive line, including five tackles for loss and two sacks. Ogbonnia is a violent defensive lineman. Ogbonnia needs time to develop in the right system, but with the right coaching, I believe he can limit his negatives on the field. Ogbonnia has many weaknesses in his game, including high pad level, poor footwork, and lack of an elite first step, and he has shown that he doesn’t have the highest motor. Ogbonnia has potential but little versatility to add. The Colts have had some shakeup along the defensive line, so adding a depth piece wouldn’t be the worst thing.