Home » Live Experience From the 2022 NFL Draft in Las Vegas

Before I begin, I want to say how thankful I am to have gotten this amazing opportunity to cover the NFL Draft with Rashaad and for The Blue Stable. This was an extraordinary experience that I will never forget, and I plan on covering the 2023 NFL Draft in Kansas City for The Blue Stable. 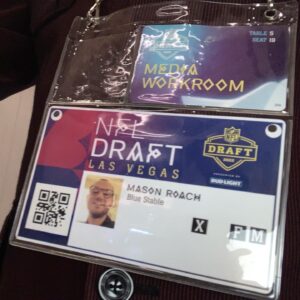 Imagine being in Las Vegas and it being more bustling than you can ever imagine. Of course, it is Las Vegas, and it is known as “the entertainment capital of the world,” but this weekend was truly something else. NFL Draft fever was thick in the air, and as entering Las Vegas, fans wore jerseys of all sorts along the Las Vegas strip. The sheer increase in the number of people, advertisements, and traffic was very evident, as it would take nearly a half hour to travel two miles. After never seeing the Caesars Palace and Caesars Forum in person, I had no idea how marveling the buildings were.

After walking and getting through the media credential check-in, we followed a walkway and were escorted inside the building by the employees working the draft. As you walk in, you begin to see signs and arrows pointing every which way, and you see countless employees and other media or NFL personnel just chatting it up. You begin to gaze at the spectacle of this event and the true enormity/magnitude of this event.

As you walk around the premises, you begin to realize how much fun you could have at the draft. You had the draft stage filled with thousands of hardcore NFL fans on the outside, and these fans were hungry to see their favorite teams draft new players. There was also a huge list of current and former NFL players, and fans had a chance to meet with them. Players like Deebo Samuel, Bo Jackson, Michael Vick, and Colts legend Edgerrin James made appearances at the Panini Autograph player stage and around the Caesars premises.

The NFL flexed their muscles, as they had Weezer perform on Thursday night, Ice Cube on Friday night, and artist Marshmello on Saturday night. Fans and media could not have been disappointed in the amazing musical acts, appearances from some of the NFL’s best players, and the overpriced NFL Draft Merchandise. The only downside of the outdoor experience was simply being in the heat. While Las Vegas was not extremely hot, it is not the most optimal place to stand for hours draped in your favorite team’s gear from head to toe.

Some fans spent the extra money and enjoyed a VIP room in the Caesars Forum. Those fans received the same treatment as Rashaad and me. As those fans had an individual room to watch and celebrate the NFL Draft, so did we and the rest of the “normal/regular” media members. I called myself and the rest of the media members in our room “normal/regular” because there were multiple media rooms!

There were multiple media rooms, and networks like ESPN, NFL Network, and radio stations like Sirus XM had their own rooms/set-ups at the NFL Draft. The room we were assigned to was the media room for the majority of the media members covering the draft. There were about 12 tables and each table seated about 60 people. With the hundreds of media members going to be there, I had no idea who to expect to be in attendance. 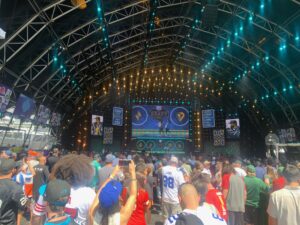 Once I got settled in the room, it was a pleasant experience. As the draft kicked off, the surprise early picks like Travon Walker and Drake London were announced, causing the room to react with complete surprise. Not only did London go to the Falcons, but little did everyone know about the numerous shocking trades ahead in the first round.

The Saints surprised the room by trading a treasure trove of picks to trade up and draft Chris Olave at pick 11. The Lions traded up 20 picks from pick 32 to draft Jameson Williams at pick 12. Six WRs were drafted in the first round compared to just one QB getting drafted in the first round. As Georgia’s defensive players, the wide receivers, and the defensive edge rushers dominated the 1st round of the draft, it was easy to see how much talent was still on the board.

Day 2 was a much more exciting day for myself and The Blue Stable, as the Colts finally had the opportunity to draft new players to the Horseshoe. With the Colts having pick number 42, it was not as long as expected. Knowing how Ballard operates was not surprising to see a trade down once the Colts were on the clock. By trading down with the Vikings, Ballard and Co. recouped an extra pick to help them draft another immediate impact player. With picks 53, 73, and 77, Ballard nabbed all three of the players he wanted, and these are players that he feels would make a difference in pushing the Colts toward a Super Bowl.

The three players that the Colts drafted are complete studs. Alec Pierce, Jelani Woods, and Bernhard Raimann are projected to compete for significant playing time at their respective positions next season. As the Colts completed a robbery of talent so far in day 2, it was not ready to end just yet. Little to my knowledge, the Colts were keeping tabs on other teams and wanted to trade up for another 3rd round pick. They wanted to use this potential pick on Maryland safety Nick Cross.

With the 3rd round coming to a close, the Colts finally got the break they needed, as the Broncos had officially agreed to trade the Colts (the 96th overall pick) for a 2022 5th round and a 2023 3rd round pick. As fate would have it, the Colts immediately locked in the selection of Cross from Maryland. Ballard taking the risk and trading for Cross helps show us how much belief he has in him. Ballard really likes this kid, and he will be a great addition to the already stacked Colts defense.

After Ballard traded for Cross, I really could not think of how this draft could get any better for the Colts. I was already satisfied with everything the Colts had achieved in the draft thus far, and it made me even more excited for Day 3. 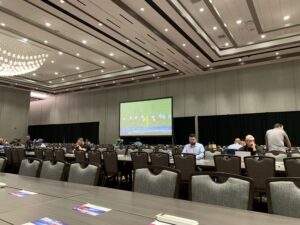 As Day 3 of the draft approached, the media room slowly began to feel like a ghost town, yet I was still excited to see what Ballard and Co. were cooking up in the Indianapolis war room. Ballard continued to make a clinic of his draft board, as he selected defensive lineman Eric Johnson (Missouri State) with the 159th overall pick in the 5th ground. Depth is very important to Ballard, and he addressed it with that pick of Johnson.

Ballard continued the theme of depth for the rest of Day 3, as he drafted players at positions lacking quality depth. These positions included tight end, safety, and another defensive lineman. Andrew Ogletree (TE) was selected with the 192nd overall pick out of Youngstown State, and Curtis Brooks (DT, Cincy) was selected with the 216th overall pick in the sixth round. Finally, Ballard chose S Rodney Thomas (Yale) with the 239th pick to round out the Colts’ draft.

While some may question how Ballard drafted on day three, I personally think he did more than enough. In my opinion, Ballard filled the most important needs to help the Colts reach immediate success this year. Time will tell us how this draft will play out for the Colts, but I personally think this is a home run draft from Chris Ballard in all facets. I think Colts fans should be on the edge of their seats and should be ready to make Lucas Oil stadium erupt this season. The Colts are in a prime position to make a playoff push, especially with these new pieces added to the equation. Do not be surprised if the Colts make some noise in the division this season!

Once again, I can not tell you how thankful I am to have gotten an opportunity to represent/cover the NFL Draft for The Blue Stable. This opportunity would not have been possible without the help of everyone at The Blue Stable and all of the fans who continue to support the site.