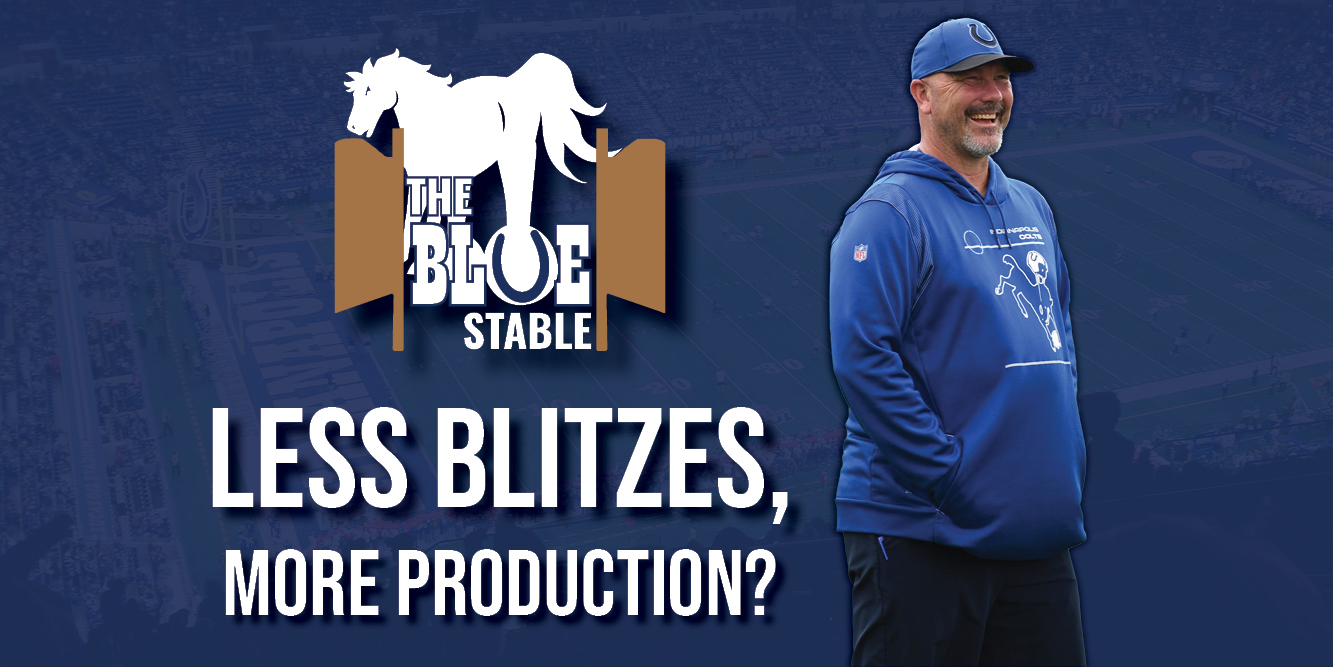 How Gus Bradley’s Lack of Blitzing Will Improve Defensive Production

Gus Bradley has spent years perfecting the art of “not blitzing.” After taking his strategies to multiple teams, Bradley finds himself with the best chance at maximizing his approach with the Indianapolis Colts.

To understand the unusualness of not blitzing in a pass-heavy league, I found two areas where Bradley was able to get the most out of his players: pass rush win rate & coverage percentage. The two statistics offer context behind Bradley’s intentions with his unique scheme.

Bradley’s strategy is dependent on the athleticism of his front four rushers. In 2021, he coordinated an athletically average defensive line into producing a pressure rate above-expected. Heading into the 2022 regular season, the Colts provide Bradley with the most athletic defensive line in his coaching career.

There are differences between the Colts’ new defensive scheme and Matt Eberflus’ scheme, but both involve a lack of blitzing. I break down the differences and why Bradley’s “no blitz” strategy will yield a more efficient pass rush.

Last season, Bradley’s blitz rate of 12.1% was a career-low. However, the lack of blitzing is not a recent emergence; in fact, Bradley-led defenses have been last in the NFL in blitzes per dropback since 2019.

It is important to note that blitz rates and pressure rates encompass all positions on defense. So when a team doesn’t blitz often, it can be assumed that the D-linemen and edge rushers generate most of their pressures.

These two positions make up the defensive front four in Bradley’s 4-3 scheme. His scheme depends on their skill sets and athleticism to create pressure on the quarterback.

Collectively, the 2021 Las Vegas Raiders front four had an average pass-rush win rate of 14.7% (3.2% above the league average) (min. 100 pass rushing snaps). Maxx Crosby was the biggest contributor to this percentage, winning his battles in the trenches 26.8% of the time.

It would be naive to assume that these wins were all executed organically with no flavor. So how did Bradley season his front four to maximize their success rates? The answer: Tony Chac- I’m kidding; he included stunts.

Stunts are used to confuse an opposing offensive lineman away from their assignment, which leads to a greater chance of winning pass rushing snaps. Bradley’s strategy involves holding back on the blitz calling so the front four can get creative with stunts.

Fans may think that this strategy can become predictable, but the repetition of stunts allow the front four to gain familiarity with each other’s maneuvers, leading to more well-timed and perfected stunts.

I believe the Colts front office saw Bradley effectively deploy this strategy on the Raiders’ front four. One of the pass rushers who benefited from this strategy the most was Maxx Crosby.

Crosby’s production was elevated by deploying these stunts reserved for the front four, and the Colts couldn’t help but want to replicate it through their own players.

To help give a visualization, YouTube channel Las Vegas Raiders Network detailed the nuances of Bradley’s stunts used in the Raiders’ most dominant pass rushing game.

Athletic rushers are a requirement in this scheme. These stunts may not be overly complicated, but they demand constant physicality and aggression. The more athletic the front four, the better the production.

Speed and strength are key traits in winning pass-rushing snaps and pressuring the quarterback. In Bradley’s scheme, pressure relies on the natural athleticism of the front four. Linebackers are sent into coverage instead of being used in blitz packages. In other words, Bradley believes in quality over quantity.

By using Player Profiler’s Speed Score and Burst Score, I found how Bradley’s old front four and his new front four compare to the league average.

As you can see, Bradley will be inheriting a more athletic defensive line this season. I’ve also included QB pressures and blitz rate to allow insight into Bradley’s ability of maximizing the front four’s production.

In the past, the Colts have struggled in pass rush production. They’ve maintained a low blitz rate, but have failed to utilize their talents properly.

Frustrations from fans tend to grow in these situations, and rightfully so. Bradley’s scheme is not aesthetically pleasing, nor is it perfect. But it’s hard to find flaws in the scheme’s ability to develop players’ pass rushing skills.

Chris Ballard has a history of drafting players whose athletic scores are off the charts. He has exchanged and spent highly-valued draft capital for a front four with a high ceiling. Now with the defense under Bradley’s control, the front four has their best chance at reaching their potential.

What About The Linebackers?

Linebackers are noticeably absent in Bradley’s pass rushes. In 2021, the Raiders linebacking core was at the bottom of the league in percentage of snaps rushing the passer. So what are they doing instead?

Bradley’s cover-3 system calls for linebackers to drop into a soft zone as much as possible. Linebackers under his system have some of the league’s highest rates of playing zone coverage in the NFL.

The soft zones are called on to eliminate deeper passing plays and offer the front four defenders enough space to perform stunts comfortably. The biggest trade-off to linebackers playing soft zone is that it gives elite QBs time to make quick throws and methodically drive down the field.

The Colts have upgraded their secondary to combat this issue. Players like Stephon Gilmore, Rodney McLeod, and rookie Nick Cross increase the depth of the defensive back position and will work to restrain the number of completed passes around the first down marker.

What Will Bradley’s System Change?

There is a common misconception that all 4-3 defenses operate in the same fashion. Despite the previous regime, led by new Bears Head Coach Matt Eberflus, and the new regime operating a 4-3 defense, the play calls and executions are different.

For Bradley, his system hyper-focuses on linebackers dropping back into zone coverage and depends on the front four to generate pressure. Eberflus’ system is less purebred. He mixes in more man coverage assignments and calls for blitzes more often.

Notable players that come to mind that will be most affected by the systemic changes are Darius Leonard, Bobby Okereke, Kwity Paye, and other rotational D-linemen.

Leonard’s time pressuring the quarterback just might be over. He’s still a stand-out player that will move mountains to get his hands on the football, but from now on, his pressures will come from attacking scrambling quarterbacks or the rare blitz call. Out of all the players I’ve named, Leonard’s play-style is the most constrained.

Okereke is a rising talent in the league that has shown glimpses of being a starter for many years. The biggest obstacle he needs to overcome in this system is his consistency in coverage. He isn’t below average in zone, but the high demand for zone coverages could increase the volume of his inconsistencies. So as long as Bradley sustains his methodologies, he will need to improve on the coverage elements of his game.

Kwity Paye is my favorite candidate to become Bradley’s new Maxx Crosby. The opportunities Paye will receive rushing the passer are endless. DeForest Buckner is special enough to garner the attention of multiple blockers, leaving gaps for quick stunts around the offensive tackle.

With Yannick Ngakoue set to line up against the more dominant side of the ball, Paye has enough speed and strength to compensate for any lost ground. The stars have aligned; now it’s his time to shine.

Rotational defensive linemen are given a new life and will see more snaps on passing downs in the new scheme. Players like Tyquan Lewis and Dayo Odeyingbo are crucial in sustaining a consistent pressure on the quarterback throughout a game. The defensive line position will be demanding under Bradley. The stamina needed to generate a pass rush with only four defensive players should not be overlooked.

The Colts are blessed with a tremendously athletic defense. It can also be argued that the Colts feel more blessed to have Bradley on the staff. His defensive mindset compliments the Colts roster better than Eberflus’. Eberflus’ strategies delivered solid defenses, but would later become inefficient due to its inconsistencies.

Bradley will install greater confidence and less distractions into the defense. The lack of blitzing will still be a prominent factor in the Colts defense, but this time it will yield a more efficient pass rush.