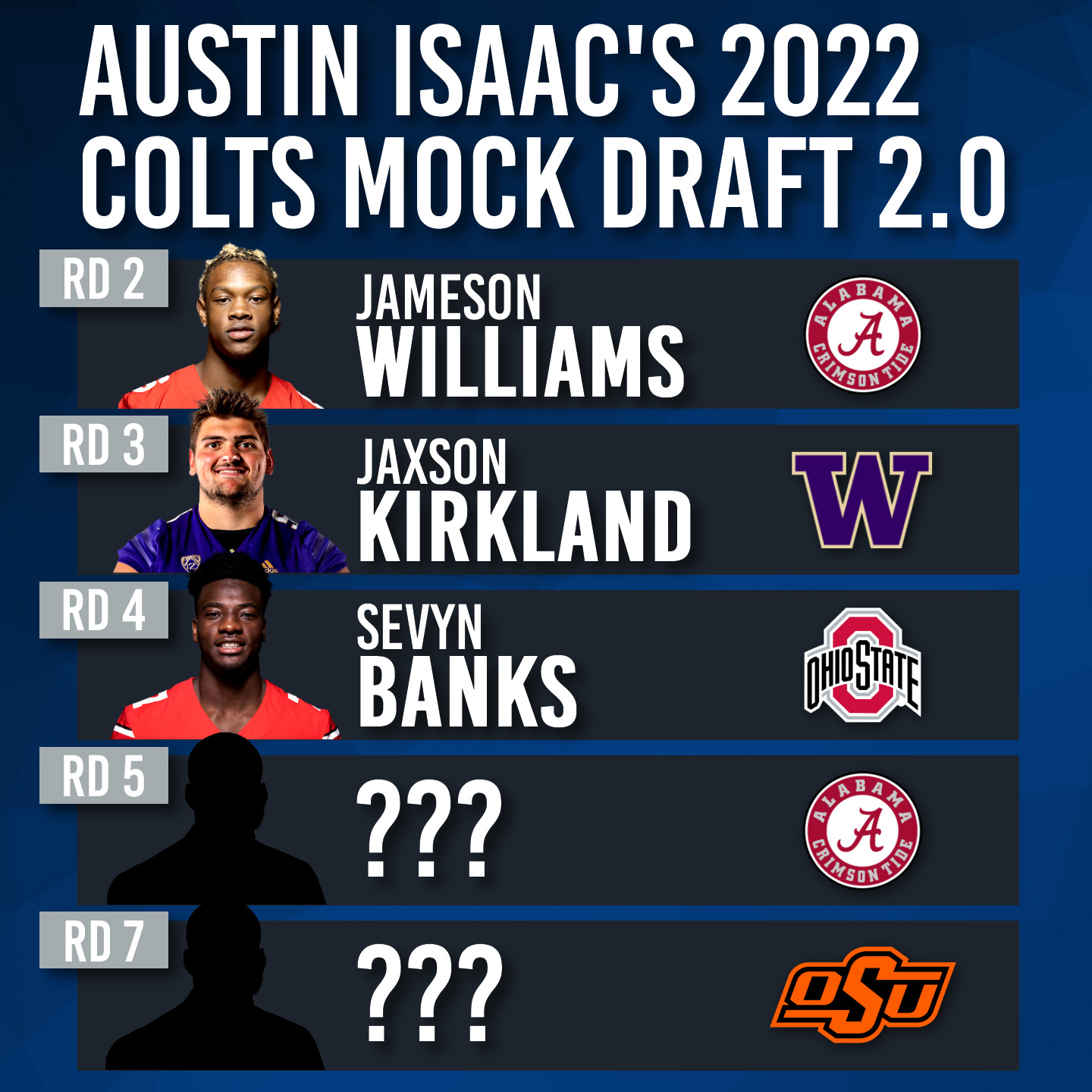 We’re officially at the midseason mark, and that means it’s time for another mock draft. We’re going to try to get these out every two weeks to give everyone a decent look at nearly every possible prospect for the Colts coming up in the 2022 Draft. Again, not spending too long doing an introduction, as we did in the first mock, but this is a good one. It may even be one of the best draft classes we’d get.

The transfer from Ohio State has been a dominant force for Alabama so far. He has been a deep ball machine, and his ability to use his speed to get behind the defense has won games for the Crimson Tide. He is currently sitting with 870 yards and 7 touchdowns through 9 games. He is also averaging an astounding 19.3 yards per catch. The one thing the Colts have needed since prime T.Y. Hilton is a true deep threat at wide receiver that can take the top off the defense. Carson has shown on many occasions that he can get the ball down the field to receivers if they’re down there. Jameson Williams will be there every time. With elite speed and solid route running at 6-foot-2, Williams has been getting first-round hype by many, but there’s a good chance he could be there at pick 45 due to his lack of body weight and strength.

One of the best offensive tackles in a relatively deep tackle class, Jaxson Kirkland, has only improved since starting as a redshirt freshman at Washington in 2018. He was a Freshman All-American that year, made Second-Team All-Pac 12 as a sophomore in 2019, and was First-Team All-Pac 12 in 2020. Kirkland is insanely effective in both run and pass protection and really doesn’t exactly have any weaknesses. Getting him in the 3rd round to replace the up and down talent level of Eric Fisher would be a steal.

I tried to refrain from taking the same players as I did in the first mock we did, but the value of Sevyn Banks in the 4th was just too much. I understand the top need for Indy is almost certainly cornerback, but if you know you can get one like Banks in the 4th, you can afford to grab other positions first. Again, not going to spend a ton of time running through his talents, as I already did in the first one (you can read what I said about him HERE). But being able to grab a player here that was projected to be a first-round pick before injury would greatly benefit the Colts’ lacking secondary.

Another player that was garnering serious first-round attention, Josh Jobe, would be the perfect corner to pair with Sevyn Banks. He fits Chris Ballard’s mold of a lengthy, physical cornerback with an excellent character to a tee. In addition to being very good in coverage, Jobe also adds the ability to play the run very well. There aren’t too many weaknesses to his game aside from penalties being a massive issue with the amount of physicality he brings to the table. He is almost similar to an early Rock Ya-Sin in that regard, but just as Ya-Sin has shown this season, it can be fixed with coaching. I highly doubt Josh Jobe falls to the 5th round, but with him being 24 years old already and in this particular mock where he did, you have to take advantage of that.

In the last mock, we took LB Zakoby McClain out of Auburn in the 7th round. Here we take his counterpart, Owen Pappoe, in the 5th. Pappoe is really a do-it-all outside linebacker. Very identical to Darius Leonard, he has excellent athleticism, he’s a great tackler, and also has the ability to get into the backfield and rush the passer. The former 5-star recruit is slightly undersized at linebacker, but so is Leonard. With two other linebackers on the Colts’ roster currently pending free agents,  Pappoe would be great depth to pick up at the end of the 5th.

I went through this mock under the hope that GM Chris Ballard bit the bullet on his misses at defensive end in past drafts and got a starting pass rusher in free agency. However, even if he finally does decide to spend money in free agency, he still has two pending edge rushers in contract years (Kemoko Turay and Tyquan Lewis) and one in a contract year next season (Ben Banogu). Lewis has looked the best of the three, but he’s not guaranteed to come back after a season-ending injury.

Just like Lewis, Tyreke Smith is another defensive lineman out of Ohio State. The Buckeyes have a good track record with defensive linemen in the NFL, which could outweigh Buckeyes’ curse on the Colts’ roster. Another player that I would be genuinely surprised if he fell this far in real life, but you take what you can get when computers are controlling other teams in mock. Smith is an inconsistent pass rusher but shows flashes of being a starter in the NFL. Last season, he tied the team lead with 33 pressures, and this season has 3 sacks and 4 TFL in 6 games. Let Robert Mathis get his hands on him, and he’ll clean up his game fast.

The positions of need on this team are pretty clear-cut. Starting safeties for the Colts are pretty set, but the depth has been a serious issue. With Julian Blackmon out for the season, the Colts have been rotating in many different safeties, but mostly Andrew Sendejo, which has been a terribly failed experiment. Harvell-Peel would be a significantly better option as quality depth. Excellent speed, physical tackler, and fantastic at forcing turnovers. With 10 interceptions and 2 forced fumbles through his career at Oklahoma State, Harvell-Peel can get you the ball when on the field.

With Jordan Wilkins off the team and Marlon Mack hitting free agency, the Colts will be left with only two running backs on the roster. They have the do-it-all back in elite stud, Jonathan Taylor. They have the pass-catcher in Nyheim Hines. All that they’re missing is the bruising power back. Kevin Harris is just that. A violent runner that searches for contact, Harris dominated the 2020 season with 1100 yards and 15 touchdowns in only 10 games. He sees the hole well and hits it as hard as he runs through defenders. The Colts have started to move away from the RB-by-committee approach. They are starting to focus more on Jonathan Taylor, but bringing in Harris as a short-yardage back or even in occasional goal-line situations would be more than ideal.