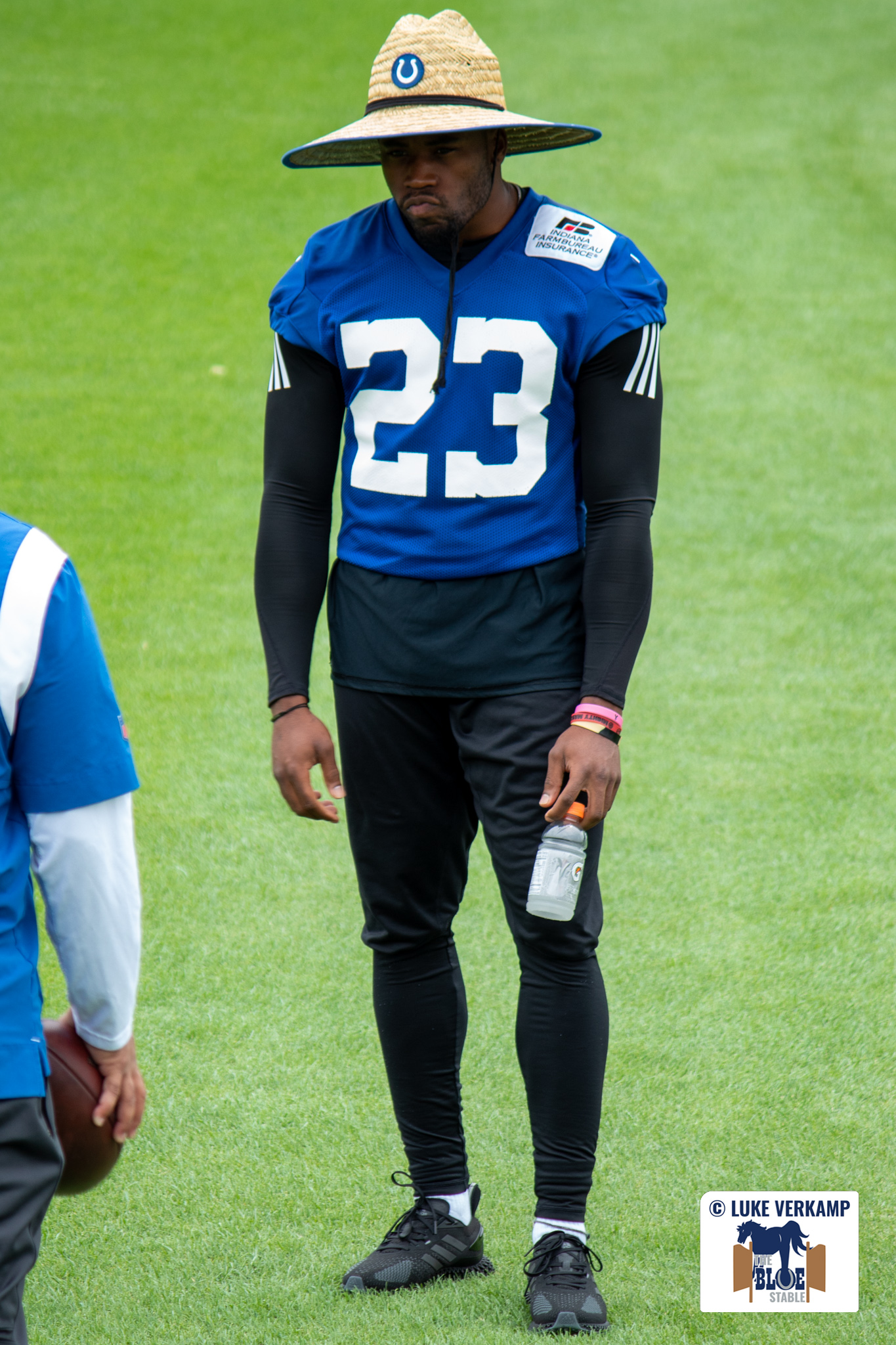 All words that could reflect the current mood around the Colts and the fanbase after the week 8 loss to the Titans. After jumping out to a 14-0 lead thanks to 2 Michael Pittman Jr TDs & a Ryan Tannehill INT, the Colts had a golden opportunity to put the game nearly out of reach. A second Tannehill INT sailed into the arms of DE Tyquan Lewis, who returned it for a good gain. The energy in the stadium was euphoric for that brief moment, but then we saw a large pileup of players where Tyquan was. Replay revealed that he fumbled the football while his knee was down, but he hadn’t been down by contact. There was no clear evidence for who recovered the ball aside from Colts Safety George Odum emerging from the pile with the ball. Yet the refs ruled Titans ball again at around the same spot where they were pre-INT. While the terrible call does not excuse the Colts blown coverage on the next play, that one play represented the turning point in the game that could have swung the game one way or the other. Tragedy also struck on that play, as Tyquan Lewis was carted off with an injury, possibly because of the pileup. The injury might be season-ending, thus potentially ending a solid season from one of the Colts’ best DEs.

Colts and Titans was a close game, but the game did not go the way we expected. Considering the two great runners on both teams, many expected a “run the damn ball” game script from both teams. Derrick Henry entered the game with the most carries in the NFL, Taylor with the 4th most. Derrick Henry did run the ball 28 times to Ryan Tannehill’s 33 passes, a ratio that seemed close in line with their season averages. But Jonathan Taylor had only 16 rushes to Wentz’s 51 passes, a ratio that far exceeded the normal run-pass play script. The Colts’ refusal to run the ball consistently with Taylor was partially due to several big runs of his being called back because of holds on the right side of the offensive line. However, despite that, it was still the Colts’ most consistent offensive weapon. For the day, Jonathan Taylor got 70 yards rushing (4.375 ypc), and 0 TDs on his 16 carries, which was far better than Derrick Henry’s 28 carry, 68 yard (2.429 ypc), & 0 TD game. Injuries played a factor in Henry’s slow day, as he was dealing with an early game foot/ankle injury.

The passing game was the difference-maker in this game beyond the penalties and turnovers. Wentz was inaccurate yesterday after the first two drives were sailing several throws too deep and putting his receivers in some bad positions. Dulin was unable to get a critical 3rd down catch because of a high ball, TY Hilton got injured on a high ball between 2 defenders (which was close to being a defenseless receiver call), and the game-sealing INT to Kevin Byard was a staredown to Michael Pittman Jr despite Taylor wide open in the check down in OT. This game was Wentz’s worst healthy game, throwing 27/51 (52.3% completion %) for 231 yards, 3 TDs, but two costly INTs late. His first INT was also nearly game-ending, but in a way, also game-saving. Backed deep in his own endzone with under 2 minutes left to go in the 4th in a tie game, the Colts needed a FG to win it. However, the Titans brought a ton of pressure, and Wentz threw while in the endzone and being hit by two Titans. The ball was a floater and picked off inside the 5-yard line for a pick 6. Terrible ball, no question, and the most ideally you could have asked for was that he would have thrown an incompletion. However, the worst-case would have been a safety, as while that would have only gotten the Titans 2 pts, the Titans would have gotten the ball back with under 2 minutes and only 2 Colts Timeouts remaining. A single first down would have ended the game in that scenario. The pick was not great, but it wasn’t a game killer thanks to the Colts getting the ball back and tying the game up with a late 4th drive.

I would be remiss if I didn’t talk about the biggest factor in this game for both sides: penalties. The Titans were called for 11 penalties costing them 161 yards (most of them coming from 2 clear pass interference calls, most notably one on the Colts final drive of regulation). The Colts had 9 penalties for 71 penalty yards, several of them negating giant runs from Jonathan Taylor (including a 50 yarder). The aforementioned bizarre fumble recovery also cost the Colts a major momentum shift. I tend not to blame refs for game results, but despite all the calls today, there were several missed calls as well that cost the Colts, such as several holding/DPI calls throughout the game. This was a very undisciplined game for both teams, and the ref’s impact on the game was certainly felt because of it.

Regardless of the Refs, the Colts had opportunities to put the game away. Reich and Wentz deserve some criticism for the lack of involving Taylor as well as the turnovers. The offensive line deserves blame as well for, despite being healthy, lacked the consistency and the coordination to protect Wentz from rushers, particularly in key situations. But the pass defense, in my opinion, deserves the most blame. Run Defense did its job outside perfectly yesterday, so they deserve praise. But beyond the pass protection and the offensive turnovers, the pass Defense failed to put the game away and continuously got beat by AJ Brown. AJ Brown was hyper-targeted this game, with 11 of Tannehill’s 33 throws going to him. Brown rewarded Tannehill with 10 catches, 155 yards, and a 57 yard TD. The Colts coverage of Brown was not strong, as he continuously found the weak spots in the Colts zone heavy scheme and was picking on the Colts secondary all game long. The Colts were able to get pretty consistent interior pressure, but there were too many plays with plenty of time for Tannehill to find an open Brown. The edge rush did have rare flashes, but the young Colts edge rushers failed far too often to beat the Titans Tackles and got bullied at the line on pass downs. Without consistent four-man pressure, the Colts scheme simply doesn’t work, barring turnovers.

I was tempted to give this award to Michael Pittman Jr’s 2 TD game, but it wouldn’t feel right to not give the award to the biggest run stuffer for the Colts after holding the NFL’s leading rusher to under 2.5 ypc on a 28 carry day and keep him scoreless. Finishing with 5 tackles and 4 solos, Stewart was an absolute bully to the Titans interior OL in run plays. Big Grove was the Colts’ most consistent pass rusher as well, getting several key pressures on Tannehill. He also swallowed up several blockers at once, allowing the Colts LBs to penetrate the Titans backfield and stop Henry from building enough steam to wreck the game. Stewart certainly earned his recent contract extension this game and set the tone for the run D today. For his and many other Colts efforts in the run defense, he earns an MVP award for the game. Had the run defense not been so dominant, the Colts could have had a much uglier game.