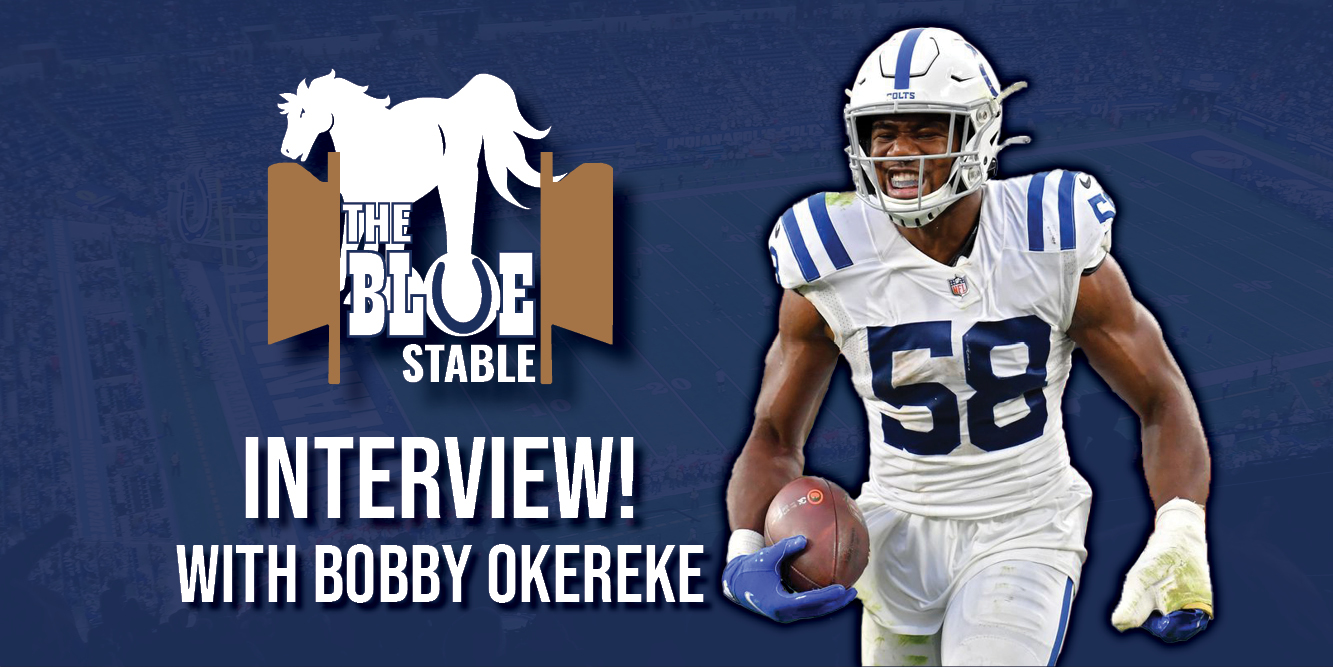 The Colts’ starting middle linebacker set himself lofty goals for next season when he sat down with my Blue Stable colleagues Destin Adams and Michael Pevia for an exclusive interview.

That’s an ambitious goal for any linebacker to set themselves, but it’s particularly challenging when you share a position with Darius Leonard. Whilst Leonard is arguably still underappreciated across the NFL and fails to get the attention he deserves, his consistently high performances and numerous accolades naturally take attention away from teammates.

The 2019 3rd-round pick had the most statistically impressive season of his career last year as he led the team with 108 tackles (66 solo), one sack, defended two passes, and snatched two interceptions. One of those interceptions came in the vital win against the Patriots.

His performance last year was enough to earn him an alternate Pro Bowl nod, but can he go one better this season? A Pro Bowl selection could make all the difference for a player like him entering a contract year.

There are good reasons to believe what was a good Indianapolis defense in 2021 can become one of the best in the league in 2022. One of the reasons why is the talent Chris Ballard has brought in during free agency. Those acquisitions certainly excited Colts fans, but the locker room seems to be just as excited with new teammates like Rodney McCleod.

“He just walks into the building, and he’s got that presence about him. He’s about his business. He’s leading the defensive group, and after practice, walkthroughs, and extra film studies, he has the right approach. He’s the guy who does stuff right, and guys can follow in the locker room.”

Okereke was similarly glowing about Stephon Gilmore: “Just seeing him the way he rolls in practices and OTAs and all that, it’s honestly incredible.” He particularly noted the value of Gilmore and McCleod’s experience and the fact both have won Super Bowls. 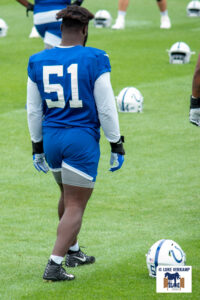 New players, improved performances from second-year players like Kwity Paye, and hopefully a fully healthy Darius Leonard should make the Colts defense meaningfully better in 2022. That should lead to fewer points conceded and more wins for the team whilst giving Okereke more opportunities to bolster his individual stats in areas like sacks and interceptions. This should all strengthen his case to make the Pro Bowl.

The changes to the Colts’ defense certainly haven’t been limited to the players. Defensive Coordinator Matt Eberflus left to be Chicago’s head coach, taking most of his defensive staff with him. That necessitated a lot of new blood within the defensive coaching staff.

That level of change can be daunting to a player, but Okereke is embracing it. “It’s been good. It’s a humbling experience; you come in and have to learn a new defense. It’s like you’re a rookie again.” 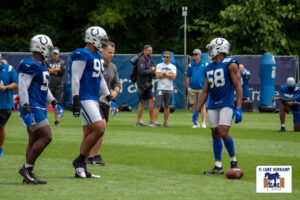 Colts linebackers may only be getting their first experience of working with LB Coach Richard Smith, but Smith appears to be making a good impression:

“Coach Smith, [I] can’t speak highly enough of him. He’s just on you in every aspect of fundamentals to technique. He’s going to coach every play and hold you to your highest standard.

“These first two weeks of OTAs have been good. Getting used to the system, playing in space. Coach Smith is a demon for the details. He’s really not going to let a mistake slip by. That’s what you want when you’re trying to be a great player and trying to chase greatness. You want a coach that’s going to hold you accountable.“

There was also a lot of love for Assistant Coach Cato June and, in particular, June’s experience of playing a different LB role at a high level. “We’re playing different positions, so I’m asking him stuff he saw at WILL [linebacker] and different things he keyed in at. It’s definitely a benefit to have a guy who was as productive as he was in his playing career.”

One thing that should help the 25-year-old adapt to the many changes this season is his IQ.

“That’s been one of my strong suits, honestly, just being able to learn defenses fast, pick up information quickly, diagnose on the field.” Warning of the dangers of overthinking, he stressed the importance of anticipating plays pre-snap and then playing freely. 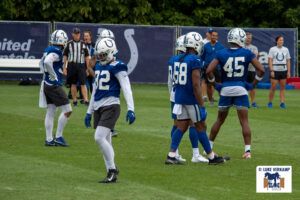 Last year, Okereke clarified the correct pronunciation of his name. He spoke about being a first-generation Nigerian immigrant, with his parents feeling they had to accept the way their name was pronounced. But, with his name increasingly being spoken on TV, Okereke decided he wanted the world to get it right. “I just wanted to … have people who are Nigerian or have my last name or have seen my last name feel prideful … that it’s being said the right way.”

The man who did more than anyone to get people to mispronounce Okereke’s name is probably Pat McAfee, thanks to the iconic way McAfee announced Okereke’s selection in the 2019 draft. Not that he has any hard feelings towards McAfee about the way he was ushered into the NFL. “It was just incredible. It’s so cool for me just to be replay it, see it on YouTube, social media, whatever. I think I couldn’t have had a better draft announcement.”

I was LITERALLY told that was how you say his name on draft night.. I'm not happy abaht mispronouncing his name

As he looks ahead to his fourth year in the NFL, ‘Bobby #58’ is looking to be one of the best linebackers in the NFL. He has the opportunity to secure himself a lucrative long-term contract in Indianapolis with a team that knows it has to achieve more when it matters in 2022.

The introduction of Matt Ryan should help with that, but the Colts defense knows it must be better at the business end of games.

“What can I do better to close out games? Whether it’s better conditioning, better details, red zone defense, two-minute, whatever. I think everybody just looks and figures out their individual responsibility and what they have to do to get better. And you know, that’s when collectively, as a group, we’ll go and grow.”

How good can the Colts be in 2022? Clearly, this is a team that has high expectations for itself. “Obviously, team goals come first. Conference championship, division championship, and ultimately Super Bowl.”

Chris Ballard has given Colts fans plenty of reasons to be optimistic heading into the 2022 season, but hope is no longer enough. Indianapolis must start realising its potential, winning the AFC South and winning playoff games. If Okereke can realise his personal ambition of becoming an All-Pro, those team goals will be significantly easier to achieve.

How good do you think Okereke can be this season? How much will he benefit from playing alongside Ngakoue and Gilmore? Let us know at @TheBlue_Stable and @BenchSebastian