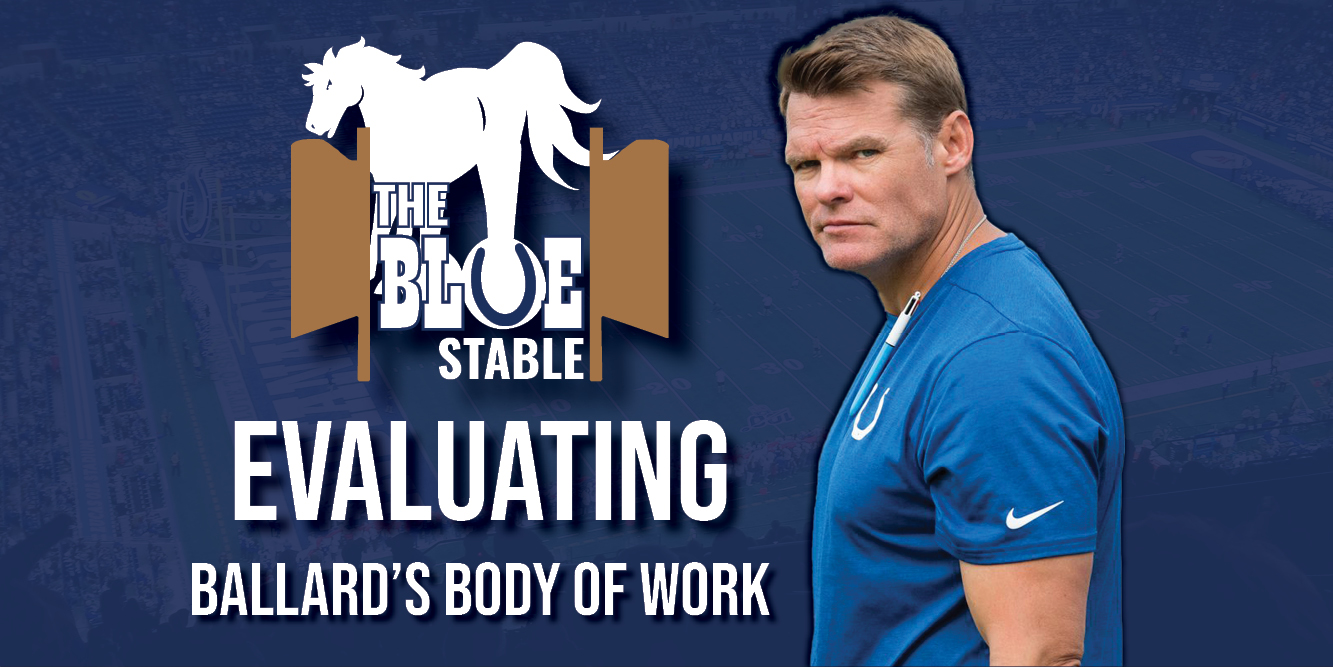 When Chris Ballard opened the doors of the Indiana Farm Bureau Football Center for the first time in February 2017, he was inheriting a roster that had just finished a disappointing 8-8 and missed the playoffs. With a decrepit roster that was bereft of talent, Ballard surely envisioned rebuilding the roster to his own liking around focal point of the franchise, quarterback Andrew Luck.

Luck was coming off another stellar year that fans would later learn was hampered by injury, evidenced by the offseason surgery on his throwing shoulder. Luck’s main targets that year would still be familiar to Colts fans if they just started watching the team last year in TY Hilton and Jack Doyle, followed by one of Ryan Grigson’s famed first-round picks, Phillip Dorsett. The ground attack that year was led by 33-year-old Frank Gore, who managed to surpass 1,000 yards despite a run-of-the-mill 3.9 yards per attempt. The next leading rusher? Andrew Luck.

Embed from Getty Images
As I have begun to peel back the layers of the veil from this very painful, very forgettable season in Indianapolis Colts’ history, I can’t help but think this was the beginning of the end of the Andrew Luck era. The former Colts quarterback was sacked 41 times over the course of the 2016 season, a solemn reminder of the failure of Ryan Grigson to put a competent offensive line in front of Luck.

Chris Ballard, quite possibly because of the lack of protection he saw Andrew Luck afforded, has, in turn, drafted and developed one of the best 5 man groups in the league over the last 3 years. Ballard’s philosophy always has harkened back to the idea that an NFL team must be built through the trenches.

The weaknesses of Ryan Grigson’s teams were turned into strengths by Chris Ballard in a shockingly short amount of time. However one could argue that the strengths of Grigson’s teams (playmakers, and franchise quarterback), are what the Colts have been missing during the Ballard era.

The Ballard tenure while more widely lauded by most media and fans hasn’t been without critique. It is a fact that the Colts haven’t made it to the AFC Championship game under Ballard’s watch as they did with Ryan Grigson. One could argue this was the product of a generational talent at quarterback that carried a mostly deadweight team to that game, and you would probably be right, but the fact still remains.

I for one have always been a proponent of trusting Ballard, especially when it comes to talent evaluation. The core of a Chris Ballard team always has been and always will be built through the draft. The reason the Colts have one of the deepest rosters on paper is because of Ballard’s unbelievable ability to not only identify talent but also mesh team culture with that player as a person to bring out the best in them.

Part of this series will be focused on reviewing Chris Ballard’s draft classes, free agency signings, trades, and whether or not roster deficiencies that he could have addressed are mainly to blame for the overall lack of team success relative to expectation during his time as general manager.

The best way to begin this series was by going over where the Colts were at when Chris Ballard came into the picture. That establishes a baseline for how far Ballard has brought the team since Ryan Grigson.

General managers constantly face forks in the road with every major decision they make during the team-building process. The results from these choices are what ultimately define a GM’s legacy on a team, if he has one at all.

For example Ryan Grigson utilized free agency more frequently than Chris Ballard has. When there is little activity going on during the first few weeks of the new league year, fans quickly get agitated. Lest we forget the large paydays Grigson handed out to players who would largely underperform their deals.

Paying old veterans to make up the bulk of your roster was a strategy that did not set up the Colts for future success, and is what led to the complete dismantling of the roster that Chris Ballard began in 2017. It wasn’t easy to cut four starters from the previous season right when he entered the fold, not resigning leaders like Mike Adams and D’Qwell Jackson, yet that is the route that Ballard took. It led to seventeen losses in his first twenty-two games as GM, but Ballard, ever steady, stayed the course.

The type of analysis I’ll be drawing in this series will try to be as objective as possible without the benefit of hindsight. For instance, when approaching questions such as “Why did Ballard decide to draft Paris Campbell when DK Metcalf was still available?”

I’ll look at the roster, as well as the general consensus thoughts on the prospects themselves at the time to determine whether or not it made more sense to draft Campbell. What free agency moves would have helped the Colts the way their roster was constructed three years ago, and who was Chris Ballard shrewd to stay away from that others were clamoring for him to sign?

We’ll be rehashing each fork in the road so to speak that Chris Ballard has come to during his time with the Colts, and then following the dominos that fell because of that decision in a classic choose your own adventure style over the coming weeks.

If you would have made a different decision than Chris Ballard, where would the Colts be at today because of it? Follow all of the rabbit holes, or just the most realistic ones. Either way, it should be a wild ride.