Breaking Down the Numbers: Alec Pierce’s Impact on the Colts’ Aerial Attack

Home » Breaking Down the Numbers: Alec Pierce’s Impact on the Colts’ Aerial Attack

Alec Pierce was approaching eight years old when the Atlanta Falcons drafted quarterback Matt Ryan. Now, the two join the Indianapolis Colts as teammates with a mission to elevate the offense.

Ryan is on the tail end of his career, but the numbers show he can provide efficiency to the offense. However, the depth of his pass attempts saw a sharp decline in the 2021 season compared to 2020.

The Colts drafted Pierce for his elite athleticism and threatening presence down the field. With the absence of T.Y. Hilton and Zach Pascal, the Colts hope Pierce can fill the gap at WR2.

I took a closer look at how the addition of Pierce could rejuvenate Ryan’s passing numbers and maximize the Colts’ offense. By referencing previous statistics, I was able to estimate the duo’s potential for the upcoming season.

Getting Familiar with aDOT and IAY/PA:

The two statistics I focused on to determine the potential of the Ryan-to-Pierce connection are aDOT and IAY/PA.

aDOT is defined by Sports Reference as the “average depth of target when targeted, whether completed or not.” Pass catchers are assigned this stat to help fans understand their role on the offense.

Estimating Pierce’s aDOT and Ryan’s IAY/PA helps create context behind how aggressive the Colts’ new offense will be compared to previous years.

Ryan will enter the 2022 season as the Colts’ sixth starting quarterback since 2017. Head Coach Frank Reich has adjusted to a variety of quarterbacking styles. Because of this, I had to find a predictable middle ground for Ryan’s statistics. 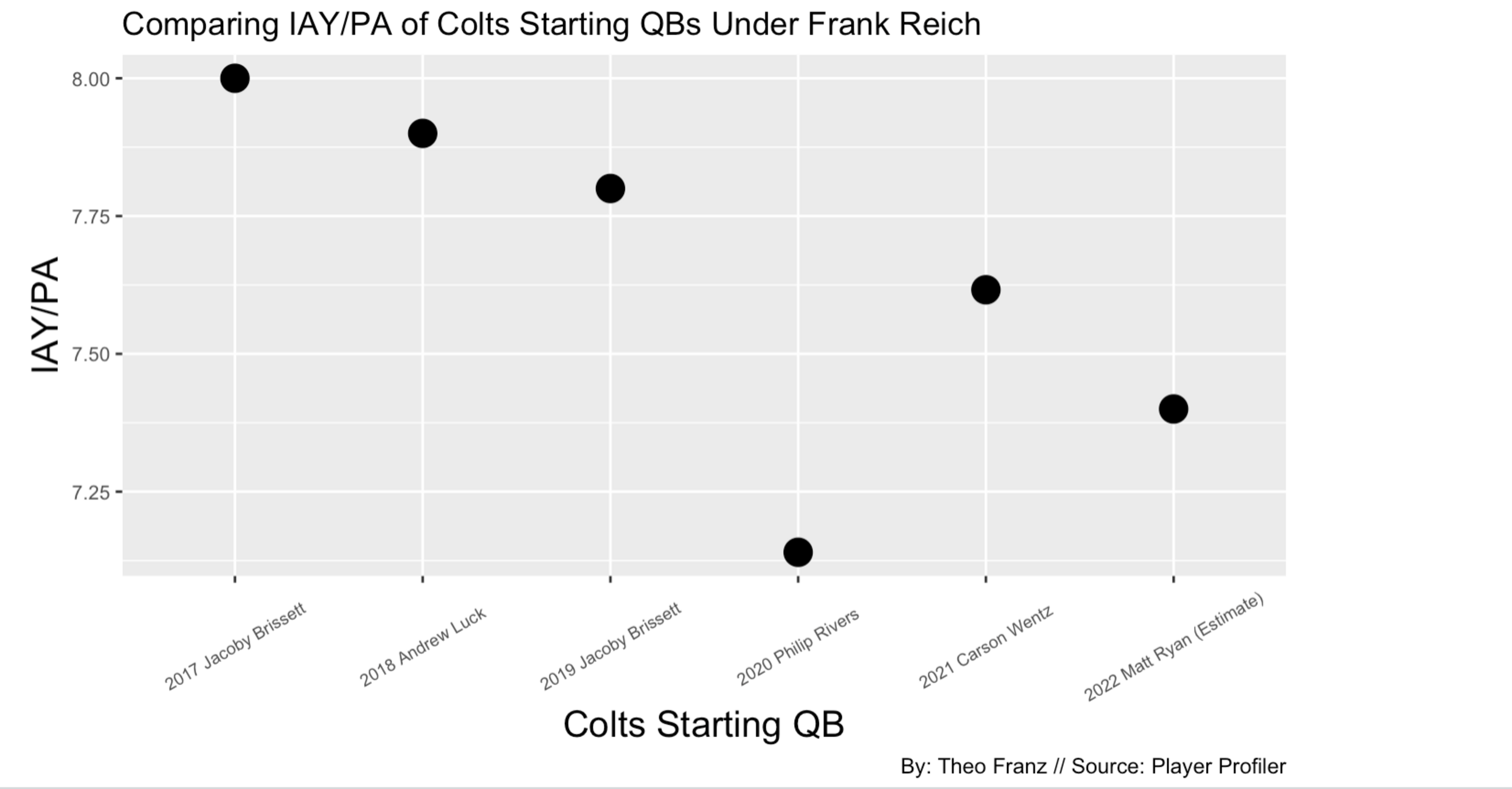 With this information, we can assume Ryan’s total season statistics will be an average of those numbers at 557 attempts and a 7.4 IAY/PA. That is 41 more passes and 0.2 less intended air yards per pass attempt than Colts fans are used to seeing.

These two statistics are important for calculating Pierce’s potential volume. To calculate his potential opportunities, I resorted to adjusting Hilton and Pascal’s abandoned targets.

After the 2021 season, the Colts lost wide receivers Hilton and Pascal (Hilton remains a free agent when writing this article). Together, they functioned in tandem as the team’s WR2. 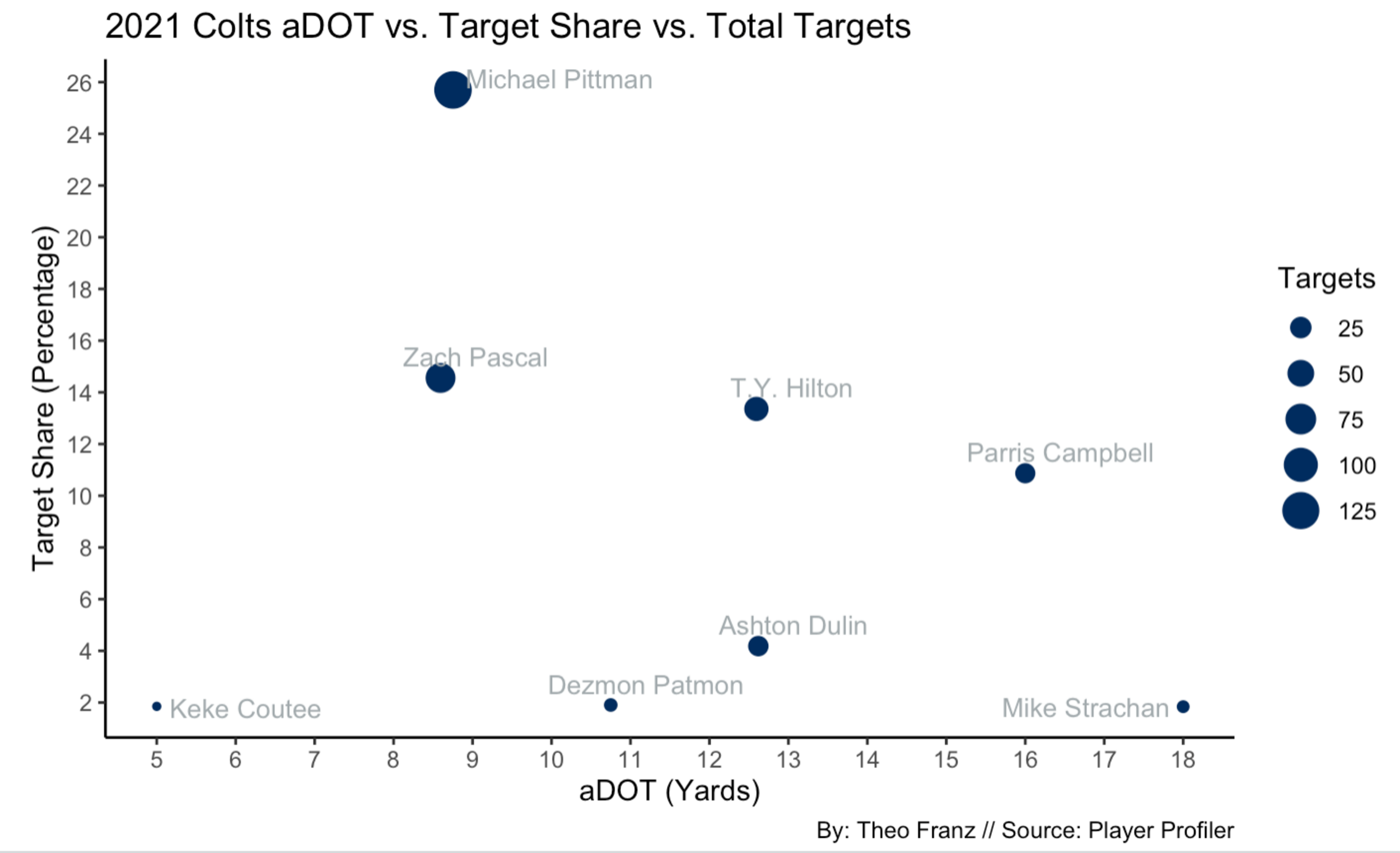 The departure of the wide receivers freed up 28% of the team’s target shares and 106 targets, but there is one problem: these numbers are with Wentz at quarterback.

To make a more accurate projection for Pierce, I adjusted Hilton and Pascal’s total target statistics as if Ryan was at quarterback and divided their total target shares amongst the Colts’ pass catchers. I don’t expect Pierce to grab a Justin Jefferson-sized portion of target shares, but whatever is left will be significant enough for Pierce to take over the title as the WR2.

Historically, second-round WRs in their rookie season have seen a decrease of 9.9 percentage points from their collegiate target shares since 2018. Pierce saw a 21.3% target share in his final season at the University of Cincinnati. This leaves him with an estimated rookie target share of 11.4%. However, after allocating Hilton and Pascal’s vacated target shares, I estimate that his share will increase to 17.9%. That percentage across a 17-game season would give Pierce approximately 99 targets. 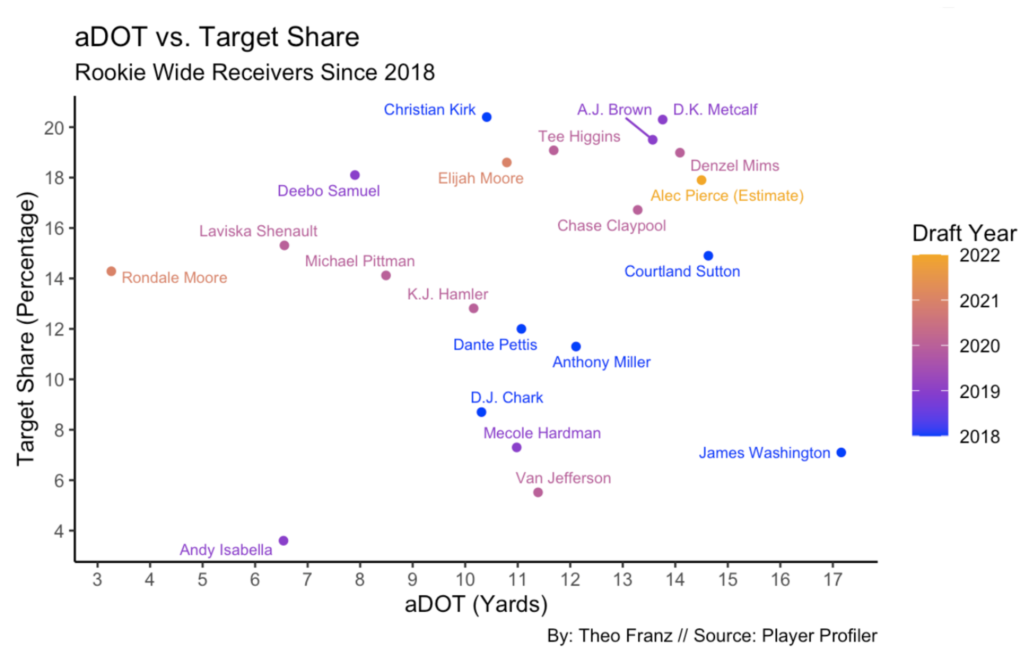 Looking at the graph, Pierce’s estimates would fall into an elite group of second-round wide receivers. This placement seems realistic given his situation and play-style are similar to D.K. Metcalf and Courtland Sutton.

Pierce made his name known through his deep route running capabilities. In fact, his 17.1 aDOT was amongst the best in college football.

Pierce’s chances at sustaining his 17.1 aDOT in the NFL is unlikely. The previously mentioned group of second-round WRs saw an average loss of 2.6 yards in their aDOT compared to their final season in college. So by grouping Pierce with the average, his aDOT falls to 14.5.

Multiplying Pierce’s 14.5 aDOT by his 99 targets would give him 1,435 air yards. That is 283 more than the combination of Hilton and Pascal’s adjusted air yards with Ryan.

The Ryan-to-Pierce connection could create a 35.5% increase in air yardage compared to last season’s connection of Wentz to Hilton and Pascal. Colts fans could also see the ball travel 464 more yards through the air.

The effect of Pierce’s presence would also be seen in Ryan’s stats. Ryan’s assumed IAY/PA would jump from 7.4 to 7.9. It’s ever-so-slightly above the historical average under coach Reich, but it also shows that replacing Hilton and Pascal with Pierce’s deep threat abilities adds half a yard per throw.

Looking Into Next Season:

These projections were created in thought of all things being equal. Without any other major changes, I expect the offensive line play and Ryan’s arm strength to remain consistent.

My projections also depend on the emergence of a pass catcher from the current roster. This pass catcher would be taking on the team’s third highest target share percentage. Possible candidates for this role include Parris Campbell, Mo Alie-Cox, and Nyheim Hines. 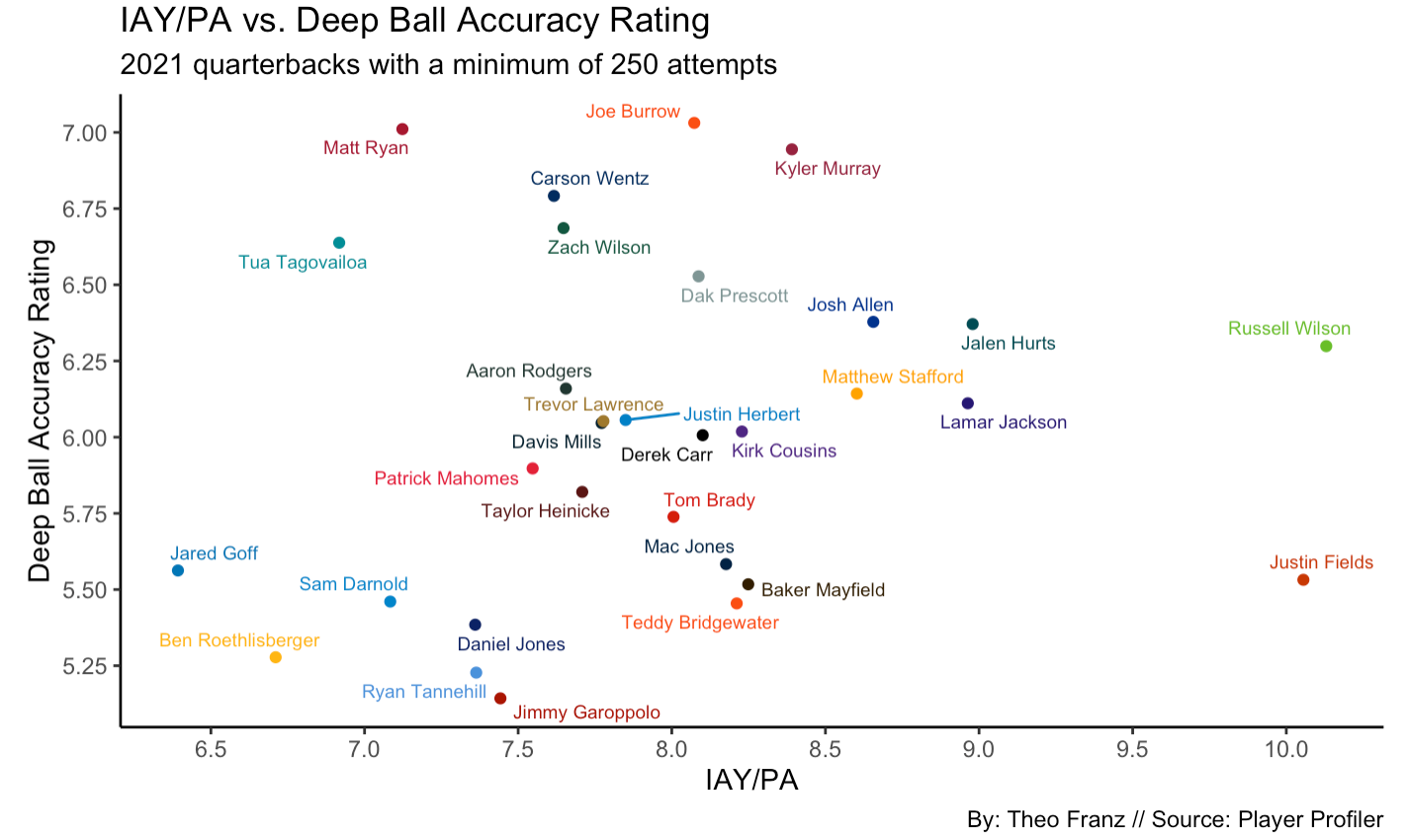 Last season, Ryan’s IAY/PA and deep ball rating was closely comparable to Tua Tagovailoa. Based on my projections, Ryan will leave the grouping of mid-tier quarterbacks and begin to border the outside of the top 10.

There is a common analytical theory that deeper passes will result in greater odds of scoring. The addition of Pierce’s talents will surely test this theory’s limits, but it is without a doubt that his presence will create a more aggressive yet potent aerial attack for the Colts.

Numbers tell us the athleticism and play-style Pierce brings to the Colts can convert Hilton and Pascal’s vacant targets into deeper passes. The volume and accuracy of Ryan’s passes improve the offense’s efficiency. In turn, the duo is set to outproduce their predecessors.