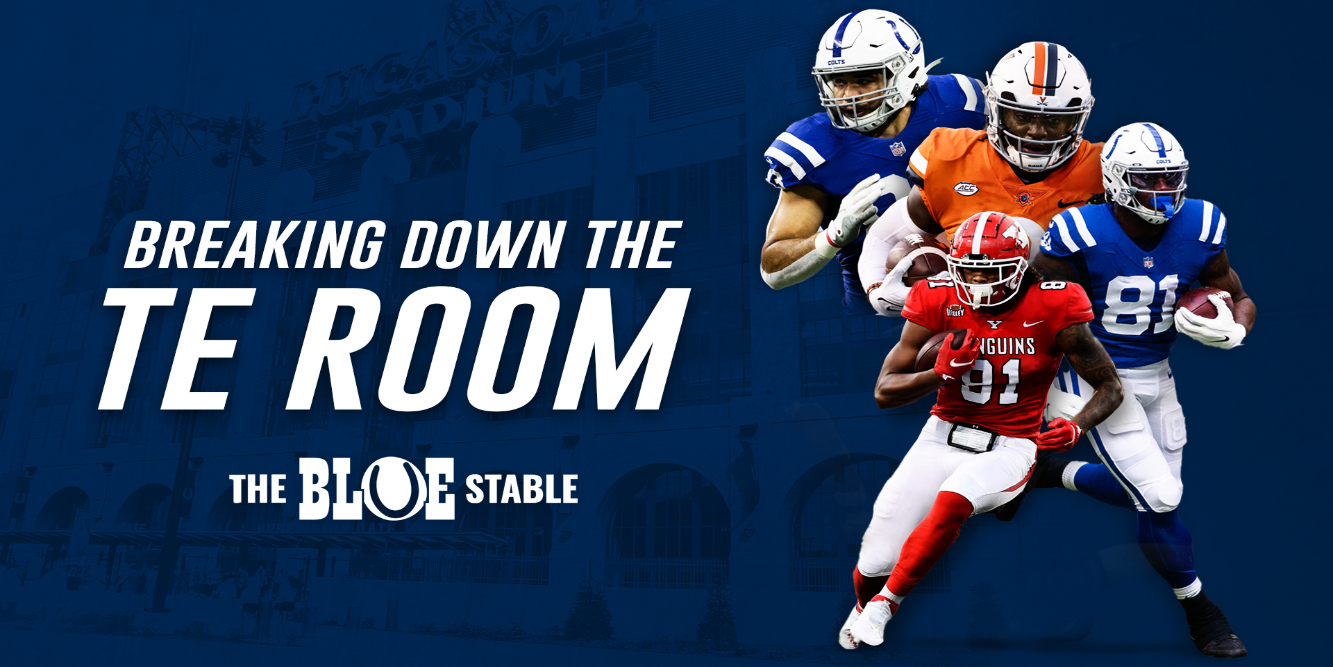 A Peek Into The Colts’ Tight End Room

The Indianapolis Colts enter 2022 with one of, if not, the biggest tight end rooms in franchise history.

Mo Alie-Cox stands at 6’5 and leads the way as the team’s TE1. Sophomore tight end Kylen Granson is the smallest of the group (6’2) but has shown great potential to grow as a player in Frank Reich’s offense. And after Jack Doyle’s retirement, the Colts drafted Jelani Woods (6’7) and Andrew Ogletree (6’5) in hopes of reviving the team’s tight end production.

On top of this being Reich’s most physically gifted group, all four tight ends have the potential to become an every-down pass catcher. The immense flexibility in the position grants him the depth needed to maintain a persistent threat of a receiving mismatch.

Many offensive-minded coaches follow the popular trend of operating heavily around a U-tight end. A U-tight end is a tight end who acts as another wide receiver on the field and blocks on occasions.

After his time in Philadelphia, Reich has strayed away from utilizing a U-tight end under high volume. This may be because the Colts have been unable to acquire a tight end who could take on that role, or Reich decided he’s more confident coaching his current system of operation. Either way, it would be disadvantageous to limit tight ends of that size strictly to the passing game.

Reich’s system blends the roles of a U-tight end and a Y-tight end (a traditionally blocking-heavy position), creating a hybrid role. The hybrid role is a perfect mesh for bigger tight ends that can provide their size on the offensive line and create mismatches on the receiving end.

Over the past couple of seasons, the TE1 and TE2 have both played a hybrid role in Reich’s offense while the TE3 plays the U role.

The graph’s biggest statistical differences are found under the “% of Passing Snaps Spent Wideout” and “Routes Ran” categories. The differences show that although Granson didn’t receive the same volume as Doyle or Alie-Cox, he was more likely to line up as a receiver during pass plays. Similar differences can be seen with Trey Burton on the Colts in 2020.

Doyle’s retirement changed the Colts’ future at tight end. His departure leaves 643 snaps on the table for younger tight ends to take. It’ll be up to Granson or Woods to battle it out and take a majority of the volume to become the team’s TE2.

One of the most interesting things to figure out about this #Colts offense is how Frank is going to distribute Jack Doyle’s 643 snaps he had last year..Multiple guys with different skill sets for him to get creative with.

Granson has experience as a pass-catcher, but the run-blocking volume may be too demanding for a former U-tight end. He was graded as a below-average blocker and will have to depend on experience over size to win reps.

Woods has the hybrid frame required for Reich’s TE2 role. He had a solid receiving profile out of college, but his tape shows weaknesses in his blocking techniques, limiting him to a U-tight end status.

I’m more confident in seeing an improvement in Granson’s blocking than Woods’, yet I would not be surprised to see Woods reach his ceiling faster than expected.

With the pros and cons offsetting each other, I see two possible scenarios playing out during the season:

The first scenario is realistic compared to historical circumstances under Reich. This will allow Granson to prove his worth in a next-man-up-type situation and grant time for Woods to develop a routine in the system.

The second scenario is sporadic from previous situations. It would require Alie-Cox to take on more snaps to compensate for Woods’ inefficiencies, eliminating the current system structure and replacing it with a scheme friendlier to U-tight ends.

Whichever tight end they may choose, it can be expected that both scenarios involve delegating a greater portion of target shares to the tight end group. 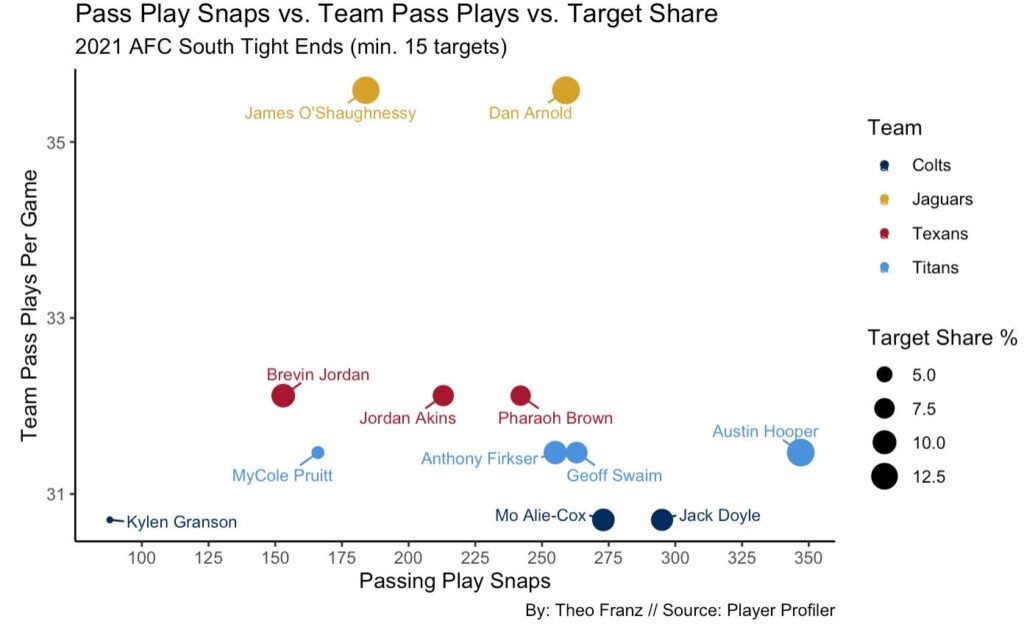 If the last two drafts told us anything, it’s that the Colts recognized they were in a tight end production drought. Many assume Reich loves his tight ends on account of the praises he sings of their importance in his offense, but recent years say otherwise. For the past three seasons, no Colts tight end has reached 60 total targets or 400 receiving yards.

Last season, the average NFL team ran out of a multiple tight end personnel 319.6 times and targeted the tight end out of said personnel 13.1% of the time. The Colts were below average in both categories at 306 and 10.5%, respectively.

The implication of having two u-tight end dominant players fighting for the TE2 spot could cause Reich to increase the rate at which he calls passing plays with multiple tight ends on the field, subsequently increasing the position’s overall production. If this rate reaches anywhere above league average, it is possible that the Colts could have two tight ends reach either 60 targets or 400 receiving yards.

This rationale does have its flaws: it does not regard where the tight end is lined up on the field nor the likelihood of an opportunity being turned into a reception. For example, Granson, who lined up off of the line of scrimmage 64.8% of the time, is more likely to run a route on a passing play due to his location on the field than Doyle, who spent 47.2% of his snaps off the line of scrimmage.

Alie-Cox will remain in his hybrid role as the Colts’ new TE1. His receiving duties on offense may see their first decline in his career despite the estimated increase in snaps, but he’s expected to lead all tight ends on the Colts in receiving yards and targets.

Granson and Woods’ contribution to the offense will be through pass-catching production. The competition between the two throughout training camp next month is anticipated to be the closest position battle among the entire roster.

Previously in Reich’s offense, players in the TE2 spot played a hybrid role. However, Granson and Woods’ play style could change that

Both have the capability of changing Reich’s tight end system to one that makes the U-tight end an equal to the hybrid role. Their background as receivers will heavily influence where Reich positions them on passing downs. Placing them in the slot or wideout to run routes seems most efficient to their game since both are underdeveloped as blockers.

As to who will win the TE2 position, Granson’s seniority over Woods can only go as far as his ability to block; a seeable improvement will surely help his case in becoming the TE2. but his size does not bode well for inline blocking, and he has seen more success lined up as a receiver on the outside.

Right now, Woods looks to be the most appealing option as the Colts’ next TE2. Reich doesn’t go out of his way to persuade the front office to bring in exceptional athletes just to have them collect dust on the bottom of the depth chart. Woods’ hybrid build is of similar makeup to Alie-Cox, and he is versatile enough to use his athleticism to his advantage on or off the line of scrimmage.

Regardless of who wins the TE2 spot, Reich has sizable options at his disposal. The group’s talents are interchangeable across multiple tight end formations, allowing greater freedom of play calling. We may see personnel as simple as Alie-Cox on the line, run blocking, or as creative as a two tight end twin set of Granson lined up wideout and Woods in the slot.

Reich has a brilliant sense of exploiting an opponent’s weaknesses through maximizing a player’s skill set. Once the tight ends develop into all-around players, the group will achieve complete flexibility across the offense, creating nightmarish matchups against defenders.