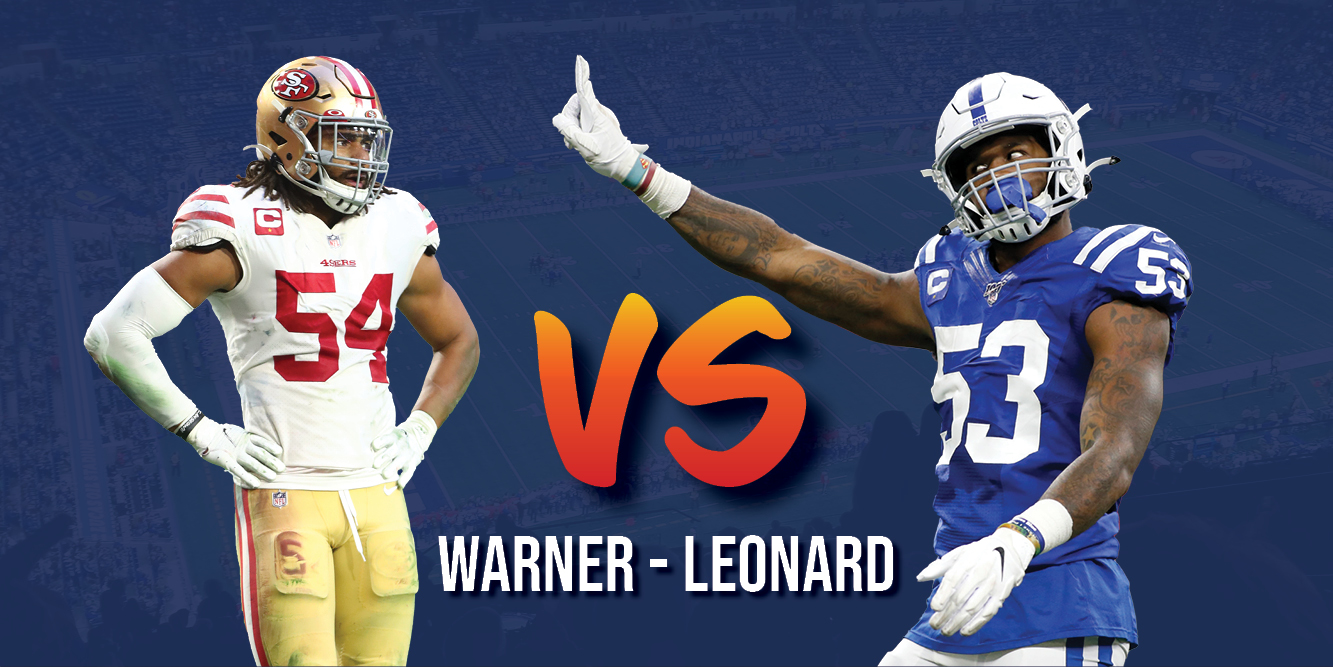 The Battle for the Best ‘Backer: Darius Leonard vs Fred Warner

Home » The Battle for the Best ‘Backer: Darius Leonard vs Fred Warner

In March 2018, the NFL world was in the middle of NFL Draft scouting season. I, in particular, was transfixed by a special linebacker draft class filled with exciting prospects. One of my favorites outside of round 1 players was a lengthy LB from a non-Power 5 school. He was a bit slimmer than traditional LBs but had incredible athleticism to make up for it.

Chris Ballard pointed out LB Darius Leonard vs. Clemson (2016) as one of the games that caught his attention. Here are some highlights.

Finished the game with 19 tackles. pic.twitter.com/gX4DbueJI4

When the 2nd round came, I was giddy with excitement at the possibility of him becoming a Colt. Then Joseph Addai came on the stage and uttered words I would never forget:

And my heart at the time sunk. I thought for sure the Colts were going to get my guy Fred Warner. I liked Leonard as a prospect in the 3rd (as it was a challenge for me to find his film at the time, but I liked what I heard from scouts I trusted), but the 2nd felt early. After watching Warner’s tape, pre-draft workouts, athletic testing, and learning about him as a person, I was really sold on him as a Colt. After all, I wasn’t yet comfortable with Anthony Walker as a starting MIKE LB at the time. Fred Warner later went to the 49ers in the 3rd, and I wished him the best of luck in his NFL future.

Embed from Getty Images
However, since that 2018 Draft, I, like many others, have been proven wrong by Darius Leonard. From being considered a reach or even “The Worst Pick in the Draft” by some, to becoming a perennial All-Pro, the doubters have been silenced. In fact, according to a recent ESPN poll of NFL GM’s and executives, there is no better off-ball LB in the NFL right now.

However, there is still a debate on who is the best off-ball LB in the NFL. Some would say it’s Bobby Wagner based on his lengthy career performance (while ignoring a recent regression). Some would crown Micah Parsons after his sensational rookie year (even if he is more of a hybrid EDGE pass rusher than a pure off-ball LB).

ESPN polled executives, players and coaches and on the best off-ball linebackers in the NFL:

But there is one LB who has drawn the most frequent comparisons to Darius Leonard for the title of best off-ball LB in the NFL: Fred Warner.

The former BYU Cougar and fellow 2018 draft mate of Leonard’s has turned into one of the NFL’s best players. A leader of a perennially strong defense, Warner has drawn praise from both the data analytical and film-watching NFL communities for his coverage skills and intellect enhanced by incredible athleticism. Even a certain video game that I refuse to give free publicity to rates Warner as the top LB in the NFL.

The discussion on LB hierarchy has intensified in recent weeks, so let’s dive in:

Who is the Best ‘Backer in the NFL: Fred Warner or Darius Leonard? 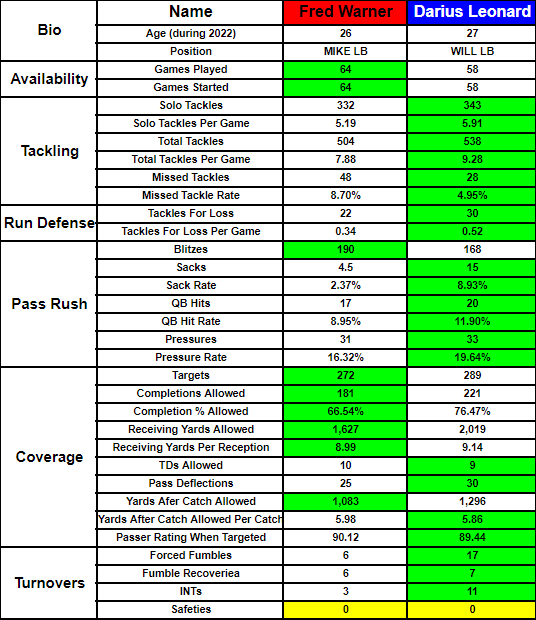 Embed from Getty Images
The best ability is availability. A player contributes little to nothing to his team if he can’t play. In a high-contact, physical sport like football, health is paramount to having an effective career.

This is one area in which Leonard has struggled each year in his career. The Maniac has yet to play a full season healthy, missing 1-3 games each year. While he has yet to land on season-ending IR in a season, he has suffered various injuries throughout his NFL career that have cost him playing time.

Embed from Getty Images
On the other hand, Fred Warner has only missed one game in his entire career. Each season he has played in 16 games (missing one game in the expanded 2021 schedule). With Warner being slightly younger and having to deal with far fewer injuries in his career thus far, his longevity could be increased compared to Darius Leonard’s.
Embed from Getty Images

Embed from Getty Images
A fundamental skill for any defender, the ability to tackle, is especially vital for any assignment a linebacker is tasked with. Whether it is wrapping up an RB on the ground, making an open field tackle on a receiver in the passing game, or bringing down a passer, you have to tackle.

Both Warner and Leonard have a knack for flying to the football, but in this comparison, it is clear who has the edge. Both per game and cumulatively, Leonard racks up more total and solo tackles than Warner. On top of that, he has 20 fewer missed tackles than Warner, demonstrating a superior ability to wrap up ball carriers.

Embed from Getty Images
Warner is no slouch in tackling (though his miss tackle rate is higher than the average starting NFL LB); Leonard is absolutely elite in this regard. Ranking 3rd in Solo Tackles and 2nd in Total Tackles in the NFL since entering the NFL despite playing only 58 games, Darius Leonard is a tackling machine. Fred Warner ranks just behind him, 4th and 5th respectively, in those tackling stats.

Knifing through blockers and delivering a tackle for no gain or a loss is a strong skill for an LB. It displays instincts, football intelligence, the speed to get through the hole quickly, and the strength to shed blockers if need be.

Only NFL Linebackers with 90+ run defense grades this season

Darius Leonard again ranks 6th since entering the league in TFL despite fewer games played than those ahead of him. His 30 TFLs exceed Warner’s 22, and the gap further widens when factoring in per game rate. When it comes to taking away the ground game, Leonard does it better.

Fred Warner has not been known as a noted blitzer on passing downs to the casual fan. His 4.5 career sacks are alright but unremarkable of a total. However, he achieved this total in 22 more career blitzes than Darius Leonard did to get his 15 career sacks.

Embed from Getty Images
With a 10.5 sack gap, it’s easy to see Leonard has the edge in blitzing success. His career sack rate is nearly equal to Warner’s career QB Hit Rate. While Warner does close the gap a bit in pressures, Leonard still has more on fewer blitzes. When it comes to rushing the quarterback, The Maniac wins in a decisive fashion.

In our most competitive category yet, pass coverage needs a nuanced look. Fred Warner has a clear advantage in several key stats. Warner has 17 fewer targets, 40 fewer completions, ~10% less completion % allowed, and 400 fewer yards allowed in coverage (0.15 fewer yards per target allowed). Fred Warner has been typically used in a more man coverage-heavy fashion, lining up against RBs, slot WRs, and TEs.

Embed from Getty Images
With these 1-on-1 assignments, Warner is left on more of an island against his opposing receiver. He is tasked to follow him rather than keep his eyes on the quarterback. The former Cougar is instructed to make a play on a ball once a receiver makes a move for the football rather than reading a QB’s eyes. This tends to lead to tighter coverage with more chances to disrupt a catch. Fred Warner has developed into one of the better man coverage linebackers in football, being a valuable chess piece for the 49ers in this role.

Meanwhile, Darius Leonard has the advantage in fewer TDs allowed, more pass deflections, more interceptions, and fewer yards after catch per reception. He has been deployed in a more zone-heavy scheme over his four-year career. This has an emphasis on dropping into your area of the field, reading the quarterback’s eyes on where he is targeting, and then reacting accordingly to make a play on the ball or limit a receiver after the catch. As a result, Leonard has become one of the better zone coverage linebackers in football, making tons of plays on the ball.

Embed from Getty Images
In this section, it is more up to personal preference and scheme. However, Warner’s adeptness in both man and zone lead him to have a more consistent impact than Leonard overall. While Leonard does shine in his scheme, in others, he might not have the same level of impact. Meanwhile, Warner’s coverage skills are employed more broadly.

Embed from Getty Images
Darius Leonard wins the turnover battle. Not just vs. Fred Warner, but vs. every single individual defensive player since he entered the league. In 2021 especially, Darius Leonard caused more turnovers on his own than an entire NFL franchise.
Embed from Getty Images
Fred Warner, on the other hand, is more in line with the average starting NFL linebacker. With 11 fewer fumbles forced, one less fumble recovered, and eight fewer INTs caught, Fred Warner falls behind Leonard in giving his offense the ball back. Warner specializes in more consistent and matchup-based advantage in coverage rather than focusing on creating game-changing plays. Both are high-impact LBs.

Goes as a stat against Winston, but this is just a hat tip to a great LB making a great play.

But in causing havoc to end opposing offenses’ possessions, no one is comparable to Leonard. He can jump routes to snag the ball from outstretched targets. Or he can Peanut Punch the ball straight out of a ball carrier’s grasp. Either way, beware.

Darius ultimately has been able to make a bigger splash in more facets of the game. If asked who will have the better career, the case can be made for Fred Warner. He is younger and has been healthier thus far, giving him a potentially longer career. His coverage skills are more scheme diverse as well.

However, when talking about who is the best off-ball LB over the last four years, the answer is Darius Leonard. Combining efficient tackling, elite run stuffing, strong blitzing, opportunistic coverage, and game-changing impact, you get a true Maniac on Defense.

Mr. Highflyer himself still has a big chip on his shoulder, but as long as he is healthy, he will push himself to prove any and all doubters wrong.

So while I believe Darius Leonard is the best off-ball LB in the game, I encourage you to doubt him. Continue to rank him outside the top four LBs in your video games. Proceed to keep him lower on your NFL Top 100/50 player lists. Keep saying he isn’t better than some brand new big market LB/EDGE. Heck, don’t even rank him above a fellow 2018 draft mate…

Because if you continue to do so, you are just going to add more fuel to Darius Leonard’s fire.