The Colts Roster has been assembled. Trades have occurred, free agents have been signed, and rookies have been drafted. Now that we have a very strong sense of the Colts roster, we can finally project how it will produce in 2022. We continue this series with: the Colts’ Rushing Projections.

The Colts are coming off their greatest rushing season in the last 15+ years. Jonathan Taylor went from being an upstart rookie with a very strong finish to his first season to the best RB in football last year. His rushing production for 2021 was unparalleled, with a high volume carry rate and remarkable efficiency. Using elite speed, acceleration, agility, vision (which has come a long way since his struggles early in his 2020 rookie season), and strength, Taylor was an absolute beast of a back. In fact, it was an even better performance than Derrick Henry’s vaunted 2020 season in several statistical categories on the ground:

The Colts also boasted Nyheim Hines as a strong backup to Taylor, albeit in a smaller role than usual due to JT’s breakout. Hines had his most efficient year in the ground with 4.9 yards per carry, a remarkable improvement from his previous high of 4.3.

Said teammate Nyheim Hines: “JT is sending a message to the rest of the league … JT just wants to run the damn ball.” pic.twitter.com/1X3TgGLks4

However, behind the dynamic duo of Taylor and Hines, there have been some changes. Marlon Mack & Jordan Wilkins have each signed elsewhere, and 2021 undrafted free agent Deon Jackson saw very limited time, most notably at the end of the matchup in Houston vs. the Texans in garbage time. Jackson is getting some competition after the 2022 draft, as two new 2022 UDFAs have arrived in Indy: Florida International’s D’Vonte Price, Oregon’s CJ Verdell, & Washington State’s Max Borghi.

What should we expect from Jonathan Taylor and the rest of the Colts rushing attack in 2022?

Based on the Colts’ RB usage over the last three years & adjusted for the extra 17th game, we should expect a total of around 436 carries to the RBs. If he remains healthy, Jonathan Taylor will be the bell cow lead back. Based on his per-game usage when starting and the Colts having a presumably slightly higher volume passing attack with Matt Ryan at the helm, roughly 300 carries is a reasonable expectation of Taylor’s workload on the ground. Meanwhile, Hines should see a bit of an expanded role, especially considering the lack of proven RBs behind him. Whoever wins the RB4 spot likely will only see occasional situational carries or garbage time work, barring injuries above them on the depth chart.

Jonathan Taylor: Back to Back Rushing Titles?

JT is projected to once again stake his claim as the best runner in the NFL. Even with a 32 carry volume and a .15 yards per carry efficiency regression, Taylor’s over 1,600 rushing yards and 16 TDs would have a strong claim as the best rushing totals in the NFL. He will still have a very strong workload on the ground, but with Matt Ryan under center, he might not be asked to do quite as much as in 2021 on the ground.

A season-long 34-yard run for Nyheim Hines … and a backflip for good measure!

Hines might not have been absent from the Colts, but with Carson Wentz at QB and Jonathan Taylor becoming the focal point of the Colts O, Hines’ role on the ground and through the air was reduced. However, with Matt Ryan, he is back to having a fun and dynamic complementary role as an RB/WR. Ryan helped take Cordarrelle Patterson from a journeyman role player into one of the best playmakers in the NFL in 2021. Hines is an even better runner than Patterson but should also be able to be utilized as a weapon in the backfield and out wide/in the slot.

Bringing In The Tasmanian Devil

New Colts RB Phillip Lindsay is a welcome late free agent addition to the Colts, bringing in much-needed experience amongst the RB depth. A 5’8 190lb RB, Lindsay thrives with a low center of gravity and good speed/agility to take advantage of blocking ahead of him. The former undrafted free agent turned Pro Bowl RB and 2x 1,000 yard rusher has had a regression in the last two years.

I was/am a big Phillip Lindsay fan. But there is some major homerism when it comes to his abilities. He’s an awesome RB running with the football. He can catch the ball some but I wouldn’t call him a threat or a weapon in the pass game. And he is a subpar blocker.

After an injury-riddled 2020 season splitting carries with Melvin Gordon, his 2021 season, he had no reported injuries but suffered his worst statistical season behind two of the worst OLs in the NFL: Texans and Dolphins. This was most notable in his yards before contact, where in Denver, he enjoyed a pretty stable 3.8, 2.7, & 2.7 YBC in his three seasons there but had only 1.9 YBC with both Texans and Dolphins in 2021.

I expect a small role for Lindsay similar to what Marlon Mack had in 2021, getting occasional snaps as a depth RB3 to help Taylor/Hines rest. He should be fully healthy at this point, and none of his injuries seem to be of great concern going forward. I expect a good bounce back in efficiency if his health is maintained. Should injuries occur ahead of him, he will have an opportunity to get more of a role & his presence could prove to be invaluable.

FIU is in good hands pic.twitter.com/Fnit0uMO4q

The depth RB battle will be fierce between Deon Jackson, CJ Verdell, & D’Vonte Price. Of the three, I have D’Vonte Price ranked the highest based on my pre-draft rankings and scouting reports from 2021 and 2022 drafts, followed by Verdell. However, it is still highly subjective who the Colts could favor most at this point in the offseason. Jackson is the incumbent. However, the Colts might not have been impressed with his 13 carries for 31 yards and a TD being his only production. Considering the Colts got two different UDFAs to compete with him, this should be seen as an open competition. How they perform in training camp and preseason will determine their pecking order and who gets the lucrative job of backing up Taylor and Hines and running behind a powerful OL.

The reason for the decreased volume has already been explained, but the efficiency? That is due to the Colts’ changes in run blockers this offseason. While much maligned in his pass protection, Eric Fisher was a strong mauler on the left side in the run game. Longtime Colts TE Jack Doyle was one of the best blocking TEs in the NFL. Zach Pascal was a very strong blocker at WR. Unfortunately, each of them is no longer with the Colts and replaced by rookies potentially.

Good run block from Bernhard Raimann to seal off his defender, which gives the HB a nice gap.

Overall, Raimann’s run blocking shows promise but does have some rough spots. pic.twitter.com/StW9bXsP3y

If he wins the LT job, Rookie left tackle Bernhard Raimann would be a worthy successor to Fisher with his strong run blocking prowess. However, he needs to beat out Matt Pryor, who is a solid but not as good run blocker, in my opinion. Alec Pierce is a strong outside blocker at WR to replace Pascal, but Jelani stepping in for Doyle could be a downgrade for inline run blocking for 2022. Woods is an aggressive and high-effort run blocker but still needs to clean up some techniques in that regard as a developing TE.

How about this block from Jelani Woods? Sheesh. pic.twitter.com/1PH3OClwsC

With the rookies potentially going through some growing pains/competition for starting snaps + the likely lessened effectiveness on RPO plays with a less mobile QB, a slight yards per carry regression makes some sense. However, this can partially be counterbalanced with Quenton Nelson and Braden Smith being fully healthy in 2022.

While the RBs take up a vast majority of rushing production, others can still get rushing stats. Matt Ryan isn’t exactly considered a mobile QB, but he will run if need be when under pressure and slide shortly after. No one will confuse him with Lamar Jackson, but he can run when things fall apart decently well despite his age.

I’m watching the full highlights again from the first game vs the Bucs. This is still the most unexpected play call in Atlanta Falcons history. Matt Ryan on the zone read run for the 2pt conversion. Usually he runs cause he has to. They designed this run for him. #Creative pic.twitter.com/Ivrf9wULOz

WRs and TEs typically take 8-13 carries a season, with the occasional end around or jet sweep used to keep defenses guessing. When healthy, Parris Campbell is the primary motion man to use in this way outside of Hines lining up wide, though the Colts have used Ashton Dulin or Michael Pittman Jr. in this way. Rookie WR Alec Pierce certainly has the speed and acceleration to be used too as well in this role, though he wasn’t deployed in this fashion in college.

Ballard also isn’t afraid to use the TE on a run near the goal line. He has called plays to get Eric Ebron & Trey Burton TD runs in the past, and rookie Jelani Woods has the size and speed to be a threat to do the same.

A $10 bet on Trey Burton to score a touchdown would have been good for $25 today. And him scoring isn’t all that weird. But him rushing for a TD? Yeah, we didn’t see that coming… #CINvsIND pic.twitter.com/it7rqvuqqG

Should he get the opportunity to, and he scores a TD like I project him to, Woods would potentially achieve something only one other Colts player has done before in franchise history: scoring a passing, rushing, and receiving TD all in the same season. The only other player to do so? Joseph Addai in 2009. 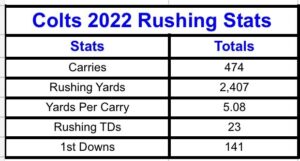 Combining all the individual rushing performances together, here is how the Colts 2022 Rushing Offense would rank based off of the 2021 NFL Rushing Stats:

Overall, I am projecting that despite a slight decrease in volume and efficiency, the Colts should remain one of the top 5 best rushing attacks in the NFL. With Jonathan Taylor powering the Colts’ diversified and electric rushing attack, Indy will have an offense that can beat teams in a variety of ways. Additionally, having a 55-45 pass/run split, the Colts’ offensive balance will keep defenses guessing throughout games.

After all, when push comes to shove, sometimes you have to: