As the season approaches and the Colts’ first game get closer to kickoff; This is the best time for a week one statistical prediction among the Colts’ offensive and defensive starters. The Colts have a tough week one matchup looming ahead with Seattle right in front of them. Seattle ranked 15th in team defense in 2020, 31st in pass defense, and 5th in rush defense. As a unit, it is plain as day how good Seattle is overall. As you begin to look deeper, you start to see cracks in their shield.

While the Seahawks also ranked as the 15th best scoring defense in the NFL, that is the least of their worries. Seattle’s pass defense was horrific last year, and you would not think that considering they acquired their shiny new toy in Jamal Adams before the season started. Even though the Colts are still a heavy run-oriented offense, do not be surprised if you see Carson Wentz trying to connect on the home run deep ball.

Nonetheless, Seattle’s run defense ranked top five in the league in 2020, and facing a team that is good in the trenches and at the line of scrimmage is a tough task. With their continued linebacker duo of Wagner and Brooks, Adams and Diggs leading the defensive backs, and Carlos Dunlap upfront; The Colts will have their hands full the whole game..

The Colts pass rush vs. the Seahawks OL will be an interesting matchup. On the one hand, the Seahawks have one of the worst interior pass blocking OLs in the NFL, but on the other, their blindside pass blocker was #2 in the NFL in pass block win rate, according to ESPN in 2020. Former Texans LT Duane Brown mans the Seahawks’ blindside, and his pass protection is still very impressive going into his age 36 seasons. The experienced vet will be going head to head with Kwity Paye for the young freak athlete’s first NFL start. While Brown has held out for the entire camp due to contract talks, he will play week 1 & the veteran knows how to prepare for a game after his 186 game experience in the NFL. Brown’s technique in pass pro is still as sharp as ever, allowing only two sacks and 28 pressures last year. He has quick hips to mirror his man even at this age and should give Kwity a strong test for his first NFL. I feel Kwity will beat him at times with his sheer athleticism, but Brown should be able to hold his well vs. the young rusher. Kwity will have a good rookie year, but 5 of his first 6 matchups are vs. LTs like Brown, Whitworth, Lewan, Stanley, & Tunsil. While Whitworth, Lewand, and Stanley are coming off of injury seasons, all are healthy now and have been top 10 OTs in the NFL for several years, especially in pass pro. This will be a huge test for the young pass rusher, and should he be able to beat some of those names to start his career; it will be a strong indication of greatness to come.

While Kwity will have the toughest matchup along the OL when he doesn’t stunt inside, DeForest Buckner will also have an interesting matchup. The Seahawks’ iOL since Max Unger left after 2014 has been brutally bad in pass pro, but they did make an interesting addition this offseason to improve that. Gabe Jackson was signed to the Seahawks and will likely be their new LG. Jackson early on in his career impressed as one of the top pass-protecting offensive linemen in the league in 2014-2017, only allowing three sacks in his first four seasons. Since then, he has allowed 10 sacks over the last three seasons, clearly regressing in the pass protection department. He did a solid job vs. Buckner last year with the Raiders, and so far, he is the only one who has shown the ability to slow down Buckner along the current Seahawks iOL. Unfortunately for the Hawks, Buckner has been able to slide to any position and stunt to attack any hole along the OL, allowing the Colts to pick and choose his matchups with ease. Should Colts Defensive Coordinator Matt Eberflus wish it (and he will), Buckner will get to attack the two weakest matchups on the entire Hawks offense: C Kyle Fuller and RG Damien Lewis. Fuller will be making his 2nd career start, and so far, in his limited snaps for his career has shown to be a porous pass protector. Damien Lewis showed promise in his rookie year in 2020, particularly in the run game, but was inconsistent in pass pro. Where he struggled the most was vs. long and athletic interior rushers, a description that fits the 6’7 Buckner to a tee. With his signature Swim move, expect DeFo to feast on the inexperienced blockers and even beat Jackson to get pressure on Russell Wilson up the middle. While Wilson might break contain from time to time and either scramble or deliver a precise throw on the run, Buckner should be able to get home and land a sack at least one time. With 5 career sacks in 8 games vs. Wilson back in his 49er days, it’s safe to say that Buckner is very familiar with Wilson.

On Pass rush downs, expect Tyquan Lewis to slide inside similar to the role Denico Autry filled before to attack Fuller/Lewis as well. While RT Brandon Shell exceeded expectations in 2020, he was a good, not great RT. In pass pro, he struggled at times with speed rushers in particular. Both Lewis and Ben Banogu are insanely quick with their first steps and have a lot of speed on the edge. While I do expect Shell to get the best of that duo, more so in the run game, I believe that there will be some rough snaps for him against them on the edge. Banogu gets his first sack since mid-2019, and Lewis gets 2 QB hits with his inside-outside versatility taking advantage of and confusing the Seahawks’ right side.

Last year the Seahawks allowed 48 sacks (t-5th most), 181 pressures (3rd most), and had a 27.3% pressure rate (7th most). While part of this is due to Russell Wilson holding on to the ball longer while the Seahawks’ vertical passing threats got open deep down the field, the OL as a unit was a bit underwhelming. With a few matchups that take advantage of the exact weaknesses of the Seahawks OL, the Colts pass rush should expect to maintain the average pressures and sacks given up by the Seahawks OL in 2020 at least (3 sacks, 11-12 pressures), even with the Seahawks improvement at LG in Gabe Jackson. Grover might get a pressure or two as well with an easier matchup whenever the Seahawks pass on early downs. Leonard also will be able to get one as he shallow zone/spies on Wilson and helps contain the elusive QB on a few rollouts and scrambles. Getting consistent pressure on Wilson will be vital, as well as containing him. It will require a mix of speed and discipline, but the Colts have the personnel to be able to make Wilson uncomfortable in the pocket.

The Seahawks will try to establish the run at times vs. the Colts but to little avail. The Seahawks OL is better at run blocking than pass blocking and can confuse defenders with RPOs and play-action because of Wilson’s mobility; however, the Colts D have seen these tricks before from Josh Allen, Lamar Jackson, and Ryan Tannehill 2x last year. Outside of one going against Derrick Henry while being banged up, the Colts defense held firm against all runners they faced in 2020, not allowing any other team to rush for more than 130 yards on them. The 2nd ranked run defense, led by 1st team All-Pros Darius Leonard at LB and DeForest Buckner at DT, should be able to contain Chris Carson and Russell Wilson. That would force the Seahawks to be one-dimensional and rely on their passing weapons to succeed. Kwity Paye should also be a strong presence on the outside, as his run defense skills are top-notch, and his athleticism is a huge mismatch to Duane Brown when in space. Should the Seahawks try to run the ball, they will be met with a handful of waiting Colts defenders ready to strike.

Upfront for pass rush and run defense, the Colts have the clear edge. However, in coverage is where the Seahawks’ weapons have an opportunity to run wild. With Xavier Rhodes out in week 1, the Colts will have to rely upon the duo of TJ Carrie & Rock Ya Sin at CB during Nickel sets. They can rely on Kenny Moore II on the slot, but it will be tough to match up with Tyler Lockett and/or DK Metcalf on the outside for the boundary. While the Colts Run a heavy Cover 3 scheme similar to what the Legion of Boom did, so these specific players won’t be shadowing the vaunted WR duo, the results haven’t been as consistent or dominant. Against one of the best WR duos in the NFL, particularly in deeper route concepts, expect the Colts’ CBs outside of Kenny Moore II to struggle.

Safeties will also be critical in coverage on the deeper route concepts, so Starters Khari Willis and Julian Blackmon will be vital to help out over the top. Willis is a solid overall Safety with good run stopping and pass coverage ability, though he lacks the same playmaking ability as some of the top safeties in the league. On the other hand, Blackmon is less consistent after his up and down rookie year; he started off as a potential DROY, then struggled in the 2nd half of 2020. The aggressive yet smart, turnover-causing, menace of 1st half Blackmon will be needed, not the bad angles, messy tackling, and blown coverage 2nd half Blackmon. Whichever version of him shows up on Sunday will be a big X-factor for the Colts and will be critical to stopping the deep ball/shift momentum with a turnover.

While both teams want to establish the run at a decent rate (Colts were 10th in rushing attempts in 2020, Seahawks were 17th), the way to beat each of these defenses is through the air. The Colts have the stronger defense in many phases of the game compared to the Seahawks, but the Seahawks passing attack is stout at attacking exactly where this Colts defense is weak right now, boundary CB. The Colts D has to get consistent pressure on Wilson and limit the big plays deep to succeed, while the Seahawks Defense needs to scheme up creative blitzes to attack/confuse Wentz and the few weak spots in the Colts protection plan. While the run games will have a role (definitely bigger for the Colts than the Seahawks), this game will rely heavily on the passing game. Should Carson Wentz avoid costly turnovers and be provided with good protection, the Colts could be able to pull out a win. But going against a team with as talented of a QB as Wilson, sometimes you can do everything right and still lose with his impressive escapism and arm talent. Wentz’s right arm might need to be relied upon to secure a victory if this game turns into a shootout. 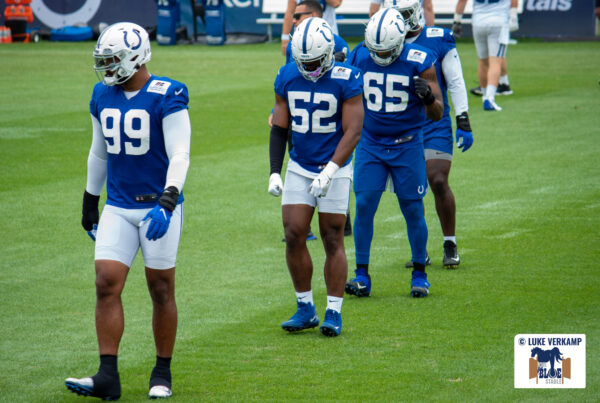 Embed from Getty Images    As the Colts face off vs. the  St. Louis LA…
LucasRobins 0 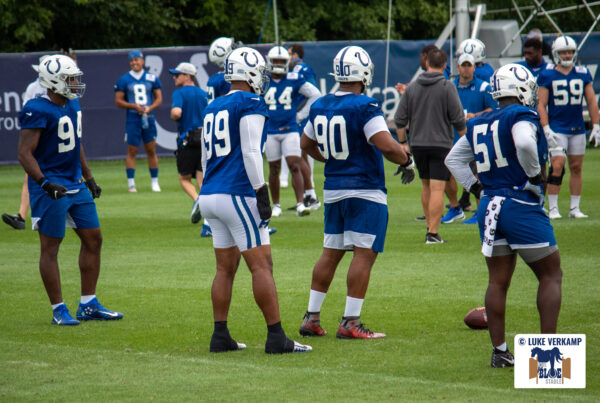 Meaningful football is here! No more waiting. No more preseason. The road to the Super…
Austin Isaac 0 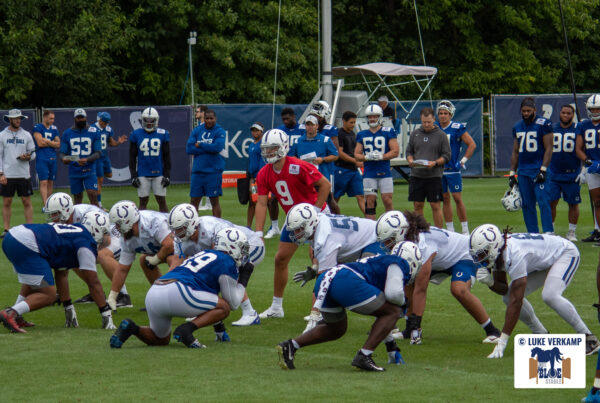 After enduring a long few months without the NFL, fans can look ahead to the…
SebastianBench 0