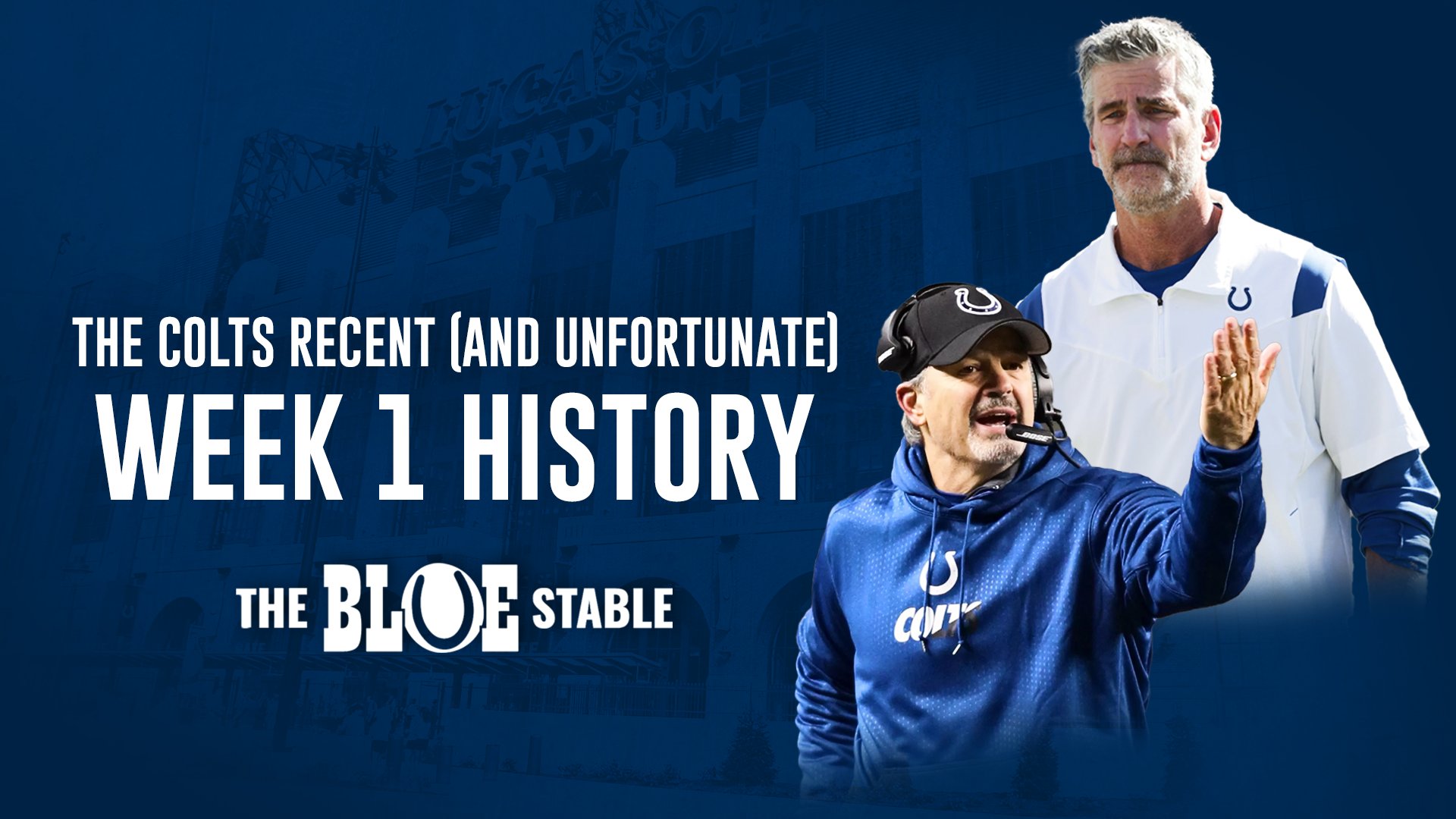 Early September is a magical time of year. We see schools back in session, apples begin to weigh down their branches, pumpkin spice lattes return to Starbucks, and most importantly, NFL regular season games.

The NFL’s opening weekend has slowly become a holiday in its own right. Broadcasting programs and various sponsors invest millions into advertisements, commercializing the catalog of games heading into the weekend. Teams set up contests and concerts around the stadium to entertain fans before the opening kickoff.

But with every joyous holiday, there is a scrooge.

The past has made it very difficult for Colts fans to appreciate the season opener. The team has suffered through eight consecutive years of opening day losses: enough to justify every “bah humbug” uttered heading into this season.

From game-losing fumbles to unparalleled collapses, fans can no longer anticipate anything other than the outcome. The team ruins the anticipation of a new season by digging themselves into holes. However, they have revised their approach this year to avoid facing the early uphill battle.

But will that be enough to change the narrative? The answer can be found by exploring their previous misfortunes and how they’ve prepared to avoid another week 1 catastrophe.

Finding a median for the preseason debate:

Preseason games are the closest simulation players will get before entering week 1. The results are insignificant, but the time spent operating in game-like scenarios can help players recover their regular season rhythm.

The Colts sat their starters out of the final preseason games in prior years, opting to choose their health over an effective performance. This is an elementary, often non-problematic, decision made among teams around the league. That is not the case for the Colts.

Mistakes occurred late in season openers from players who have all missed a sufficient amount of snaps in the preseason. Three great examples of this come from Laron Landry in 2014, Antonio Cromartie in 2016, and Jack Doyle in 2018.

Landry’s hard-hitting style of play had been catching up to him. He was in his last year of professional play and was limited from participating in offseason activities, including the preseason.

Former Broncos tight end Julius Thomas was coming off his best season yet. His size and shiftiness made him Peyton Manning’s favorite red-zone target in 2013.

The two faced each other in a 1v1 scenario nine yards away from the endzone just before the end of the first half. Thomas scored two touchdowns in the red-zone earlier. Relying on him to score and complete a hat-trick was foreseeable.

Thomas’ initial hesitation move throws off Landry’s physical momentum. He shifts too much of his weight during his first reaction, and by then, it’s too late. Thomas performs a quick inside slant and has Landry beat by three to four yards before catching the ball. The Colts end up losing 24-31.

Another case of rusted mechanics can be found during the Lions’ game-winning drive against the Colts in 2016.

Cromartie was an older cornerback who had experienced troubles in keeping up with more youthful receivers. On top of this, he dealt with a series of injuries during the offseason that prevented him from taking preseason game snaps.

Cromartie was ill-prepared by the time week 1 rolled around. And in the game’s most crucial drive, he was tasked to cover a 26-year-old Marvin Jones Jr.

As seen in the clip above, it did not end well. Cromartie was turned inside by Jones Jr.’s out route, resulting in a 22-yard gain and, eventually, Matt Prater’s game-winning field goal.

Simple mechanics are meant to be refined during the offseason and preseason, not the regular season. When starters miss time with the 1st team during simulated in-season games, small mistakes are more prevalent early and can lead to negative outcomes. This is why teams that experience brutal roster or staff turnover fixate on playing every player in the preseason, while teams who have found their identity can have some luxury in resting their players.

The Colts are one of the teams searching for their identity (if you want specifics, they’ve been searching since the fourth quarter of their third preseason game in 2019). They have been going against the league norm for the last two years.

However, this year was different.

Preseason snaps were distributed to the starters in order of a mixture of the positive qualities found in sitting your 1st team versus playing your 1st team. Colts had their starters play significant snaps for the first and last preseason games while taking a rest for the second.

One of the players that fans could see a massive impact prompted by the unique strategy is new quarterback Matt Ryan.

Adding a healthy and prepared quarterback:

Seeing Ryan’s name on the market this offseason was an unexpected blessing for the Colts. Trading for him has prevented another preseason without the offense’s leader on the field, a big change from the previous two years and the later days of Andrew Luck.

In 2017 and 2019, Luck dealt with injuries that forced him to sit out of preseason games. And in both seasons, his absence was followed by a different week 1 starter: Scott Tolzein and Jacoby Brissett.

Performances on both sides of the field in 2017’s week 1 were bad. However, it is hard to say that some were as atrocious as Tolzien’s.

He finished the day with 128 yards, two interceptions, and completed 50% of his passes in a 9-46 loss against the Rams. He has never played in another NFL game since then.

Brissett had spent two years on the team before getting the call to start week 1 after Luck’s retirement. And in his week 1 game against the Chargers, things ran more smoothly compared to 2017.

He threw for 190 yards, 2 TDs, and completed 77.8% of his passes. Yet the good on-field performance wouldn’t be enough to prevent the game from ending in heartbreak.

Brissett took the Chargers to overtime after a touchdown pass to T.Y. Hilton and a two-point conversion by Marlon Mack. The Chargers won the coin toss in overtime and closed the game out, beating the Colts 30-24. A year later, the Colts would find Chargers quarterback Philip Rivers as their 2020 starter.

Rivers was brought onto the Colts for a stop-gap veteran campaign. His intelligence and stamina at quarterback were the best fans have seen since 2018. The intangibles were all there, but COVID-19 protocols deterred a proper preparation for week 1.

The Colts visited the Jaguars for their week 1 game in 2020, a combination of the two recent curses set upon this franchise. And while the Colts had Rivers try and take down their division rival, the curses proved to be too strong. The Colts lost, 20-27, gifting the Jaguars what would be their only win of the season.

Rivers retired after the season ended, giving the Colts time to explore their next option. Head coach Frank Reich was keyed in on taking in a disgruntled Carson Wentz from the Eagles, so the front office granted him his wish.

During a summer practice with his supporting cast, Wentz injured his foot. It took him out of practice on the field with his new team for half of the offseason.

Successively, Wentz’s week 1 game versus the Seahawks showed a lack of genuine connection with his receivers. The throws that missed his targets were badly over or under-thrown, causing them to be nearly intercepted.

The Colts have clearly remembered the lack of preparation from their recent quarterbacks. Their approach for this season had some similarities to previous years yet will yield different results.

Ryan was able to stay healthy and train with the Colts throughout all of their offseason programs. He had enough time to adjust himself to the new offense and grow accustomed to his supporting cast on the field.

This week’s game against the Texans should be a display of how far Ryan has come with the offense compared to previous starting quarterbacks, all by participating in training camp and preseason.

There aren’t many things Colts fans are more used to than reading the weekly injury report novella. The list seems to follow the saying, “taking one step forward just to take two steps back.” Week 1 is no exception to these principles.

The Colts’ offense was struggling early against the Bills in 2015. The first quarter was boring football, void of touchdowns from both teams. The Bills started to heat up in the second quarter, but the Colts continued to lag.

Soon after, both T.Y. Hilton and Frank Gore, two players who were first string at their respective positions, left the game due to injury. With their two key offensive players missing, there was no chance the Colts could pull off a comeback.

Another time injuries occurred during the first regular season game was in 2019 with Devin Funchess.

Funchess’ injury is one of the most depressing storylines to come out of a week 1 game in the last eight seasons. He had left the Panthers in the offseason and joined a Luck-led Colts team hoping to rejuvenate his career. Instead, neither happened.

In an attempt to seal the game and head to overtime, Brissett threw a deep pass to Funchess. Funchess was unable to come down with the ball and landed on his side, breaking his collarbone. It was announced shortly after the game that his year would end.

But as we now know, this was just the beginning of a tough year for the Colts’ WR core.

The 2022 roster looks much improved compared to past seasons. The Colts have gone out of their way to select two wide receivers early in the second round (Michael Pittman Jr. and Alec Pierce), a running back (Jonathan Taylor), and re-signed their always-prominent third down back (Nyheim Hines).

Depth may still be an issue for this offense, but the free agent market still has several plug-in-play veterans that could make an impact. It’s not like the Colts are unable to access the market; they just don’t need to.

The offensive lineup they’ve currently built is sturdy enough at the top to not worry about what’s below. It’s a contradictive strategy that would create panic among the fanbase if another freak injury were to happen.

The recent week 1 curse has found its way to impact the game in any way possible. Is the lack of depth going to be the reason the streak continues this week against the Texans? It’s the only factor that shares a common denominator with other losses in the past. Or maybe the fact that Ryan and the first-team offense had enough time practicing together under a game-like atmosphere will break the curse.

Even with all that is known, season openers will continue to be an anxiety-inducing event for Colts fans. And until the score is in the Colts’ favor at the end of the 4th quarter, it will remain that way.

“Men’s courses will foreshadow certain ends, to which, if persevered in, they must lead. But if the courses be departed from, the ends will change.” – Ebenezer Scrooge