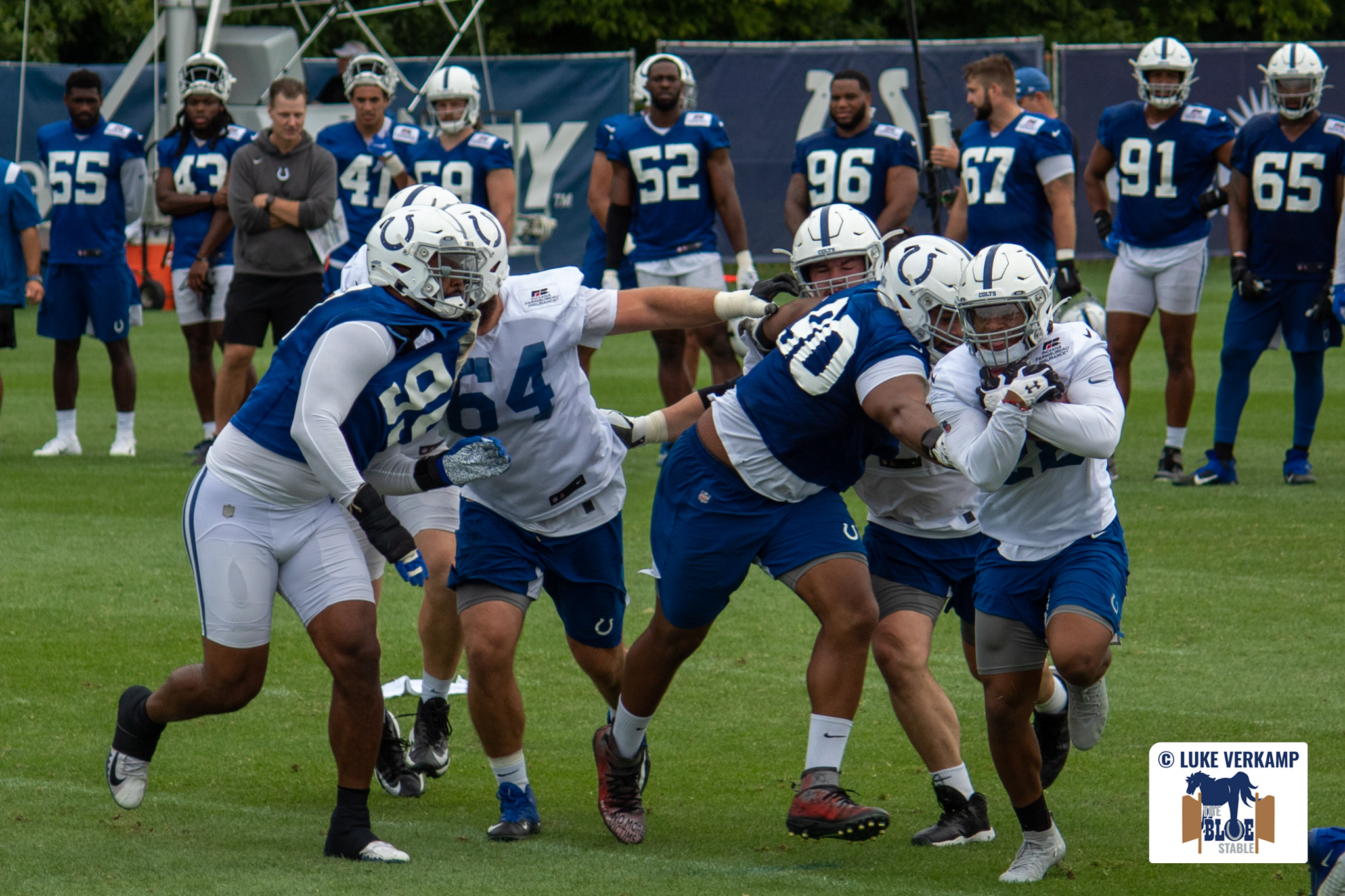 One of the greatest players I’ve seen in my lifetime is returning to Lucas Oil Stadium this Sunday. He has rewrote the NFL record books, is a Super Bowl Champ, and has well over a decade of clutch play in big games both in the regular season and playoffs. The man needs no introduction to Colts fans, who are very familiar with his work. After many years away from Indy, he is back. His name is Robert Mathis, the strip sack king, & certified QB Hater.

Wait were you expecting someone else? Some pretty boy QB who has had some of the greatest support systems in place in NFL History for nearly his entire career? Some softball slinging Californian who was the rare QB who wasn’t the top earner of the family and thus could afford to take a massive team discount for years to make the team building easier around him? Or were you expecting the all time leader in cumulative passing records because of multiple more seasons worth of  games compared to some of his closest competition?

All quips, slights, & misdirection aside, Tom Brady is coming back to Indianapolis fresh off of yet another Super Bowl winning season. Brady at the ripe old age 44 has been long overdue for regression, but you wouldn’t know it based on his play the last few years. It seems like the top secret TB12 formula is sustaining his performance. Doesn’t hurt that he has one of the best built rosters in the league to help him out, with all 21 other offensive and defensive starters from the 2020 Super Bowl run to help him. The pass protection has been phenomenal, allowing the lowest pressure rate in the NFL, Brady being the 26th most hit QB, and only being sacked 12 times in 10 games. The weapons at his disposal are top notch with Mike Evans, Chris Godwin, & Antonio Brown (who will be out but they have solid backups Tyler Johnson, rookie Jaelan Darden, and Scottie Miller) forming one of the best WR trios in the league, having Gronk again as well as OJ Howard & Cameron Brate at TE to create mismatches in the middle of the field, and a decent run game with Leonard Fournette leading the charge. Brady’s Bucs offense is 1st in scoring and 2nd in yards, and 15th in giveaways, dominating especially through the air (1st in attempts, Pass Yards, & TDs, with a 7.1 Net Yards per Attempt being 7th in the NFL.

Of course the Bucs Defense is also top 10 unit, ranking 9th in points allowed, 8th in yards allowed, and 5th in takeaways. The passing D has regressed due to injuries to their secondary exposing their depth Corners to bigger roles, but the Run D is the consensus best in the NFL. They’ve allowed only 784 rush yards and 6 TDs on 206 attempts for a mere 3.8 yards per carry. Ranking 1st in Yards, 3rd in TDs, and 2nd in YPC, the Buccaneers top tier run Defense feels confident in their ability to contain opposing RBs on the ground. However this isn’t the first or even 2nd time the Colts have faced a top notch run Defense, and in those games they had their 2 best games on the ground.

Running through whatever is in front of them. 🧱 pic.twitter.com/CLfANDdg2q

The last 2 times the Colts faced a top 6 run Defense, they had their best 2 games of the season. Vs the Jets they were able to run for 260 yards on 8.666ypc and 3 TDs between a strong efforts by Jonathan Taylor and Nyhiem Hines. Against the Bills last week, JT took over the game with a 185 yards performance on the ground and 4 TDs (+ an extra TD receiving). The Colts ground game has a lot of pride in establishing itself as one of the most dominant units in the game, with the now healthy(er) OL specialising in a variety of blocking schemes & plays up front as well as a strong run blocking group of playmakers in Jack Doyle, Mo Alie Cox, Zach Pascal, and Michale Pittman Jr. allowing the Colts to mix in plays like Wham blocks (TE pulling across the line) and get strong downfield blocking. This Buccaneers D’s strength is run D, but despite the strong season long stats, they haven’t had many challenges vs RBs on the ground. Zeke was their only top 10 and healthy RB1 on the ground they faced this season and that was all the way back in week 1. Since then they have avoided facing Darrell Henderson & David Montgomery, played Saquon Barkley and Antonio Gibson dealing with leg injuries, and faced Alvin Kamara (who is one of the worst RBs in the NFL this year on the ground) and Cordarrelle Patterson. They’ve also had the smallest sample size of any run defense, having the fewest attempts against them. This isn’t to say the Bucs run D is untalented, quite the contrary with Vita Vea, Ndamukong Suh, Lavonte David, and Devin White leading the unit. But they have yet to face a runner of Jonathan Taylor’s caliber this season (Zeke is only 4.5 ypc in 2021 vs Taylor’s 5.8), and the Colts rushing attack has been battle tested against similarly tough defenses.

The Colts passing O can also take advantage of the Buccaneers poor secondary, but there is one condition to that: pass protection. The Colts have several playmakers to attack the inexperienced secondary (most notably MPJ and TY), but if the pass protection doesn’t hold up it will put Carson Wentz in disadvantageous positions. The Colts pass protection has improved in recent weeks, but is still allowing the 8th highest pressure rate and Wentz being the 2nd most hit QB this season. That is bad news considering the Buccaneers are top 5 in both and are the most blitz heavy defense in the NFL. Thankfully Carson Wentz has been phenomenal at avoiding taking sacks, but too much pressure allowed will cause the O to stall out and limit its ability to keep up with the top ranked Bucs O.

Conversely the Colts pass rush itself will also have a tough matchup. The Buccaneers are the top team in sacks allowed and pressure rate, and the Colts despite recent success are still near the bottom in both on defense (30th in pressure rate and 20th in hit rate as well as 31st in blitz rate). Despite this difference the Colts have sacked QBs 23 times this season, only one less than the Bucs pass rush. The rush just hasn’t been as consistent as the Bucs’. However the Colts are doing so without sacrificing as many people in coverage. The Colts DL is a talented and athletic group that is just starting to see its potential (especially Kwity Paye). But this will be their toughest and most important task: getting pressure on Brady. With Robert Mathis watching on, nothing would bring him a bigger smile than seeing Brady on the turf consistently this game. After all, he knows more than most what it feels like to bring down Brady.

Despite Jonathan Taylor’s recent streak of MVP wins for the Colts each game for The Blue Stable, it’s time to shake things up. Taylor very well could have another strong game and literally run away with this award, but the Colts could also attack the Buccaneers weakest part of the team (secondary) leading to a big game for Wentz. I feel the Colts can attack the Bucs D in a few different ways providing that the protection holds up. But what is undoubtably the most important part of the game is not letting Brady settle into a grove. If given enough time, a smart veteran QB can pick apart a zone D. Tricking Josh Allen with disguised coverage is one thing, but to do it to Brady who has been in the NFL longer than iTunes has existed is another thing. Colts will need to force Brady to throw turnover worthy plays not give him time to find the soft parts of the zone. To do so the Colts need the pass rush to continue its recent streak. Namely Kwity Paye, who over the last month has emerged as one of the best young pass rushers in the NFL and the most consistent edge rusher on the Colts. Should he make a similar impact vs the Bucs, the Colts winning odds will certainly take a big raise.

It’s going to be a tough and hard fought game for the Colts. Both offenses should put up some impressive numbers against these respective Ds. But to beat Brady, the Colts will need to play a near perfect game at all phases. While they did do so vs the Bills last week, I don’t know if they will be able to do the same this game. This will be a one possession game and I could see the Colts or Bucs winning. But with the distinct edge in pass rush and pass pro as well as having the top passing O in the NFL, this Buccaneers team is a rough matchup for the Colts. I hope I am wrong and the Colts pull off the upset against Brady, giving TY Hilton his first career win vs him. But this is one of a handful of games that even with a near fully healthy Colts team, I don’t feel comfortable giving the Colts the edge against. Should the Colts win, expectations and hype will soar, and the entire city of Indianapolis will have a celebration on its hands. After all, beating Brady has produced some of the team’s most cherished memories. Even if the Colts lose, should the game be very competitive and down to the wire, the Colts can make a statement that they are almost there with the best of the best and will be a tough out for any team should they face us towards the end of the season. Playing against the SB champs gives teams the opportunity to make a statement, and the NFL waits in baited breath for what it shall be.